A while ago when hunting spare parts fodder on eBay for customising, I scrolled past a mixed small lot of damaged Star Wars figures, nothing special or so I thought, but something must have caught my attention and I scrolled back to it.

In the bottom corner of the picture was a rather sad looking vintage Luke Skywalker in his Stormtrooper disguise, as a last 17 figure, he’s rare and would normally be much sought after, however this figure was carrying the injuries of some seriously adventurous play. Missing a foot, an arm, a shave of plastic from his forehead and what seemed like 50 shades of ink. I imagined returning this little guy to some of his former glory so I purchased the lot.

When the figures arrived I gave them my standard welcome by giving them all a thoroughly good soapy wash, but scrubbing alone wouldn’t rid this Luke Stormie of his saturated psychedelic ink. I could have resorted to a variety of chemical soaks and rubs in an attempt to remove the ink stains however considering his post repairs painting, I decided to grasp this opportunity to re-invent him. Firstly, I sourced a loose right vintage standard Stormie arm from my fodder and applied the hairdryer treatment before clicking home into the Luke figure.

I moved onto tidying the ragged plastic of his chewed left leg using various grades of model files. Whilst I aimed to tidy this surface, I wanted to have leave some texture in which to provide purchase for the repair materials bonding.

When happy with his leg treatment, at the centre of its base, I pin drilled a few centimetres up into his shin. With a brass metal rod matching the drilled diameter, the length was deliberately cut longer than his standard leg as I planned to bend forward at a 90 degree at the ankle. Before shaping, I worked the rod into the shin to provide a guide as to where this bend would be needed. Marking this point, I then removed the rod and bent into shape. The rod was inserted again, this time to measure the length from ankle match the toe tip of his other boot. Snipping the rod by eye and using a spirit level to attain the final correct forward length.

The upward rod tip was dabbed with some superglue before re-inserting and working up into his shin for the final time. When secured in place, I also applied a little more glue where the rod protruded the leg to provide a little more strength. 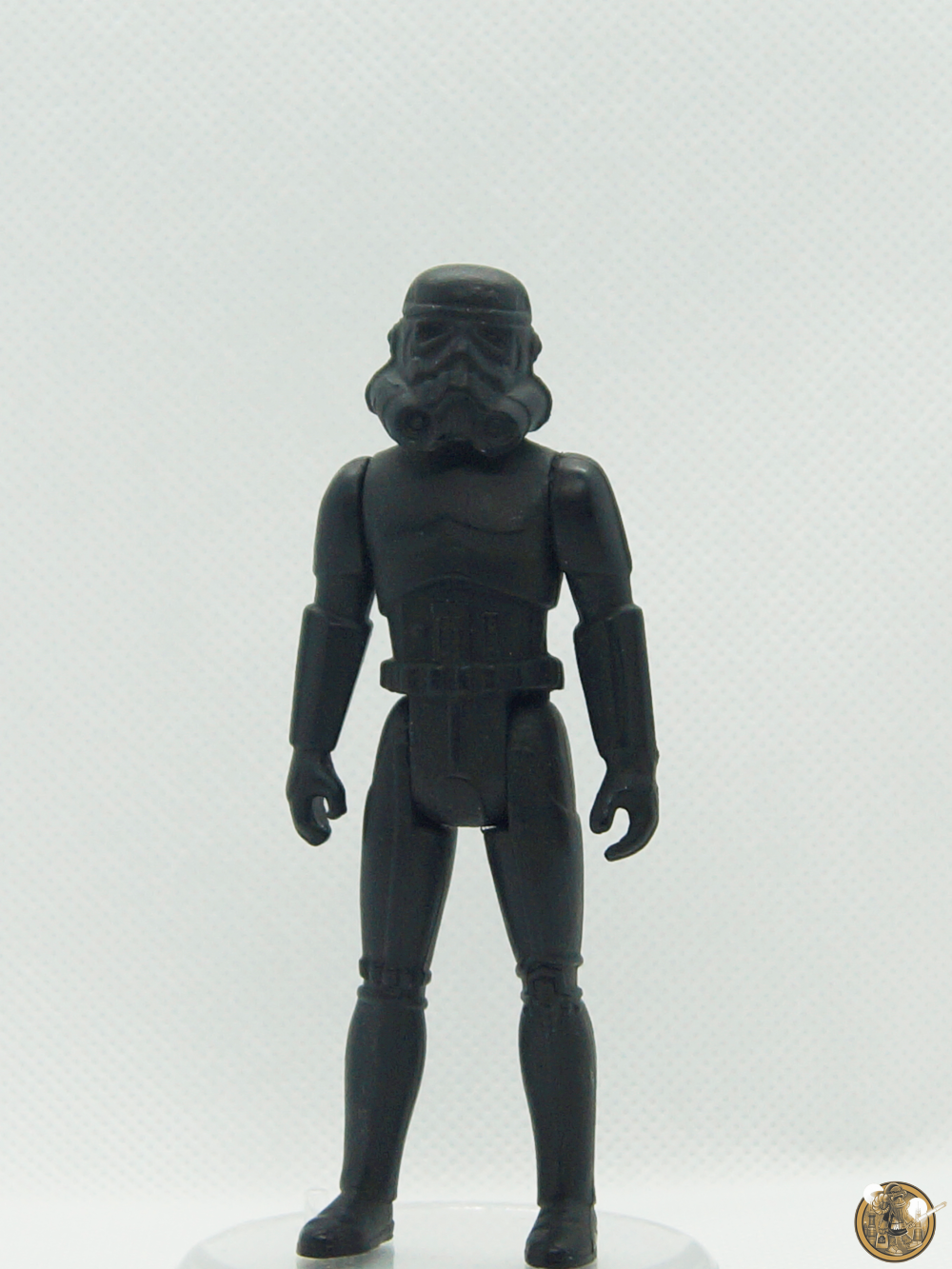 Working with some two part Yellow/Grey Milliput epoxy putty around the brass rod frame, I built and fashioned his new foot, when dry there was a little sanding to tidy.

The final repair was to his forehead, or lack of. Some more epoxy putty was mixed then pressed into shape on his head.

With repairs complete, it was time to deal with the unsightly ink stains, also masking the repairs. I opted to go for a new colour scheme in the guise of a Shadow Trooper. His head was masked with Tamiya modelling tape before blasting a few coats of black matt acrylic aerosol spray paint. I also painted a loose replacement replica helmet for him. When the body was dried, the masking tape was removed.

I may have taken the shadow element a bit too far as I also brush painted his repaired head with some black matt acrylic paint. Looking back, I wish I had restored to his natural golden locks, perhaps a job for the future. But still, a worthwhile repair and customisation.