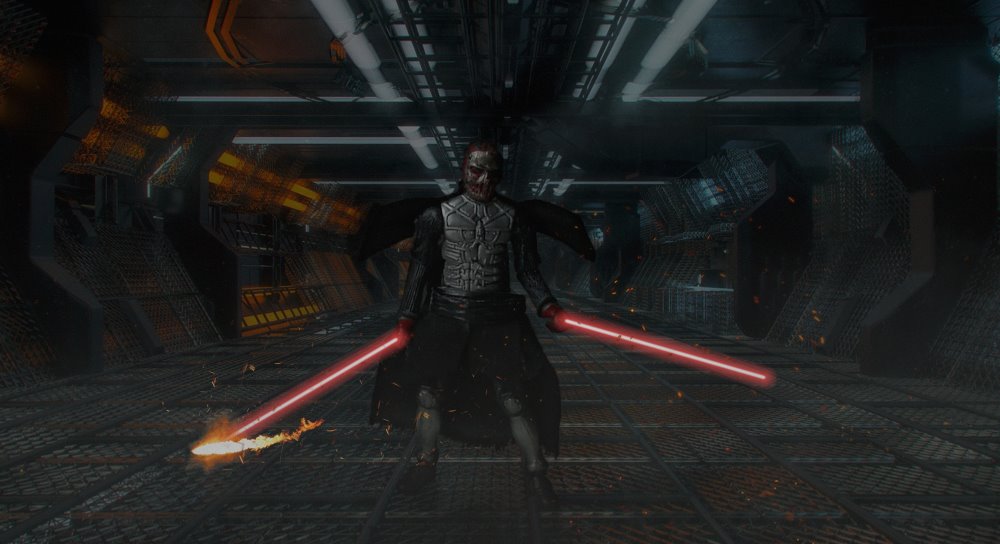 Recently we covered one of my Sith Lord customs which was inspired by the Old Galactic Republic,  an era which despite the periods advanced technology, wearing armour was still commonplace. The custom also demonstrated the benefits of various manufacturers/franchises, on this occasion G.I. Joe and Star Wars, sharing the 3¾ inch action figure scale. This customising article shares the same source inspiration, again utilising the interesting combination of G.I. Joe and Star Wars parts to create a unique cross-over action figure. As with most of my customs, the process follows an organic route of sifting through parts, placing them together, until I get a feel of where I want to go.  In this case, I had a second spare G.I. Joe Cobra Commander torso, unlike the previous part, this one thankfully included both sections of his upper torso.  I think the G.I. Joe Cobra Commander armour is an interesting and sinister look which is ideal for a dark force knight. While piecing the parts puzzle together I sourced a pair of arms, with an interesting mechanical feature on its outer-arm, the arms were disassembled into four parts which I put back together and pleased they fitted the torso really well.  It wasn’t until later, when identifying it’s donor materials, I discovered that the arms originally belonged to the torso.  This was either luck or the force, from a certain point of view. Taking advantage of the complete G.I. Joe torso, which in its modern form included the hips fitted metallic ball joints, I picked out a pair of G.I. Joe, Snake-Eyes, legs continuing the armour theme. The legs were based on an older G.I. Joe design whereby the legs are connected together by a metal ball jointed bar, and in its centre a small hook which would attach to a rubber band within the figures torso.  Despite these G.I. Joe parts hailing from different era’s they still shared the same mechanics, all that was required was loosening of the upper leg screws, removing the metal bar, plugging the legs over the new torsos fixed ball jointed hips then re-tightened the screws. Moving onto the head, I had opted for a Rum Sleg cast due to his interesting face mask which could be adapted to armour.  The head was painted matt acrylic red, followed with the eyes and hair in matt acrylic black.  Rum’s mask was painted with a metallic acrylic silver then treated with a black paintwash. For the hands, I picked out a spare pair of Saesee Tiin hands which were painted matt acrylic red/black to match his head and finished with a little silver for his cuffs/wrist armour. As Snake-Eyes enjoys his kit black, so to emphasise the armour, I painted a section of his legs with metallic acrylic silver followed again by a dark wash. 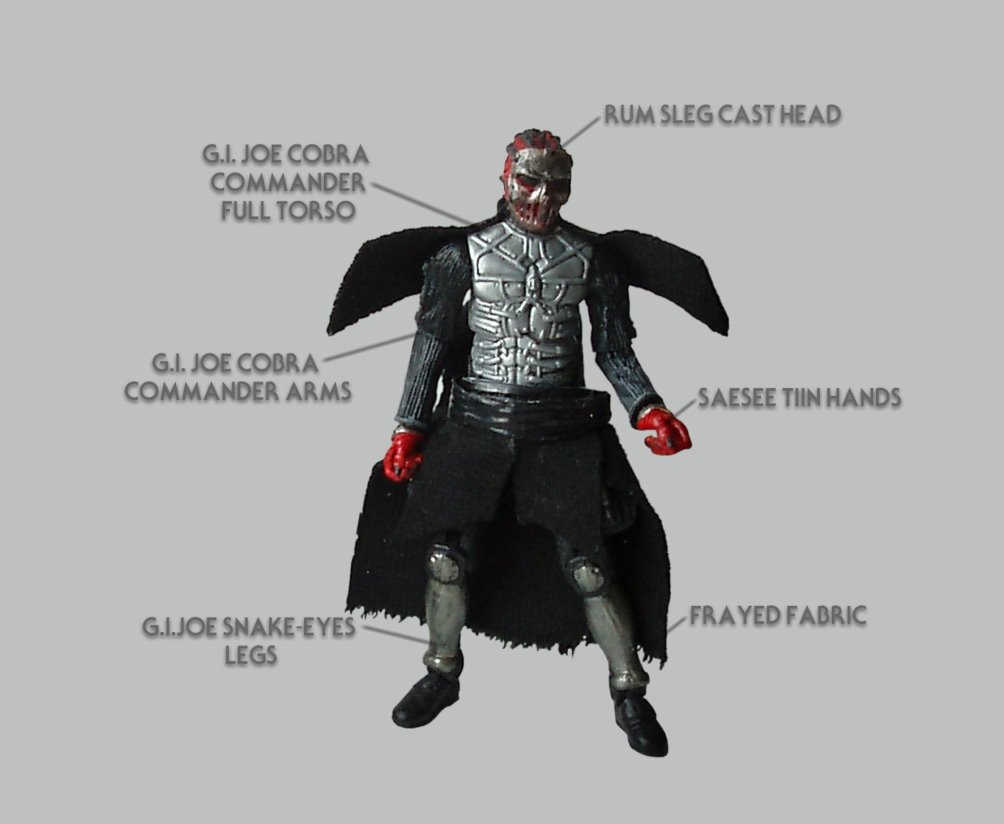 While the figures structure was complete, he was missing his obligatory Sith cape.  I wanted something different to a standard cape so using material purchased from a local fabric store, the same used on my other recent Sith custom, I measured a length from the figures waist to his calves.  When cut, I pulled threads from one end to achieve its raggedy appearance.  A further two pieces, this time from waist to knee, were cut.  Using super-glue, the larger piece was fitted to the figures rear and the smaller sections fitted to his front. A belt was wrapped around his waist then super-glued into position, this provided further support and covering for the fabric joints.  As you can see from the figures picture, the belt extends from the figures left side, this was a loop created for retaining his lightsaber hilt. Further interest was added by cutting two sections of fabric which were fitted across his shoulders and anchored within the backs accessory hole then fixed in place by super-glue. With the shoulder material dry, Rum Sleg’s head was then clicked into place, his tied dreadlocks providing the perfect cover for the capes joints and the finishing touch to this latest Old Republic Sith Custom.