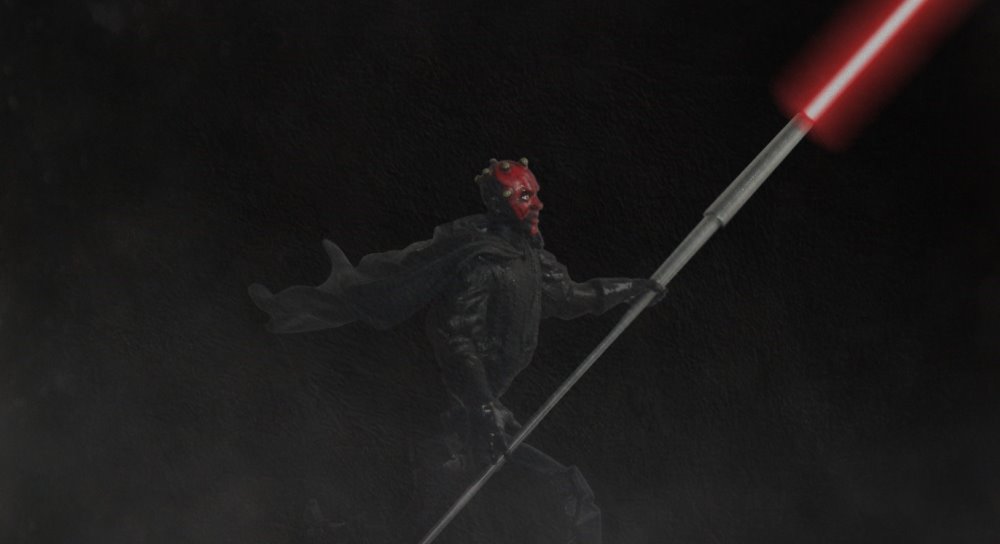 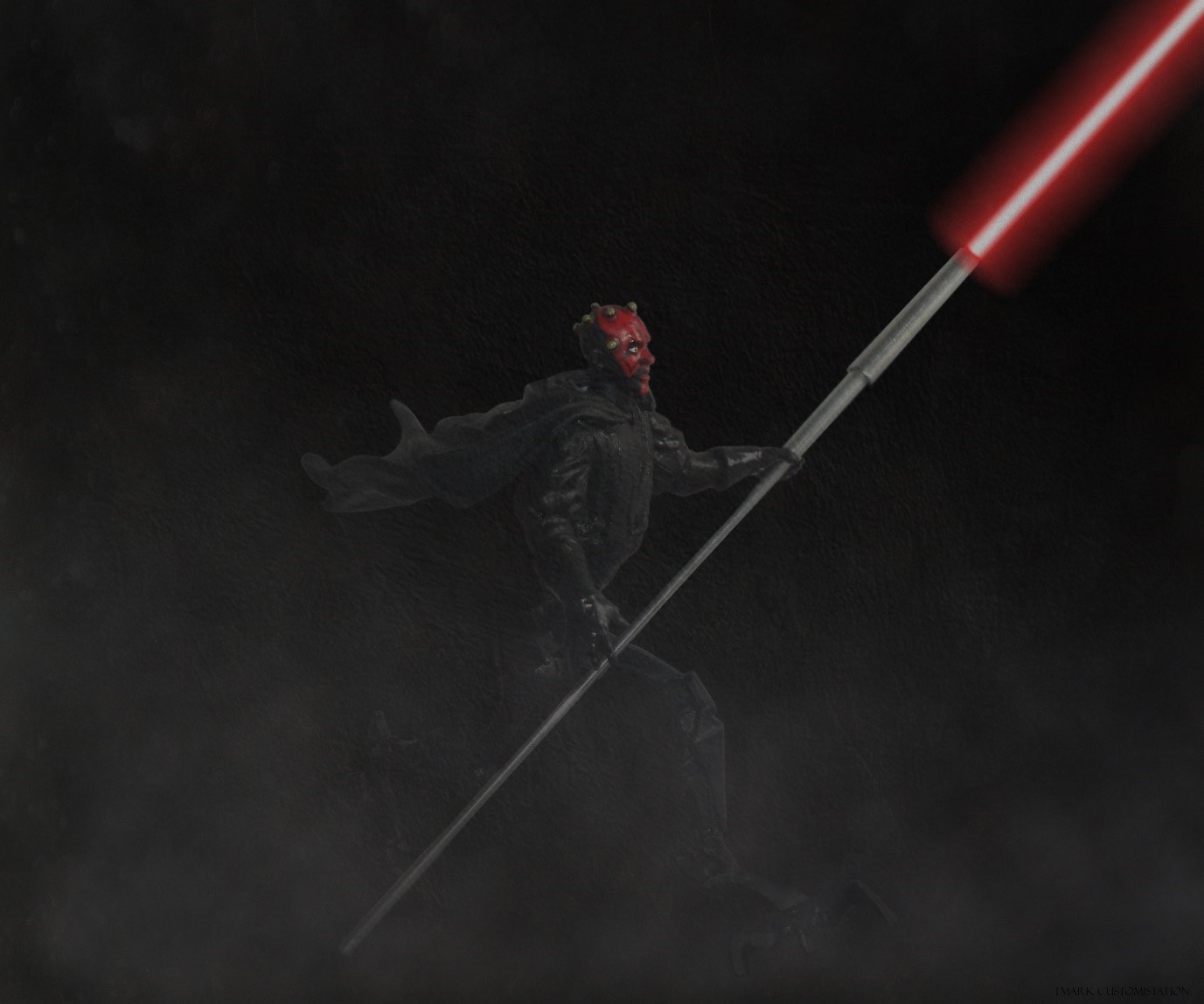 Within my fodder (spare parts) boxes I had a post Obi-Wan Kenobi duel Darth Maul, the two part figure with magnetic waist.  Having just the top half, I considered customising him towards his two pack Mission version spending time comparing him with various loose lower torsos, but couldn’t find anything I was happy with.

Then I remembered, this was a post duel Maul, I needn’t be restricted by legged torsos, I could rebuild him in his cybernetic guise as seen during his reprisal in The Clone Wars.  An interesting idea, but how could I realise such a look?  Well, it just so happened I had a plethora of General Grievous parts.  Selecting a Grievous figure whose waist ratio aligned closest with the top heavy maul, I cut the General around his mid-rift using my craft saw.

I thought of using magnets to attach General Grievous lower torso with Darth Maul’s upper, but elected to build towards a static fix.  This Darth Maul torso was formed with a harder plastic than his regular figures, likely due to the robustness required for his unique mechanics.

Slowly using my pin vice drill, I bore three holes, approx. 1 inch up and into Maul’s torso, followed by measuring and cutting of a thin metal rod into three sections of around 1 ½ inches long.  Each rod was dipped in superglue then fed 1 inch into Maul’s upper torso, this was then aligned with Grievous donor lower torso, the three rods were gently pressed into the lower torso leaving three pilot marks.  Placing tripod Maul to the side, using the pilot marks as a guide, I began boring ½ inch into Grievous lower torso.  The torso was thick but not as hard as Mauls, however I had to progress slowly and gently as any excess pressure or depth would breach Grievous hips and thigh cavity.

The exposed rods were dabbed with superglue and the flush Maul torso base was brushed with cement glue.  The rods were then guided home into Grievous torso with both torso pressed flush and bonded by cement.

Milliput Yellow and Grey two part epoxy putty was then built up around the waist until a flush and natural appearance achieved.  When everything was dry, I moved onto smoothly painting Mauls waist and new legs with an acrylic matt black.

He was looking good but a tad bare, so to spruce him up, I rifled through my boxes and sourced a Darth Vader cape, the firm plastic swirling cape from his 2002 Bespin Duel figure, I think.  From one Dark Knights duel to another, it must have been fate, duel of the fates even. Bad jokes aside, I placed the cloak on Maul’s shoulders and when happy with the position I drilled through the cape and into Mauls shoulders, once on either side.  Then measuring and cutting some more metal rod which fitted into Mauls shoulder holes and broke the surface by a few millimetres. The rods were removed, dabbed in superglue then slid back into Maul’s shoulders.  The capes holes were lined up again with protruding shoulder rods to get a feel for where the cape would rest in contact with Mauls shoulders. The cape was removed then liberally applied with superglue then returned to the figure, pressing the two rods through then holding in place for a minute while the superglue took hold. The small section of rod which still protruded beyond the cape surface was filled down using small hobby files, creating a flush flat head, a small droplet of superglue was applied and when try touch up with acrylic matt black paint.

I armed Maul with one of my homemade inventions, a Light Lance, firstly because I was experimenting with new force wielder weapons and secondly I could position this to support his balance.  Perhaps not my finest custom, but as always a lot of fun.