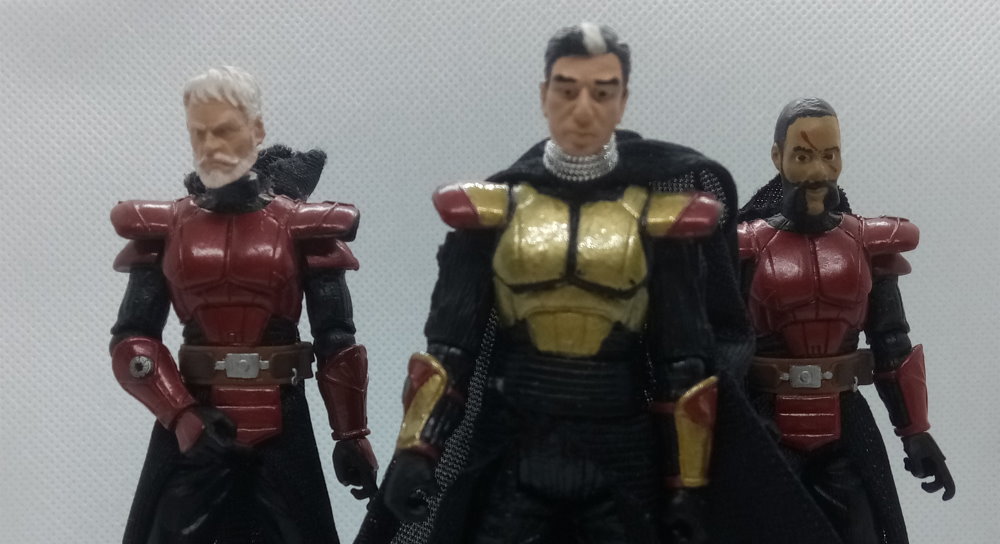 Following Disney assuming stewardship of Star Wars, it seemed reasonable when they set out to review the franchise’s deep, wide and sometimes tangled array of content.

Upon completion, the review had categorised Star Wars content into an encyclopaedia of two stables, Canon and Legends. Canon would provide the official template offering a concise and logical timeline to which new tales could align. Legends would become the larger of the two by encapsulating all else, including the much loved Expanded Universe. Thankfully from this rich back catalogue of material, some fan favourites, such as Admiral Thrawn, make their welcome pilgrimage from Legends into Canon.

As a fan of this saga, I was impressed with the Dark Knight packs which each contained a comic accompanied by two figures. I picked up the Imperial Knights Antares Draco and Ganner Krieg two pack and a loose Sigel Dare. While these characters operated closely with Fel, they only represented a small group of his Imperial Knight contingent. I wondered what other colourful characters might fill the Imperial Knight ranks and my customising imagination was piqued.

I began this customising process by picking up several loose Imperial Knights, which blossomed to a significant troop of around 70. As uniformed characters, my customising activity would be focused mainly on head swaps, hopefully providing a touch of colour similar to the variety of Clone personalities from the Clone Wars. Head swaps were completed courtesy of loose 3¾ inch scale Star Wars, G.I. Joe, A-Team, The Hobbit and cast heads.

The custom figures in this article are cast heads I painted except for the loose Mr. T head.

The first trio from my custom Imperial Knights features an interpretation of the Emperor-in-exile Roan Fel himself. For this I had a loose Imperial Knight upper torso which included both upper and lower cloaks. I paired these parts with a Darth Vader lower torso and painted both with metallic gold acrylic to invoke regality and differentiate from the other Knights. The lower cape was placed between upper and lower torso’s which were plugged together. I fitted a Darth Vader cape to the neck and teased the Knight’s hood through, this would maintain the theme with the additional cape promoting further grandeur. I enjoy repurposing and utilising recycled materials where possible and for this figure I had some silver gift tie which was whipped around his neck and glued in place. Finally an Indiana Jones cast head was painted including Roan Fel’s trademark grey hair streak.

Roan Fel is flanked here by two painted cast heads, an older and wise right hand man with a younger Knight carrying a scar from some recent action. 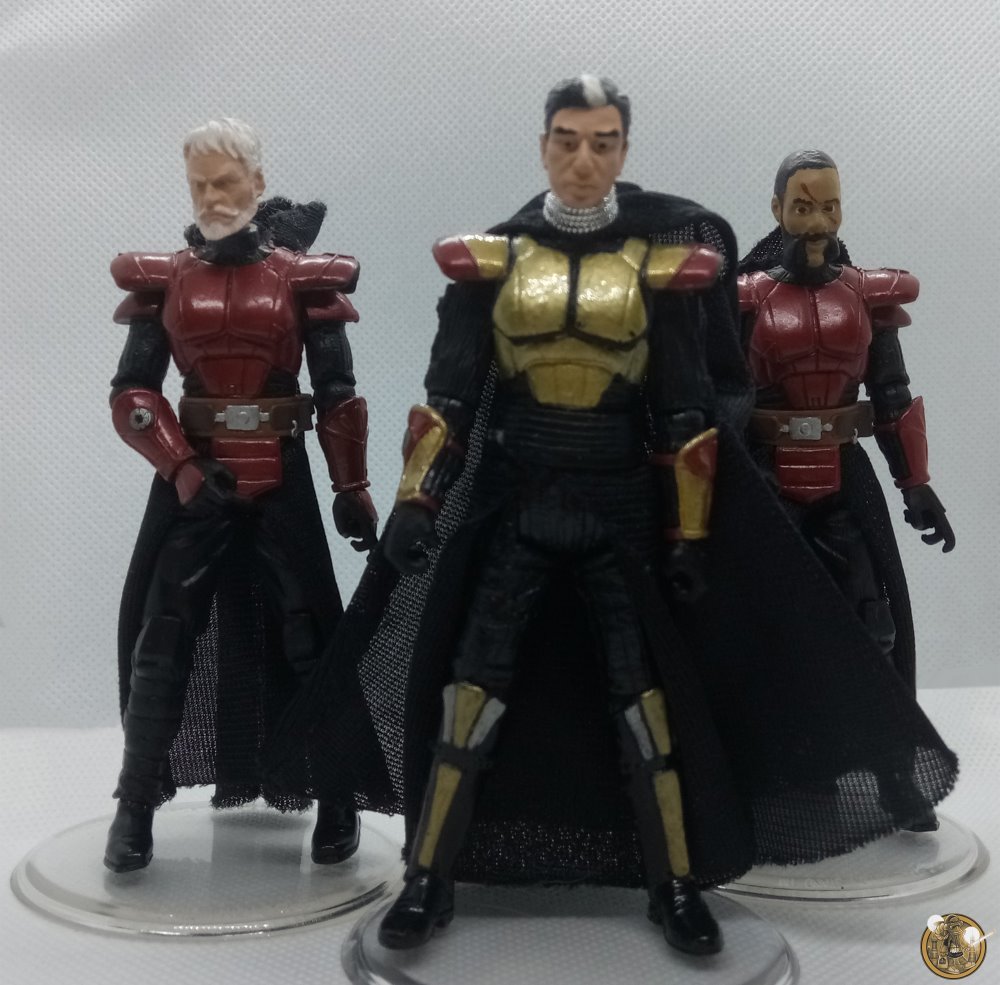 The next custom trio is again more of my painted cast heads. For me, painting eyes has always been a challenge and something I’m working to improve. True to form while painting the central figure, a John Cena-type cast head, his right eye went a bit awry, so I decided to consolidate by giving him a Captain Typho style eye patch. He’s flanked by fellow crew cuts, the twins, one of which fancies himself as Duke Nukem. 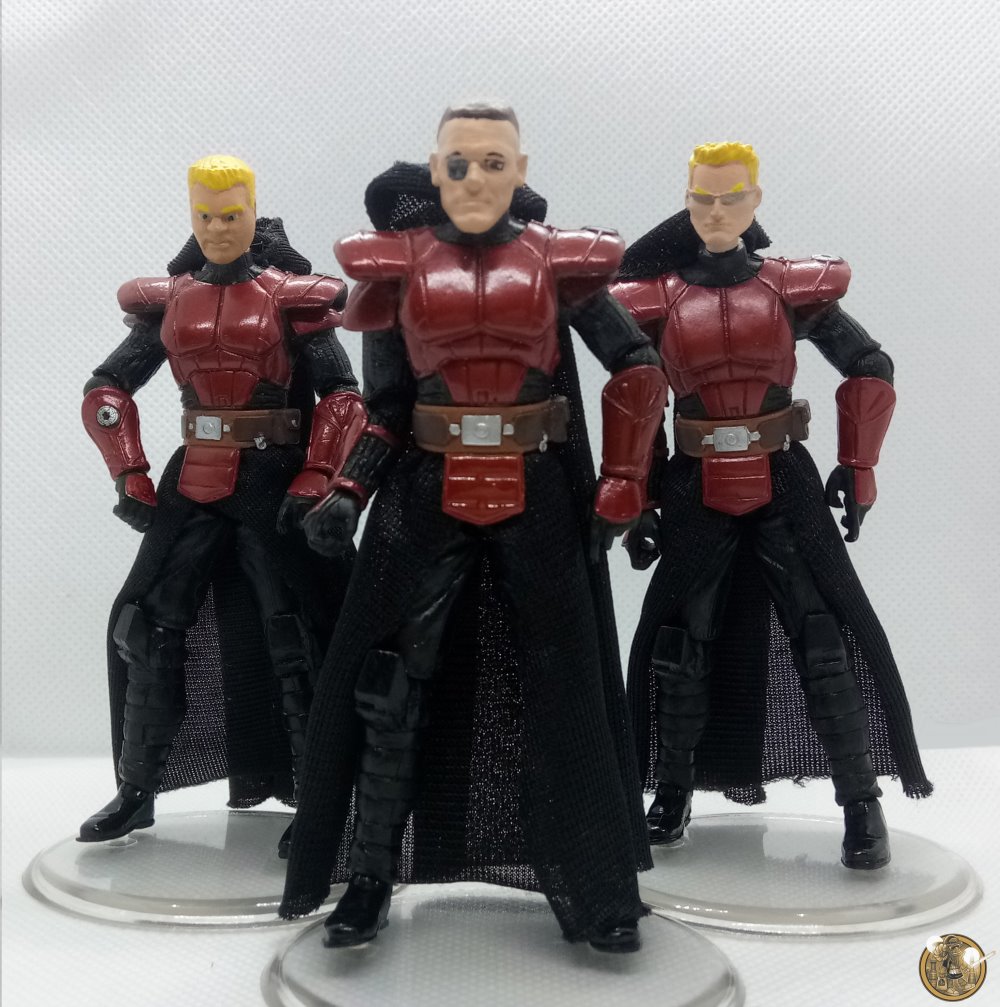 The next three are also my painted cast heads, on the flanks a General Zod type and a George Lucas. Up front I wanted to replicate the scar of Colonel Miles Quaritch from Avatar. Before painting I filed 3 scores on the side of his head. 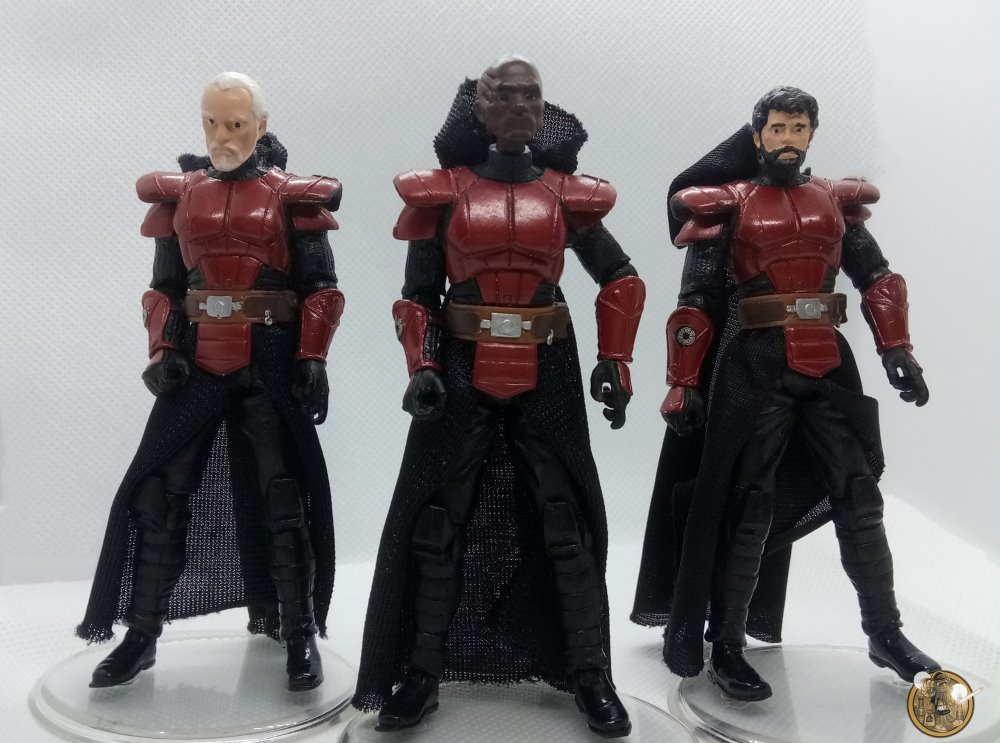 The final three figures feature a bandana adorning warrior with scars backed up by two Mohican topped Knights, one of which was a loose Mr. T which has been repainted with his neck removed and a hole bored to accept the Knight’s neck joint.