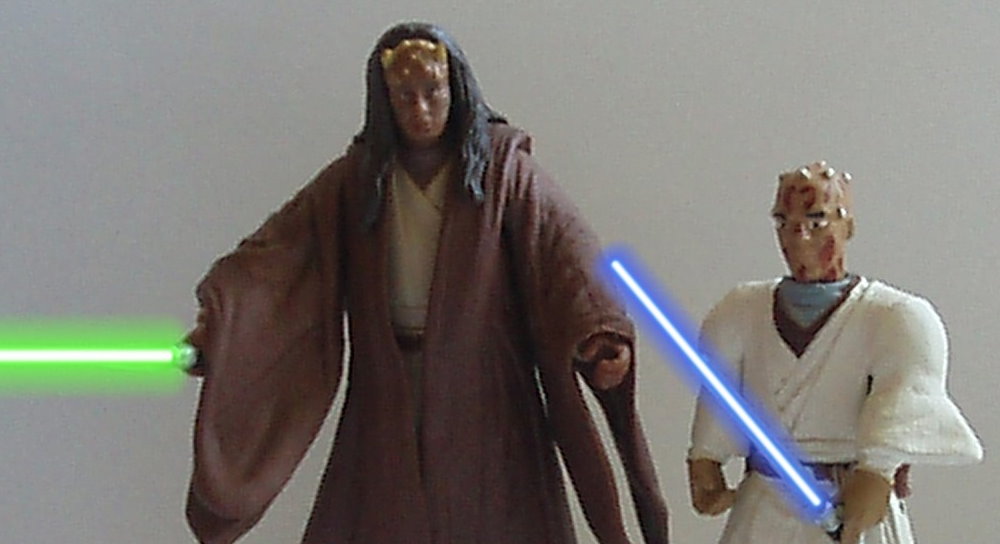 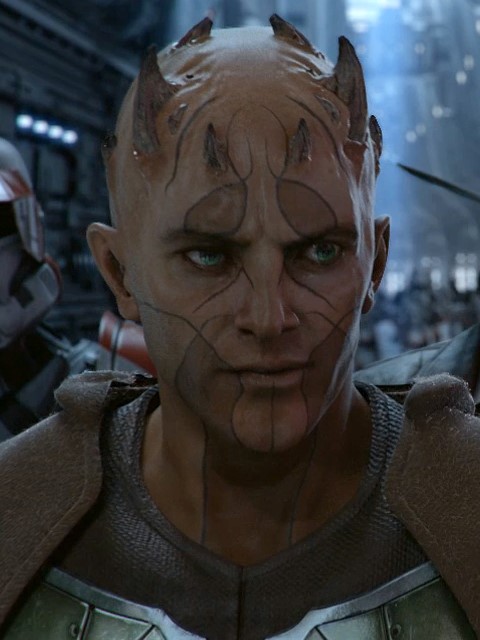 As a fan of the Old Republic timeline, I was intrigued by the Zabrak Jedi Master Kao Cen Darach from the 2011 Old Republic video game. We’ve witnessed other Zabrak Jedi Masters such as The Phantom Menace Eeth Koth and Attack of the Clones Agen Kolar; however with long hair, for me they loosely resembled their Zabrak Sith nemesis Darth Maul. Darach, albeit from an earlier chapter, shared more familiar looks while embodying the polar opposite of the Zabrak Nightbrother.

When I found a sad looking loose Darth Maul head, which had been painted entirely black possibly as a base coat for the previous owner’s unrealised plans, this presented an opportunity to create a custom Darach like Zabrak Jedi.

Continuing to work through my fodder to source component parts, I stumbled upon the lower half of a Bilbo Baggins figure from The Hobbit, an organic experience as always, this sparked my concept of blending franchise body parts and creating this figure as a Padawan.
A Jedi Knight upper torso was matched with a pair of arms, however with this figure representing a younger smaller profiled character, I uncoupled the upper from lower arms to shorten them. This revealed the elbow’s ball joints housed within the lower arm, these were clicked into the Jedi torso shoulder sockets. 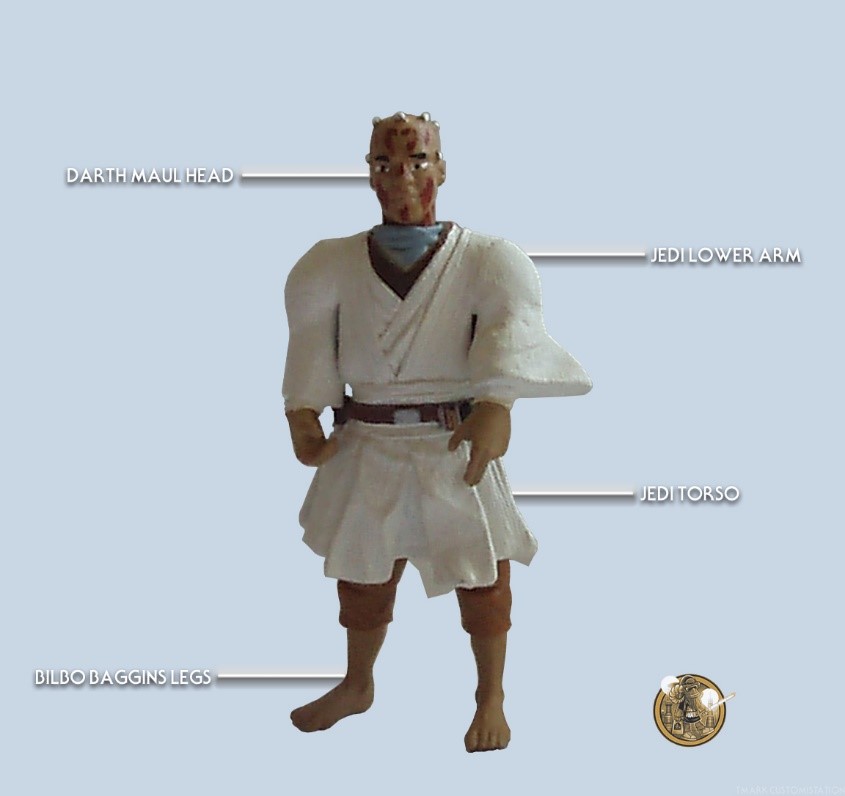 With the lower arm elbow joints now repurposed as shoulder joints, the profile appeared too narrow. To address this, the shoulders were bulked up by applying layers of Yellow/Grey Milliput two-part epoxy putty.

When cured, the upper torso was painted with a variety of coloured matt acrylics. Once the Jedi upper torso paint was dry Bilbo Baggins lower half was plugged in.

The loose head was mounted upon a cocktail stick using blu-tack as an adhesive and base affording unfettered access to paint. Pale flesh colour and earthy brown coloured matt acrylic paints were blended and a few coats were then applied. The eyes and horns were painted with white, black and creamy matt acrylics, brown fine tipped Sharpie permanent markers were used to apply his facial markings. The head was then sealed with a few layers of sprayed matt varnish. Once dry and blu-tack removed, the head was fitted into the upper torso. 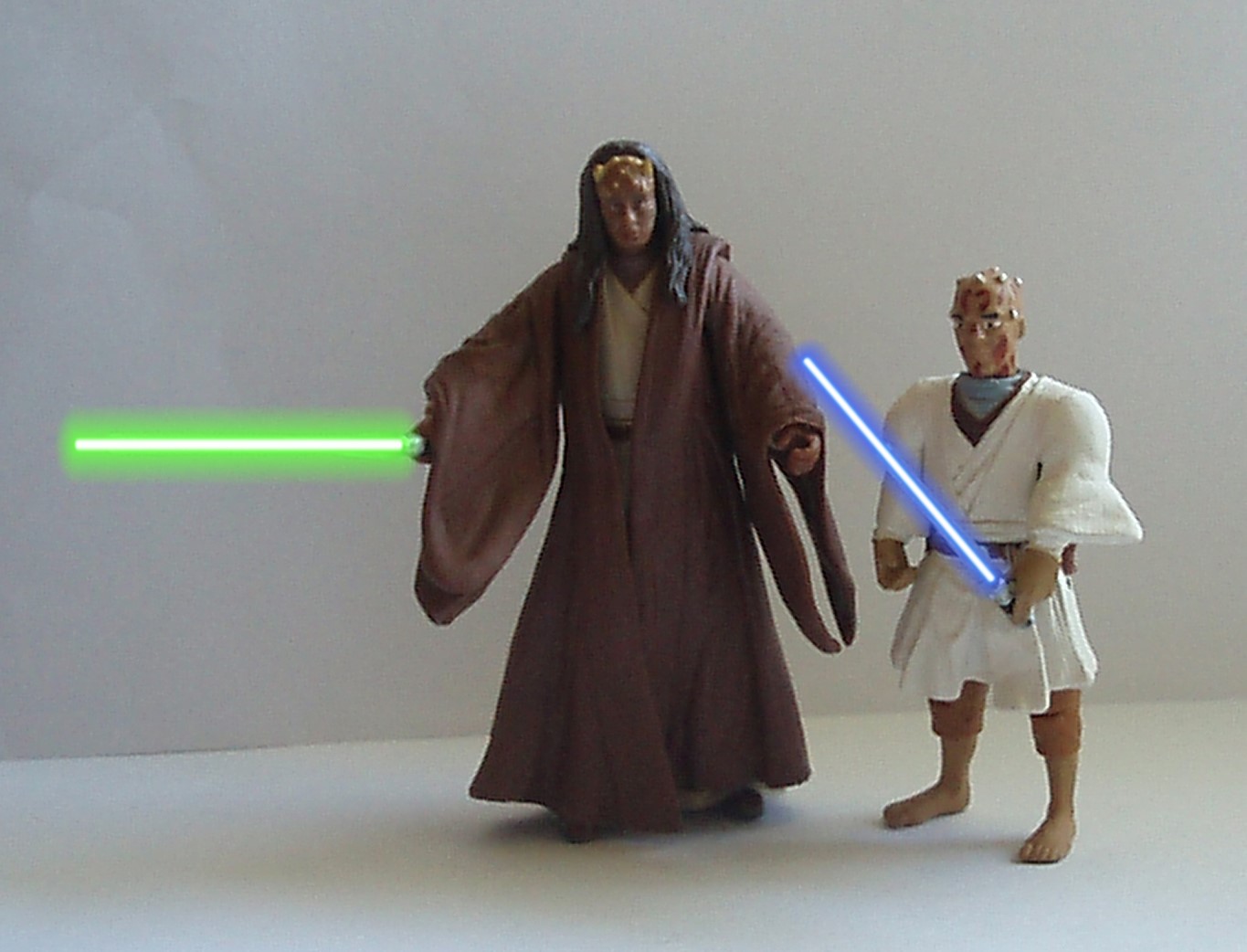 This project proved a mixed success. I was happy with the blending of parts, however a little disappointed with the facial markings and eyes. I’ve always found eyes to be the most challenging when customising with some better than others. From an artistic perspective I always feel my work could be better, however it’s this quest for perfection whilst perhaps impossible, motivates us to drive towards its attainment. That said, a great deal of satisfaction can be achieved when others enjoy the result.