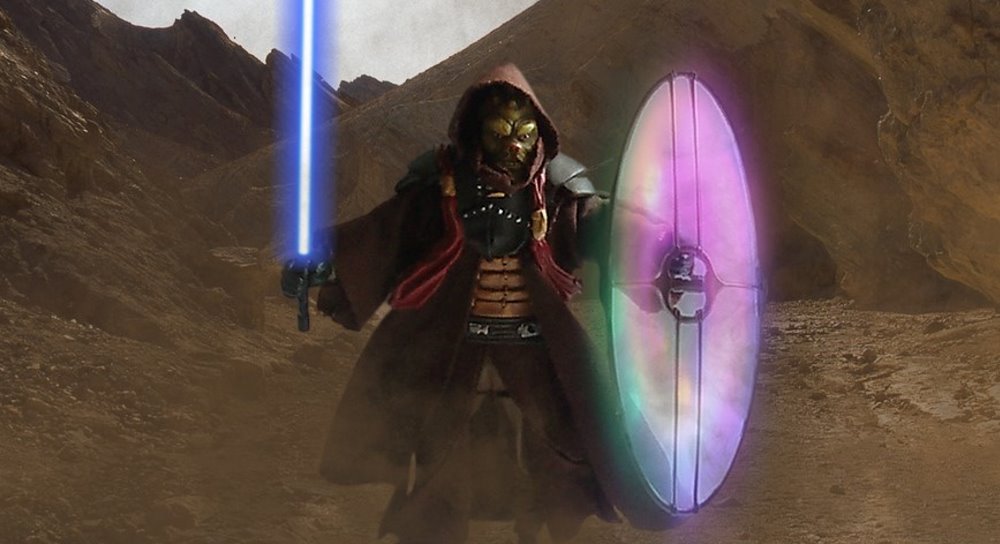 Within my figure spares I had Ak Rev’s drum beating buddy Umpass Stay, sadly missing both his hands and head scarf.

I considered converting this Nikto from musician and hired hulk into something adventurous but felt his standard crouched legs provided limited potential, so I made the decision to separate his upper body from his lower torso and legs. 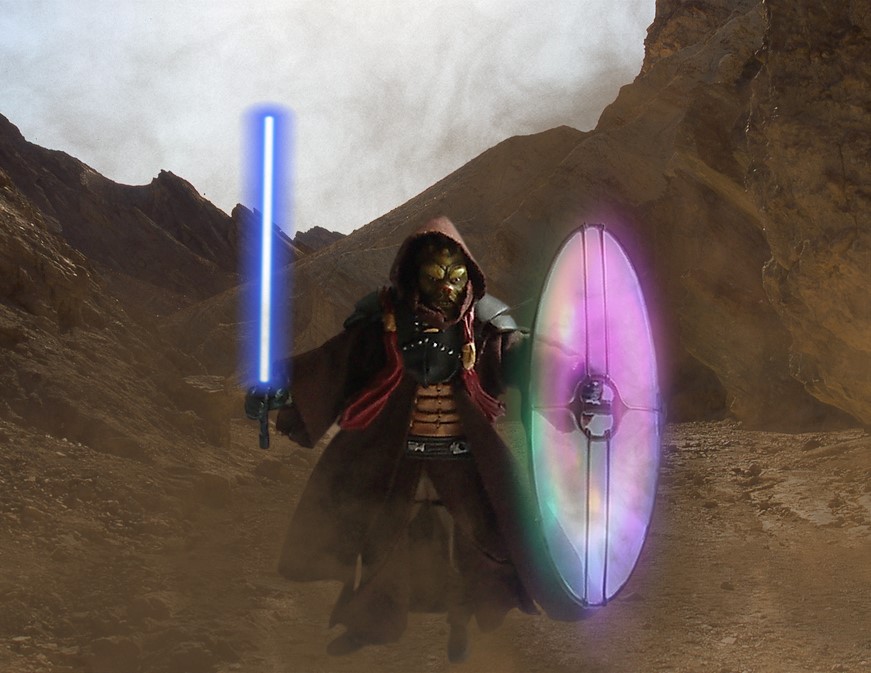 Carefully removing his shoulder guards with attached plastic formed fabric and stowed away for later.  The join between his upper and lower body were heated using my favoured hairdryer method, working the joint several times until the bottom finally unplugged from its upper half.

With upper body freed, I worked through a series of spare lower torsos with legs, comparing the waists of these against the upper torso for suitably sized matches, finally settling on the set which can be seen in the pictures.

Unfortunately I am unsure which figure the donor waist and legs belong too, but they looked just right with the added bonus of matching the figures colour scheme removing any need for painting.

Any time saved from avoiding painting proved short lived, as I opted to employ another pastime/modelling skill, sewing.  Digging out some Obi-Wan Kenobi spare capes, I got to work on designing something individual for this figure.

Removing the hood from one of the capes, this was folded in half then sewn along one side.  This was then wrapped around the lower torso leaving the opening to the front and glued into place with the help of some super glue and a Jedi belt.

When the lower cape was dry, the upper torso and lower torso were plugged together.  Being a hoarder and avid recycler, I had kept hold of the hood which was earlier removed from the lower cape.  Umpass head was popped off and a small hole was made in the hoods tip which was fed over his necks ball joint.  With the hood facing upwards and outwards I couldn’t help myself but make a small cut, this provided movement and some symmetry with his lower cape.  Umpass head was then clicked back into place locking the hood in position.

My thought process for this adaptation was formed from the Nikto’s natural desert like habitat, I felt a face covering would prove a beneficial piece of survival wear for potential sand storms.

As this figure was not a post Anakin duel Count Dooku, I would have to find him some replacement hands.  With Umpass original hands being quite large, I searched my loose hands for a pair of oversized 3 ¾ inch hands, luckily sourcing, though again I have no idea of their donor.

With new appendages clicked nicely into place, I then fitted an unmodified Jedi cape to the figure followed by the return of his shoulder armour atop of the cape.  His mixed attire emulating an Old Republic Jedi which was further enhanced by his upper torso’s chest armour.

During this time working on customs, I was also dabbling with alternative Jedi weaponry customs, which I might share with you in a future article.  In this instance I opted for a stock standard Gungan shield which I thought might provide some added interest.

With this new custom complete, my thoughts transferred towards his possible backstory.

With echoes of Toshiro Mifune’s Yojimbo, or latterly Clint Eastwood’s Manco, our Nikto travelled the Galaxy’s wilderness with no final destination, his journey mapped only by the needs of those he encountered.  A nomad who considered himself no hero, however his deeds betrayed this self-perception.  Admired and feared in equal measure, loved by those he defended and despised by those threatening their harm.

Life had not always been this way, his earliest memories were as an abandoned orphan, a street urchin, surviving day to day until a chance encounter with an elderly human, a kind and wise human, a traveller, and life was good, life was simple.

His human travel companion shared little of his past, however small conversations pieced together over their years together, the force-strong protégé came to understand that his teacher was a member of, a Master in, something called the Jedi Order.  Completing missions further and further afield into the deepest most depraved recesses of space for longer and longer periods, he came to the believe his service was needed most here than in a Galactic Republic he considered ‘old’.

While accompanying his Master, the Nikto grew both in size and force abilities.  Visiting many farms, villages, towns, planets and protecting those in need from oppressors while only accepting their welcome, warmth and whatever food could be spared as payment.

One such journey with his Master led them onto a small planet called Naboo, where they met with a Gungan Boss in the midst of a tribal dispute with a neighbouring Gungan clan.  The Master spent much time mediating peacefully between the Bosses until a mutual understanding was reached.

In their gratitude they bestowed the Master with a gift, an energy shield.  Normally the Master would not entertain such a grand gesture, however this was considered no simple gift, this was demanded by their Gods, so it would be inappropriate to refuse.  The shield was considered symbolic, mirroring the nature of the Masters work which averted use of offensive weapons.

During post Naboo adventures, the Master encouraged his student to develop and embrace techniques combining both Lightsaber and Energy Shield, something the young Nikto became uniquely proficient with.

Much good was enacted by the unassuming pair, until one day when the apprentice ascended to Knighthood whilst his Master became one with the force.  Long prepared by his Master for this crossroad, instead of sadness there was fulfilment of destiny, not in physical but a spiritual sense.

Beginning his personal journey, the Nikto would continue to lead an unassuming existence guided by his moral compass and charted by his good deeds.