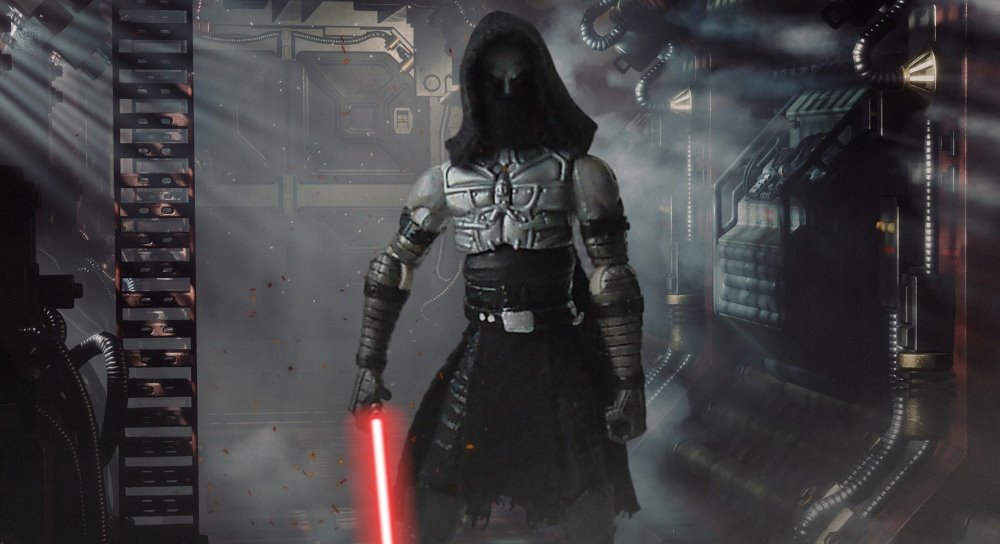 Half way through a new trilogy interlaced with stand-alone stories, Star Wars fans have never had it so good.  At the risk of appearing greedy, one story I would love to see explored on the big screen is the Old Republic.

Video gamers and graphic novel readers have enjoyed some experiences from this Expanded Universe era, set several millennia prior to the Galactic Republic as witnessed through the original trilogy and prequels.  With a depth of history but shrouded in mystery, The Old Republic was a civilised time beset by the same old problems. 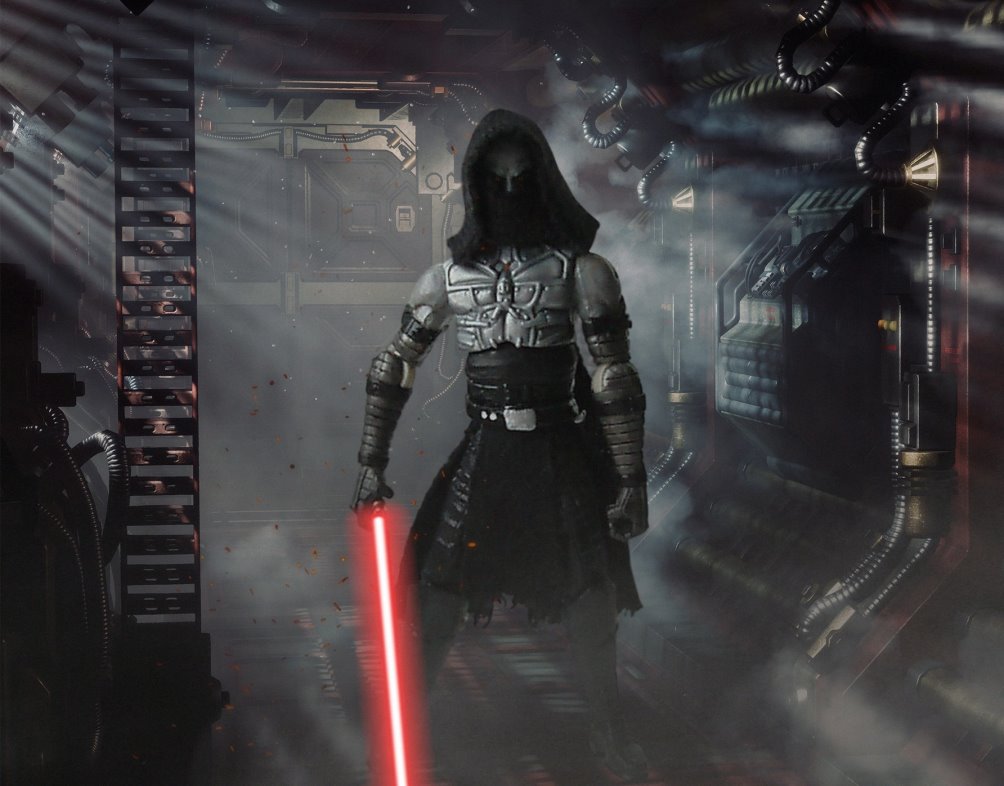 Despite advancement of technology the culture still embraced older traditions, reminiscent of real world Knights, Jedi of the Old Republic adorned protective plates as part of their dress.

While this armour might have provided some protective properties deflecting energy such as rogue laser blasts, this could not be relied upon when confronted with the penetrative power of a lightsaber as wielded by their Sith nemesis.  However, with their Sith foes long thought lost to the stars, the Jedi could be forgiven for believing this dark cult was no longer posed a discernible threat.

Whatever their reason, the knights armour provided a rather cool twist and *spoiler* when the chapters protagonists re-emerge, the Sith are rocking some armoured bling of their own.

Inspired by this period I wanted to create a Jedi Knight or Sith Lord of the Old Republic.

I tend to follow an organic process by raking through my fodder and piecing parts together, allowing them to evolve towards something creative and unique.  The recipe for this custom formed quickly and is testament to 3 ¾ inch figure franchise cross-overs.  I had a Star Wars Darth Vader lower torso with legs and a G.I. Joe Cobra Commander (armoured) upper torso, although I was missing section to connect the two.  I found parts from a Han Solo figure, which I think was from one of his Bespin Capture figures.  The Han Solo parts was a two part upper torso split into a bottom and top half, the lower of which proved a perfect partner with added bonus of its connecting plug fitting neatly into the G.I. Joe’s upper torso. 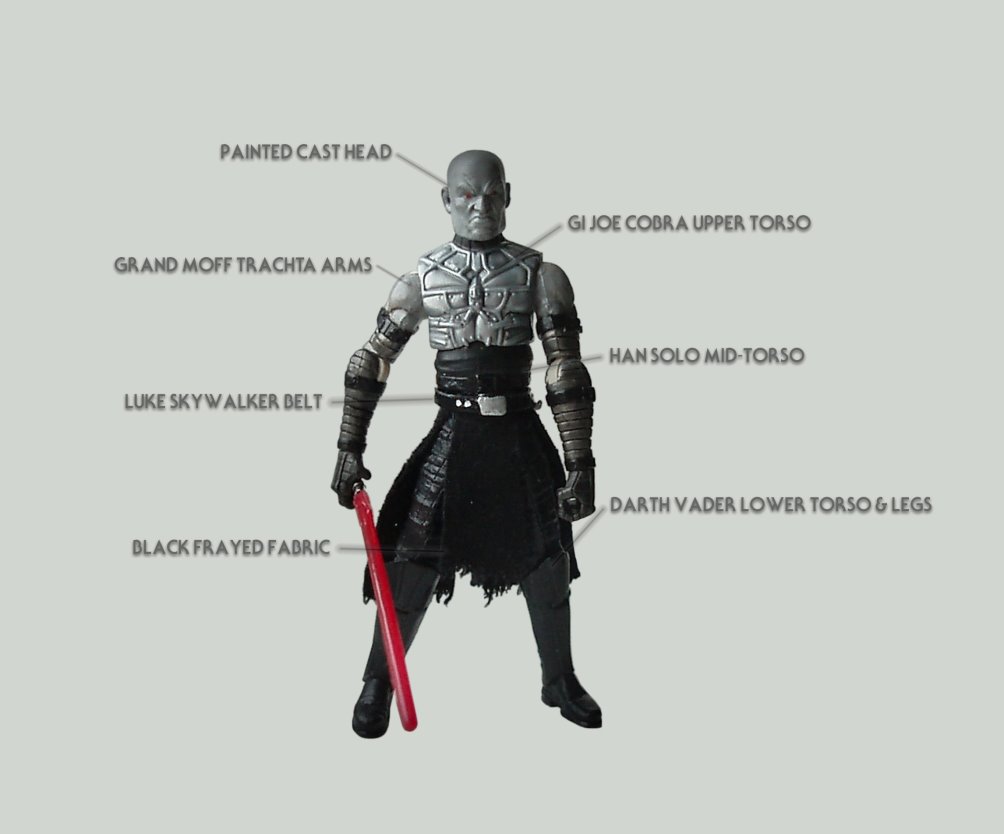 Before locking the Solo and Cobra upper and upper torsos together, I painted the Solo part with a matt black acrylic.  I also sourced a pair of loose Grand Moff Trachta arms which just required a wee joint shortening, then fitted nicely into the G.I. Cobra torsos arm sockets.

Previous to working on this figure, I was becoming more adventurous with my fabric use and didn’t want to be confined by Hasbro spares such as the size of Darth Vader’s capes and the cost would have been prohibitive.  So I spent some time scouring the internet and reaching out to customising friends in an attempt to identify the material used by Hasbro, unfortunately to no avail.  Unable to identify the material, I purchased a few materials on-line and in the process discovering on-line and off-line are worlds apart with the material being no use for my custom projects.  To avoid further time and expense, I headed to a local fabric store and found a decent length of suitable material and for a good price in their off-cut bin.

Cutting a few lengths of this material I formed a makeshift lower cape and being a fan of Darth Nihilus unkempt robes, I frayed the hems and was delighted with the look.  These individual sections were attached to the front and back of my custom figure then secured in place with spots of glue and a belt.  The Han Solo/G.I. Joe upper torso was then fitted to the Darth Vader lower torso and legs. 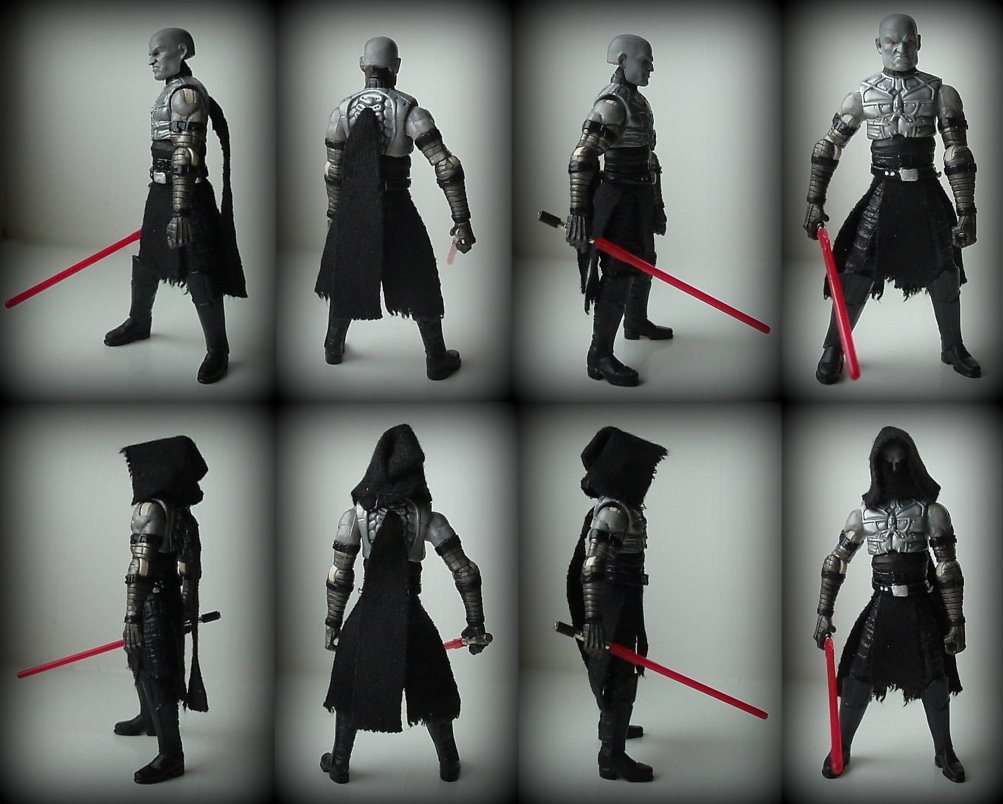 The G.I. Joe upper torso had a hole in the centre of his back between his shoulder blades, probably for parts to the original figure.  I used this hole as housing for a slim cape, cutting a length in a rectangular shape which dropped to the hem of his lower cape.  Again fraying the edges before folding the top of the rectangle into a point, much the same as the first folds for a paper aeroplane.  Some glue was spotted into the torsos hole and with help of a cocktail stick, the point of the cape was then fed into the hole and left to dry.

A spare casted and menacing head, was painted with an acrylic matt grey to match the tone of Trachta’s exposed shoulders.  When dry, this was placed atop the figure.  Things were looking good but I felt it needed a wee touch more in the menacing stakes, so I decided to create a hood.  The hood was created from using a small off cut of the same fabric which was folded into a slightly oversized cone for his head.  Sewing along the edge the hood was then turned inside out.  Working the excess material shape into folds at either side of the hood’s front with superglue to hold in place.

When completed, I had a rather menacing Sith Lord custom with a removable fabric hood.