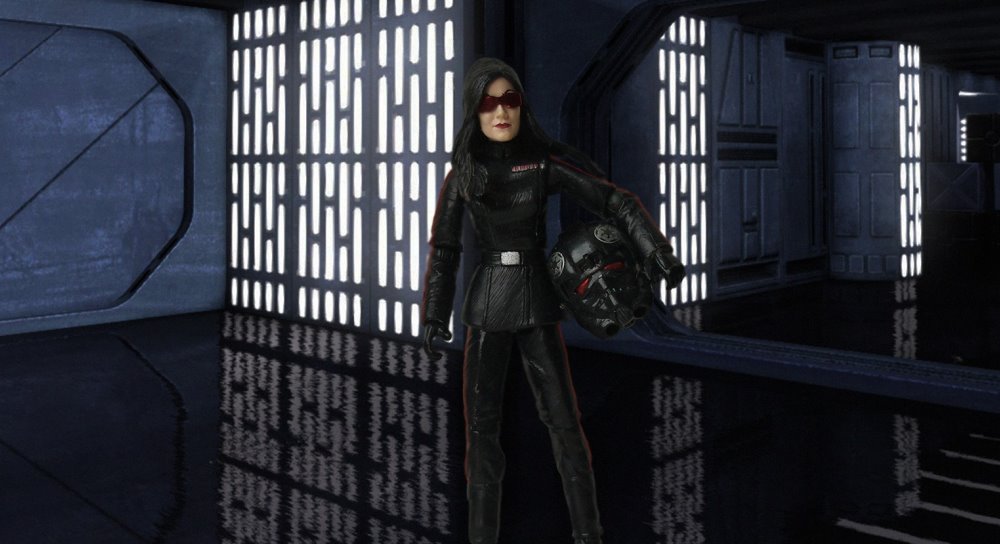 I purchased a fodder lot containing 28 Female Imperial Officers, all complete except for missing their heads.  The previous owner must have had customising plans which only required the heads, and these figures were perfect for plans of my own.

Containing two crimson figures of Ysanne Isard, the rest being a mixture of grey and black uniformed Officers of Deena Shan and Juno Eclipse.

The first custom project from this lot continued my current theme using custom friendly 3¾ inch scale cross-overs of G.I. Joe and Star Wars.  I planned to combine either a grey or black uniformed figure with the head of a G.I. Joe’s Cobra Villainess Baroness (Paris Pursuit).  I opted for the black uniformed figures for reasons explained below.

This custom was inspired by one of my favourite Star Wars graphic novels from Michael A. Stackpole featuring Rogue Squadron and introducing an Imperial hero and later Rebel, Baron Soontir Fel.

I liked the concept of this custom being a cross-over in both parts and twist of character from Baron to Baroness. I planned to replicate one of the Baron’s most identifiable features, his flight suit blood lines, hence opting for the black uniform believing this would provide a more striking contrast.

Aiming for consistently straight blood lines, I used some Tamiya modelling masking tape which was placed along the outer arms and legs.  Leaving a gap of a few millimetres further tape was then placed parallel to the first strip.

Red matt acrylic paint was applied between each of the gaps, when dried the tape was removed leaving nice crisp lines.

A loose Tie-Fighter pilot helmet, which being solid, would be used purely as an accessory for the figure to hold.  I had considered applying grey ace lines to the helmet but instead elected to colour the lenses using a base of coat of metallic silver acrylic followed by two layers of clear red acrylic.  The same colour treatment was applied to the Baroness glasses neatly blending the cross-over parts towards a completed custom figure.