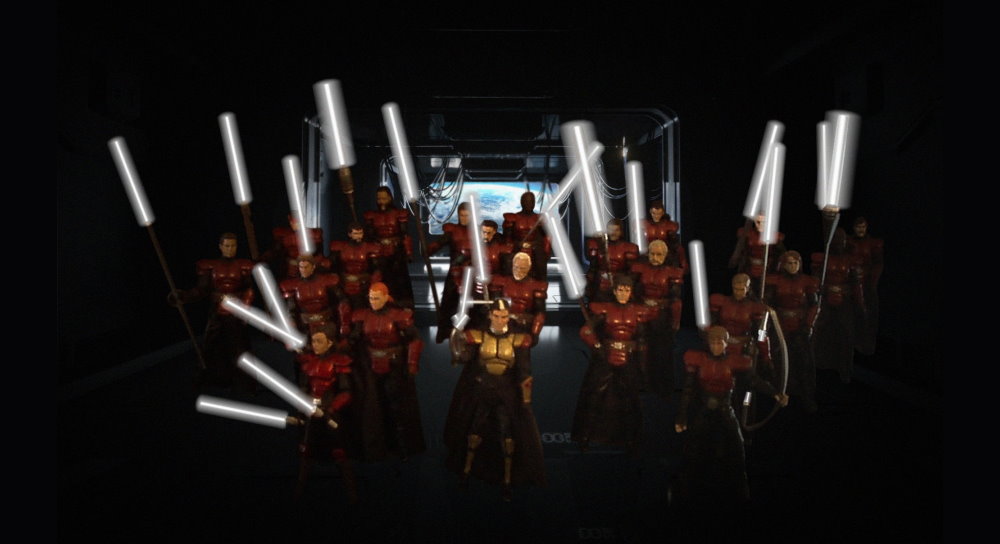 “This is the weapon of a Jedi Knight. Not as clumsy or random as a blaster. An elegant weapon… for a more civilized age.” – Obi-Wan Kenobi, Star Wars: A New Hope

Borne of feudal chivalry and blended with a fantastically futuristic concept, the Lightsabre is arguably the most iconic and identifiable Sci-Fi weapon in film history. 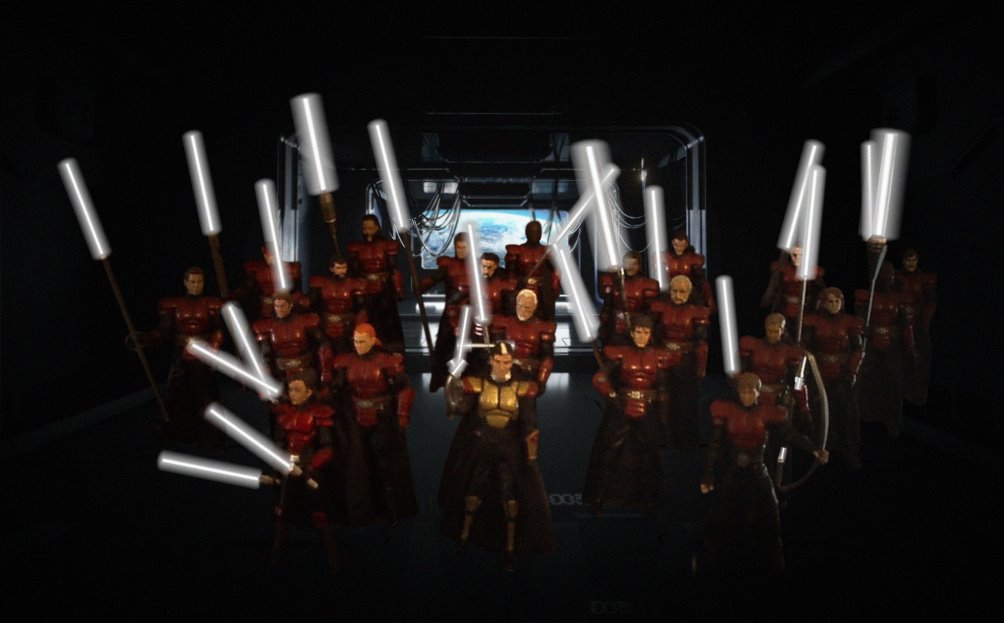 Akin to finger pistol ‘pew-pewing’, much guilty pleasure has derived from makeshift Lightsabres accompanied by mouthed swishing sounds and while this analogue form remains fun, technology has now attained production values affording a plethora of choice beyond the old school static or telescopic lit tubes.  We can now enjoy the tactile experience of advanced models replicating movie quality in both visual and sound effects.

And through prequels, sequels, animation, graphic comics or written novels, we have not only witnessed the evolution of Lightsabre design but also alternative forms of kyber crystal powered weaponry such as Lumiya’s force whip and while not technically drawn from the same stable, Ezra’s nifty energy slingshot.

Which leads nicely onto my customised force weapons project which coincided with the development of a custom Emperor Roan Fel Order, ranking around 60 Knights which I hope to share in a later article, hence the clear Lightsabres representing their ‘Grey Jedi’ type status. Red Lightsabered versions have also been created for their Sith Imperial counterparts, an example of which can be seen in my previous Cyber Maul custom article.

The What Part I

First thing was visiting a favourite model shop and purchasing various modelling materials such as lengths of brass rods, various diameter aluminium tubing and a variety of acrylic/Perspex rods in a number of colours and gauges.

I began with some standard form Grey Jedi Lightsabres before moving onto a version of Kylo Ren’s cross Lightsabre. Much debate followed our introduction to Kylo’s unique weapon, with some questioning the restrictive demands of fighting style and potential weak spots where the cross and vertical hilts meet.  This got me thinking about a concept which again produced a main blade with two shorter blades (or vents). I felt that a twisted crossover would offer an ergonomic form which could be employed through a variety of fighting styles. The cross blades now afforded additional protection as while opposition blades could work down the wielders main blade, this would be blocked from travelling down to the hilt by being trapped by the smaller cross overs. Additionally the crossovers could present new advantages such as locking the opponent’s blade through twisting motions.

As mentioned, around the same time, I completed a Luke Skywalker/Fel Knight hybrid custom whose bandaged hands inspired the vision of an archer. Witnessing Ezra’s energy catapult in Rebels, and although not a kyber powered weapon, I thought it might be interesting to develop a light bow.

See the image below: 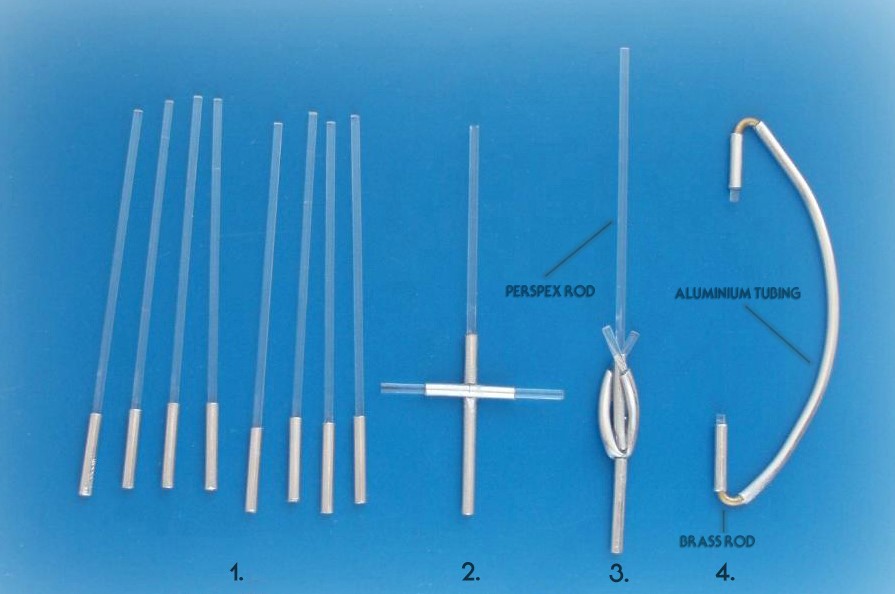 The How Part I

The What Part II

As an avid recycler, when opportunity presents, I like to repurpose and use interesting household objects as customising materials. One such find was a broken old aluminium pen. I dismantled the pen and used some of the parts for my concept Lightsabre project.

The first entry using the pens parts was item #5. Using the pens clip, I fitted it to a length of aluminium tubing resembling a form of Vibroblade. A brass rod was fed into the tube providing, strength and weight. The pens button was then fitted onto the other end of the tube providing some functioning balance. While technically not a Lightsabre, it reminded me of the weaponry employed by trainees during their time at the Imperial Royal Guard Academy.

6 – A homemade dual Lightsabre in the style of Darth Maul weapon of choice.
7 – A Lightstaff similar to that of the Imperial Shadow Guards, however beefed up with a stronger kyber crystal core. Generally wielded by strong knights, what it lacked in manoeuvrability was countered by its capacity to inflict greater damage and from a distance.
8 – The leaner version with a Rebels Inquisitor’s style cross over. The central grips were created using the pen’s central ring.
9 – The final entry in this custom force weapon line up. Aluminium tubing, again with internal brass rods, with clear Perspex rods for blades.

See the image below: 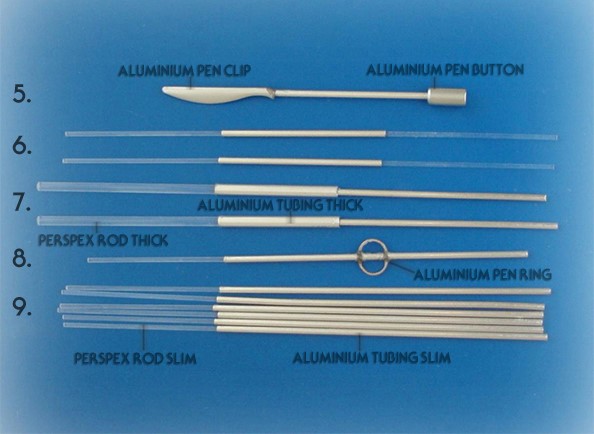 The How Part II

I hope you have enjoyed this project and join me again on Fantha Tracks for further customising adventures.