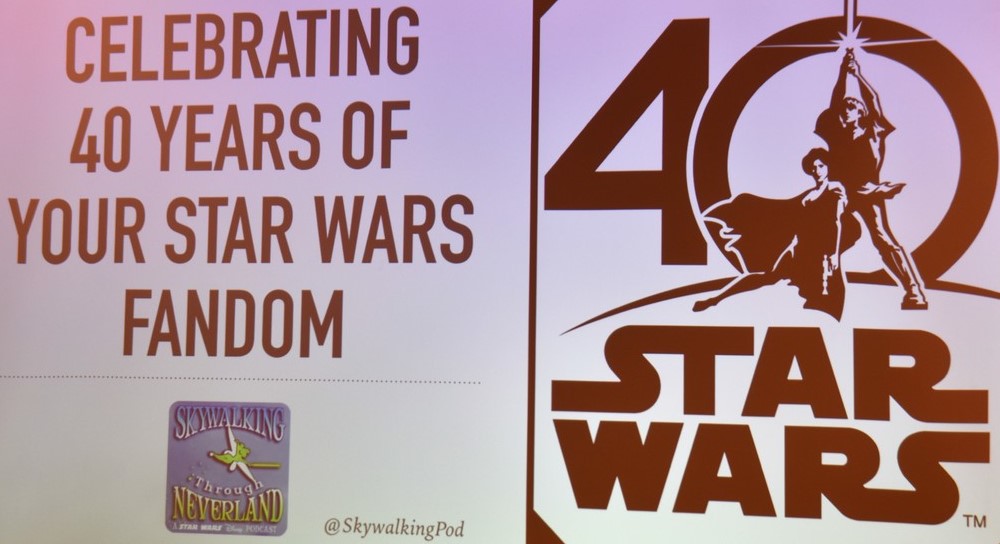 Loscon 44 was held last weekend, November 24-26, 2017 in Los Angeles. This convention has traditionally been focused on science fiction and fantasy literature. But this year it was headed by Craig Miller, whose resume includes Lucasfilm Head of Fan Relations back in the ‘70s and ‘80s. This means he lead the Star Wars Fan Club and wrote the now-classic newsletter – Bantha Tracks.

This was a must-attend event for anyone who hungers for rare panels where you can hear stories about the making of Star Wars from those directly involved in the process. 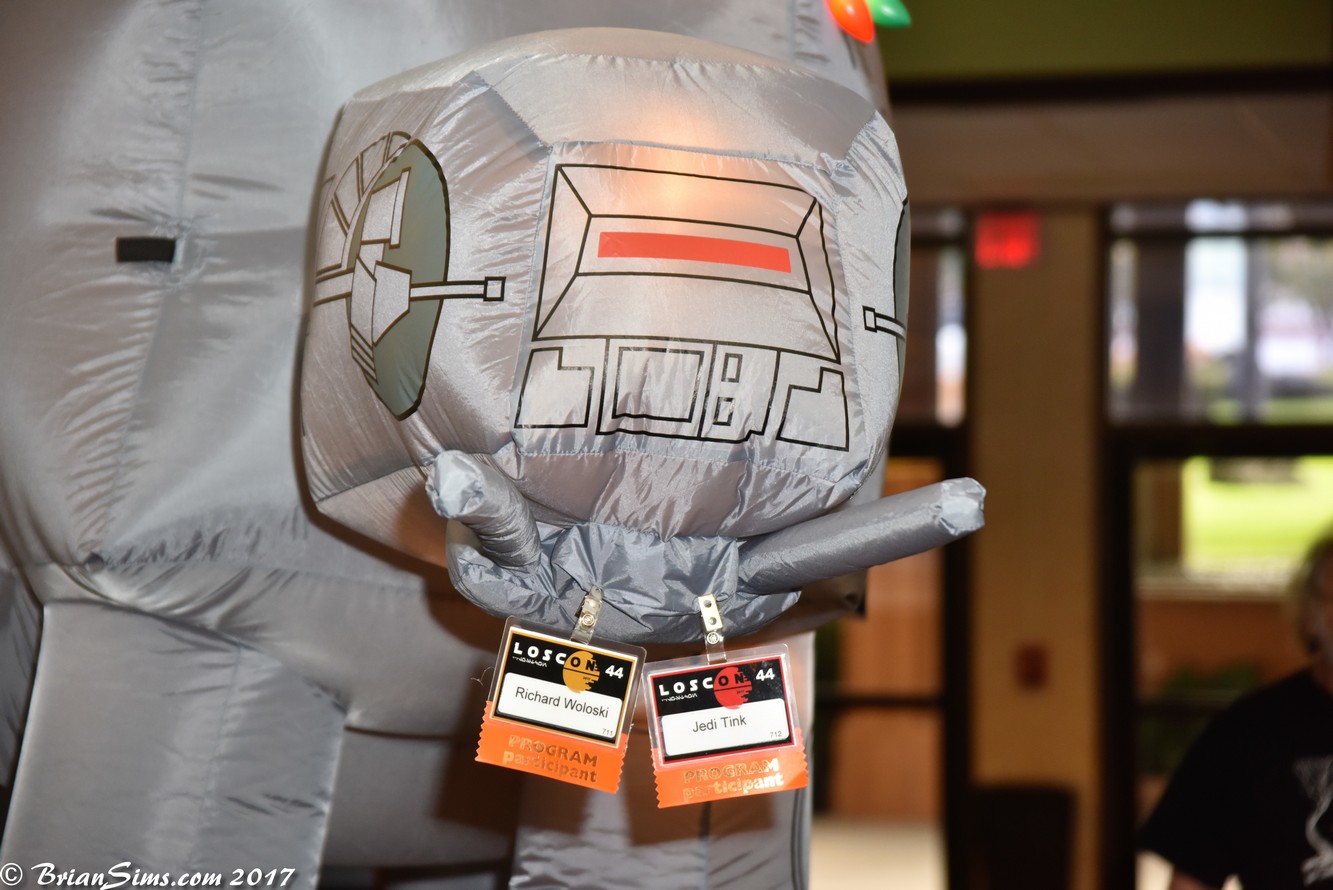 Two panels highlighted Friday at Loscon. First up was a discussion and Q&A with artist, Howard Chaykin. Many know Howard as the illustrator of many of the original Marvel Star Wars comic covers in 1977.

I knew going into this panel that Howard is not a big fan of his work on Star Wars, or the fans who come to see him, but his constant suggestions that we “get a life” became grating. Howard does have very strong opinions on pop culture and even the state of the world, so if anyone is ever planning on seeing him at a future convention, do not bring children. He is not light on his selected use of cursing. With that, I must say Howard was gracious enough to record a sound byte for our Classic Marvel Star Wars Comics podcast.

Here is the full panel, but be warned, it is explicit.

The panel that took everyone by surprise was ‘Behind The Scenes at ILM: Star Wars 40th Anniversary in 3D’. This was hosted by ILM veterans Chris Casady and Doug Barnett who both worked in the Animation Department on miniature and optical effects units. To say this panel was incredible is an understatement! While working in the effects unit back in 1976-1977, Chris took 3D pictures of X-Wings, TIE Fighters, the Millennium Falcon and just about every model in the small model shop in Van Nuys, CA. 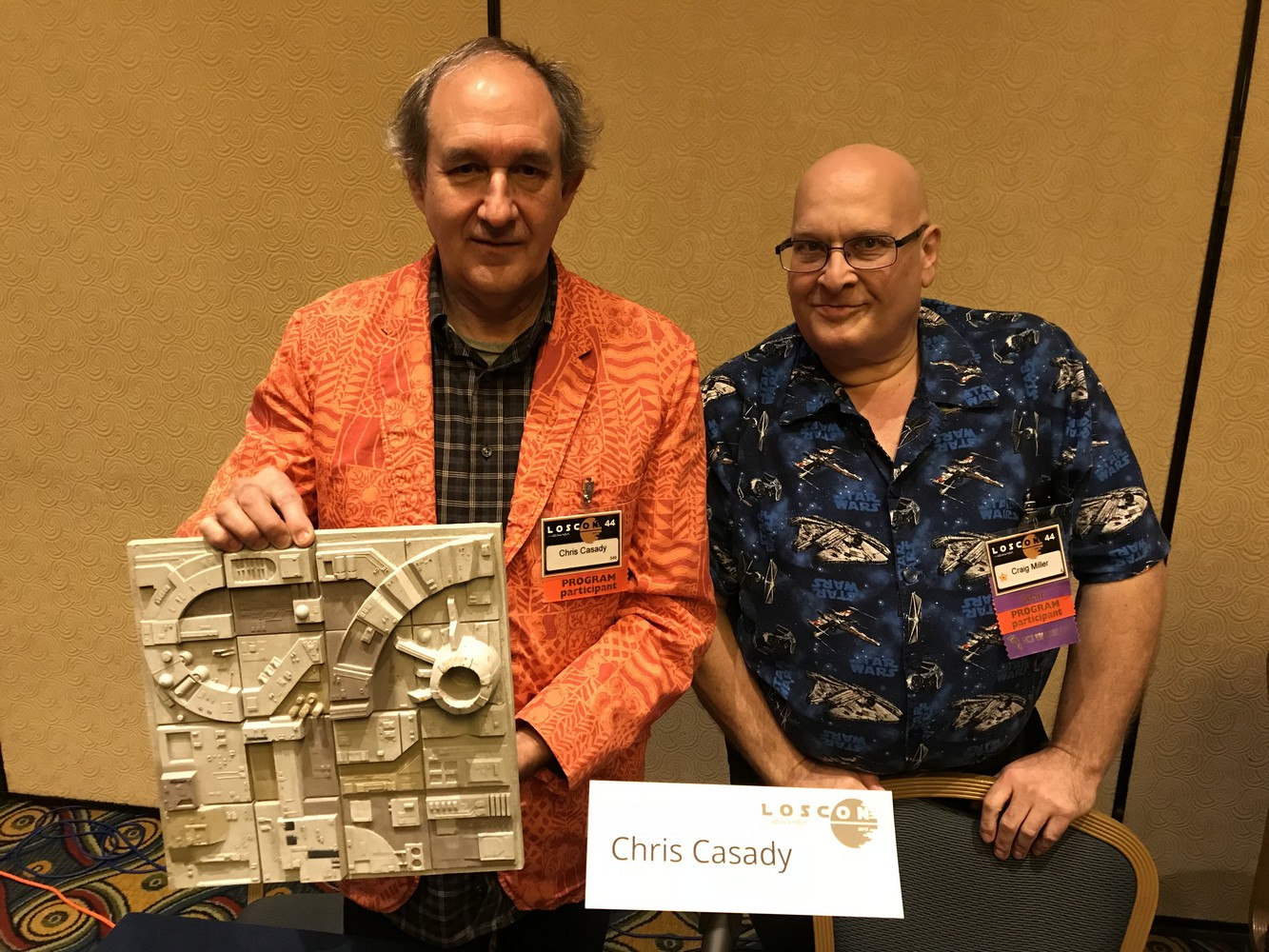 For the first time at a convention, over 200 of these never-seen-before pics were shown to a captivated audience. There were audible gasps at each slide featuring effects units shooting battles, explosions and late-night goofing as the small crew put on various costume pieces. The panel went roughly 1.5 hrs, but if it had gone 3 times that length no one would have cared. The panelists asked that no video or pictures be taken at the panel, so unfortunately we do not have that to share. However, Chris is planning on presenting this panel at future cons and museums, so if you have to travel long distances, DO IT! We loved hearing rare behind-the-scenes stories from people who were there. For those who love to devour information from this classic era but are discouraged when we hear conflicting stories, we were now hearing what really happened first-hand. Take a look and a listen here:

Sunday was our big day as Skywalking Through Neverland presented two panels. We updated and added more events into the ‘Celebrating 40 Years of Star Wars Fandom’. This panel was initially presented at Star Wars Celebration Orlando back in April as just part of our podcast stage show, but now we had over an hour to go back through history and highlight major events that pushed and elevated fandom in the last 4 decades. 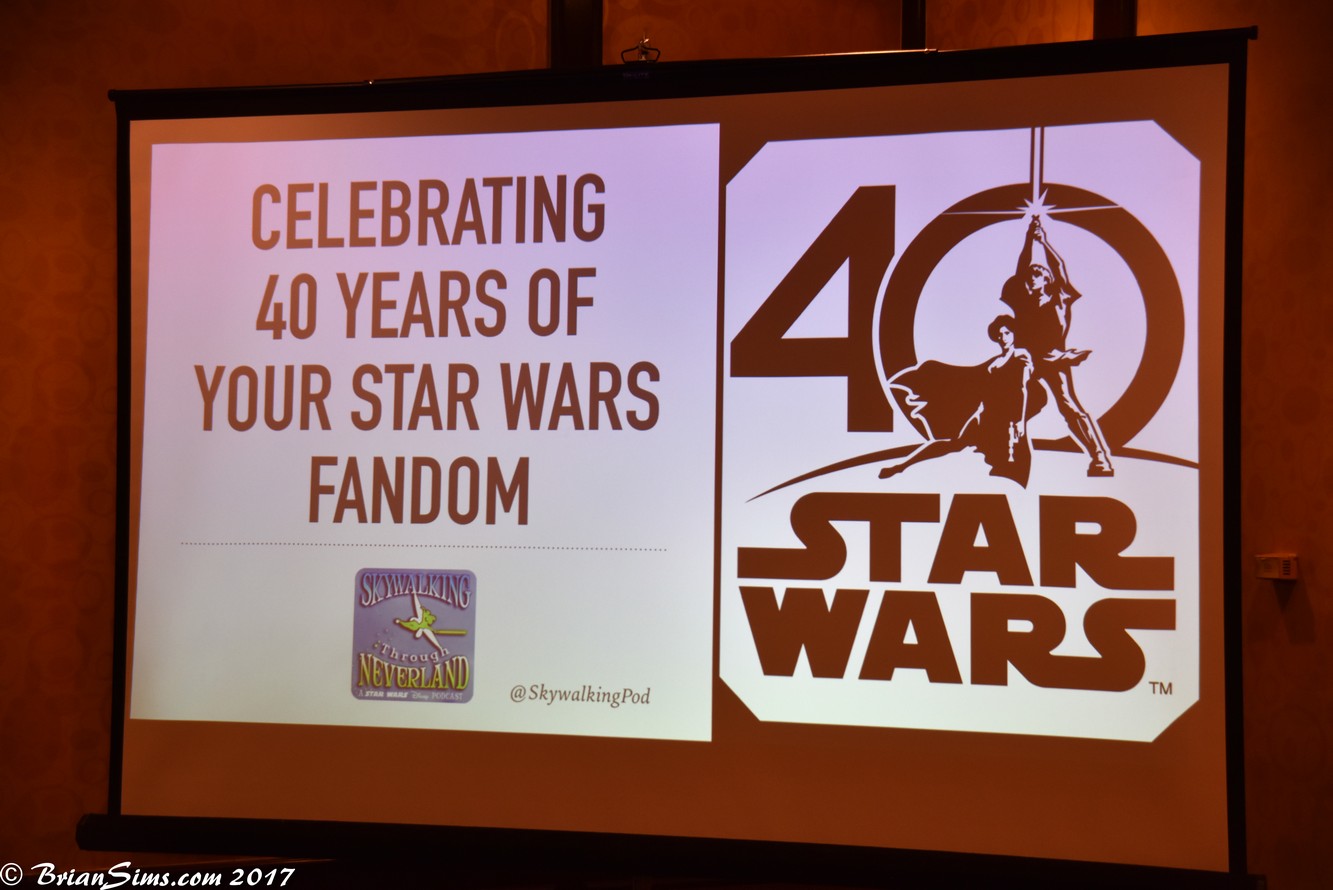 Audience members were also invited to share their personal stories from their experiences. A surprising moment came when we showed a slide of fans waiting outside a New York theatre in 1983 for Return of the Jedi. A woman in the audience shouted, “That’s Me!” She was actually in THAT slide! She and her high school group of friends took the day off from school to attend an early morning screening. Chris Alexander, author of ‘Star Wars Origami’, was also there at that very theatre that day, but since he got there super early, he was first in line and not seen in the photo.

The convention weekend wrapped up with a bang as Skywalking Through Neverland presented our second panel, ‘Force Fun Challenge Games’. The attendees were broken up into 2 different sides. One side was named by their own democracy ‘Assajj Ventress’ and the other named themselves ‘Sy Snootles’. Each side picked members to come up and represent their team in our Mind Tricks and Blast Shields games. Each side won several prizes donated by Donald Wicks and exclusive art prints by Randy Martinez. It was a great unwinding panel after an already great weekend.

On behalf of Skywalking Through Neverland, we’d like to thank everyone that made this weekend a HUGE success. From our Skywalkers who came out to help with our panels: Brian Sims, Bryn McKinnon, David Skale, Denise Power, Willow Freeman and Chris Alexander.

And from Loscon, a big thanks to Craig Miller and Justine Reynolds. 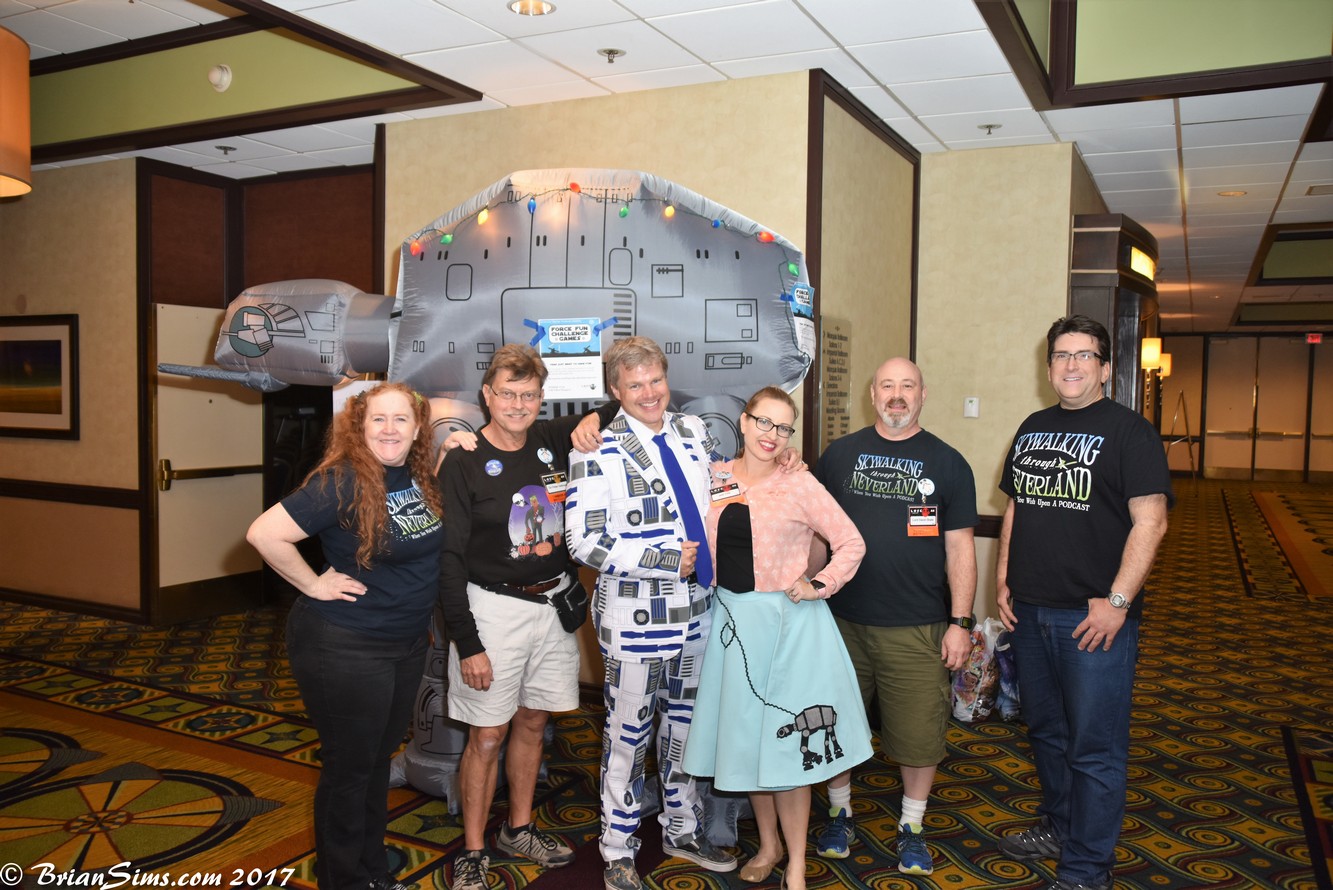 Loscon is held every year during the last weekend in November. If next year is anything like this year, you will not want to miss it! For more info visit loscon.org and go to our site skywalkingthroughneverland.com for exclusive audio content.

Please consider subscribing to our YouTube Channel so as not to miss Movie, Television and Theme Park Press Conferences and events.

Skywalking Through Neverland #274: Rise of the West Coast Resistance!

Skywalking Through Neverland #269: Rise of the Resistance

Skywalking Through Neverland #265: The Mandalorian – I Have Spoken