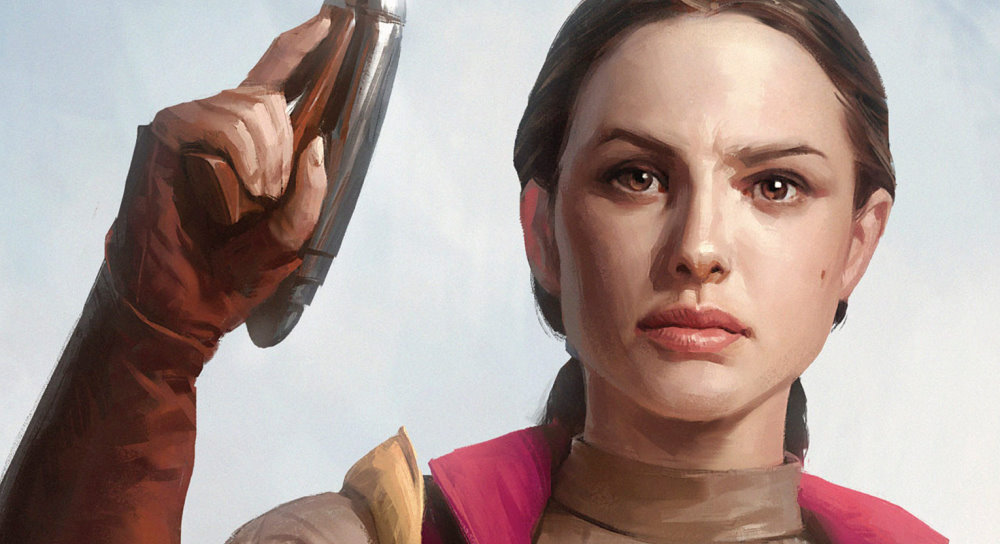 StarWars.com bring us another excerpt from Thrawn: Alliances, which arrives on 24th July and sees Padmé in action on Batuu.

Duja’s ship—Padmé had never known its real name, but the current ID beacon listed it as the Possibility—was small and cramped and, to the casual observer, completely harmless.

But the casual observer would be wrong. The ship boasted extra shielding, twin laser cannons in the front and one in the rear, and a pair of top-grade proton torpedoes. More a pocket fighter than a simple transport, it had evaded Batuu’s pitiful police force with ease.

It should, she thought dully from inside the cockpit escape pod, make for a spectacular crash. 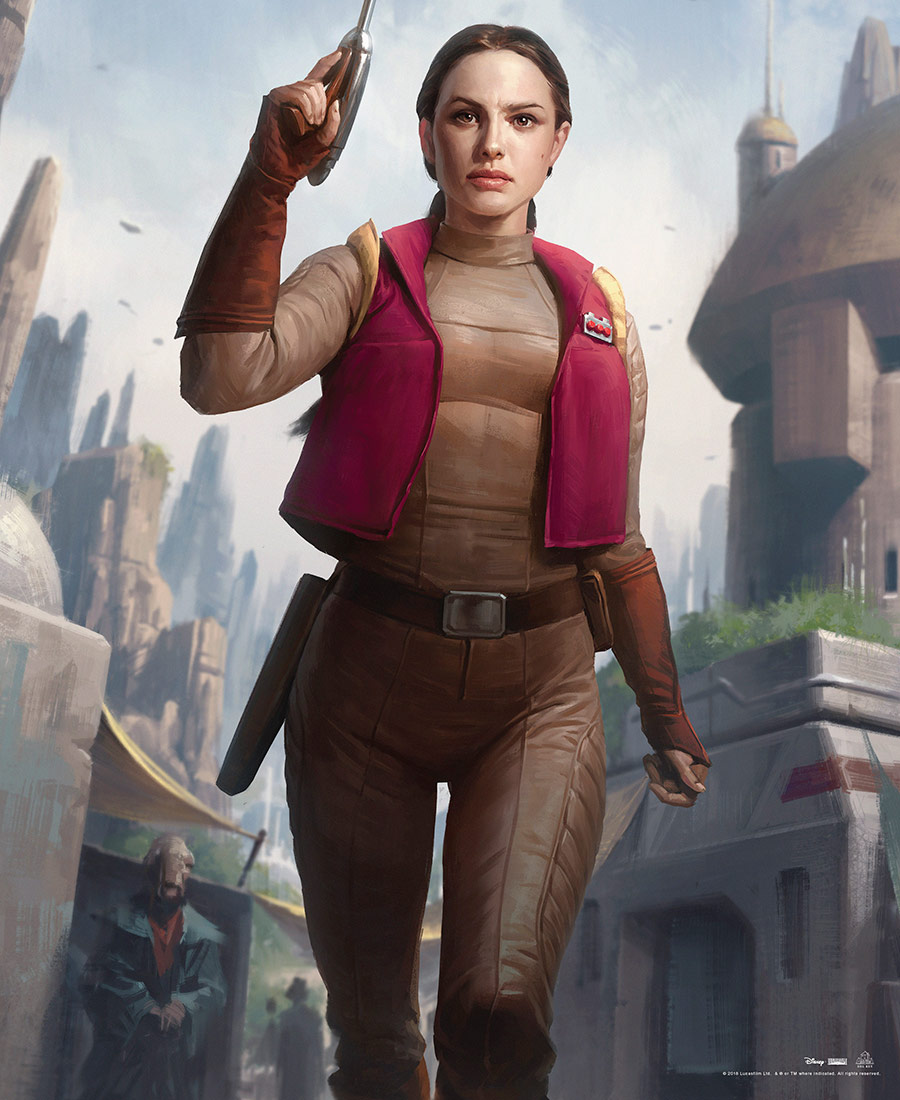 She still didn’t know how that vulture droid had gotten her. She’d arrowed straight into Mokivj as soon as she hit the system, then crossed the wide expanses of plain, scrubland, and lake at the lowest altitude she dared. Combined with the Possibility’s compact size, that should have let her slip past anything patrolling the area around Du­ja’s coordinates. Clearly, it hadn’t worked. The vulture had nailed her, and she’d never seen it coming. Apparently, the Batuu police pursuit had dam­aged her ship more than she’d realized. She’d barely had time to kick it high enough to give the escape pod time to deploy before the whole thing began to come apart.

And now, as she burned at a controlled fall toward the hills below, she watched the multiple pieces of the Possibility arcing their fiery way toward the distant landscape.

Like Duja herself, the ship had faced its final challenge and lost. Now it was up to Padmé to avenge them both.

Though that was starting to look increasingly unlikely. The frag­ments of the Possibility were still blazing and smoking their way through the air, and already she could see a handful of vulture droids starting to gather over the horizon ahead. So far they didn’t seem to have spotted her pod amid the rest of the debris, but the minute her repulsorlifts came on they would probably spot the unnatural shift in trajectory.

Even if they didn’t, the terrain below hardly offered much hope for escape. The hillside was covered in jagged rocks, grass, and wide bushes, with no decent cover for several kilometers around her. There was a glint of sunlight from the river meandering its way downslope; she could see the bushes rippling in a breeze coming over the hill—

She caught her breath. The river.

It would be risky, but right now it was the only shot she had. Tak­ing a last look at the distant vulture droids, she settled her hands on the controls and got to work. 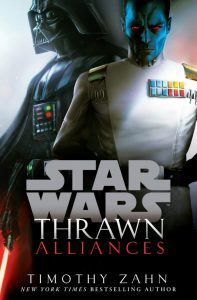 The pod had the standard range of steering capabilities that would offer the passenger a choice of landing sites. But like the repulsorlifts, using the thrusters ran the risk of drawing the vultures’ attention. Fortunately, the river was nearly below her, and it took only a small and brief nudge on the controls to bring her onto the proper vector. She watched the river rushing toward her, trying to judge the exact trade-off point where the risk of droid detection and the chances of breaking her back with the impact were both at their lowest. Fifty meters . . . forty . . . thirty . . . ten . . . Bracing herself, she hit the repulsorlift control.

The deceleration she’d programmed in was more intense than she’d expected, slamming her hard into her seat with an abrupt mul­tiple g-force. Even so, the pod hit the river with an impressive splash, and she watched the water level run up the viewport as the pod sub­merged. She shut down the repulsorlifts and huffed out a relieved sigh.

She wasn’t prepared for the repulsorlifts to suddenly reactivate themselves.

She grabbed the controls again, forcing a manual shutdown. But it wasn’t enough. Even without them the pod had enough buoyancy to start a slow drift back toward the surface. Probably a deliberate safety design, and under most circumstances she would have welcomed it.

Here, though, a bobbing escape pod would pretty well guarantee her capture.

She ran her eyes over the panel, looking for inspiration, trying to find some trick of airfoil or ballast that would let her circumvent the safeties and take her back down again. But the pod’s designers clearly hadn’t anticipated this particular situation.

Which left only one chance. Clenching her teeth, watching the level of the water on the viewport, she keyed the hatch.

For a moment nothing happened. The water continued to recede down the viewport as the pod made its way upward. Then, with a creak of protest, the servos managed to shove the hatch open against the outside pressure.

And with a hissing rush, the river began to pour into the pod.

Padmé gasped as the icy stream blasted across her side and legs, far colder than she’d expected. The water quickly collected around her feet, rising up her shins, numbing the skin beneath her loose trousers. The pod’s slow climb wavered, then stopped; and as the water level approached Padmé’s knees the pod began to slowly sink again.

She keyed the hatch, wondering fleetingly what would happen if the water had penetrated the electronics or incapacitated the motors. But the hatch obeyed the command, resealing itself and cutting off the inrush. Peering upward through the viewport, she watched the play of light on the surface of the water as the pod continued to sink, then finally settled at a level of neutral buoyancy.

She checked her instruments. The readings were a little ambigu­ous, but it looked like the top of the pod was about four meters down. With luck, that would be deep enough to obscure her presence and let her float past the Separatists’ search.

In fact, and with even more luck, she might even be able to ride straight to the manufacturing plant itself. Most industrial processes required a plentiful water supply, and her river was heading in the general direction of Duja’s coordinates.

At any rate, until she was safely past the search area there was nothing she could do. Shutting down everything she could, propping up her feet on a section of the control board to get them out of the water, she settled in for a long wait.

She wasn’t here for her comfort. She was here to make sure Duja hadn’t died in vain.

Padmé Amidala: The Heart of the Republic

When does your visit to Galaxy’s Edge take place on the Star Wars timeline?