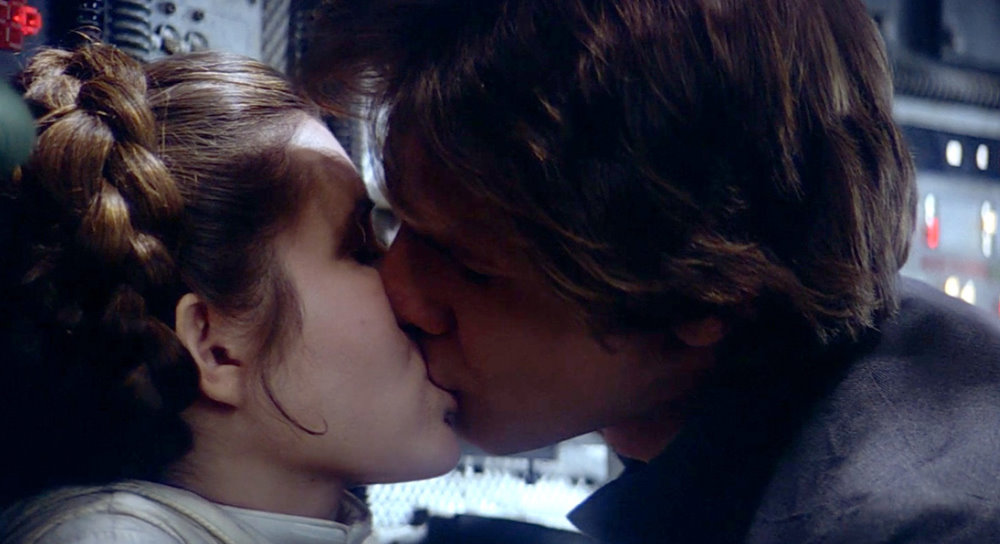 While we’re not sure whether or not the citizens of the galaxy far, far away celebrate St. Valentine’s Day, it isn’t like they don’t have love in their world. It’s fascinating when you think about it, every fictional world that we have created over the years has love. It is fundamental to everything that we do; it is important in every second of our lives. For Star Wars fans out there we will talk about the most romantic Star Wars couples.

In the beginning, Leia felt a real dislike for Han, but as we know, that feeling eventually became something quite different.

He annoyed her, but at the same time, attracted her, which she found weird. Constant squabbles and even a kiss with Luke weren’t able to drown out this incomprehensible feeling, because the princess – while rejecting it at all costs – had fallen in love, which made her even angrier.

It seemed like the story of their love was paradoxical, about people coming from hating each other to passionate and mutual love.

Leia used sarcasm and anger in response to the constant hints by Han that she had feelings for him. And while we don’t know that much about Han’s feelings in this, we can safely assume that these hints were his way of showing his brewing love for her. As a result, they both realized that they had fallen in love with each other. In spite of his character, behavior and deeds, she was ready to do anything for him. He proved his love for Leia, by deciding not to interfere with her and Luke’s relationship, thinking that the princess loved Skywalker. So, Han showed that the happiness of his beloved for him was the most important thing in the world.

Opposites are usually attracted to each other, but in the case of Han and Leia, it seems that strong characters came together, which made their relationship so complicated. Obviously, their life together would be filled with disagreements and struggle because neither Princess Leia or Han Solo was used to making compromises. Even Leia’s declaration of love was not typical, because of Solo’s response. “I love you.” “I know.” These phrases fully explained the essence of their relationship.

The example of Leia and Han shows that love can arise from anything. As a result of fighting and not recognizing their feelings, the princess found her love in a cheeky smuggler, who probably didn’t think about loving this obstinate and stubborn girl.

Their relationship was wild, intriguing, passionate, and entertaining to watch as viewers. If you want to experience these feelings in your own life, then be sure to visit this Russian dating site, where you will be able to meet someone online.

Here’s a couple that you may not have heard of. And we can’t blame you; these characters are a part of the Star Wars Expanded Universe, which, in this case, included Star Wars Galaxies, The New Jedi Order, Dark Nest, Legacy of the Force, Fate of the Jedi and the X-Wing series. Nevertheless, there is something to talk about.

Just as in the relationship between Han and Leia, everything was rough from the start, Corran and Miraz weren’t able to see eye to eye. It was all because of the grudges that they held for each other’s families, but as it turned out, there was nothing more than politics to it, they were able to handle their differences. Later on, they started to enjoy each other’s company. It doesn’t do it justice to call it a slow burn, but they eventually came to love each other.

If you thought that Han and Leia’s love for each other was unlikely, then we should remind you about this odd couple. There seems to be a pattern. No relationship in Star Wars seems to be about love from the very beginning. It is more about mutual development and gaining each other’s trust and understanding.  The same goes for Luke and Mara.

At first, Mara was the Emperor’s hand, and she was sent out with the mission to assassinate Luke Skywalker. She was unsuccessful in her mission and yet they came to discover that they were very much alike and that they felt a sense of love for each other.