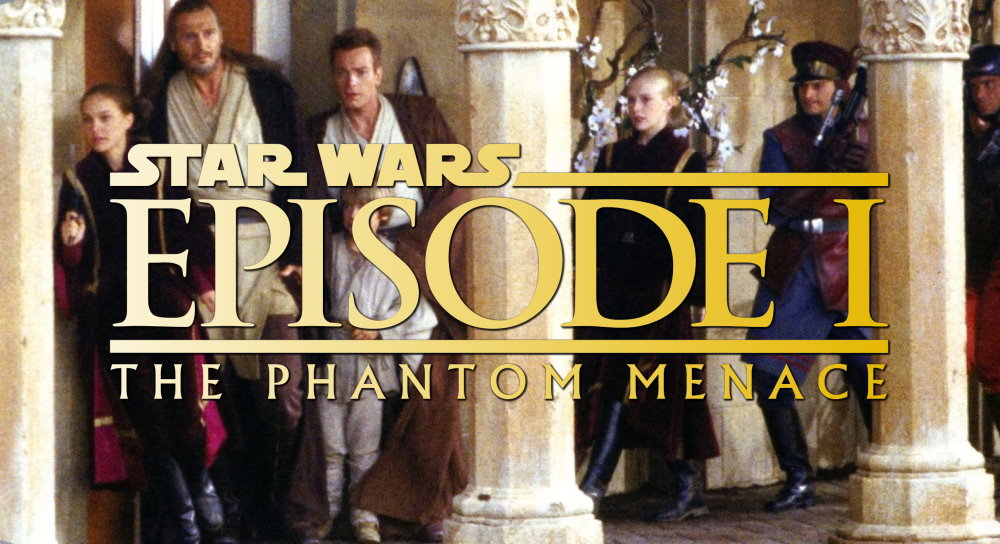 Not many deleted scenes are known to have been taken place on this planet except for some minor dialogue changes with some sentences cut or changed if you compare it to the shooting script, as can be read The Illustrated Screenplay that came out in 1999. The most valuable images that came out of Coruscant, and that cannot be seen quite as good in the movie, are those of the senators because most of those have been put in the background while they were all filmed in the one senate pod that was build.

ARTOO BOOSTER ROCKETS
The only real deleted scene that we have barely seen is that of Artoo and his booster rockets. While waiting at the Royal spaceship to leave Coruscant, curiosity gets the better of our beloved astromech and he falls over the edge of the landing platform. But with his booster rockets he quickly pops back up the landing platform. Obviously this idea was still kept and carried over to Attack of the Clones, but for that movie they did moved and changed the look of the booster rockets.

DARTH SIDIOUS WARNS NUTE AND RUNE
With the Queen, her consorts and the Jedi leaving Coruscant to return to Naboo Darth Sidious contacts Nute Gunray and Rune Haako. In the movie he gets reassured that the planet is under their control and he tells them that Darth Maul will be joining them, but in the original screenplay he tells them a bit more. 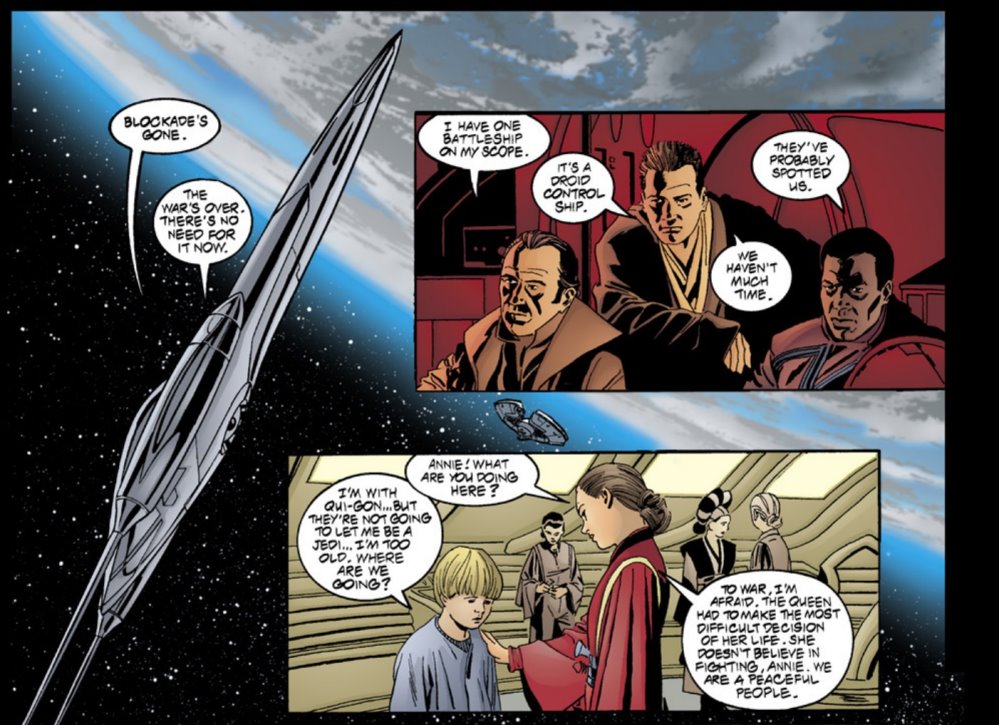 The arrival back on Naboo is also slightly longer, and since it was part of the shooting script, this was most likely filmed. It was also seen in the comic adaptation.

JAR JAR BINKS RETURNS TO OTOH GUNGA
Another short scene is that of Jar Jar Binks entering the lake, swimming to Otoh Gunga and seeing that the city is deserted and shot up. Again, this one appears only in the shooting script with some dialogue of Ahmed Best shouting to ask if there is anybody there. The next scene then picks up as in the movie with him leaving the lake and reporting what he saw.

A lot has changed between the shooting script and the final movie when it comes to the scenes on Naboo with the Neimoidians, Darth Maul and them getting their orders and giving updates to Sidious. In the movie the first scene was in the throne room and the second (with the famous wipe them out line) in the hallways. This was originally the other way around with some additional dialogue getting cut when it was changed. This is that missing dialogue:

OOM-9: I am increasing security at all Naboo detention camps.

Darth Maul: I feel there is more to this, My Master. The two Jedi may be using the Queen for their own purposes.

Darth Sidious: The Jedi cannot become involved. They can only protect the Queen. Even Qui-Gon Jinn will not break that covenant…This will work to our advantage…

The comic did add those lines of Maul back at least.

And the comic also followed the shooting script with Darth Maul voicing his unease and the sense that he was right all along. Considering that this sentence refers back to what he said earlier, which was cut, it makes sense that this line was also removed from the movie. 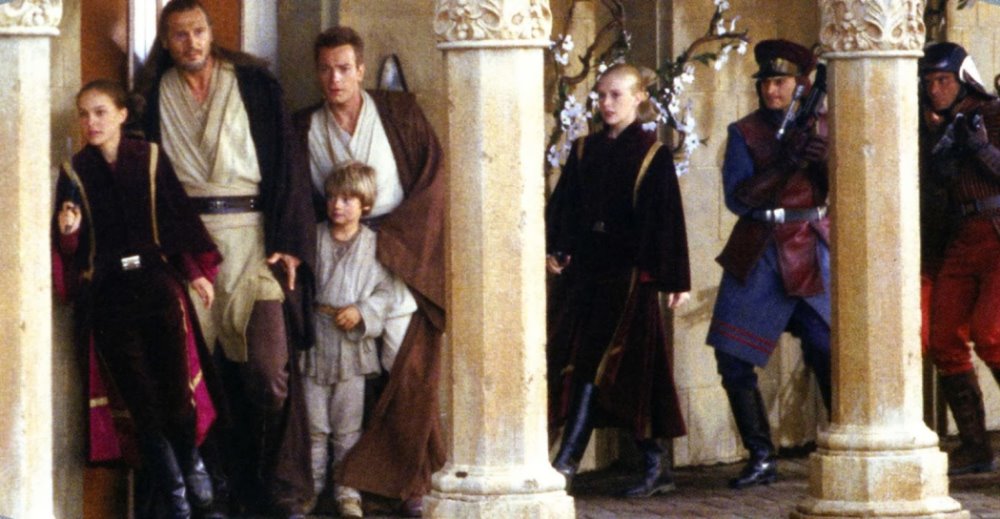 While this shot looks like it was in the movie, it actually was not. If you pay close attention then you can see that those columns they walk behind are nowhere to be seen in the movie as they make their approach towards the palace. 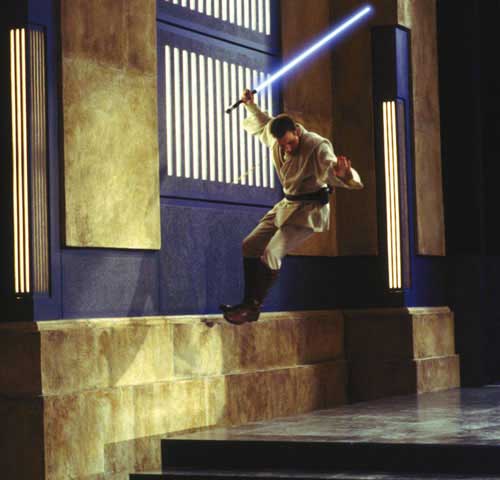 The duel at the end of the film went through many, many changes and it is unsure what exactly has been shot, but not yet shown to us. A good example of that is the image above. Here we see Obi-Wan jumping backwards from the wall in the Theed Hangar, which is the first stage of the fight. This image was shown on the official site back in the day without any explanation given, so it could also be that this was just Ewan McGregor goofing off with ILM painting in the lightsaber blade for no reason at all.

A point in favor to the above being an actual deleted moment is that the TV spot “One Destiny” did feature alternate footage and angles to both the fight in the hangar and also at the Power Generator.

Alternate ideas included Destroyer droids joining the fight, Qui-Gon and not Obi-Wan hanging on for dear life in the pit and objects being hurled towards the combatants with the Force. The latter may have been filmed as it is mentioned in The Illustrated Screenplay, which was based on the shooting script.

The shooting script also included a small bit of dialogue between Artoo and the battle droids as they approached Anakin’s N-1 starfighter.

Join us in a couple of weeks for the first part of the last two articles of this Episode I themed year: This time we will celebrate the other 20th Anniversary, that of LEGO Star Wars and we look at the sets released for The Phantom Menace!