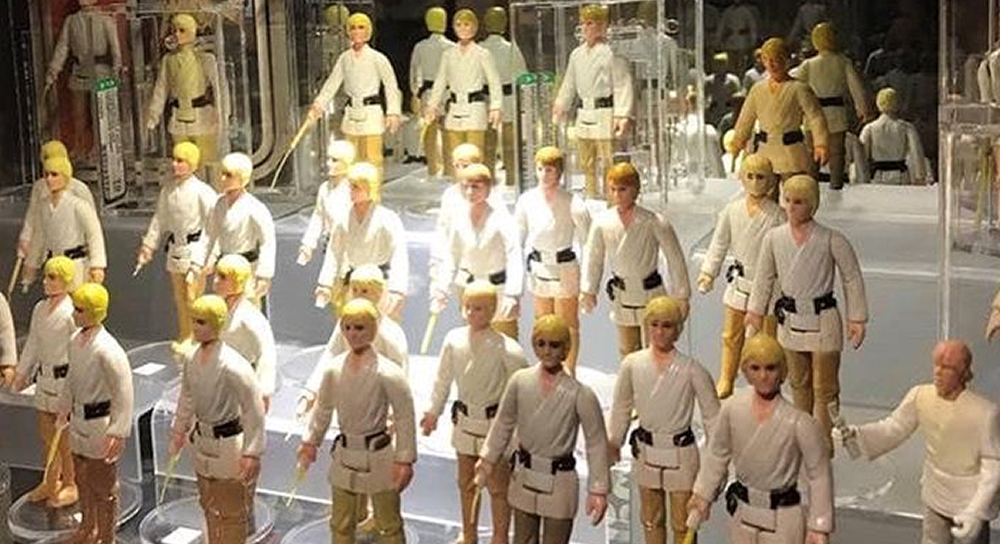 Has there ever been an action figure created that has been more wrong and yet is absolutely right at the same time than the original Kenner Luke Skywalker? 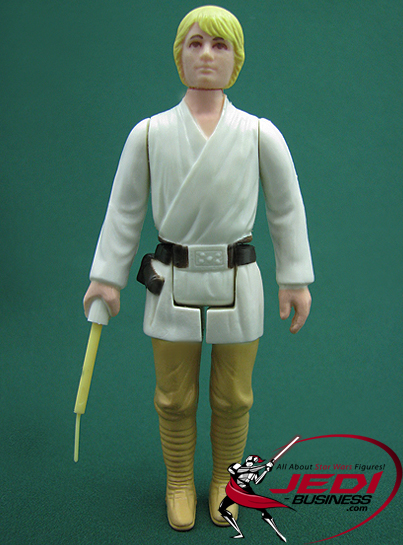 From my reckoning there are 23 modern versions of this specific figure and none, retro line aside, seem to fit with memories from watching Star Wars and then acting out scenes in my bedroom so long ago.  And that is due to the power of Kenner and nostalgia.  The original Luke Skywalker is so iconic that to this day I cannot look at a farmboy Luke with blue lightsaber with any kind of admiration.  This modern Hasbro figure and the JTC variant cover are just plain wrong! 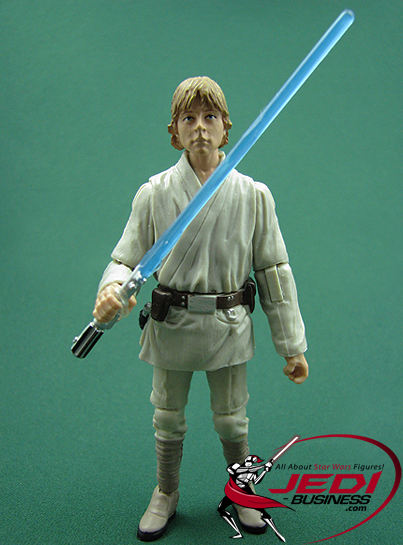 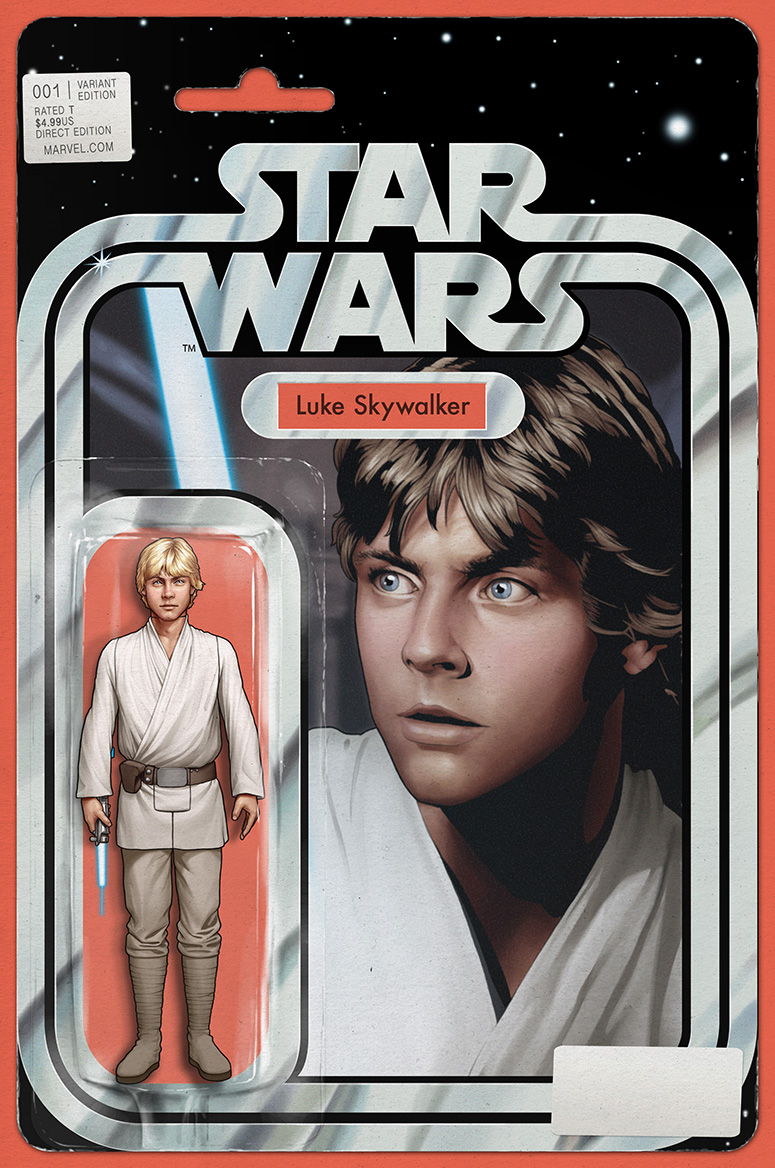 If you weren’t aware the original vintage Luke Skywalker action figure is the basis for all of the other figures’ dimensions that came after.  During a Kenner strategy meeting Bernie Loomis, then president at Kenner, suggested that the figure should be the distance between his thumb and forefinger which was measured at 3 3/4″.  This meant that the other figures could be scaled accordingly. 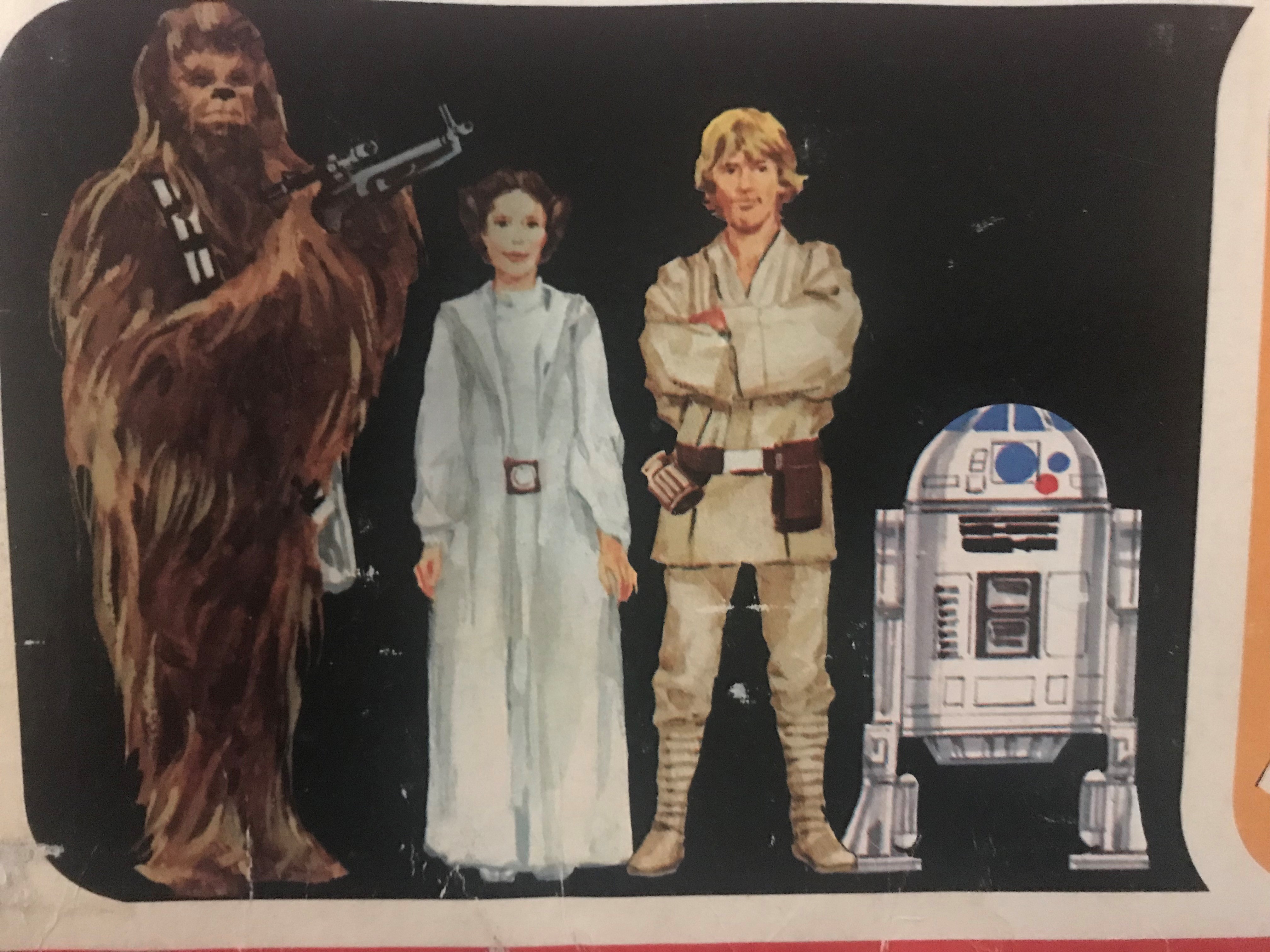 Our farmboy, a term coined by collectors to differentiate between the various Lukes, first appeared on the Early Bird Certificate during Christmas 1977 in the US.

As you can see this depiction looks a lot different to the actual figure we received, although some of the others were much closer. 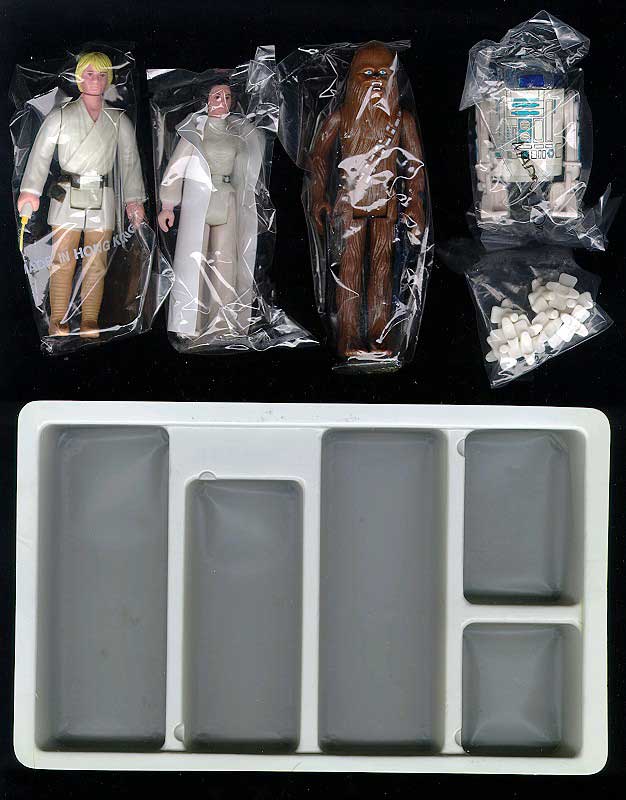 Luke was first shipped to children around March/April 1978 as part of the Early Bird Kit.  There are two versions of this Luke figure to collect.  The first is referred to as the Double Telescoping (DT) version, in that the lightsaber is comprised of two separate parts and was only available in the States, whereas the more common version is made up of a single piece saber with an extended tip.

I see more non-DT sets of these for sale and I guess that’s because most collectors want the original first version.  According to theswca.com neither version is more rare than the other. 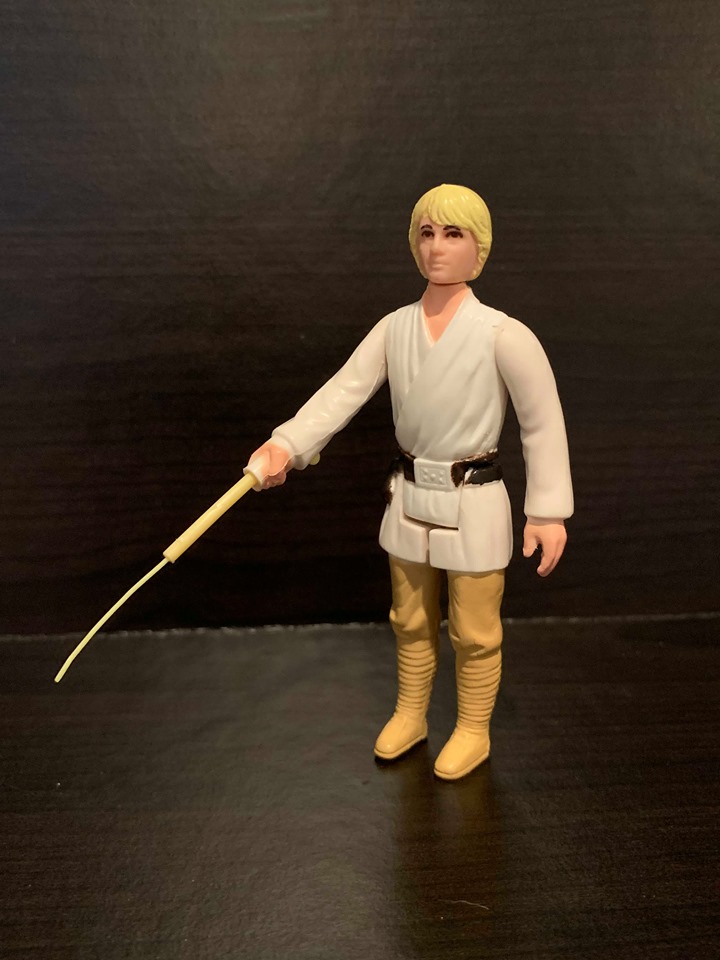 These can be found carded, in several different types of baggies and loose.  They are expensive but your best chance of getting a DT saber without spending several thousands of pounds.

Over the last two years there have been several carded Luke Farmboys with DT sabers for sale.  Most examples have sold for around £15,000 which reflects the rarity of these.

Not surprisingly you can only find DT Luke Farmboys on 12 back cards but they have been found on 12a, 12b and 12c with the latter being the most common.

The prices of baggies can vary greatly however.  They have been found on sw-a, sw-b, sw-c, sw-d and sw-f types of baggies.  The sw refers to Star Wars release and the letter refers to the type of font and style used on the baggie and are collector made up terms.  You can expect to pay £2000+ for one of these and a lot of collectors are looking for them to complete their Early Bird kits such as the sw-a in the photo above and this sw-c.

And finally, we have the loose examples.  You need to be careful when purchasing these because there are a lot of reproduction lightsabers on the market so only buy from respectable sellers.  Typical prices range from £500-£750 depending on condition.  Many of them are missing a tiny 1/8″ bit from the tip of the inner saber.

All examples of DT Lukes that I have seen come with blond hair and I would be very surprised if any appeared with other colours.  The same cannot be said for the more common single telescoping Luke. 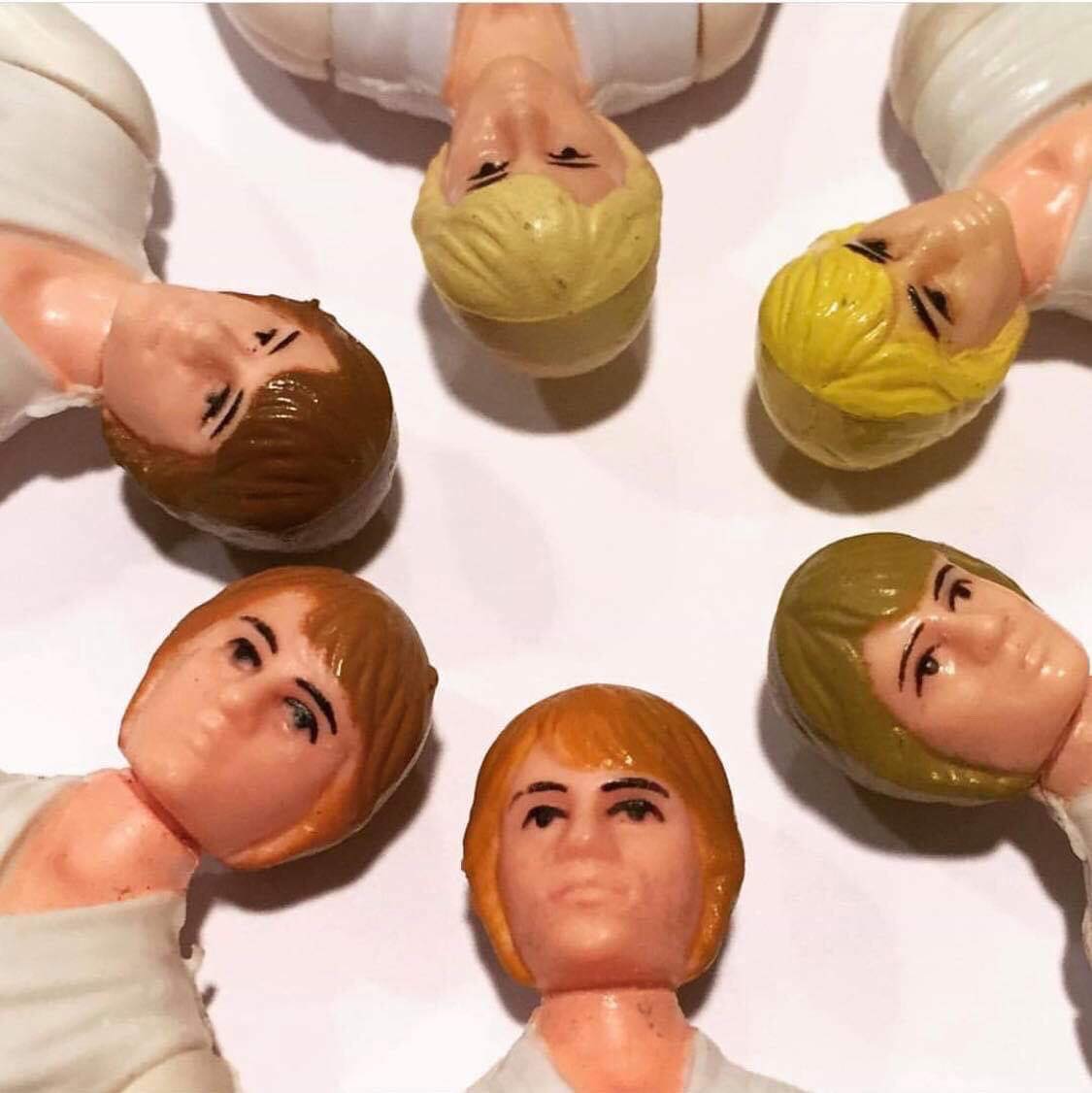 That’s a lot of different hair colours and although it may appear to be a minor thing the prices vary a lot!  Variant prices often depend on how many collectors are looking for those pieces at a specific moment in time.  The orange hair Luke is arguably the most difficult and expensive to acquire, followed by dark brown.  I’ve seen prices hit £300 for a loose complete Orange hair Luke!  A blond Luke can still be found for under £50 in very good condition.

Although there is no agreed convention for the colours they are often referred to as blond, lemon blond, dirty blond, orange, light brown and chocolate brown.  Some collectors report other shades too, these often depend on your own interpretation and others put them down to fading or discolouration.  Why the different colours?  We may never know the real reason but it’s probable that they just used whatever paint was available, after all who really cared at the time?  Other theories are down to paint mixes at different factories or decision based on the prices of coloured paint. 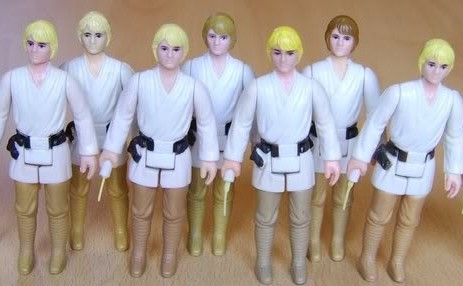 On top of this we have different colours of pants too!  I struggle with differentiating between an actual colour change of pants versus discolouration but I believe that the greenish colour pants appear on Spanish PBP figures and the darker colours were from the figures with Taiwan and some Hong Kong stamps.

The number of different variations can drive a collector mad attempting to track down all the differences and Luke Farmboy must be one of the most difficult and yet rewarding.  And that’s not even touching on baggies or carded examples which must be around 50 different variations ranging in price from a few hundred pounds to several thousands.  Anthony Spinnickie is just one of the many Luke farmboy focus collectors and some of these photos are from his private collection. 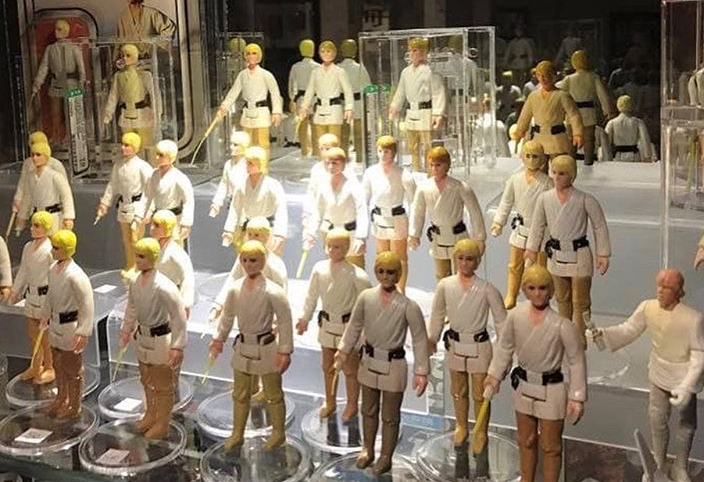 If you are looking for one action figure to display at home, or even to place on your desk at work, you can’t go wrong with the original and the best.  My favourite is the classic blond look but as Anthony shows there’s no harm in hunting down more. 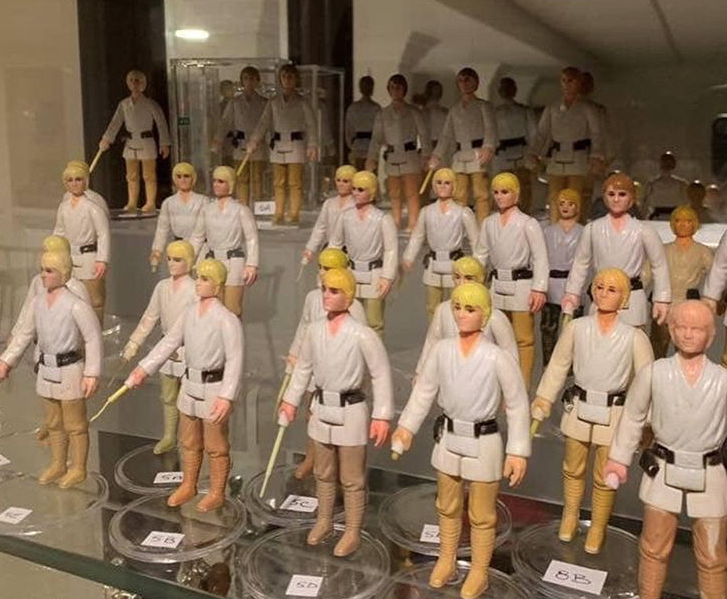 As to the reason for the choice of yellow for the lightsaber, again we may never know the real reason but check out this video from the Retroblasters with some food for thought.