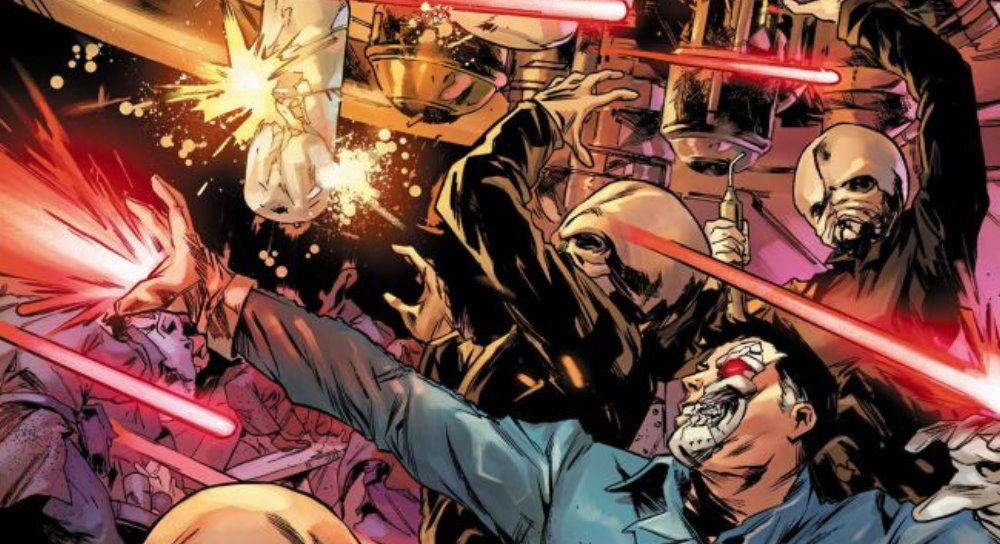 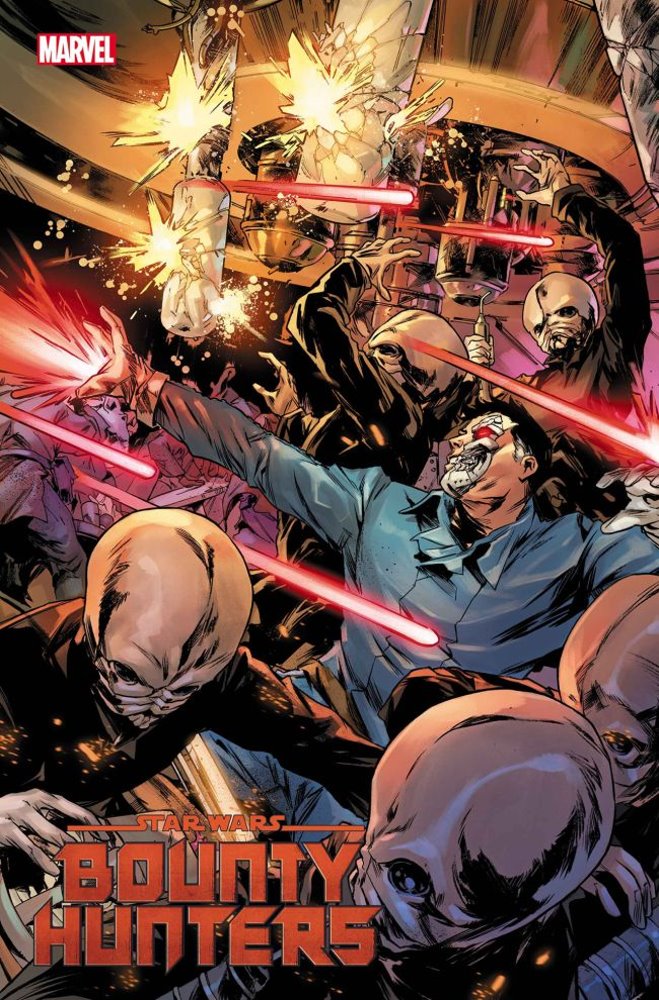 After striking a tenuous bargain to throw 4-LOM and Zuckuss off his trail, Valance is desperate to remove the price on his head before more and more hunters pick up his scent.

To make matters worse, Valance owes favors to powerful individuals. And there’s not a seedy corner of the galaxy where he can hide for very long….

We dive into the mists of time to the wrecked world of Qhulosk as Solo, Valance and their TIE Fighter squadron hit trouble. Damaged, Valance is forced to crash but Solo refuses to leave him, attempting to guide him to ejection and safety even as the fighter goes down, which it does in a smash of flames. Unable to assist, they’re forced to leave Valance to his fate, much to his obvious disgust.

Jump forward to now and we’re in a cabaret pit on the world of Nar Kaaga, on the very edges of southern Hutt Space as a hooded figure arrives for a meeting regarding a lucrative job. The figure is Valance, and unbeknownst to him the target of the lucrative job is Valance himself, and it’s here that we get three very interesting name checks. Apparently ‘cheaper than Fennec Shand’, the assassination attempt on Valance is carried out by a young Tasu Leech, seen many years later in The Force Awakens as all the while the band plays, led by the familiar bith features of Figrin D’aan. Leech puts up a tough fight, but Valance is a seasoned scrapper and dispatches Leech into unconsciousness, taking money from the man he met and who double-crossed him, Sphyacc.

As Valance makes good his escape he’s contacted by Kondra, the husband of his lost love Yura who asks for help finding a ship, last seen at the junction of the Hydian Way and the Corellian Trade Spine, an area rife with piracy. Valance agrees, and jumps to the coordinates, finding the lost ship – the Spirit of Jedha – cast adrift, before being attached by Weequay pirates who are carrying a captured prize, the bounty hunter Dengar.

In yet another busy, action-packed issue – I almost wrote ‘episode’, the story feeling very much like the latest chapter of a TV series – Valance continues to dodge the attention of the hunters on his tail, scraping by financially as he keeps evil eyes off Yura and his head attached to his shoulders. Geographically, this is a far more satisfying issue as we head to Nar Kaaga in southern Hutt Space and jump into the Terminus, on the periphery of the Outer Rim Territories, south of Mustafar and Polis Massa. Comics regularly deliver new worlds – which is fine – but rarely plant them into any kind of geography other than stating their general region, such as ‘in the Outer Rim’ which west of Coruscant bleeds into Wild Space and the Unknown Regions and essentially circles much of the galaxy.

As ever, Ethan Sacks delivers a consistently crisp and curt script, as befits characters of deed and intent. There’s like room for soliloquys here as actions speak far louder than words, and married with the ever-tight artwork of Paolo Villanelli we’re treated to yet another solid chapter in the growing world of Valance the Hunter. Whoever decided to shine a light on what had largely become a long-forgotten character from the earliest days of the EU deserves a hearty pat on the back; if Valance doesn’t make it into live action at some juncture, I’ll eat my tiny, rice-paper hat.

Star Wars: Bounty Hunters Vol. 1: Galaxy's Deadliest
$16.19
Buy on Amazon This is a paid link. Learn More. Clicking the link may take you to the Amazon store servicing your country Price incl. tax, excl. shipping.  Details correct as at: 2021-02-28