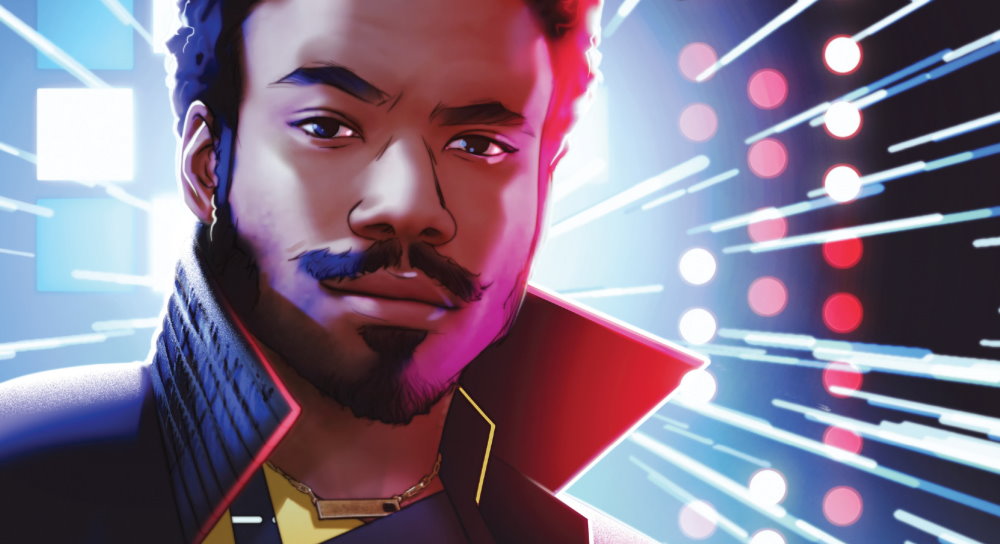 Star Wars Lando – Double or Nothing #1

LANDO Double or Nothing PART I

A long time ago in a galaxy far, far away….

The Galactic Empire grips the various star systems in a stranglehold of repression. But there is still hope — for the criminals who seek to profit under the new regime!

LANDO CALRISSIAN, the “greatest smuggler in the galaxy” and captain of the Millennium Falcon, lives for the big score — especially if it’s at the roll of the dice. And nothing will ever get between Lando and his fortune and glory….

There’s very little negative to say about Solo: A Star Wars Story. Despite not pulling in the huge audience it deserved, the film gave us a look inside the history of Han Solo and an era of Imperial expansion across the galaxy, while also realising some moments long-known; the first meeting of Han and Chewie, Solo falling in love with the Millennium Falcon and the fateful meeting of Solo and Lando Calrissian and THAT sabacc game.

Here, expanding upon the Calrissian we met in Solo, Double or Nothing shows Lando, L3-37 and the Falcon in their pre-Solo adventures as the roguish self-proclaimed ‘best smuggler in the galaxy’ evades Imperial attention as he strives to make sure the galaxy is fully aware of his awesomeness via his own Calrissian Chronicles memoirs and the installation of a wet bar, crystal gaming tables and a self-portrait. Yeah, his ego knows no bounds, but as we find out his good conscience certainly does.

Every good tale has a mission, and this first issue lays it down as the subjugated people of Petrisia, held on the Kullgroon outpost struggle under the heel of the Empire, contact a smuggler who traded with them after the Empire seized control of Petrusia. That smuggler is Lando, and he is offered a fee to smuggle weapons in, an offer he initially refuses until a disgruntled gambling opponent arrives to claim his stolen money and so a deal between Lando and Kristiss is grudgingly agreed.

As we reach the end of the issue the Empire catch up with the Falcon and after evading them in classic Calrissian fashion they arrive at Kullgroon, ready for the next step in the mission. It’s certainly fun to see Lando and L3 sparring again, their relationship a highlight of the film and off this issue and to watch Lando in all of his unabashed, self-centered glory is a treat. He really does believe he’s the center of the universe, so to see this part of his arc as he moves from the Lando we know here to the man who destroys the Death Star is a treat.

The art work by Paolo Villanelli is tight while the story by Rodney Barnes sets up a potentially interesting series, but in this first issue it’s definitely the script and the characters that hold the most interest. A solid start to the series which will hopefully become a valued addition to the sadly limited time we spent in the company of the characters and situations of Solo: A Star Wars Story. Fingers crossed issue 2 heats up the coaxium as we arrive at Kullgroom.