STAR WARS NEWS IN A SINGLE FILE
Search
Home Blogs Event Review: May The Toys Be With You 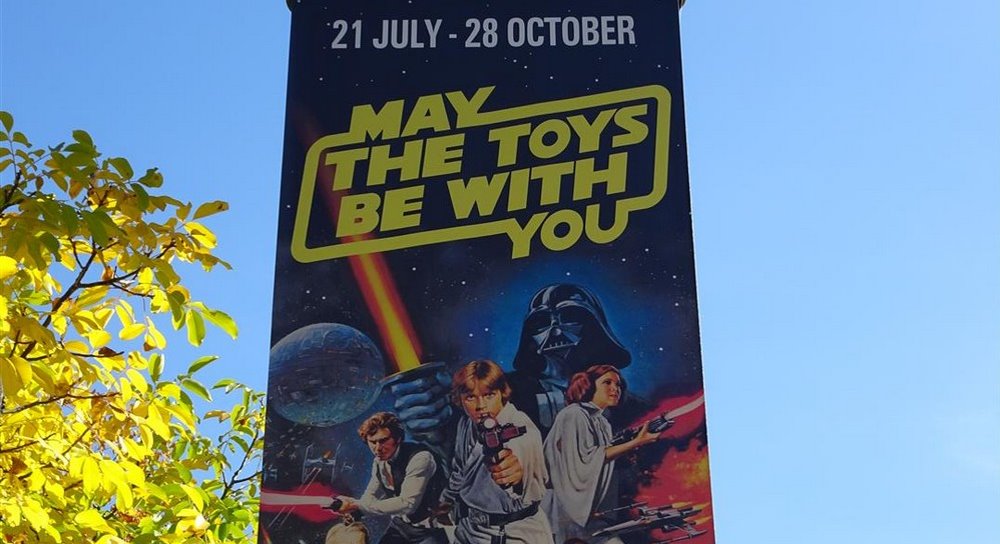 I recently visited the May The Toys Be With You exhibition at Leicester’s New Walk Museum & Art Gallery. This is a touring exhibition, having already appeared at several other museums around the country including Torquay, Southport, Paisley, Basingstoke, Liverpool, Gosport, Canterbury and Barnsley. However, Leicester seems the most fitting location for an exhibition of Star Wars toys given that Palitoy, the company responsible for the iconic vintage Star Wars toys in the UK was based at Coalville just outside Leicester city. You might say it’s the home of Star Wars toys in the UK.

The exhibition displays the collection of Matt Fox from Canterbury, features and extensive collection of vintage Star Wars toys, posters and artwork.

Upon entering the museums grand entrance you will be greeted with the help desk and gift shop which was selling an exhibition souvenir program and lots of other Star Wars related merchandise.

Heading upstairs to the exhibition entrance, which is an equally grand entrance with columns and glass doors featuring a large decal of the May The Toys Be With You logo.

Stepping through the doors, the first item you will see is the rare Palitoy Death Star space station cardboard playset from 1987. This was designed and manufactured by Palitoy in the UK as an alternative to the more expensive plastic Death Star playset that Kenner were releasing in America. Behind this is a large information board giving an overview of the inception and history of Star Wars toys.

Moving to the left you’ll see where it all began with the rare Kenner Early Bird Certificate Package. As the information board explains, Kenner were unable to have product ready for Christmas 1977, so instead of having nothing of the shelves for Christmas they opted to sell Early Bird Certificates that entitled children to redeem four action figures when they’d been manufactured in the New Year. Kenner sold 500,000 of these certificates over that Christmas period.

As you continue around the display cases you see the whole collection of loose figures as well as numerous carded figures, and boxed vehicles and playsets. Several of these I’m seeing in person for the first time, notable most of the famous ‘Last 17’ of which I only own 5 of and the Blue Snaggletooth that was exclusive to the US Cantina Adventure Playset. What I find remarkable is the ‘as new’ condition of the figures compared to the played with, sun faded condition my own childhood figures in my collection.

The information plaques next to each display case offer a wealth of information, including details and trivia on the history of the line (with particular focus on the UK), variants and foreign releases, collecting, the importance of condition and how it affects the value, and how to spot forgeries with a display demonstrating how many reproduction accessories will sink whereas the genuine accessories will float.

In the centre of the room is a life size Han Solo frozen in Carbonite and two Stormtrooper, providing a photo opportunity for those inclined.

Moving past this to the poster collection. Here you’ll find a large range of posters, many exclusive for UK cinema’s and many by UK artists, including the iconic Tom Chantrell poster.

The back of the room also has a colouring area for children to create their own posters.

Walking back around to the beginning of the exhibition you find a final display case featuring assorted rare items and oddities. One that immediately caught my eye was a custom of unproduced prototype, black Tandem X-Wing Fighter from Kenner’s cancelled 1986 Power Of The Force: The Epic Continues line. This was Kenner’s plan to continue the Star Wars line past the events of the movie with original characters and vehicles, but ultimately Lucasfilm rejected the pitch.

Also featured in this case an interesting urban legend that tells a tale of Palitoy’s last resort to clear stock upon the demise of the line. As the tale goes, Palitoy were left with no option but to dump a large quantity of then ‘unsellable’ toys into a local landfill in Leicester. If true many of these would likely be the rare ‘last 17’ of the line.

The exhibition was a joy to walk around, rekindling many memories of Christmases I got a particular toy featured in the display.

Then seeing as it was on the way home, the day wouldn’t have been complete without a pilgrimage to the old Palitoy factory in Coalville, who’s former site has been honoured with the Leicestershire County Council Green Plaque Award.

The May The Toys Be With You exhibition will be on display at Leicester’s New Walk Museum & Art Gallery until October 28 with free admission, then it will move on to the Royal Albert Hall.