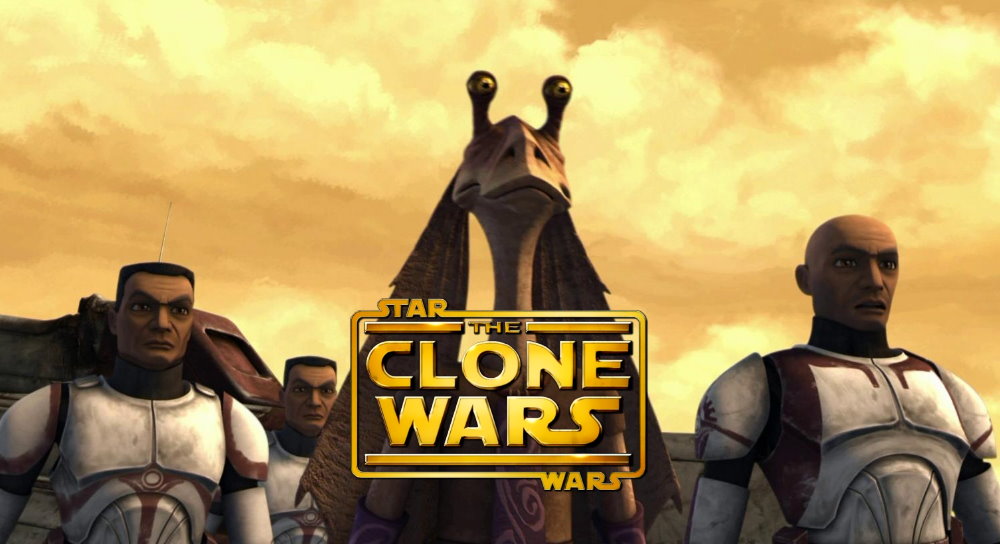 When The Clone Wars first aired back in late 2008, Lightsabre.co.uk guest reviewers looked at the show, giving their initial gut impressions on that groundbreaking first season – but not every review was completed, and so those reviews written at the time were never published. In a brand new article, Adam Lamping looks back at the twelfth episode of season one – The Gungan General.

“Fail with honor rather than succeed by fraud.”

Dooku held for ransom! After escaping capture by Jedi Knights Anakin Skywalker and Obi-Wan Kenobi, the villainous Count Dooku fell into the clutches of pirates led by the brigand Hondo Ohnaka. Eager to get custody of Dooku, the Republic agreed to pay Hondo a hefty sum in exchange for the Sith Lord.

But Anakin and Obi-Wan had not counted on the treacherous cunning of Ohnaka and his band….

Picking-up right from where the previous episode, “Dooku Captured” left-off, “The Gungan General” opens with Obi-Wan and Anakin waking-up in a prison cell and chained to Count Dooku, having been drugged by Hondo. With the impending arrival of the ransom for Sith Lord, Hondo’s crew, led by Turk, seek to double-cross the pirate captain, and take the spice for themselves. Jar Jar accompanies Senator Kharrus to Florrum, and as he is so often prone to do, becomes more of a hindrance than a help, seemingly contributing to the senator’s death when the Republic gunship is shot down by the pirates. As a result, Jar Jar becomes the highest-ranked individual in the group, with Commander Stone and the Clone Troopers all looking to him for leadership.

Amidst a constant stream of bickering between the Jedi and Sith, Dooku engineers an escape for the three of them, though their freedom is short-lived, and they are returned to their cell. You can never keep a good Jedi down though, and it’s not long before Obi-Wan has used the Force to influence a weak-minded Weequay to open the prison door, allowing him, Anakin and Dooku to make a break for it.

Then it is back to the skirmish between the pirates and the Republic party, with the former getting the upper-hand, allowing them to make-off with the spice. Jar Jar makes a smart observation about the indigenous skalders, who sense when it is safe to hide within the acid geysers, and subsequently following the lead of the creatures to climb out just before the geyser erupts! It is not long before the group are seen riding the beasts, catching-up with the pirates and regaining the ransom.

Meanwhile, Anakin, Obi-Wan and Dooku’s efforts to evade Hondo are once again unsuccessful, resulting in the two Jedi being tortured, much to the delight of the pirate captain.

Turk’s desperation to obtain the spice sees him taking three tanks in a show of force, while Jar Jar accepts the responsibility of being the one to go out and negotiate with the pirates. Cue more clumsiness from the Gungan, which, as we’ve seen before, ends-up working out for the best, resulting in the destruction of the tanks and the power lines that service Hondo’s base.

The loss of power to the prison door means that Dooku is able to walk out of his cell and overcome his guard, while Anakin and Obi-Wan are also freed and quickly regain their weapons to turn-the-tables on Hondo. In the process of making his escape on one of the pirate ships, Dooku shows no mercy to Turk, while the Jedi, displaying more noble traits, allow Hondo to live another day.

One interesting point to make about this episode, is that it is one of a few where Jar Jar is voiced by B.J. Hughes, and not Ahmed Best.