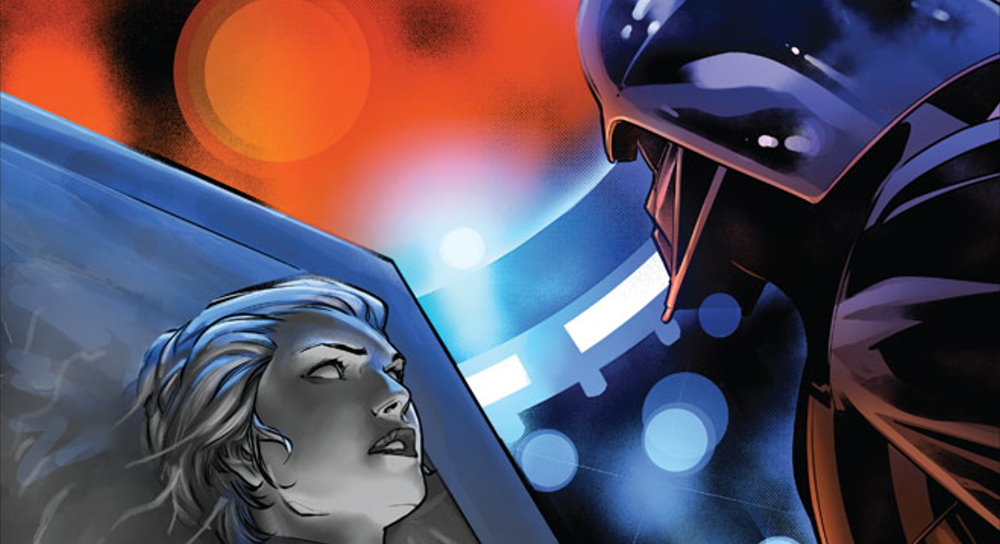 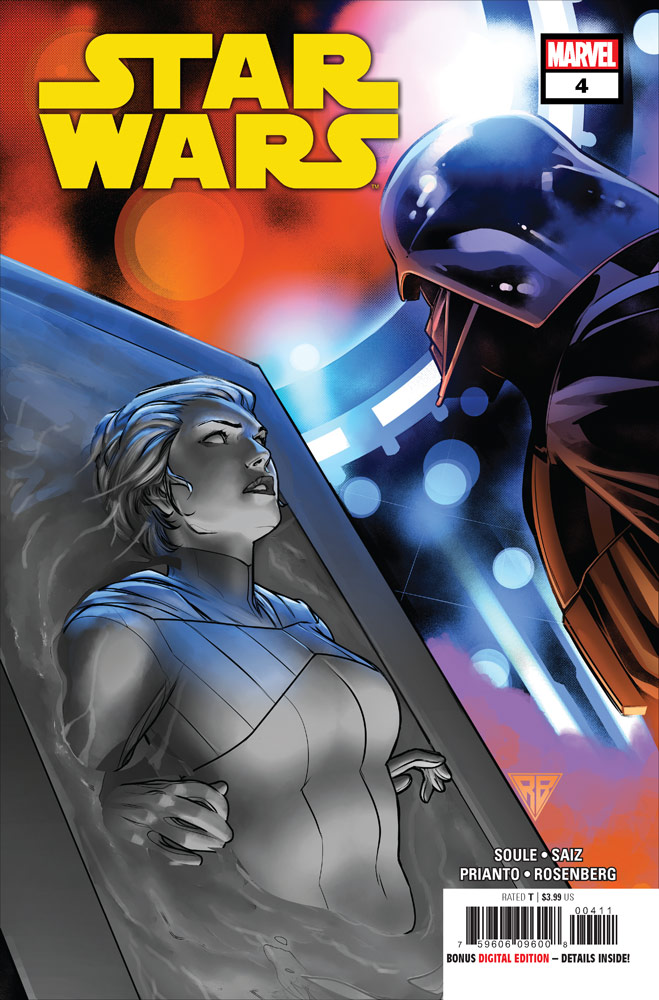 While Luke searches through Cloud City’s waste for his lost lightsaber, Lando and Lobot are hunted by stormtroopers, and Leia has been captured by the Empire and frozen in carbonite….

While the cover is completely misleading – yes, Leia is in carbonite briefly but Darth Vader isn’t even physically in this issue, let alone anywhere near the princess – it certainly is striking, and that’s the aim of the issue, to not only lace in some logical foreshadowing (we now know how Leia knew how to unfreeze Han Solo in Jabba’s Palace) but to show the heart of Lando Calrissian to Luke and Leia, retain his hero status in the eyes of the people of Cloud City and even show Luke’s missing lightsaber, on its long journey to Maz Kanata’s castle.

First off, the carbonite. Carbonite freezing is no laughing matter, and the novelisation of Return of the Jedi made it clear that not only is being frozen in carbonite a long, waking, breathless scream but also a fast route to hibernation sickness and mental ill-being. However, the script is savvy enough to make it clear that Leia and the others frozen had only been in there an hour, so presumably it would be more akin to being knocked out for a minor operation and woken shortly thereafter; confusing, disorientating but not much more than that.

Here we see Lando retrieve the captured Lobot, his skills always useful in a pinch and watch as Luke reconnects with the Force, displaying control and command over the Force he didn’t have a few days earlier during the events of The Empire Strikes Back. There are neat nods to The Mandalorian (could that be Kuill who collects the lightsaber after Luke stops his search to help Leia?) and Return of the Jedi (Luke’s vision shows the Emperor ordering him to ‘Take your weapon’, something that is still a year away) and as Luke wings away from the now contaminated (and oddly saved) Bespin atmosphere on his own path, the gang are broken up, much like a good chunk of the original Marvel run as Chewie and Lando followed leads to find Han and Luke and Leia pushed on as leaders in the Rebellion.

The art from Jesus Saiz is absolutely on point, complimented by lush colouring from Arif Prianto and Rachelle Rosenberg and Charles Soule’s script fizzes along as the characters all adjust to the aftereffects of Empire. I’ve long believed the year between Empire and Jedi to be not only the most fulfilling in the saga – Luke adjusting to Vader’s revelation, Leia to the loss of Solo and her increasing responsibility in the Rebellion, Lando with his own decisions, and the Rebellion with its search for an end game to the Galactic Civil War to say nothing of what was going through the mind of Darth Vader – but also the most breakneck and satisfying. Before ’83 we had no idea what was to come, but over three decades later we do, and that year has so many opportunities for storytelling it’s good to see Soule take full advantage.