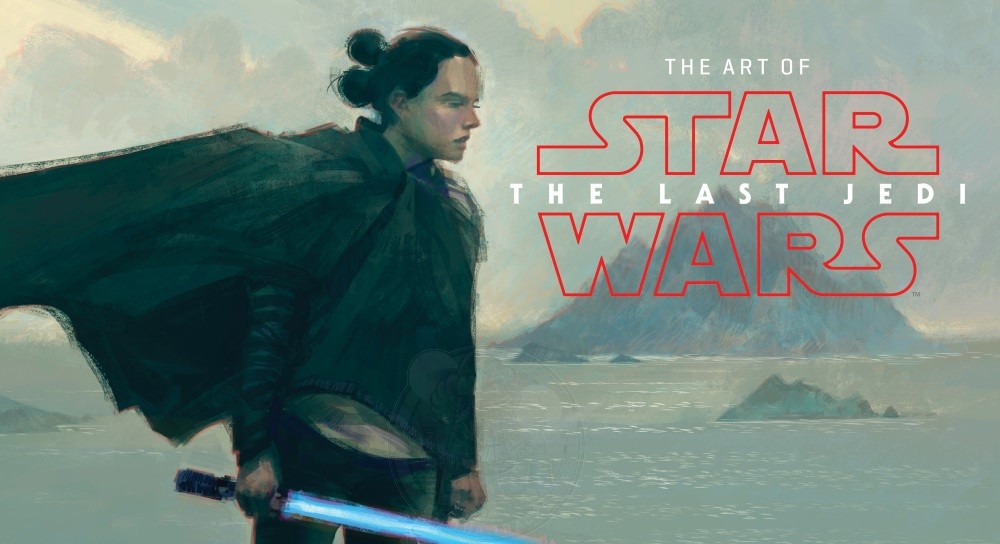 As The Last Jedi demolishes box offices across the planet, one thing becomes clear from Phil Szostak’s detailed and illuminating The Art Of The Last Jedi. While Lucasfilm are keen to honour and touch upon elements of days past, The Last Jedi is keen to tread new ground, opening up a galaxy of 250,000 inhabited worlds and showing us things we’ve not seen before. As our guide through this brave new world, Szostak leads us through the dazzling images created to bring the story of the film to life.

The book kicks off with a foreward by director and writer Rian Johnson, who’s presence is littered throughout the book with side notes and quotes explaining various elements of the film. For example, Johnson saw it necessary to split Rey and Finn up, one of the winning combinations of The Force Awakens. A brave move that could have easily backfired, but think back to The Empire Strikes Back. Get past the opening salvo of Hoth and our heroes are apart for much of the film. The Last Jedi does much the same, with Finn on Canto Bight, Poe fighting aboard the Raddus and Rey on Ahch-To with Luke Skywalker.

As the book progresses it’s clear that Szostak had a healthy amount of access to Johnson and the art department, as the director and his team walk us through all manner of characters – for example, Neal Scanlan describes the matron of the Caretakers as being like British actress Margaret Rutherford (Google her, you will immediately see the comparison) and once again Star Wars dips into real-world references while defining the other-world of the GFFA.

Johnson appeared to have had a clear vision of how he wanted the story to develop, as many of the images in the book closely mirror those seen in the film itself. For example. The development of the Supremacy, the 60km wide Mega Destroyer that looms over the slow chasing down of the Resistance fleet. All images show the vehicle being vast in width rather than length, and all highlighting the enormity of the vehicle, and that remains throughout the design process.

We see that Kylo Ren received a slight redesign in terms of his outfit but also the directorial choice to lose the helmet and focus on the nuanced performance of Adam Driver. Throughout the book we learn such snippets, and every turn layers reasons why we saw what we did in the finished film.

For instance, Kevin Jenkins explains that the look of Snoke’s Throne Room comes directly from an early Ralph McQuarrie concept for his Throne Room in Return of the Jedi, underneath Coruscant. If you’re going to life, lift from the best “Why reinvent the wheel?” says Jenkins, and in this instance he is absolutely right, but the film certainly does change direction from the expectations of many fans.

The book also makes it very clear just how far back the production of The Last Jedi goes. Designs for Canto Bight, Ahch-To and Crait were being realized back in November 2014, over a year before the release of The Force Awakens. A worry for fans concerned that the 3 years required to make a Star Wars film would be crunched need worry no more – with multiple concurrent productions on the go, that much-needed time span is clearly being adhered to.

Canto Bight is given a heavy focus in the book, highlighting the opulent beauty of this Corporate sector world. While much of the action takes place outside the casino, it’s certainly a location fans would like to revisit – imagine the stories going on in there.

As art of books go, this is essential. Taking us through the various developments, tweaks and changes (new helmets for the First Order Stormtroopers, slightly for aesthetic reasons but mostly because the original TFA costumes were practically destroyed) it makes clear that many of the throwaway elements of the film (BB-8 controlling the AT-ST, which feels like it was riffed by ILM in post but was in the script all along) were part of the story from early on. Indeed, between saving Poe and his X-wing at the start of the film, machine-gunning casino chips at Police officers on Canto Bight and this move, BB-8 is more deadly and useful than R2 or BT-1 combined. Just makes us even keener to see Episode IX, with R2 out of his hibernation and hopefully back on form to work alongside BB-8.

The Art of Star Wars: The Last Jedi by Phil Szostak, and Lucasfilm Ltd. © Abrams Books, 2017 is available now from all good book stores, and we can’t recommend it highly enough.

With thanks to the Publicity and Marketing department at Abrams & Chronicle Books Ltd for the review copy.

Rian Johnson at BFI London Film Festival 2019: Knives Out and The Last Jedi