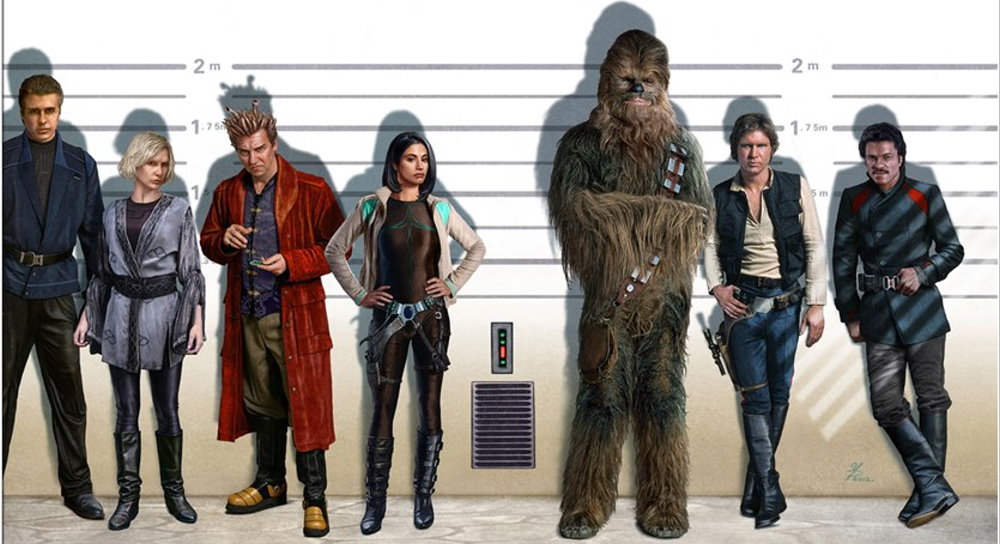 Han Solo should be basking in his moment of glory. After all, the cocky smuggler and captain of the Millennium Falcon just played a key role in the daring raid that destroyed the Death Star and landed the first serious blow to the Empire in its war against the Rebel Alliance. But after losing the reward his heroics earned him, Han’s got nothing to celebrate. Especially since he’s deep in debt to the ruthless crime lord Jabba the Hutt. There’s a bounty on Han’s head—and if he can’t cough up the credits, he’ll surely pay with his hide. The only thing that can save him is a king’s ransom. Or maybe a gangster’s fortune? That’s what a mysterious stranger is offering in exchange for Han’s less-than-legal help with a riskier-than-usual caper. The payoff will be more than enough for Han to settle up with Jabba—and ensure he never has to haggle with the Hutts again.

All he has to do is infiltrate the ultra-fortified stronghold of a Black Sun crime syndicate underboss and crack the galaxy’s most notoriously impregnable safe. It sounds like a job for miracle workers . . . or madmen. So Han assembles a gallery of rogues who are a little of both—including his indispensable sidekick Chewbacca and the cunning Lando Calrissian. If anyone can dodge, deceive, and defeat heavily armed thugs, killer droids, and Imperial agents alike—and pull off the heist of the century—it’s Solo’s scoundrels. But will their crime really pay, or will it cost them the ultimate price?

The first impressions of Scoundrels are that Zahn is pitching to two distinct camps. Firstly, he clearly evokes the underworld vibe of the classic Brian Daley books, a pursuit worthy of praise and while his writing style is vastly different to Daley’s you do feel as if you are ‘down there in the trenches’ of the underworld with Solo and Chewbacca. But the prime pitch of this book is famously ‘Star Wars meets Ocean’s 11 (the book was initially titled Solo’s Eleven, a title which would have been too on the nose) and in this regard he certainly scores. 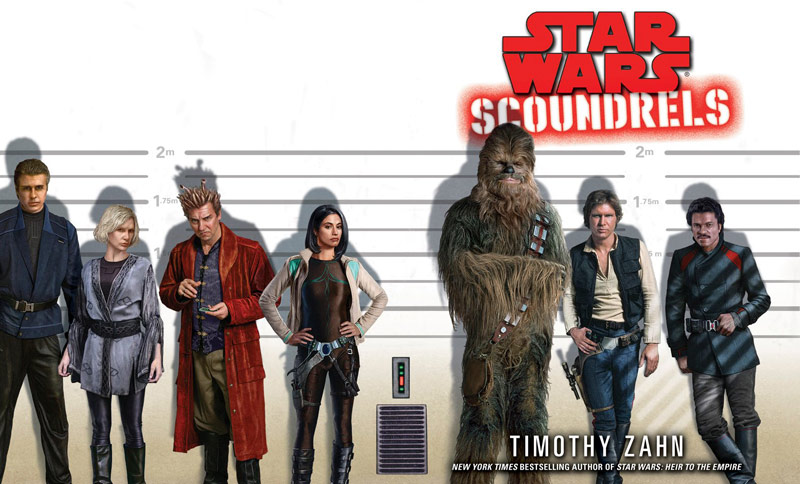 Han and Chewie stumble across a heist whilst in Reggilio’s cantina on the planet of Wukkar and are soon assembling a team of fellow underworld types to pull off the job of the century; recover 63 million credits stolen by a Black Sun operative from a wealthy shipping magnet, who was killed in the process. The son of the magnet, Eanjer Kunaraztri, agrees to split the money between himself and the team recovering the credits and over the course of the first few chapters Solo travels from Wukkar to Kailor and brings together information broker Rachelle Ree, ghost burglars Bink and Tavia Kitik, trickster Zerba Cher’dak, ship thief Dozer, Winter and Kell (characters familiar to EU readers) and none other than hard up gambler and con man Lando Calrissian. 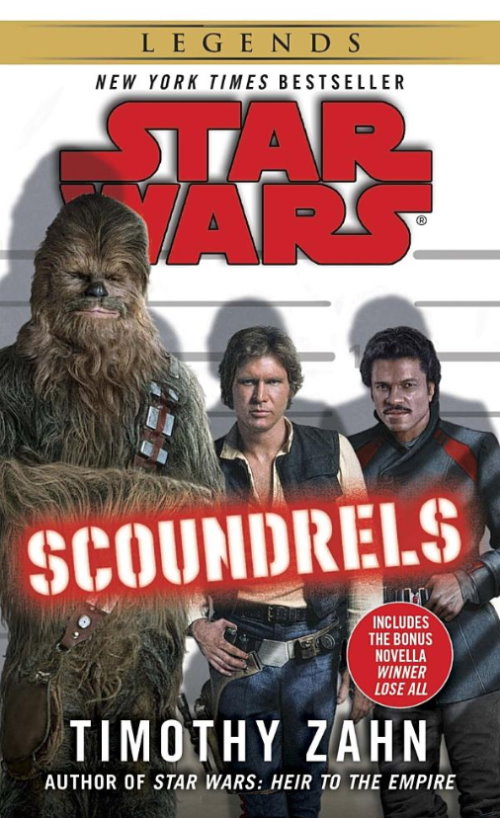 However, this is more than a simple bank job. They need to boost the creds from under the nose of Black Sun sector chief thief Avrak Villachor, ensconced in his nigh impenetrable estate during the Festival of Four Honorings while other interested parties including Imperial Intelligence plan their own heists and all while Black Sun vigo Qazadi is present. It’s a twisting, looping plot (with a killer twist at the end) that takes its time to unwind, all the while giving each character time to shine and develop. And thankfully Solo, while clearly being in charge of the operation and showing leadership qualities the Rebel Alliance will put to good use years later in Return of the Jedi, doesn’t completely overshadow the story. This is definitely a group effort, with each skilled member having a key part to play, very much like its clear inspiration Ocean’s 11.

Another Ocean’s 11 similarity is the ever present potential for each of the characters to screw each other over, given the skills and opportunities afforded to the characters, but this is a tight group and while there is clear tension you don’t sense any betrayal. There’s a broad array of skills on hand here and like a pyramid of cards any one of them could collapse and take the whole team down with them. Certain characters seem to talk a bigger game than they can deliver and others, such as Dozer who is brought in to front the job and then grudgingly takes a back seat when Calrissian appears, seem slightly at a loss. It’s an interesting mix of mutual appreciation for the skills in the room and over- swollen egos that threaten to run out of control.

For Zahn, while this is a story that is smaller in scope than his usual faire in the Star Wars universe he still flexes his influence and establishes a number of interesting plot points. Without giving anything away, it’s no secret to readers of this novel that Solo and Chewie don’t make millions and millions of credits from the deal. Sitting between A New Hope and The Empire Strikes Back we know that Jabba the Hutt is still angry with Solo and hunting him down via a sizeable bounty, so a happy and lucrative ending isn’t on the cards, but with Scoundrels the joy isn’t in the destination but the journey. Zahn once again presents a number of very attractive characters and locations that you’d like to think he will return to in time via future novels, ebooks or Star Wars Insider short stories. 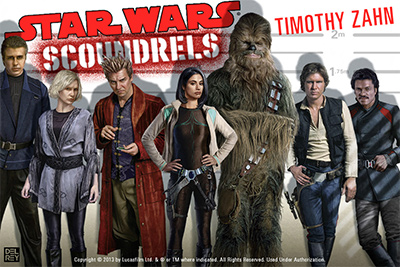 Bink and Tavia are intriguing, their differing personalities and absolute identical looks making for an engrossing counterpoint. Zerba and his gimmicks are a colourful addition and Dozers sarcasm is well placed in an underworld full of smart alecs. Rachelle is a competent confidante for Solo, a character who he clearly trusts and knows her stuff. Imperial Agent Dayja is an interesting character, who we see first in the opening chapter aboard the ISD Dominator working for Lord D’Ashewl and who throughout the story works his way into the Marblewood Estate on a mission for Imperial Intelligence. And there’s Black Sun Sector Chief Avrak Villachor, who receives the biggest turnaround in fortune. Almost no one gets out of this with anything other than further headaches, but for the readers it’s a blast.

The pacing of the book is leisurely and takes it’s time telling an intricate story that, for Zahn at least, is on a relatively small scale, but that pacing allows us to get insights into plot and character points that faster paced books may have skipped. There are some real gems in there for those looking closely enough and as I mentioned before I’d certainly like to revisit some of these characters in the future. As a stand alone novel it works brilliantly, but I suspect there will be more tales set in the underworld of this nature and for that Scoundrels has a lot to be thanked for.