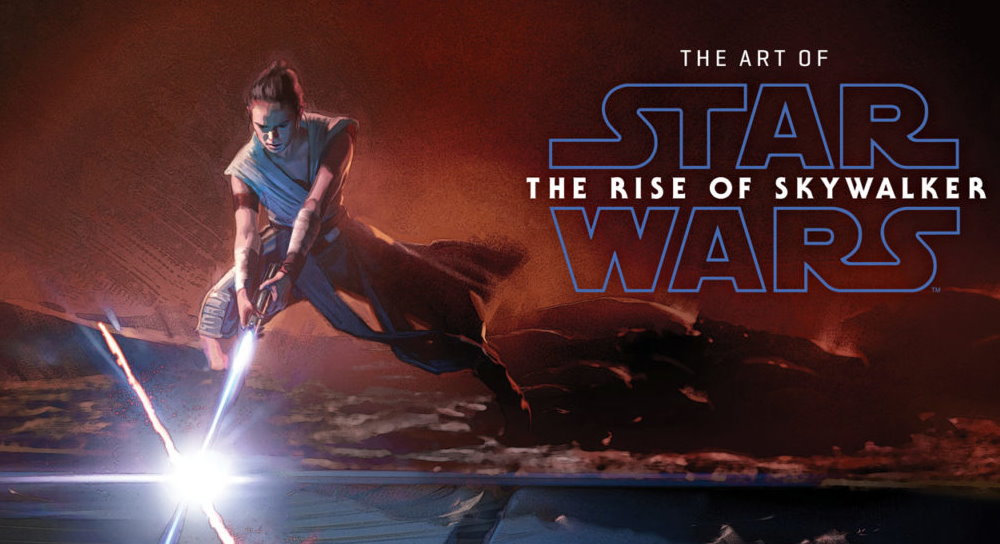 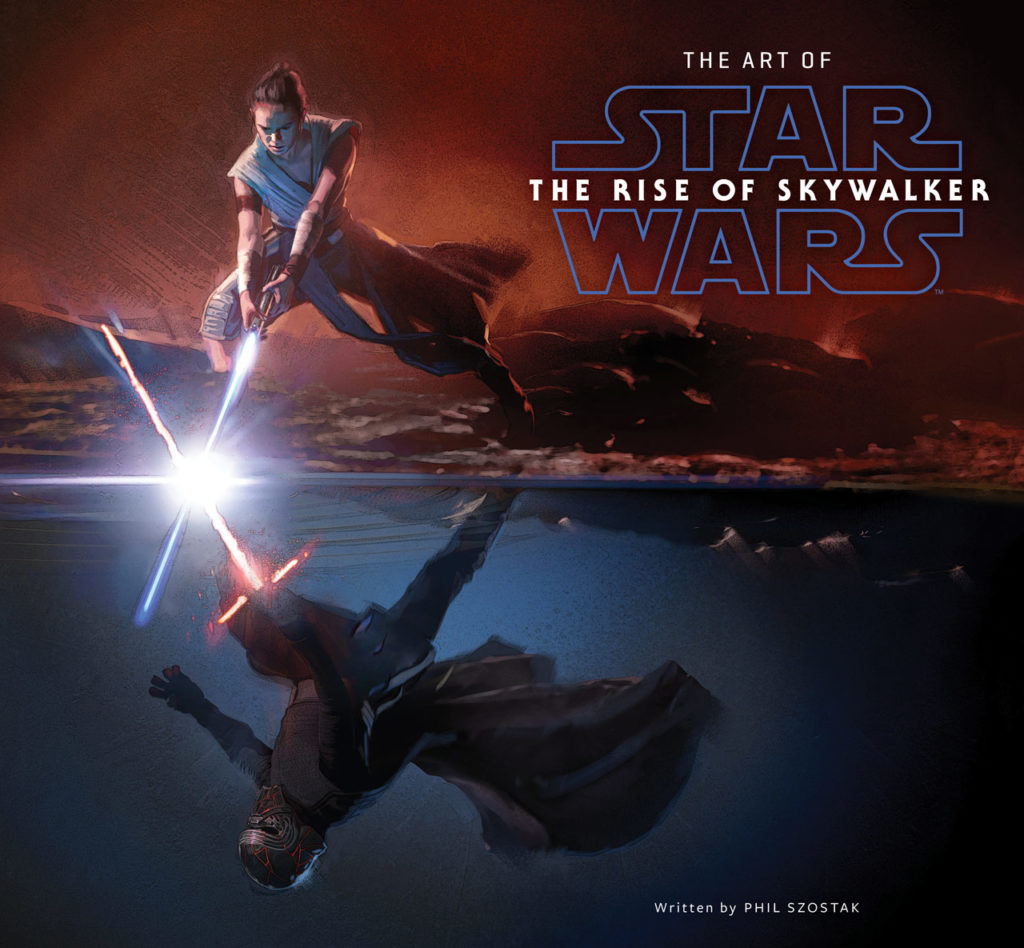 The Art of Star Wars: The Rise of Skywalker

The official behind-the-scenes book of concept, production, and post-production art for Star Wars: The Rise of Skywalker.

Go inside the creative process behind the most anticipated film of the century. The latest trilogy in the Star Wars film series brings the Skywalker Saga to a close and The Art of Star Wars: The Rise of Skywalker will take readers into the creative process behind visualizing the epic worlds, creatures, characters, costumes, weapons, and vehicles of the landmark conclusion more than 40 years in the making.

Once again written by Lucasfilm’s Phil Szostak, the author behind the Art of books for The Force Awakens, The Last Jedi and Solo and graced with a forward by Lucasfilm’s creative director Doug Chiang, The Art of Star Wars: The Rise of Skywalker lays itself out as beautifully as all the books that have preceded it, giving us an invaluable peek into the creative process and waves of design that whittle away the greelwood down, down, down into something that belongs in the galaxy far, far away. Fans have been graced with these releases since Carol Titelman‘s original The Art of Star Wars way back in November 1979, a book that opened the door for fans to connect the script to the luscious designs – many by the great Ralph McQuarrie – and see how many revolutions it took to find the characters we know and love so much. As it has always been, the story of Star Wars is far from first-draft, nailed-it-in-one effortless creativity. The Art of Star Wars: The Rise of Skywalker – just like the many Art of books that precede it – shows just how hard-earned their fleeting seconds on screen are.

There is a worry as the pages are turned on this lavish release, that a fandom currently  more attuned to bemoaning what it didn’t get rather than celebrating what it did will only find disappointment and dissatisfaction with what lies within. If that’s the case, then it’s a genuine shame because while the vast percentage of what we see here didn’t arrive on our screens in the final weeks of the last decade, there’s a LOT to gaze lovingly at here.

The introduction by Szostak includes a great quote from LFL design supervisor James Clyne, who makes clear the distinction between Star Wars and other sci-fi environments; “Star Wars doesn’t live in the future, it lives in the past.” Of course, he’s right – it’s a long time ago, far, far away – but beyond that Star Wars is unique in that it’s evolved over its four decades toi become a self-referential ‘thing’ of its own. Star Wars has such depth, in every direction, that the designs do have waypoints; we know when it feels right as a Star Wars creation and can spot immediately when it doesn’t, but the aesthetic, the feel, the grit that embeds a Star Wars creature, vehicle, planet into the wider fabric of the GFFA takes its cues from the real world of the Second World War, the grime and much of ‘real life. As Clyne says, “That’s our world.”

To the book. Opening with a look back to Episode 8 we dive into the costume department giving us looks at Leia and the outfits that would bring Carrie Fisher’s unused performance from The Force Awakens into the ninth and final chapter of the Skywalker saga as well as numerous versions of Rey’s costume by Glyn Dillon. We also have a fascinating – increasingly fascinating, given the years and events that have passed since – look into an Intellectual Property Development Group meeting on 21st May 2014 (the 34th anniversary of The Empire Strikes Back no less) which included Pablo Hidalgo, Kiri Hart, Dave Filoni, Dennis Muren, John Knoll, Gary Rydstrom, Jason McGatlin, Doug Chiang and Szostak. It’s fascinating in the sense that one of the through lines for the trilogy was being discussed just a week after The Force Awakens had opened; where would Leia’s story lead her, how would she affect the final outcome of the trilogy, what if Leia was the one to reach out to Kylo. Slender threads, but a strong indication that while Han tried his best, Leia was always going to be the one to reach Kylo and pull him from the brink. “No, there is another” played out 33 years after Yoda spoke on Dagobah.

The McQuarrie and John Mollo influence is strong and clear – as it should be – from the ragtag pilots who fight for the Resistance to the new look for Lando, influenced by his striking yellow Solo outfit. All through there are layer upon layer of designs, from a plethora of designers all tuning in to that essence that makes Star Wars what it is. Yes, Kylo may have smashed his helmet in Episode 8, but the restoration of that helmet went through a variety of designs. Gold and silver were considered before the striking red kintsugi look was chosen, and as we turn the page to a spread of dark Rey, a glimpse into a fleeting moment from the film that is brimming with delicious possibilities, the book delivers even more synapse-sparking images.

It would be all too easy to go through the book page by page, marvelling at the depth and levels of design here, but to lift this hefty tome and let the book open to a random page is every bit as satisfying. Page 136, Rey training on Ajan Kloss, page 156 the bog swamp creature on a Mustafar that is less volcanic and crusting over. As Rick Carter says, “This storyline has things that are still just being connected now.” The designs of the film predate the finalised story structure, so images become options, aids in a patchwork design process that builds through departments towards a cohesive whole. As each chapter kicks off with valuable information and detail from Szostak, you see the ensemble come together. There can be few collections of books as handsome on the shelf as the sequel trilogy Art of books, so hats off to Chronicle and Abrams for ensuring their design is so pleasing and their spines match up so effortlessly (a small detail perhaps, but a pleasing one). In time, perhaps a Making of series will shine even more light on the latest era of the Star Wars story, but until such a time arrives we have these delicious collections of images from the galaxy far, far away to tide us over. If you’ve not ordered your copy yet, do so now, you won’t regret it.

For our review of The Art of Star Wars: The Rise of Skywalker listen to the latest episode of Making Tracks.