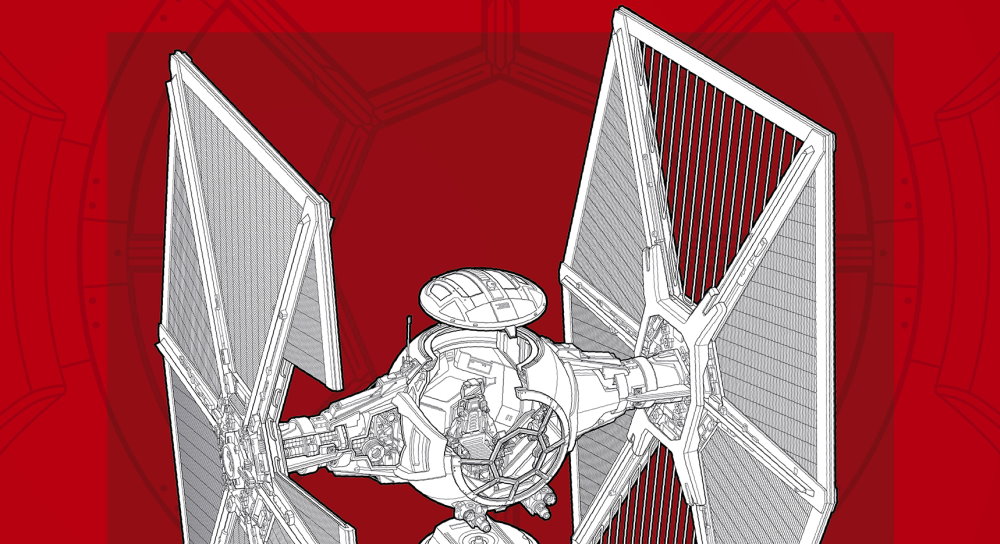 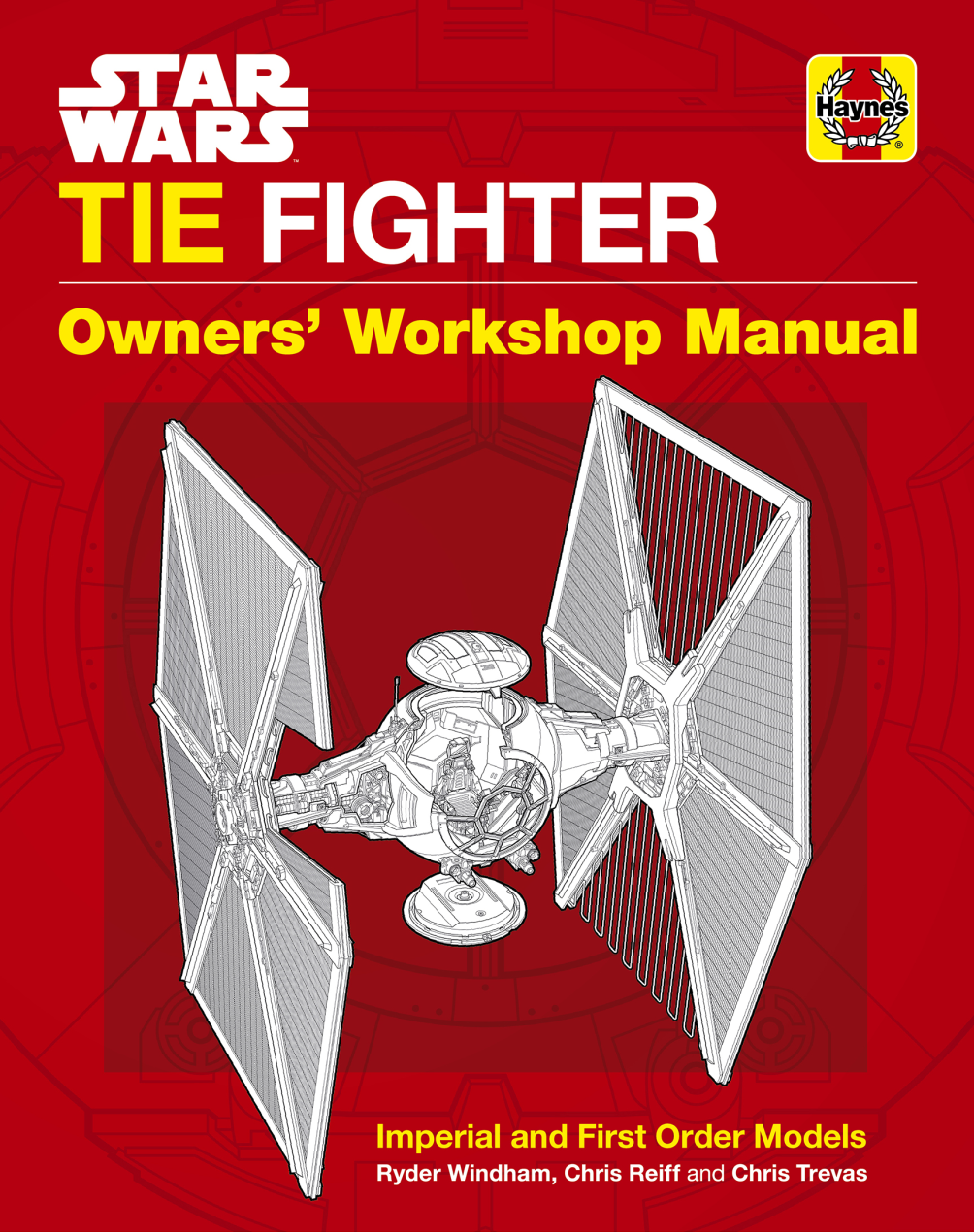 This is a Haynes Manual based on the Sienar Fleet Systems TIE Fighter, the iconic space superiority fighter which has long been the mainstay of Imperial and First Order forces, customised variants of which were piloted by Sith Lord Darth Vader in the original Star Wars Trilogy, and Kylo Ren during the First Order’s war with the Resistance.

Using brand-new cutaway illustrations, together with other art and photographs, this manual provides the most thorough technical description and operating guide available for the various TIE Fighter variants, making it essential reading for all Star Wars fans.

Fully authorised and approved by Lucasfilm.

Following the recent release of the YT-1300 Corellian Freighter Owners Workshop Manual it’s time for the forces of the Empire and the First Order to get some technical ecstasy as Haynes and Insight Editions hurl us into the TIE fighter fleet at breakneck speeds with this, the TIE Fighter Owner’s Workshop Manual.

One of the most pleasing aspects of these in-universe manuals is how much they resemble the actual Haynes manuals that have been indispensable tomes of knowledge for grease monkeys and mechanics since 1960. It’s easy to imagine an ‘actual’ Imperial technician browsing though one of these manuals to sort out any number of issues and problems. As such, the book opens with the origins and development of the TIE fighter series, taking its cues from Darth Maul’s Scimitar, the ETA-2 Jedi Starfighter and the V-Wing – amazingly, the TIE is an ancestor of the alphabet series of Republic and Rebellion vessels. These nuggets of info and more are scattered throughout the book. 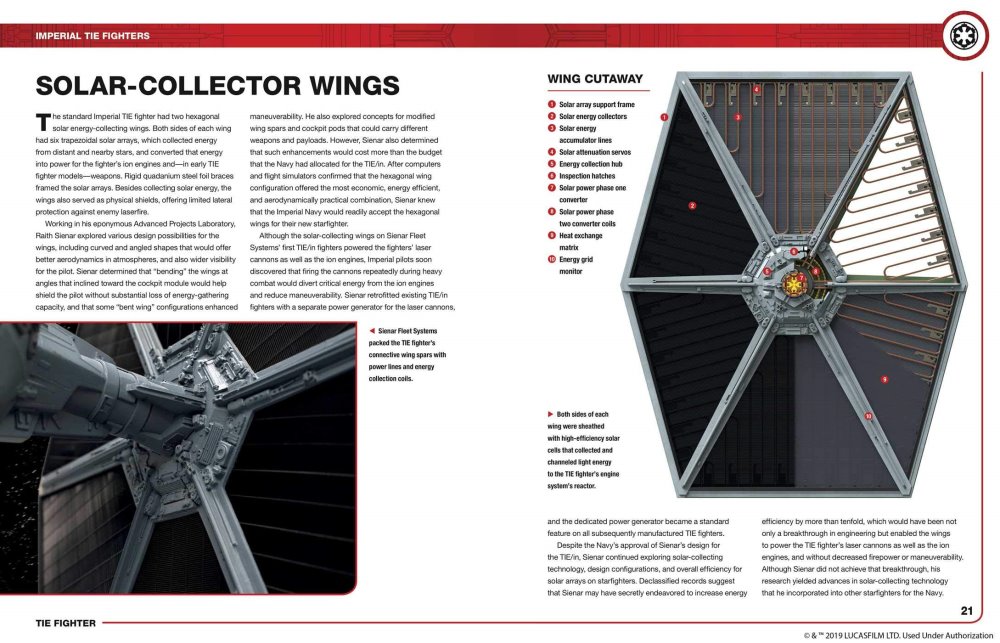 Naturally the heaviest focus is on the classic TIE/in Space Superiority Starfighter that we first got to know so indelibly in A New Hope (all 4.6 million of them). We look at it’s unique Solar Collector wings, the globular cockpit and flight controls, the targeting computer and ion engines (but no hyperspace or shields – eeek!) We even get some beautiful retconning, with the Colin Cantwell TIE Fighter with the much smaller cockpit, wider struts and wings and the stubbier, Ralph McQuarrie style Star Wars Rebels version of the TIE included in the lineage of the series. 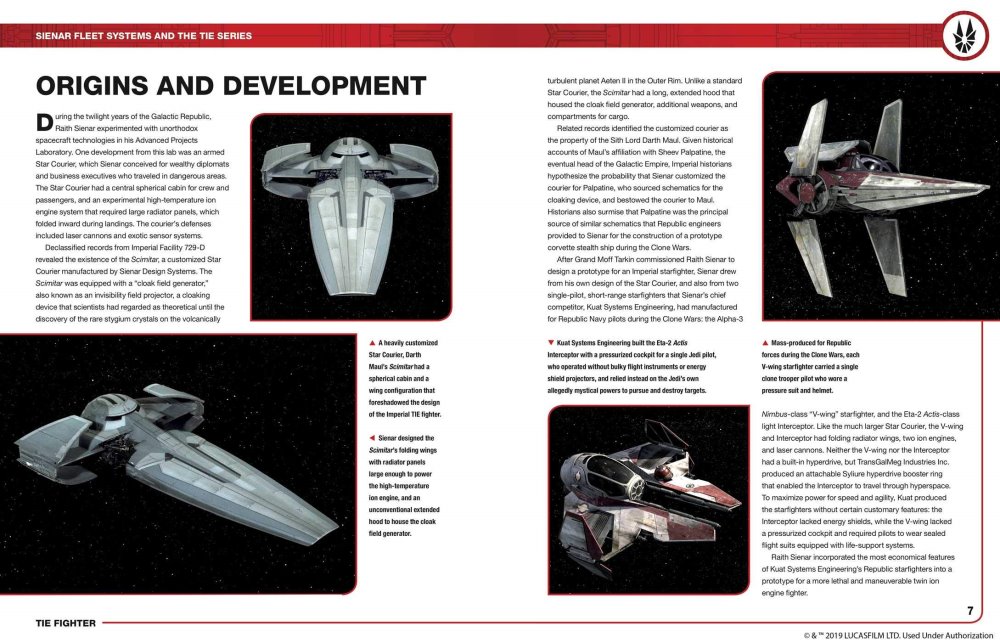 We then head on out into the wider TIE fighter series that through the original trilogy and Legends / EU era as well as Rogue One and Solo. The TIE Brute from Solo (still no shielding but reinforced armour) the TIE/sa Bomber from The Empire Strikes Back (which in a  very West End Games style bit of info we learn would set you back 150,000 Imperial credits) and the TIE boarding craft from the end of Rogue One (able to carry 20 Stormtroopers) 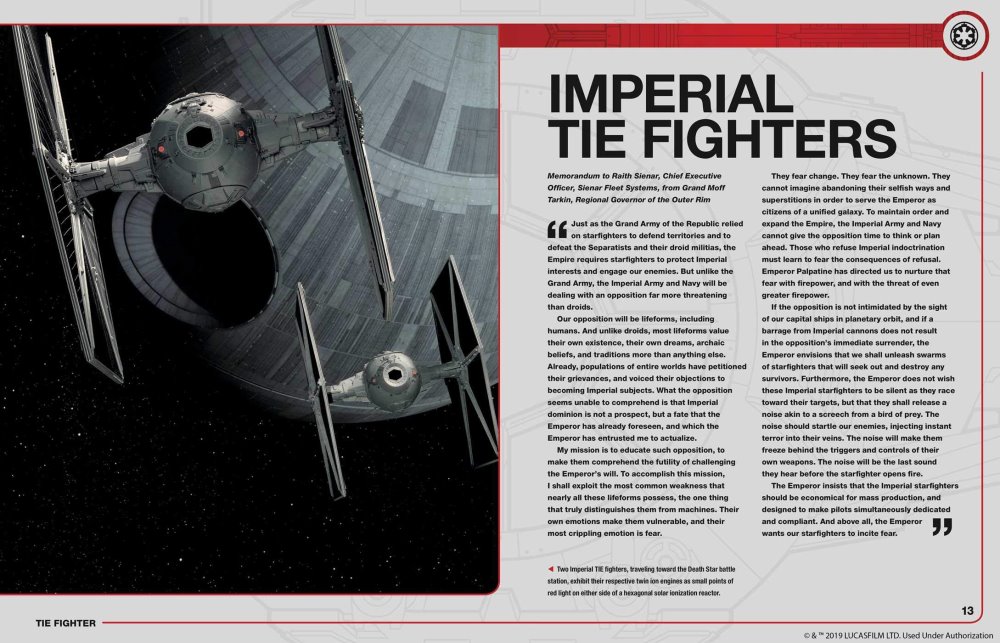 Page 42 gives us a fascinating tidbit of info that many wouldn’t know. The shuttle which transports Captain Needa from his Star Destroyer across to the Executor was a TIE Command Shuttle. While still not equipped with hyperdrives, these ambassadorial vessels were fitted with shielding. The Inquisitors TIE Advanced v1, Darth Vader’s TIE Advanced x1 (class 4 hyperdrive AND shields for the dark lord). It’s surprising when you look at it, how many variations on a theme we’ve had over the last 40 years.

As well as the Gozanti cruiser that deliver TIE fighters into the arenas of war via hyperspace, we also look at the far superior TIE’s of the First Order, with the standard, special forces (look for the red stripe) the TIE Silencer of Kylo Ren (310 thousand credits if you’re brave enough to try to buy one) and even the gear they wear and the training academies.

Once again Ryder Windham, Chris Reiff and Chris Trevas enrich the Star Wars story with another invaluable release that gives depth and detail to what could be considered relatively unimportant, but consider this – how many great Star Wars action moments involve TIE Fighters? We’d never deign to never tell you the odds but trust us, it’s quite a few.

Many thanks to Insight Editions for the review copy.