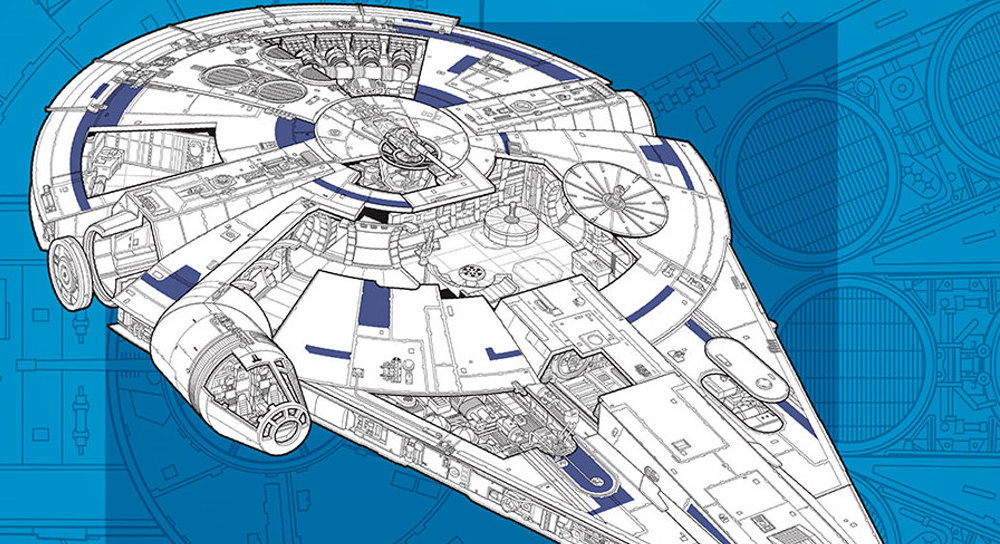 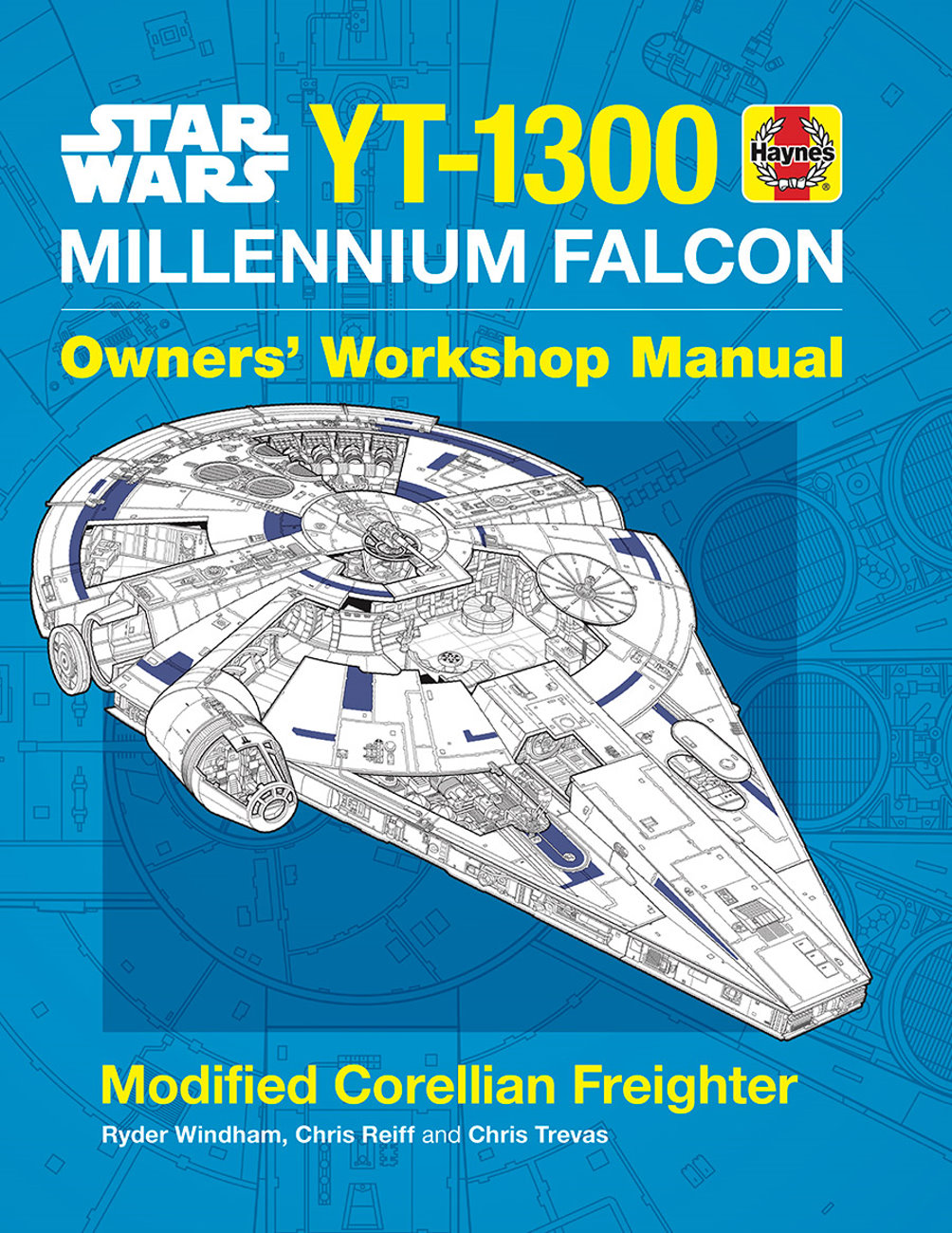 This manual is a comprehensive technical description and maintenance guide, covering the Star Wars YT-1300 freighter , of which the Millennium Falcon is a derivative.

Covering the ships appearing in the original ‘classic’ trilogy of films, plus The Force Awakens, The Last Jedi, and Solo movies, this comprehensive reference book offers a unique insight into the history, construction, systems, maintenance and modifications of each craft in the YT-1300 range.

Fully illustrated throughout with new, specially commissioned cutaways and artwork, plus drawings and photographs from the Lucasfilm archive.

When the original Millennium Falcon Owner’s Workshop Manual came out a few years back, fans of the fastest hunk of junk in the galaxy were rightly thrilled that all the nitty-gritty, deep down details of Han Solo’s beloved freighter were now readily available to browse through at leisure, allowing us the luxury to not only measure her up against other vessels in the Star Wars galaxy but also to walk the corridors of the ship and feel even closer to a vessel that’s as much a part of the fabric of Star Wars as any living, breathing character. 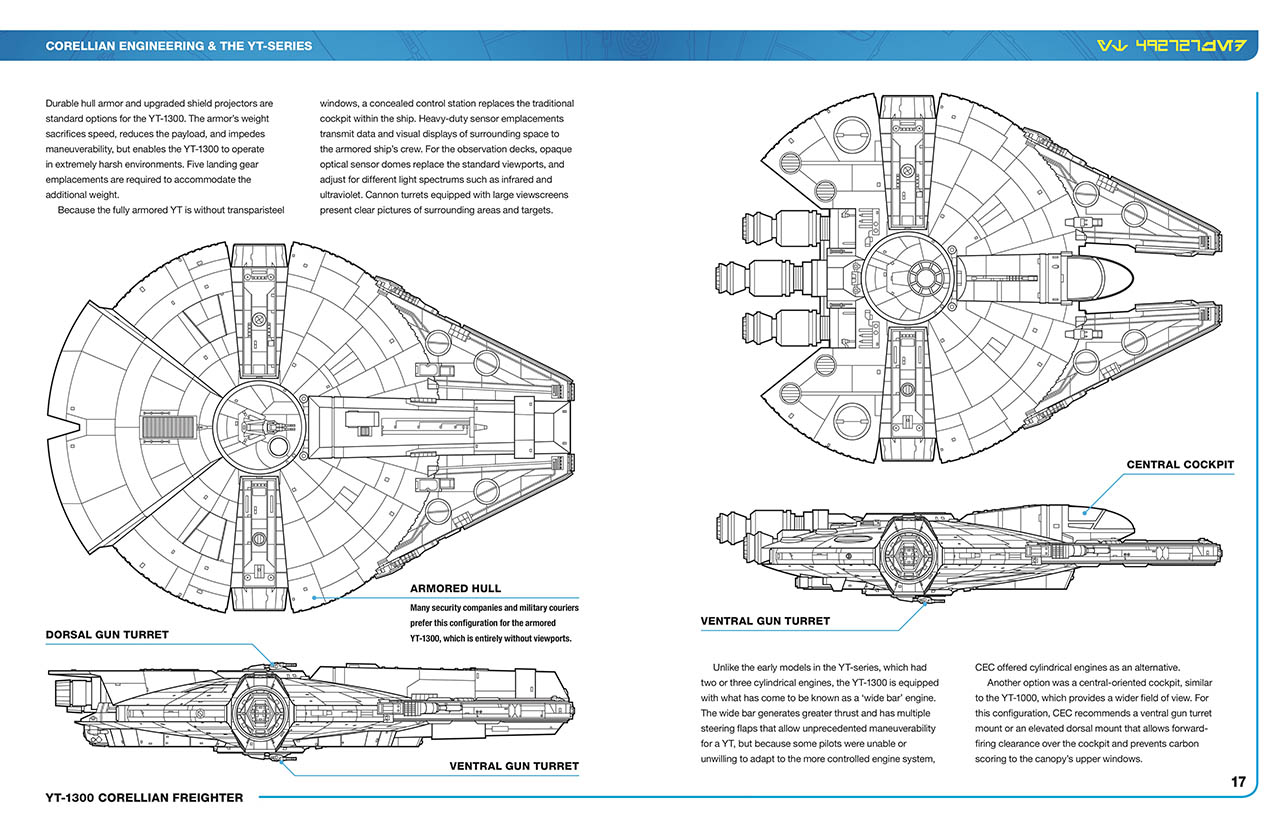 The last four years have given us an even deeper look at the Falcon, via The Force Awakens, The Last Jedi and Solo: A Star Wars Story and it’s with that freshly minted Falcon that we open the page on the updated edition of the Workshop Manual, subtly renamed the YT-1300 Corellian Freighter Owner’s Workshop Manual which broadens the horizons of the first book by looking at the model of the ship rather than the iconic ship itself and by doing so shows off the malleability of the design and why it was a workhorse for those traders eking a living out on the peripheries of the galaxy.

The book opens by giving us a look at the various iterations of the YT series, with differences in landing gears and internal configuration as well as showing a variety of options for the mandibles at the bow of the ship. Sometimes it can carry cargo containers, while other times – as Lando Calrissian preferred – it can hold a YT Dart which doubled up as a hyperdrive capable two-person escape pod. We even get a dig into the YT_2400, made famous over 20 years ago by Dash Rendar in Shadows of the Empire.

We then get to the bread and butter of the book, the Millennium Falcon itself, exploring its time under the ownership of both Lando and L3-37 and Han Solo and Chewbacca before veering into true Haynes Manual territory as we look at the technical aspects of the ship, how to fly her, propulsion systems, weapons and defense, engineering, sensors, crew facilities and a handy size comparison chart.

If you have any interest in the Falcon, this is the book for you and in the safe hands of Ryder Windham, Chris Trevas and Chris Reiff it’s a treat to read and browse through.

Many thanks to Insight Editions for the review copy.