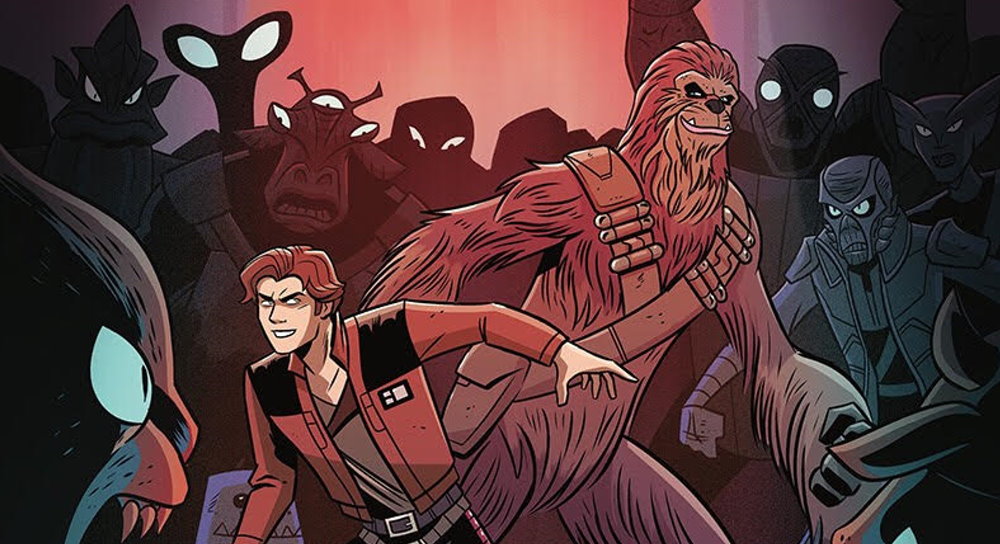 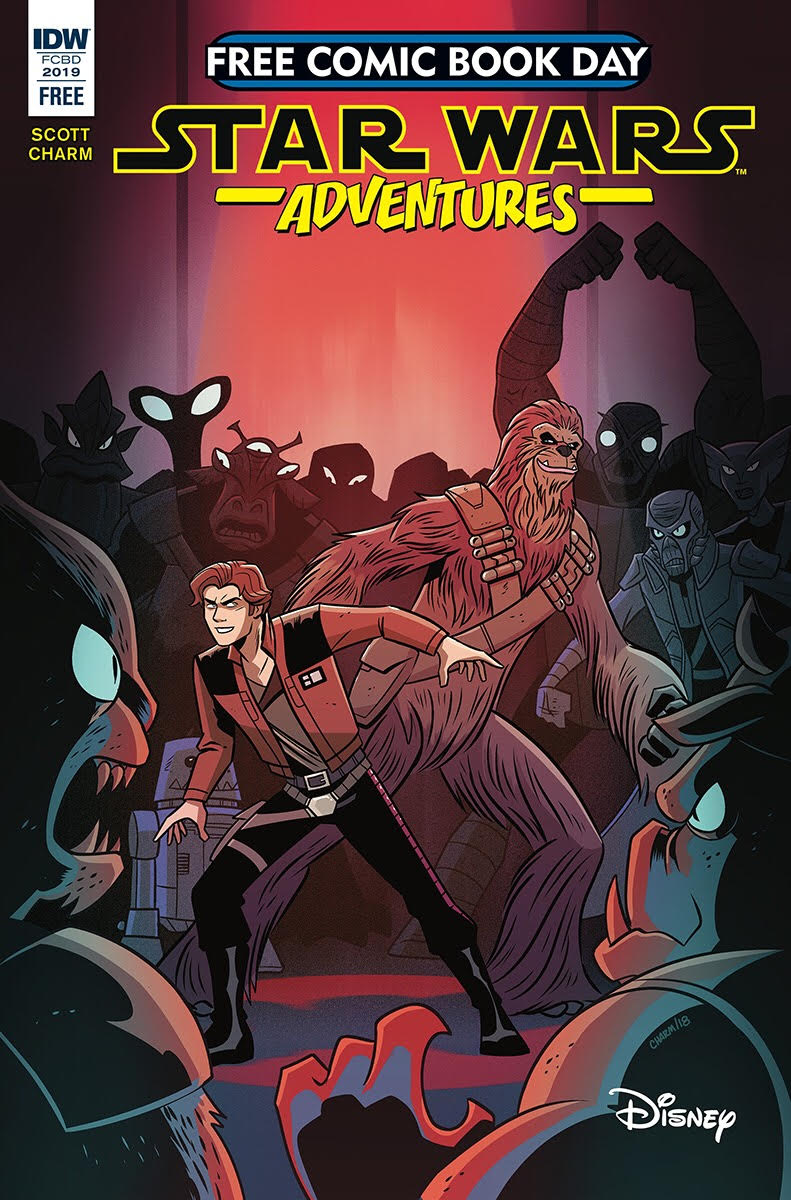 The stars have aligned: This year, Free Comic Book Day coincides with Star Wars Day! Han and Chewie race against pirates in a search for one of three identical droids that contain the location of a legendary treasure.

But what our favorite smugglers don’t know is the other two droids are booby trapped!

Trickery and double-crosses abound in this original story set before A New Hope!

May the Fourth be with you!

The good fortune of Free Comic Book Day falling on Star Wars Day brings us an additional story from the Tales from Vader’s Castle featuring Han and Chewbacca. However, the occasion is bittersweet with the passing of Peter Mayhew (May The Force Be With You, Peter and Thank You).

Droid Hunters is a ray of sunshine during this time of loss and reminds us “No one is ever really gone”.  The tale catches up with the crew of the Auric as CR-8R tells the parable of Droid Hunters to Lina Graf which may explain the disappearance of Lieutenant Hudd.  The theme of the tale is played of off Tolkien’s “Not all that glitters is gold…” only in the Star Wars galaxy, “Not all that glitters is aurodium…”.

Our favorite scoundrel and his loyal companion are in The Labyrinth, a bar on the planet of Kelada, about to embark on a job for Jabba the Hutt.  In the process of tidying up their tab, they witness a scuffle between an elderly Azumel and a gang of thugs.  Our hero steps in and becomes entangled in a hunt for the treasure of Rane Mahal, a legendary pirate queen who had disappeared.  The map to her treasure lies in one of three jewel-encrusted droids that lay scattered across the galaxy.  Two of the droids are booby-trapped to foil would-be treasure hunters.  We follow along on the wild chase for the pirate hoard and Han’s resolve leads to a lesson learned.  From the former Tales from Vader’s Castle, we know it is a lesson learned too late for Thom Hudd.

I was caught unaware the issue featured a Tales from Vader’s Castle story and excitedly read through the it almost as soon as I had it in hand. Unlike the previous issues, apart from the fifth issue The Terror of Darth Vader, this story does not appear to parody a popular horror story like The Wicker Man or The Haunting of Hill House.  This is the second appearance for Han and Chewie in this series, the first The Briar Witch was featured in the third issue.  I didn’t think the series could get any better, but this story proved me wrong.  The story was a joy to share with my Padawans, whom (as I say millions of times before) always anxiously await the next Adventures issue each month.

Han Solo and Chewbacca are particularly unique because their backstory is limitless.  You can imagine the pair in all kinds of situations.  If the mystery of their life before meeting them in the Cantina on Mos Eisley wasn’t enough, Solo: A Star Wars Story offers another infinite pathway of stories leading up to their meeting on Mimban.  Granted the same can be said of each character but this iconic duo (and Lando Calrissian) are particularly unique due to their character’s nature.

If you missed your chance to pick up a copy on May the 4th, I recommend tracking one down as soon as you can.  The initial five issues were just released in the trade paperback version but there may be an updated version released later down the road.  Han and Chewie stories never fail to entertain and Cavan Scott, Derek Charm, and the entire creative team at IDW continue to put out great material.  Next Wednesday is just around the corner and features a new issue for Star Wars:  Adventures!