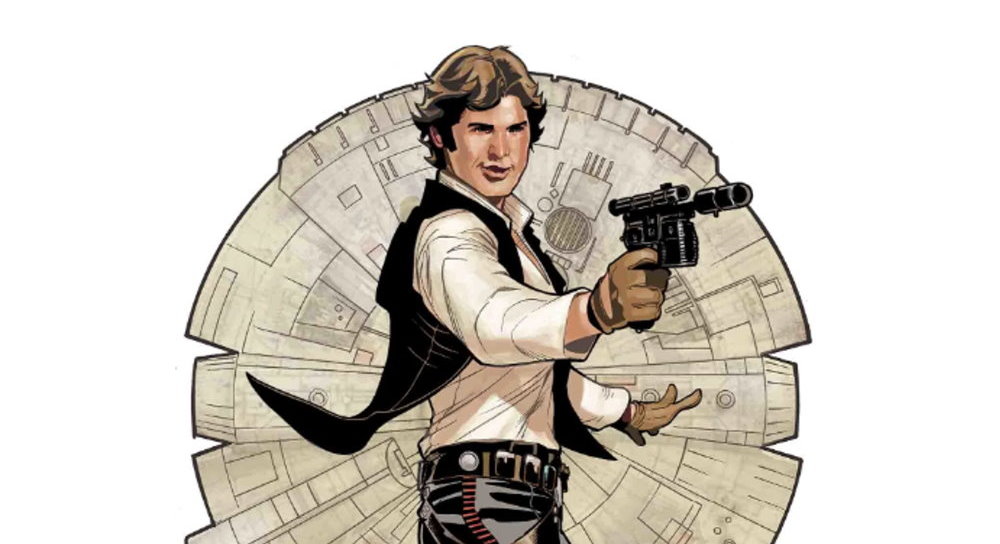 RUNNING FROM THE REBELLION

The heroic Rebel Alliance has recently won its first great victory against the evil Galactic Empire…thanks to the infamous smuggler Han Solo and his Wookiee companion, Chewbacca.

At least, that’s the way HE sees it! It’s time to cut and run and return to their roguish ways….

One of the treats of reading a lot of comics and stories over the years is seeing how different creators and artists tackle the characters of the saga. Some prosper with original creations, others are more skilled at finding the voices of classic, much-loved characters while some entirely miss the mark. Writing Luke in the style of a prequel era padawan during the years between A New Hope and Empire, battling with his lightsaber and having mastery over the Force, is inaccurate when we see him barely able to move a lightsaber hilt in the wampa’s cave and cautiously learning his trade under the tutelage of Yoda on Dagobah – his undoubted skills as a pilot would have been at the fore, not his developing connection to the ways of the Force.

Leia was a princess of a dead planet, a no-nonsense diplomat and senator. Never a maiden in distress, always the smartest in the room, an idealist ready to throw fists and grab a blaster or the helm of a starship but primarily a leader. Boba Fett was a man of few words, Vader an intimidating brute, and Han Solo….well, how do you describe Solo?

Far more complicated than some would have you believe, he’s the cynical everyman heart and soul of the original trilogy (no Force powers, no privileged upbringing) and The Force Awakens. Highly skilled, his own best salesman, a braggart who flinches at compliments, Solo: A Star Wars Story did a masterful job of putting in place the elements that made Solo the character we knew in A New Hope and this entry in the Age of Rebellion series picks up on that and spins a yarn that takes place not long after the Battle of Yavin which feels tonally in place with the choices Solo had to make and how the pull of the Rebellion just wouldn’t let him go.

We join the story on the world of Balnab in the Bright Jewel sector of the Mid Rim near Ord Mantell where the Falcon is holed up, further in to the interior than Yavin 4 on the other side of the Hydian Way. The money they were promised is delivered and Solo is ready to leave their heroic sojourn behind them and return to the lanes and their smuggling career, but Chewie seems less than convinced. Luke appears, asking Solo to do one more job for the Rebellion and as the issue progresses we see how Solo is worn down by the weight of his actions which at the start are a burden he doesn’t want and by the end a badge of honour. He just can’t help helping people, even at the cost of his own aspirations and personal wealth.

Unlike many of the previous Age of issues, and despite being tightly bound by continuity, the issue shows character development and growth. Before Solo, his arc was clear, taking us from the selfish man without a cause in A New Hope to giving Lando the keys to the Falcon in Return of the Jedi. Solo showed that Han always had a heart, fighting for what’s right and that thread would continue right through to The Force Awakens when he couldn’t help but involve himself in Rey and Finn’s mission, ultimately bringing him to Leia, Starkiller Base and his death at the hands of his son Ben Solo.

There are unexpected moments for Solo. He breaks up a fight, not with his fists or Chewie, but by reputation as Rebel officers and smugglers clash. He’s almost embarrassed – as he once told Qi’ra, he’s the bad guy, not the good guy – but can’t resist taking on another job in concert with his alliance responsibilities, and it’s in this that the growth shows. He’s prepared to make money for himself at the cost of Luke’s cargo, and Chewie is not best pleased, but as the story develops it’s clear that he would have never done that. When the seventeen thousand Imperial credits for the Alderaan job are all he has to get back Luke’s cargo, this minor journey is complete and accepting a job to Kiros in the Expansion seals the deal. He may grumble and gripe, but for now at least he’s running for the Rebellion, not from it.

The issue moves us around, from Balnab to Troiken in the Outer Rim at the end of the Perlemian Trade Route and back to Calumdarian before heading to Kiros, and it’s satisfying to note that apart from Calumdarian, all of these worlds have been seen before (Troiken in Inside the Worlds of Star Wars: Episode I, Kiros in the Dark Horse The Clone Wars comic series and Balnab in the sixth episode of season four of Star Wars: The Clone Wars Nomad Droids). Star Wars has a vast and defined galaxy to play in, but without an Essential Atlas project to stay on top of the numerous new worlds being constantly added via comics and books, to see existing planets revisited and expanded makes good sense (and yes, I’d give body parts to be involved in a galaxy mapping project).

Greg Pak does a stellar job with this issue, clearly enjoying the job of writing classic era Han and Chewie, and the art by Chris Spouse and Karl Story complemented by lush colouring from Tamra Bonvillain just makes me want to see more. I’d be more than happy to see this continue as an ongoing series, and as Age of Rebellion: Boba Fett looms I’m very keen to see what Pak does with the verbally economically bounty hunter.