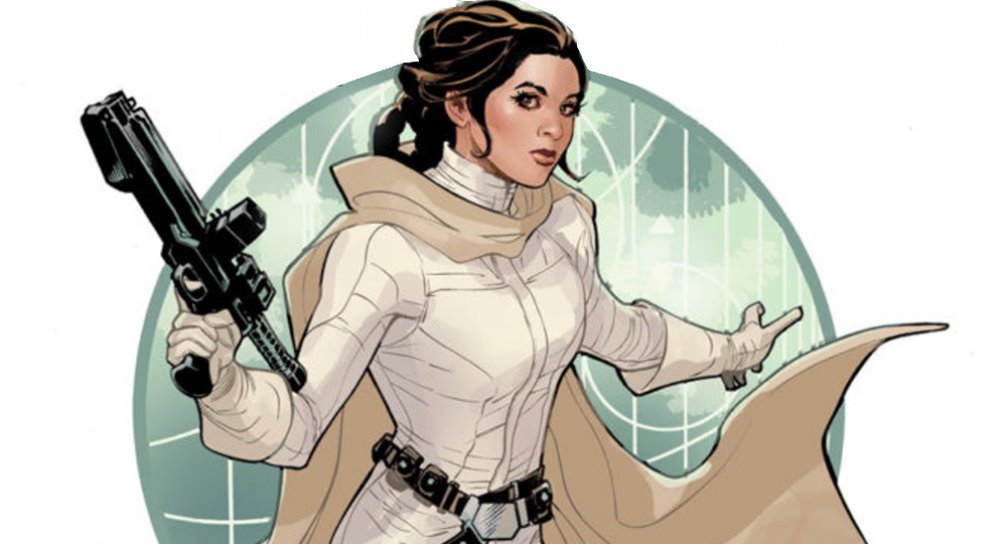 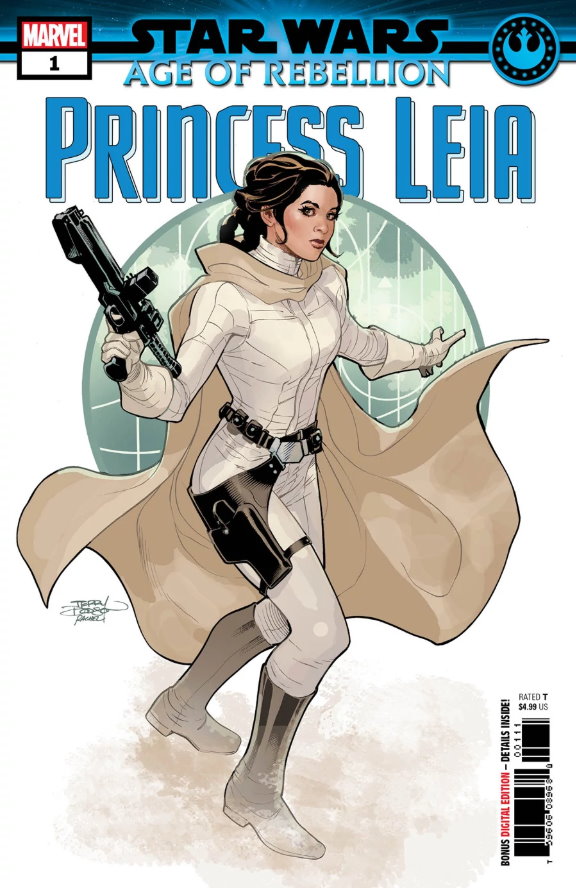 With HAN SOLO frozen in carbonite in the palace of JABBA THE HUTT, PRINCESS LEIA prepares for a daring rescue by taking on the identity of the bounty hunter BOUSHH.

But in order to succeed, she’ll have to prove herself in her new identity to the ruthless bounty hunter BOSSK! With her life and all of her principles on the line, how far will Leia go to rescue a scoundrel?

Co-starring CHEWBACCA and LANDO, who almost certainly have a bad feeling about this!

With the uneven Age of Republic now behind us, can Marvel find some consistency in the familiar territory of the original trilogy era? On the basis of this first entry in the Age of Rebellion series, sadly the answer is no.

One of the many strengths of the original trilogy characters was not only their ability to work together as a team but also their understanding of each others skill sets. Why send in Han Solo to negotiate with the enemy if you had a strong-willed skilled orator like Leia Organa on your team, task Chewbacca with taking out a squad of Stormtroopers with a lightsaber when Luke could do it, or expect Threepio to fly the Kessel Run. They fought for each other – and with each other – loved as sisters, brothers, husbands, wives and uncles, and we all knew who the boss was (and it wasn’t the cocky corellian, the wise old wookiee, the fussy protocol droid and his stubby counterpart or the wanna be farmboy Jedi).

Written by Greg Pak with attractive art by Chris Spouse, Karl Story, Will Sliney and Marc Deering, Age of Rebellion: Princess Leia shows the strength of character and force of will that Leia displayed for decades on the big screen, but presents it as secondary to portraying her out-shooting and out-fighting all other characters. She’s highly trained in these combats skills – given her upbringing and training as a Princess of Alderaan, the life of privilege given to her by Bail and Breha Organa and years on the front lines – but when stories place the focus on these more tactile elements ahead of her diplomatic skills and quickness of mind – the talents which we admire in her so much – she slides further and further away from the Leia we grew up with. We know she can fight – the Death Star chasm blaster fight as Luke prepares the grappling hook, battling stormtroopers on Bespin as Han is stolen away by Boba Fett, throttling Jabba the Hutt with her chain – but highlighting her brawn above her brain does her a disservice, and ‘Princess Scoundrel’ regrettably falls into that trap.

The premise is solid. We’re beyond The Empire Strikes Back, traversing the year to the events of Return of the Jedi and learn that, as in the old EU, Leia has replaced the Ubese bounty hunter Boushh with a plan to enter Jabba’s palace and rescue Han Solo. Understandably, both Leia and Chewbacca are missing Solo (a bittersweet scene, given the recent passing of Peter Mayhew) but are diverted from their flight to Tatooine to the nearby world of Arkanis, on the Corellian Run.

Here we find Lando Calrissian, in big doodoo and for some reason only able to repeatedly offer the phrase ‘It’s not my fault‘ as explanation for his predicament. Chewbacca is uncharacteristically captured with ease by Boskks gang, a plan is made, Leia tests her skills at impersonating Boushh by fooling Boskk while Lando constantly shouts out the name ‘Leia’. And she hits him. A lot.

There are some cool touches, most notably the decision to show close ups of Leia’s eyes as she is figuring her way around the problems, showing her concerns at eye-to-eye level. Mentions of locations like Arkanis (the planet in the same sector as Tatooine and Geonosis after which the sector is named) and Canto Bight are most welcome, and being in this timeframe – between Empire and Jedi – is inherently exciting, but sadly marred by the characterisation of a largely inept Lando Calrissian (wearing what appears to be his generals uniform from Jedi). When Bossk clearly figures out that the Boushh in front of him isn’t the Boushh he knows, you have to wonder why he said nothing when Leia / Boushh entered Jabba’s court with Chewbacca in Jedi.

Again, the art is excellent and the colouring by Tamra Bonvillain is first rate, but the story focuses on the least of Leia’s strengths – already the smartest, scrappiest character of the original trilogy – while dumbing other characters to double-digit IQ levels. And surely a skilled politician like Leia would have cooled down and figured out the impossible mechanics of Lando’s situation on Bespin and not be holding a grudge months later.