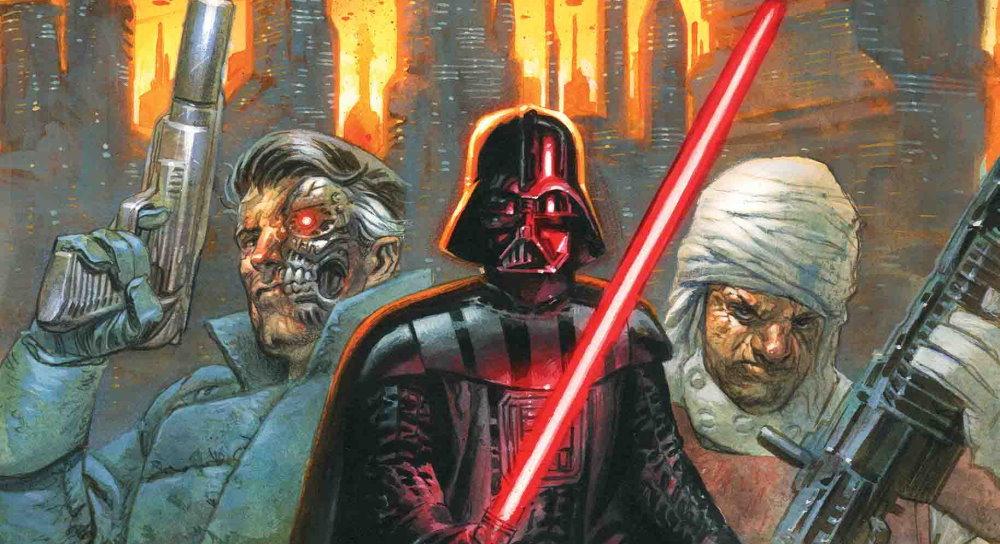 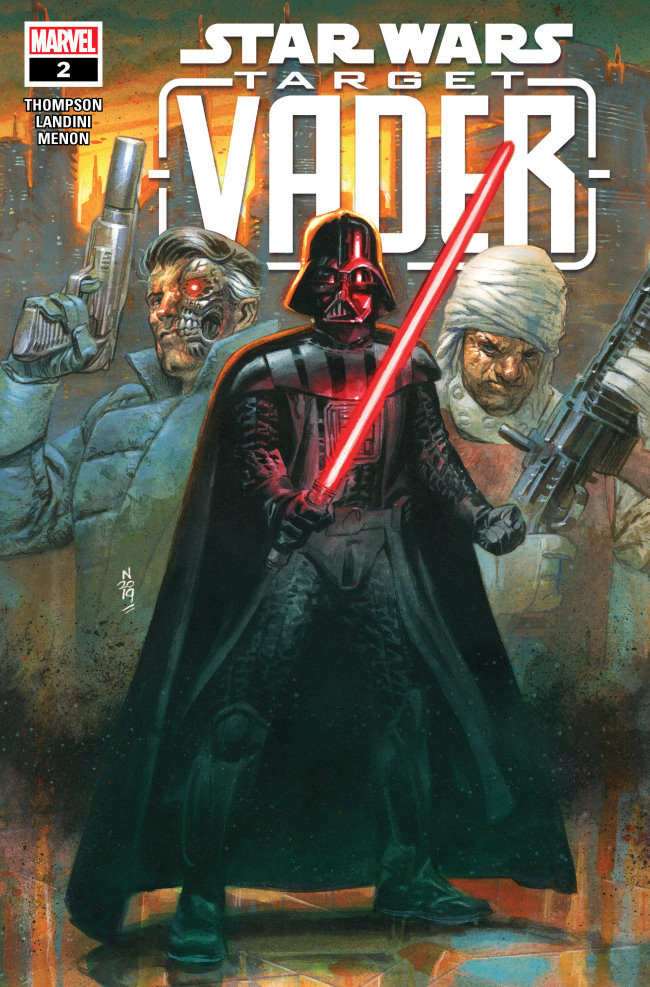 With the power of the dark side of the Force and the might of the Empire, Darth Vader is the most dangerous being in the galaxy. But he is not without his challengers.

The cyborg Beilert Valance, along with fellow with bounty hunters Honnah, Urrr’k, Chio Fain and Dengar, have been contracted by the mysterious organization the Hidden Hand to achieve one goal: Kill Vader.

But Vader’s also on the hunt for the Hidden Hand. And he’s picked up the bounty hunters’ trail….

So often, first issues of new series flatter to deceive, laying out the delicious promise of a most excellent adventure before trailing off into mediocrity. The constant risk of Star Wars adventures is the requirement to fit into a long-running narrative, a situation that some authors struggle with and others prosper. On the evidence of this second issue of Target Vader, Robbie Thompson falls into the second category, bringing a gripping continuation of the first issues story as Valance continues his own long play as Vader closes in.

As with the first issue the script is a winner; snappy, concise, to the point and very much in keeping with the characters, while there are plenty of small moments that satisfy. While the timing of the opening scene seems slightly odd (Valance is clearly a youngster, 9 or 10 years old in the opening scene, so bearing in mind 19 years between Revenge of the Sith and A New Hope and 3 years further on to Empire, that makes Valance at the oldest 32, which seems young for this grizzled character) there are pleasing moments everywhere. An Ardennian meeting a Besalisk (how do they know which hand to shake with?), Vader’s arrival on Arvina, the Imperial troop transporter.

It’s often what’s not shown that holds the most impact. As Vader deals with Fetya in 3 silent panels that show only his ominous shadow, we see him closing in on the Hidden Hand while the end of the issue reveals Valance and Ardennian Chio discussing their plan, to lure in Vader.

We know the end result won’t be the death of Vader, but at this juncture 2 issues in to the 6 part series there’s every chance Valance will cause much difficulty for the dark lord. He’s showing his cunning in these first 2 issues, so opening the pages of issue 3 is a treat I’m already looking forward to.

Again, the script is sharp as a tack, the artwork an absolute delight to roll through and it’s a page turner, which is the best thing anything made of print, paper and heart can hope for.