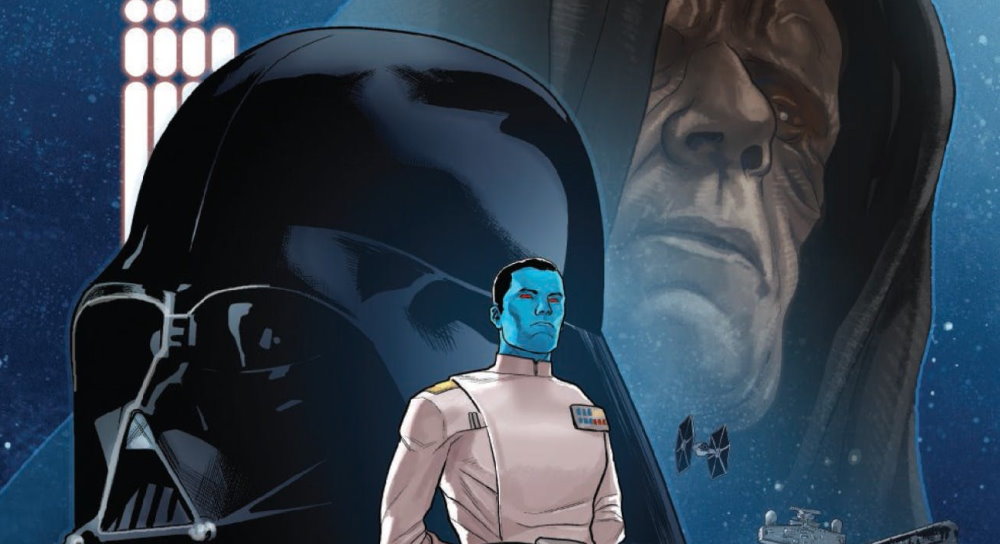 THE RISE OF THE GRAND ADMIRAL REACHES ITS CLIMAX! THRAWN at last meets his greatest enemy face-to-face! Will PRYCE’s final gambit to save her family succeed? And what role will ELI VANTO play in Thrawn’s ultimate plan? 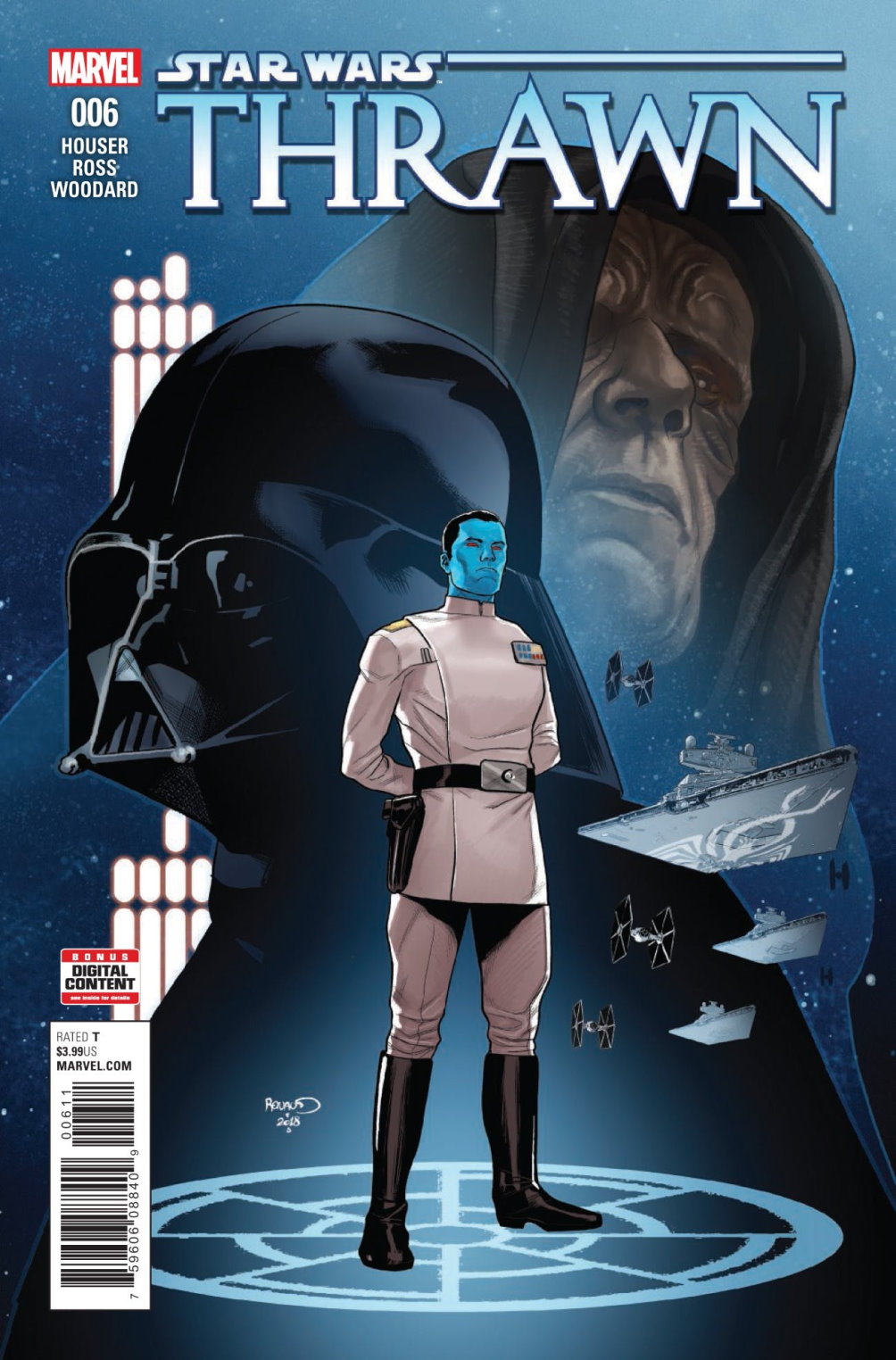 Since the Special Editions came out and I feverishly searched out more expanded universe stories, I have loved Thrawn! New fans to the franchise might find his appeal a bit unaccessible. But, Thrawn’s father, Timothy Zahn, himself explains the character’s appeal from SDCC 2018: He’s a fun character to deal with, because he’s more antagonist than villain, which means the readers can understand him better than perhaps someone like General Grievous. Thrawn has always been smarter than the average imperial officer, and he forces the good guys to bring their A-game to the field. It’s always fun to have the characters out-think each other, rather than just “Who’s got the bigger blaster?” or “Can lightsabers and the Force save the day this time?”

The original Thrawn trilogy back in the early 90s had our rebel heroes run ragged across the galaxy, outfoxed, and three steps behind Thrawn at every turn. The trilogy, consisting of Heir to the Empire, Dark Force Rising, and The Last Command, introduced us to the intricate webs Zahn can weave. Thrawn is always hiding his ulterior motives from our protagonists and Zahn is always hiding a juicy pay off from the reader.

So, Zahn’s glorious return to the character in new canon, with the novel Thrawn, has me giddy. For those unfamiliar with the new Thrawn canon stories, it’s a great time to tune in. Zahn’s first new canon novel, Thrawn is out in hardcover, paperback, and digital. In addition, Zahn’s latest Thrawn adventure featuring Vader and Clone Wars era Anakin, Thrawn: Alliances, came out last Tuesday. You’ve got some reading to do!

Today, I am reviewing another comic adaptation of a Star Wars story from different media. As I said in my Last Jedi #4 comic adaptation review, I don’t feel right judging an adaptation on the underlying source material. I can’t speak to the merit of the Thrawn storyline, characters, and plot, because those adapting the material have no leeway in that regard. All I can speak to is the quality of the adaptation. Accordingly, I’ll try and stow my positive bias towards Zahn and his pet character. In issue #6, we find Admiral Thrawn on Batonn, tasked with breaking up a rebel cell who have taken over an imperial-controlled mine. Thrawn took over command of his fellow imperial officer’s command of the Batonn operation after his umpteenth unconventional strategic victory. As I said above, Thrawn’s ulterior motives are about to be revealed. The entire story follows this pattern. Through a series of unconventional military victories, in spite of political blunders, Thrawn ascends through the military ranks.

Those familiar with the Rebels animated series will recognize Governor Arihnda Pryce. Pryce is on Batonn also. Her ulterior motive? Extricating her miner parents. The upshot appeal of this entire tale is showing Thrawn and Pryce’s parallel ascension through the imperial ranks- Thrawn through the military, Pryce through the government.

As with most adaptations, it seems that Houser’s task here is trimming down an intricate and thick tome. Immediately, an author would be faced with the decision whether to rely on narration or dialogue to keep the comic moving forward. Similarly, what text from the book to display as art in the panels, and what text to put into narration. Personally, I prefer to be shown rather than told. Here, Houser has little to no narration, and lets Ross convey the rest of Zahn’s text in the panels. This is probably the best way to go, but you sacrifice some of the depth from the novel.

However, this is the necessary balancing act that needs to be made when adapting a 448 page novel to 6 20-page comics. Some aspects will fall by the wayside. Here, in issue 6, we lose a lot of the depth of Thrawn’s fleet formation in orbit above Batonn. We also lose some of the subterfuge and motive of Pryce’s operations planet side, as accompanied by Imperial Security Bureau Agent Gudry. 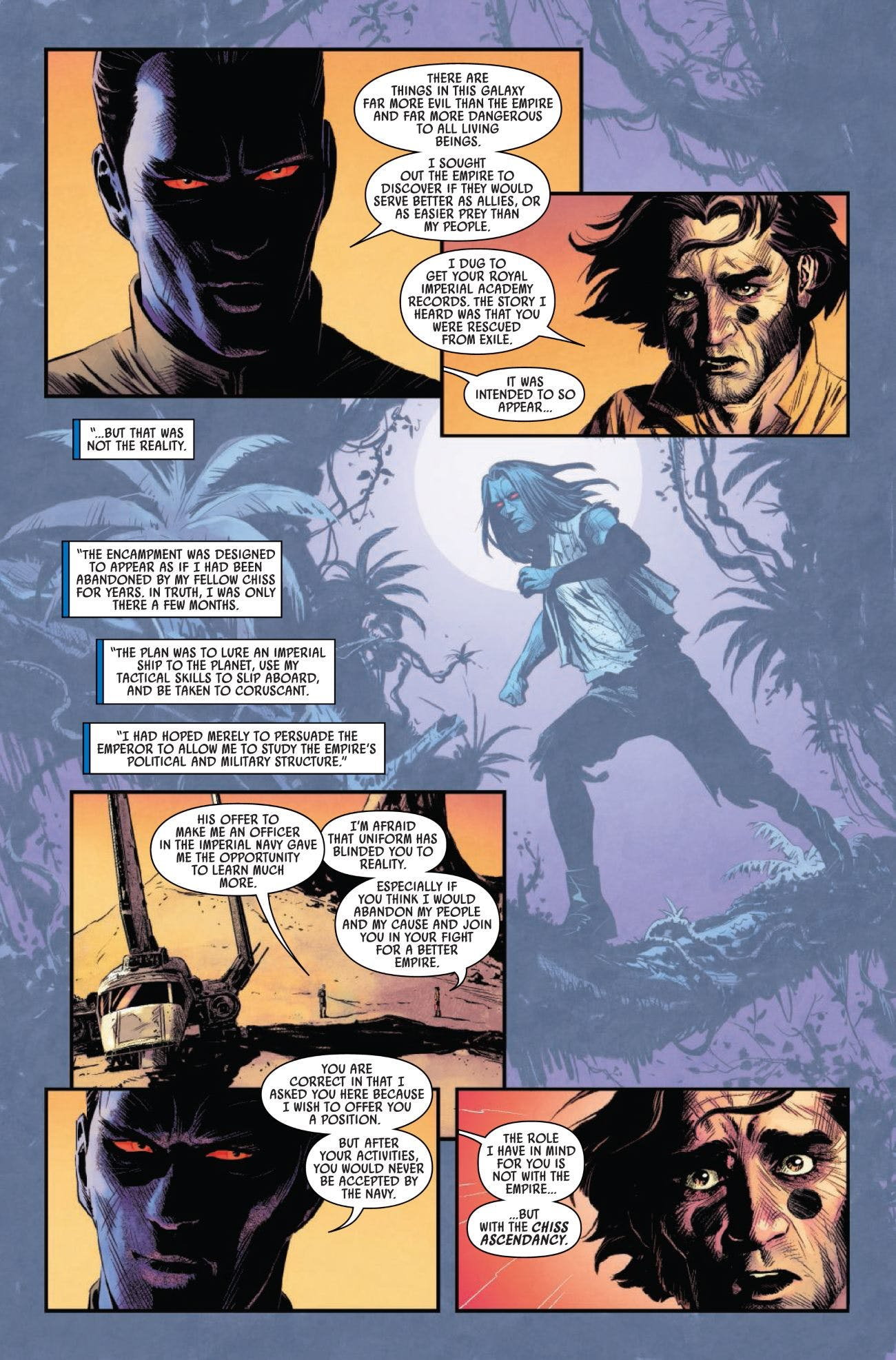 Would I prefer it the other way? Probably not. Pulling too much of Zahn’s text into the comic by way of narration would probably drag down the pace of this comic and turn off those looking for a comic experience. The way I see it, this adaptation supplements the novel and doesn’t stand alone in its telling of Thrawn’s tale. It’s main appeal is depicting the scenes the reader has already visualized while reading Zahn’s novel.

When it comes to that depiction, Ross’ art is strong. Characters are on model for the most part. The notable exception is probably the skinny-faced Vader which more resembles the Rebels depiction over the cinematic depiction. Depending on your feelings about Rebels, you’ll either love it or hate it. Ross has included some nice touches that tie together many of the new canon media entries. You’ll notice the Ysalimiri hanging over Thrawn’s desk in his office and a shadowy panel showing the Season 4 cast of Rebels. Which brings me to my one gripe with the art. Shadows. 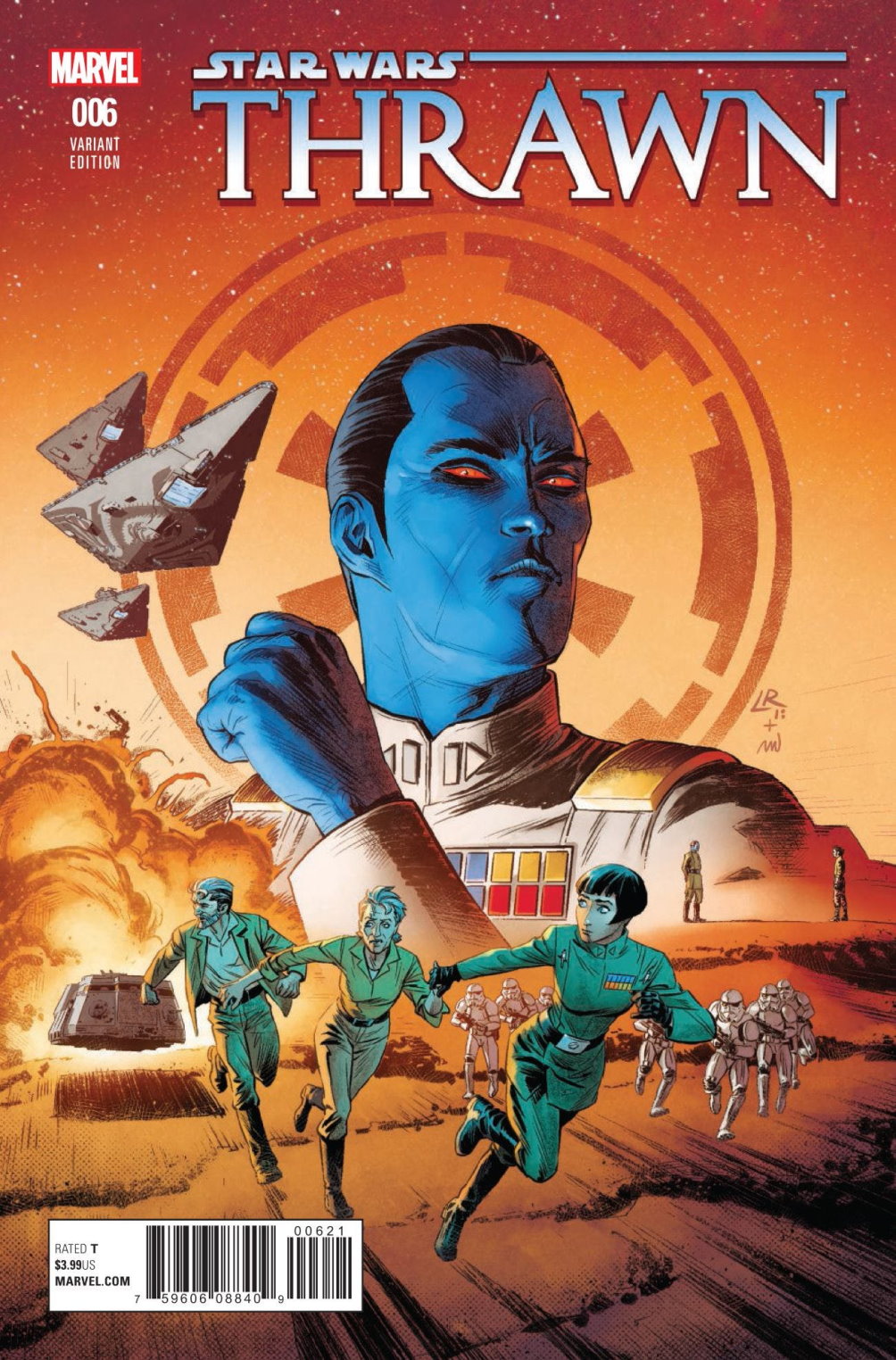 Most of the operation on Batonn is, presumably set during dusk. However, some of the facial and scenic shadows are incredibly heavy. These shadows are filled in with a thick, solid, uniform black ink. I can’t help think that this shadowy problem could have been mitigated by using a grey/blue gradient.

Renaud’s cover is a beautiful, cool blue depiction of the empire’s mighty triumvirate- Palpatine, Vader, and Grand Admiral Thrawn. Palpatine’s shrouded visage looms largest over a brooding Vader framed by the geometric shapes of the Death Star’s walls. Couple that with Thrawn’s custom painted Chimaera and you have a tempting advertisement to crack this issue open.

Ross’ variant cover opts for an orange motif focusing on the action contained within. Given the choice, I’d choose the regular cover. Personally, I like to remember that Thrawn’s brilliance persists in spite of Palpatine and Vader’s constant presence. He can hold his own in league with some of the most powerful Sith the galaxy has seen.

In short, whether you read this comic adaptation before or after the novel, I’d recommend reading the Thrawn novel. The novel and comic adaptation necessarily go hand in hand. They edify each other. Pick up both and pick up Thrawn: Alliances.