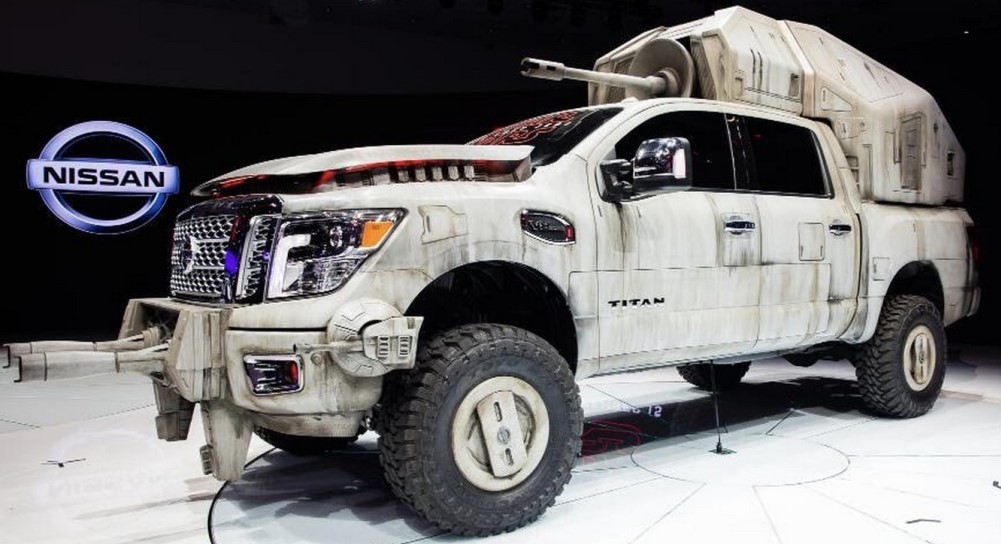 Nissan have unveiled their seventh and final concept vehicle inspired by The Last Jedi at the Los Angeles Auto Show. Truck Trend were invited along for a first look at the 2018 Nissan Titan AT-M6 which was created in collaboration with Lucasfilm, ILM and Vehicle Effects.

The Titan AT-M6 features a massive MegaCaliber cannon affixed to its back and a custom body wrap reminiscent of the film’s massive First Order walker. Wheels receive hydro-dip graphics to mimic a walker’s leg joints, while a six inch lift kit is applied to promote its destructive appearance. Designers insisted on installing a sound system capable of mimicking the walker’s ground-stomping movements, effectively bringing the vehicle to life. An 18-inch bed-mounted subwoofer with a companion surround sound system will produce a planet-thumping 5,000 watts, set to closely capture the reverberation of a First Order walker.

The All Terrain MegaCalibre Six, designed by Kevin Jenkins and revealed on The Star Wars Show, are much bigger than Empire’s AT-AT’s so it makes sense that Nissan chose their largest vehicle, Titan, to showcase the latest larger walker that has been heavily featured in The Last Jedi trailers and posters.

The Nissan display area is a must visit for Star Wars fans attending the LA Auto Show because as well as their seven custom concept cars and six X-wing replicas hanging overhead, there’s lots of other Star Wars fun to keep families entertained.

A requisite stop for any fan of virtual reality is Star Wars: Droid Repair Bay Virtual Reality Experience, created by ILMxLAB. The experience puts users inside a virtual repair bay on General Leia’s ship where they can interact with BB-8 and other brand-new droids created for this story. Anyone who misses this opportunity will have the chance to participate in the VR experience at select participating Nissan dealers across the country.

Visitors to the Nissan show can jump right into the Star Wars universe by simply standing in front of what appears to be a typical mirror. However, upon approaching the display visitors transform into a digital character from Star Wars: The Last Jedi.

As soon as auto show attendees walk through the convention center doors, they’ll be greeted by Nissan and Star Wars excitement. Visitors will be invited into a scene inspired by Star Wars: The Last Jedi and can see the Nissan Maxima and Rogue like they’ve never seen before. Within the display space, Nissan leverages augmented reality technology with “See the Unseen” that will virtually transport the vehicles into another galaxy while exhibiting Nissan Intelligent Mobility features.

R2-D2 and First Order Stormtroopers will greet fans during the following times:

If you missed our previous Nissan The Last Jedi articles click the LA Auto Show tag below and make sure to follow us, like our social media and stay tuned for more coverage as I’ll be over at the LA Auto Show soon.