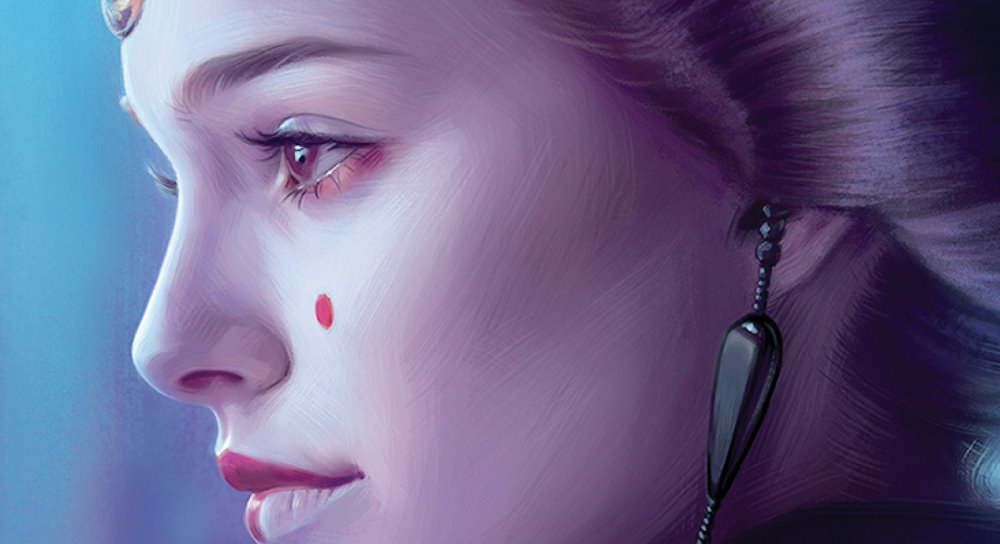 Star Wars: Queen’s Peril arrives on 2nd June via Disney Lucasfilm Press from E.K. Johnston, looking into the life of Padmé Amidala in a prequel story to Queen’s Shadow that shows Padmé as she transitions from the Queen of Naboo to her new role as Republic Senator.

In hindsight, perhaps she should not have met Tsabin for the first time as the Queen. It had made perfect sense at the time. Padmé had several meetings in the morning with various officials and palace employees, and when Panaka announced it was time for the final meeting of the afternoon, Padmé hadn’t slipped out of her role.

So Tsabin had met her as a cool and distant monarch, and not as someone who was going to get to know her like a second skin.

To her credit, Padmé realized the error almost as soon as Panaka was finished introducing the girls to each other.

“Thank you, Captain,” Amidala said. “That will be all for now.” 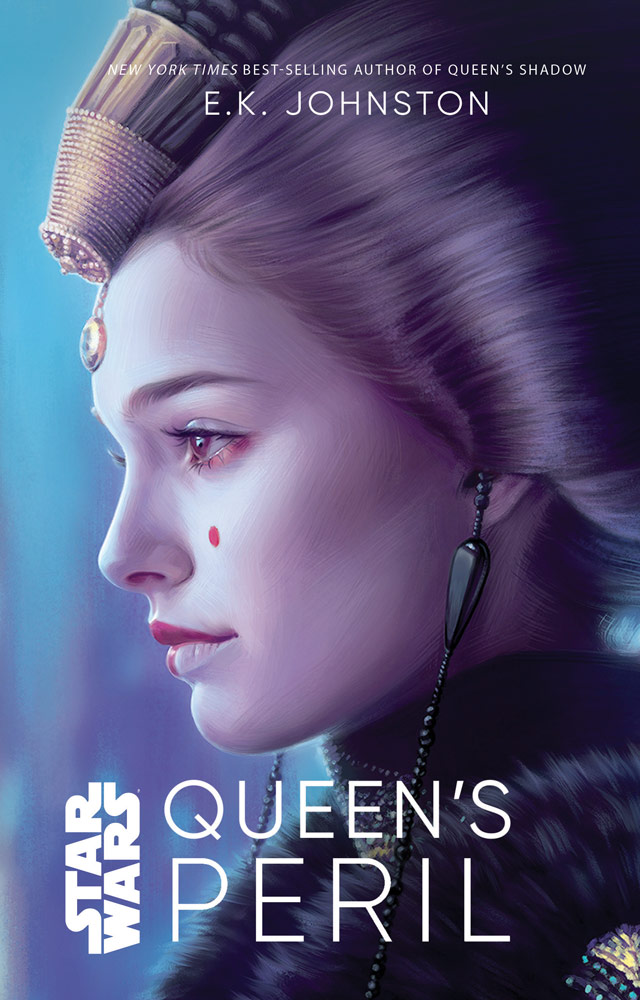 Panaka was surprised to be dismissed; he wouldn’t be on duty again until the next day, but he’d swallowed any protests he might have made and left them to it. Then the two of them were staring at each other in an awkward silence. Padmé’s eyes flicked to the guards, who were pretending not to be there. She didn’t have a complete read on them yet, so she wasn’t sure how far their discretion would go. They never accompanied her into the room where she slept, though. And there were two chairs in there, she remembered.

“Walk with me?” she said, getting to her feet and holding out an arm.

Tsabin nodded and fell into step beside her. Padmé led the way into the bedroom and shut the door behind them.

“This is more complicated than I was imagining,” she said. “Please, sit down.”

Tsabin did as she was told. So far, as a matter of fact, she had been entirely biddable, and her face hadn’t shown any emotion. Padmé could completely understand that.

“Royal handmaidens are traditionally attached to a queen to serve in her private household,” Padmé said as a place to start. “I don’t know if Captain Panaka has told you the same things that he’s told me, but that is not exactly what I’m looking for.”

“No monarch has had a bodyguard like that since the last dispute with the Gungans, and that was generations ago,” Padmé said. “And I am still not entirely sure that there is a reason to return to the practice.”

“My impression of Captain Panaka is that he is more of a ‘no reason not to’ sort of thinker,” Tsabin said.

She was still sitting stiffly in the chair. Padmé slouched in her own seat, and watched with some satisfaction as Tsabin’s shoulders relaxed.

“I agree,” Padmé said. “I don’t think there’s any harm in following his advice.”

“Or,” Tsabin suggested, a hint of mischief in her voice for the first time, “letting him think that most of his advice is being followed.” 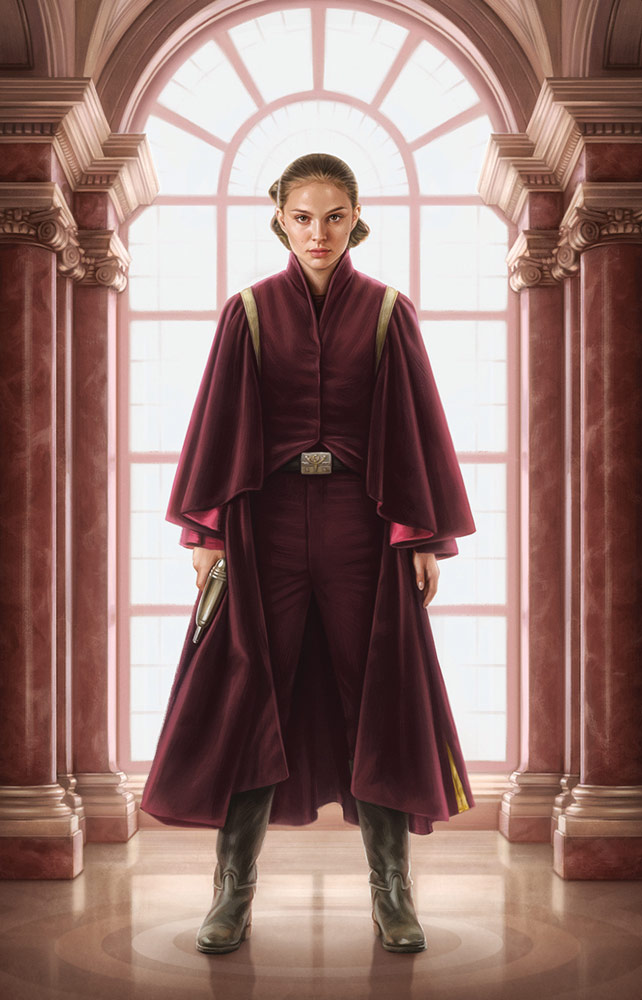 Padmé didn’t try to stop the smile that spread across her face. She was not a deceptive person by nature, but she did understand the value of keeping her cards close.

“My name is Padmé,” she said. It was the greatest show of trust she could think of. And it was enough.

“I’m pleased to meet you,” Tsabin said, finally looking at her with an unguarded expression.

Padmé leaned farther back into her chair. She kicked off her slippers and crossed her feet in front of her, her knees leaning on the armrests.

“I’ve already changed the captain’s plan a little bit,” she said. “He thought one bodyguard would be enough, but I have convinced him that a group is a better idea.”

“Because it’s easier to hide,” Tsabin mused. “Do you know who?”

“Not yet,” Padmé said. “We only talked about it yesterday. But he found you, and I assume he had other people in mind when he decided that you were the one to bring in.”

“We should be loyal to you, not to him,” Tsabin said quickly. “They have me staying in the barracks with the other guards, and I don’t think that’s a good idea.”

“He recruited me because I am good at providing support. It’s what I’ve always done for any group I’ve ever played with. But I don’t think that’s all I have to offer,” Tsabin said. When Padmé said nothing, she continued, “Hallikset players spend years on breath control, even though it’s a stringed instrument. It’s part of the discipline, but also helps maintain the purity of the sound. I can breathe without anyone noticing, and that means I can control my face and my reactions.”

“I wondered how you did it,” Padmé said. “You’re very good.”

“I can teach you,” Tsabin said immediately. This was going to be more fun than Padmé had thought. “It’s possible that we’ll have different gut reactions to things, but if we both learn the same way of concealing those reactions, no one will be able to tell.”

They talked for a while longer about themselves, getting to know each other. A droid brought dinner, and the sun went down, and neither girl particularly cared. Tsabin was quick to understand Padmé’s ideas, and quicker still to provide suggestions to improve them. The plan was by no means perfect, but it was a good start.

“That’s probably as much as we can do before the others get here,” Padmé said. “It wouldn’t make any sense to set up the whole stage before we have all the players on it.”

“I can show you the breathing exercises, at least,” Tsabin said.

“Let me call a droid first,” Padmé said, making the decision for them both. “You’re not staying in the barracks.”

Star Wars Queen's Peril
$14.37
Buy on Amazon This is a paid link. Learn More. Clicking the link may take you to the Amazon store servicing your country Price incl. tax, excl. shipping.  Details correct as at: 2021-07-31

Padme returns in 2020 in Queen’s Peril