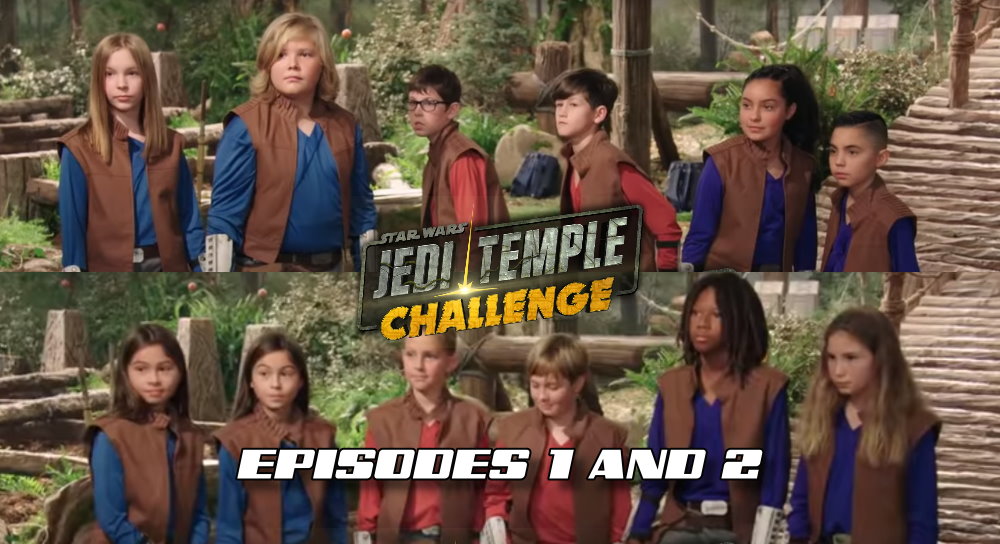 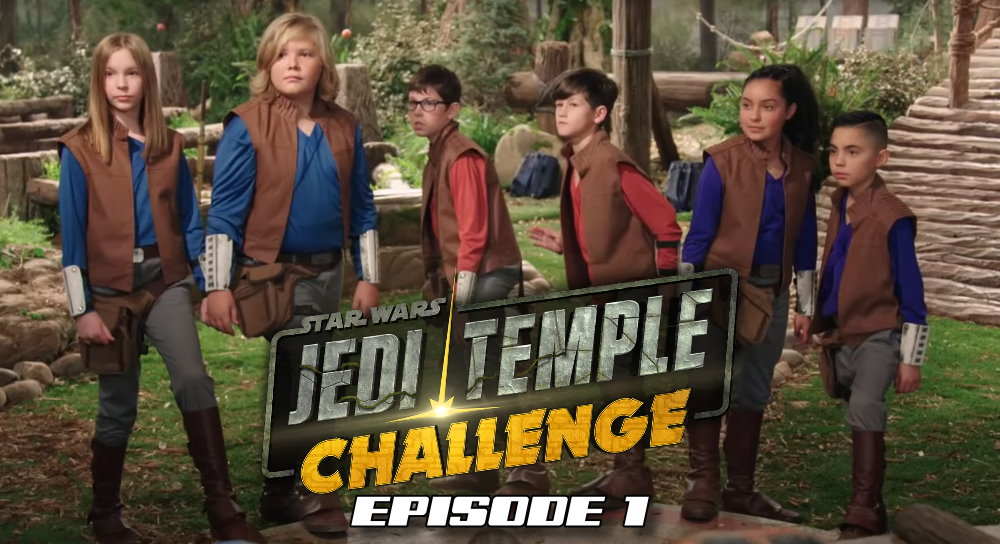 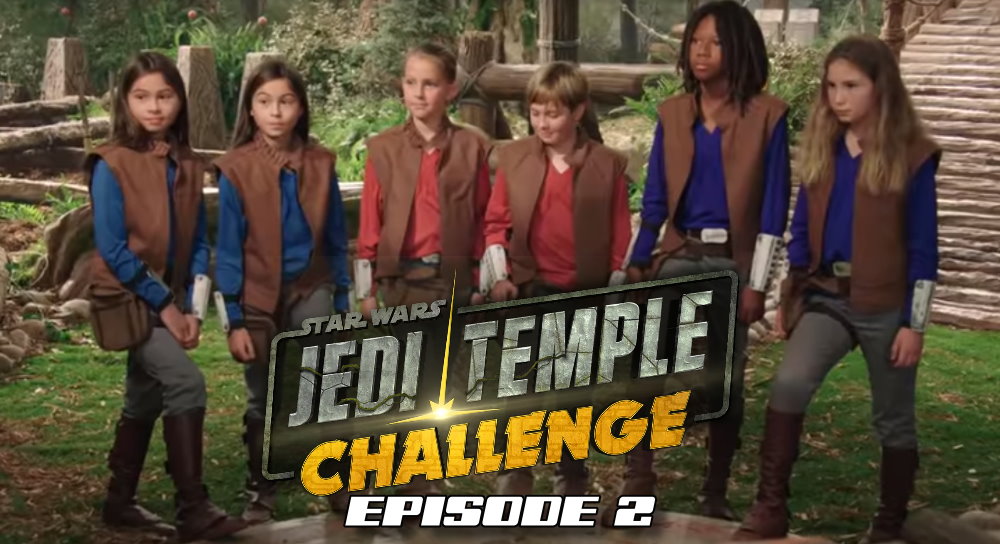 The first episode of the Star Wars: Jedi Temple Challenge children’s game show premiered on the Star Wars: Kids website and YouTube Channel on June 10, 2020. With two episodes under its belt and the third episode to premiere on June 17, 2020, this ten episode series has already proven to be fun and exciting.

The show is hosted by Ahmed Best, the actor who brilliantly performed Jar-Jar Binks in the Prequel Trilogy, as Jedi Master Kelleran Beq. According to Best, Beq is the relative of Ahck-Med Beq, a bar patron that had appeared in Attack of the Clones. Bringing the current total of Star Wars characters Ahmed has portrayed to three.

Master Beq guides and judges the performance of three teams, consisting of two Padawans, as they face three trials to attain the rank of Jedi Knight. To complete this task, they must demonstrate they possess the attributes of a Jedi Knight: Strength, Knowledge, and Bravery, Master Beq is assisted in proctoring the trials by a wise-cracking protocol droid, AD-3 and the rather laconic astromech droid, LX-R5.

The first trial challenges the team’s physical strength on an unnamed forest planet. “The Strength Trials” require the padawans to negotiate four unique obstacles to obtain the parts they need to construct their own lightsabers. The first team to collect all four parts and complete the assembly wins the trial. Leaving the remaining teams to battle for second place and move on to the second trial. 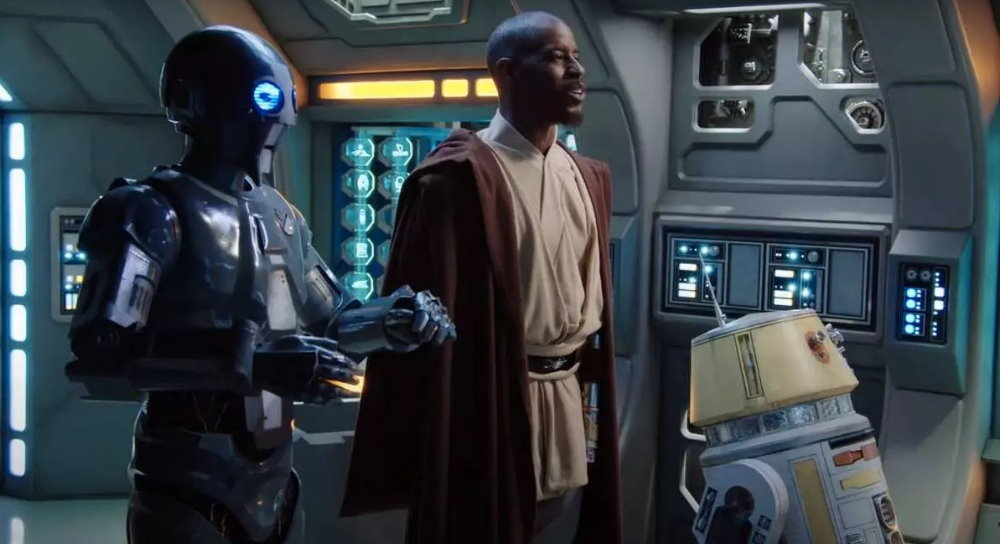 For the second trial, the remaining two teams embark on the Jedi Starship, Athylia, where their knowledge will be put to the test.. In this event, the Padawan’s must memorize the details of a tale written by Cavan Scott and told to them by AD-3. After hearing the story, the teams must correctly answer five questions regarding the story oband obtain a piece of data for their holocrons and move on to what awaits at the Jedi Temple. The team that correctly answers the most questions moves on to the final trial. However, this isn’t a typical click-button game, Instead, a unique quiz style allows the team members to discuss their reply before answering. Each team member is required to assign themselves the role of “Pilot” or “Engineer” and work remotely but negotiate the answer through a comlink before responding to the question. To respond to a question posed to the “Engineer”, the player must search and locate the object described in the answer. The “Pilot” who answers first to their respective question is determined by the pressing of a button on the starship’s control console. The team to correctly answer the five questions and obtain their holocron is permitted to travel to the secret location of the Jedi Temple and face the final challenge.

Upon arrival, the remaining Padawans are briefed by Master Beq on their third and final trial. The timed event requires the team to overcome three challenges designed to test their bravery., avoid the temptation of the Dark Side, and obtain the kyber crystals to power their lightsabers. The disembodied presence of the Dark Side, voiced by Sam Witwer, nefariously offers cheats and shortcuts to the players so they may circumvent the challenges but stray from the path of the Jedi. The Dark Side applies the clock to pressure the players into its clutches of deceit. The team that conquers the challenges and dismisses the temptations of the Dark Side, are awarded the title of “Jedi Knight” The Padawans are then formally knighted by Master Beq with their completing the construction of their lightsabers, bequeathed the robes of a Jedi by AD-3, and congratulated by the disembodied voice of Yoda, voiced by Frank Oz. 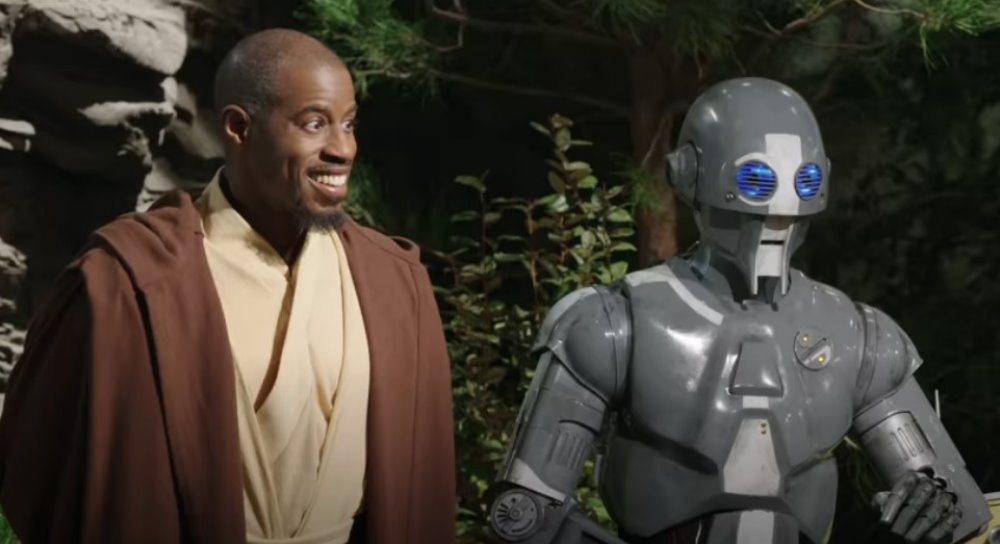 In addition to a superb cast, the show’s development, design, and production is beyond exceptional. The details in set design are on par with the high standards of Star Wars films which result in believable and intriguing settings. The entire show is the product of a highly creative team with a passion for Star Wars and it’s off to a great start. To round it all out the show features contestants that are overflowing with that same passion.

The dynamics of the trials are perfectly attuned to the developing minds of Padawans. My resident 10-year old Padawan was intrigued immediately after viewing the first episode. He immediately began postulating strategies on how he and a friend would meet and conquer the challenges of the Jedi Temple. It’s only a matter of time until I find replicas of the “Leap & Lift” and “Saber Stability” obstacles constructed in my backyard.

“Jedi Temple Challenge” is a fast paced and fun game show perfectly geared toward Padawans ages 10-14 but is just as appealing to any age. The challenges of the game are entertaining and intellectually stimulating. Each is designed to allow the player and viewer to learn and experience important qualities of character such good sportsmanship, integrity, confidence, teamwork and friendship. All of which are of utmost importance as we endure the state of world affairs. However, experiencing and accepting defeat are also realized through the results and players are permitted to reflect on the outcomes to learn the value of adapting and perseverance and are awarded the advice of Masters Yoda and Beq. All in all, the show is a pleasure to enjoy and share with your favorite Padawans.

Star Wars Dark Legends (Star Wars (Disney))
$12.24
Buy on Amazon This is a paid link. Learn More. Clicking the link may take you to the Amazon store servicing your country Price incl. tax, excl. shipping.  Details correct as at: 2021-08-01