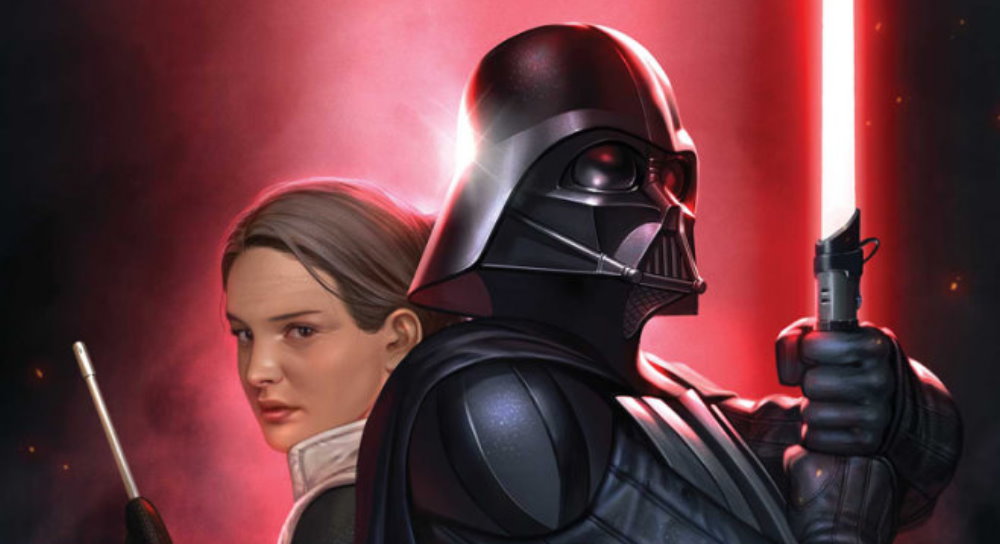 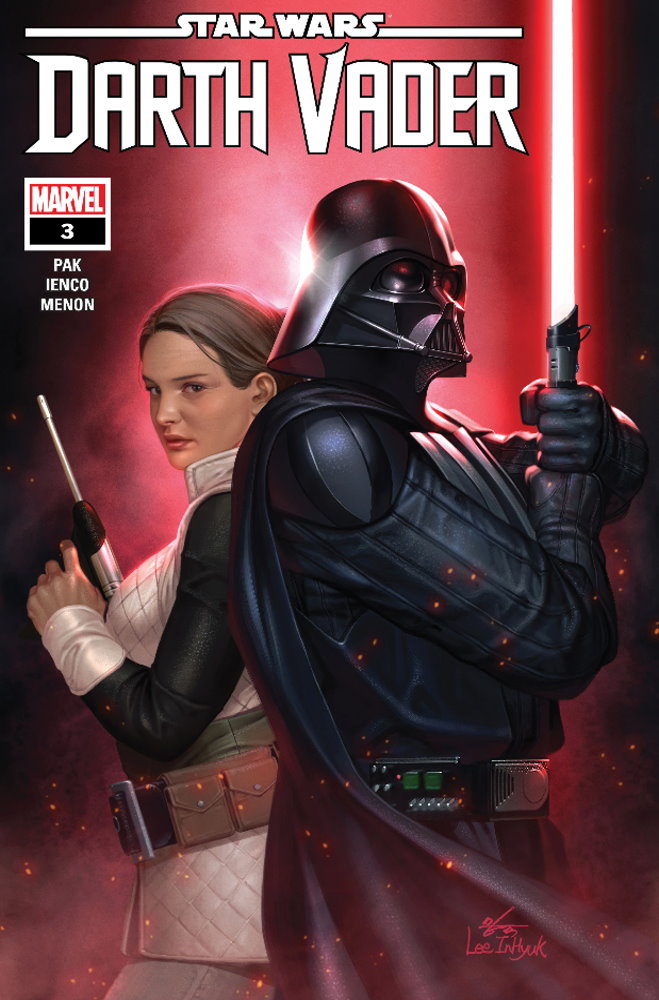 DARK HEART OF THE SITH
Part III
Darth Vader revealed the truth: He is Luke Skywalker’s father. But Luke refused Vader’s call to the dark side of the Force and escaped.

Enraged, Vader has taken a squad of death troopers and the Imperial forensics droid, ZED-6-7, on a quest of revenge against everyone who hid Luke from him. Vader’s bloody journey has revealed an unlikely ally – Sabe, Queen Padme Amidala’s former handmaiden.

Sabe has sworn to avenge her fallen queen. Now, Vader’s quest into his son’s past becomes a hunt for the truth of Padme’s death. A hunt that compels Vader to return to Naboo….

Pak immediately takes us to Vader on Naboo giving us once more the trademark flashbacks to the Prequel movies, and paralleling it to his story. Vader and Sabe head to the Namberrie lakeside retreat, where they encounter Captain Typho, and another Naboo soldier, Tonra. After an initial confusion and conflict, they realise that they are all on the same side. They travel underwater to locate the security tapes together, taking refuge in a Gungan pod after being attacked by a Colo Claw fish.

As it turns out this is their final destination, and location of the tapes – which was just a strange plot move. Also in the pod is a mosaic of the Alliance between the Jedi, Naboo, and Gungans – including an image of a young Anakin.  Vader destroys the mosaic in anger.  Vader’s droid plays the security tape footage, and instead of showing what happened to Padme, it is a video of Sabe, Typho, Tonra and others pledging to be “Amidalans” and to kill the person who killed their Queen. They reveal that they know Mustafar is Vader’s domain, and know that Padme was heading to that planet. They know Vader killed her.  The Amidalan’s seek to now kill Vader, as the Colo Craw fish returns and is ready to attack them all.

It’s a clever redirect from Pak to switch up the alliance between Vader and Sabe so abruptly and put them in immediate conflict, linking into the death of Padme, and who knew what and what they have learnt since. Not quite knowing the whole truth, but knowing enough. It’s an interesting balance that Pak plays and he executes it well.

At one point I felt Pak was walking the line of being too cute in his cues to the past, and use of locations, vehicles and monsters from the Prequels. It is a very narrow line, it won’t work for every reader but I was happy with how Pak wrote it, and feel it worked. At this point in the new series, Vader needed an enemy and not just a goal – so introducing the Amadalin’s was a great move at a point it was really needed. There is a threat however that they are going to be ‘ended’ as quickly as they were introduced judging by the issue end. I hope not, as Vader’s opponent being people from his past, shining a light on the sins of his past is an interesting new approach.

In prior reviews I have spoken about how Ienco’s art is a wonderful study of the Prequel trilogy, and this issue really lets him explore that fully. We get the trademark flashbacks, so beautifully rendered, but also the chance to showcase monsters and vehicles from the films in the current timeline. We see the return of Captain Typho, wonderfully sketched, and faux Padme is less faux Padme in this issue, and looks and feels like Sabe. Which whilst perhaps an odd move, actually worked.

Ienco also got to showcase the beautiful country nature of Naboo, something not often seen in Star Wars as well as glimpses of the classic Naboo architecture. It was fun to see this re-explored and I wish we had the opportunity to see more of this.

There is a surreal element to seeing prequel locations, used in the modern era but Ienco got the balance right in harking to the past, whilst giving it a new and fresh take.

Once again, I loved Neeraj Menon’s colour work. It was superb. From the first full page panel of Vader on Naboo.  The lush greens, and sparkling colours of the fauna and wildlife offset against the rich black of Vader was wonderful to see. The trademark red wash to flashbacks continued, and the colours introduced to the water environments worked very well.

This series is really flourishing from rich artwork, and the balancing of panel sizes to showcase this has been perfectly woven into the story so that the art can be celebrated without slowing the story down.

Last issue i was critical of InHyuk Lee’s cover for showing faux Padme as too young and fresh faced. I had no such complaints here. Sabe was shown with slightly greying hair, a little crease to the eye, a few ageing wrinkles to the forehead. Perhaps a little too much, but I was glad to see the correction to the age of hero character. I loved his choice to balance our hero versus our villain, and I really enjoyed his very samurai inspired take on Vader.

Overall, issue three was a marked improvement on issue two. It walked a fine line at times of being a little “too much” in the way it harked back to the prequels. I could have lived without the Colo Craw fish for example, but overall Pak worked the tale very well. The art continues to be the joy of the series, and a worth the price alone.