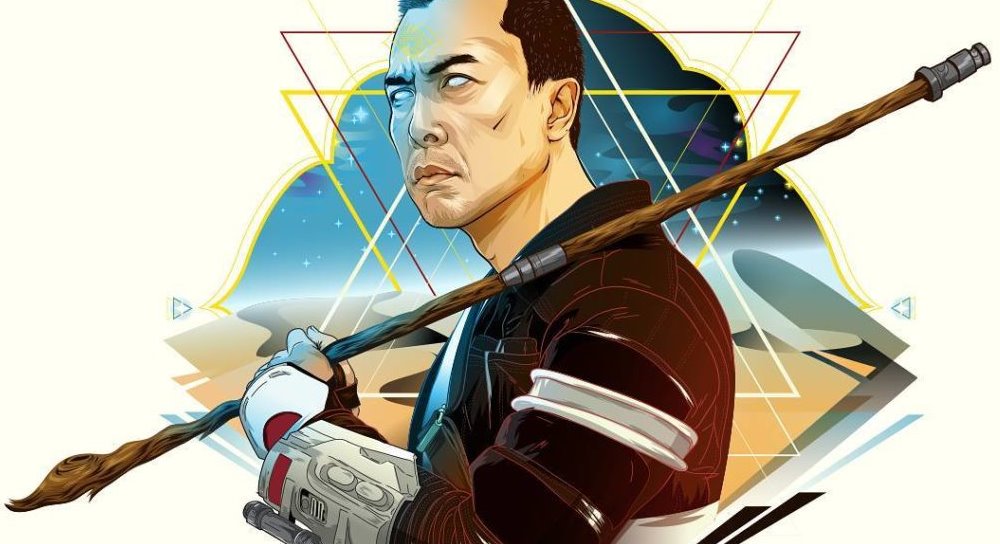 Vogue magazine editor-in-chief Anna Wintour once advised, “Create your own style… let it be unique for yourself and yet identifiable for others.” While this quote was surely in reference to fashion, artists of all categories can benefit from following her advice. After all, perfecting an art is one thing. Doing so in a distinct and recognizable manner is what sets you apart from the crowd. 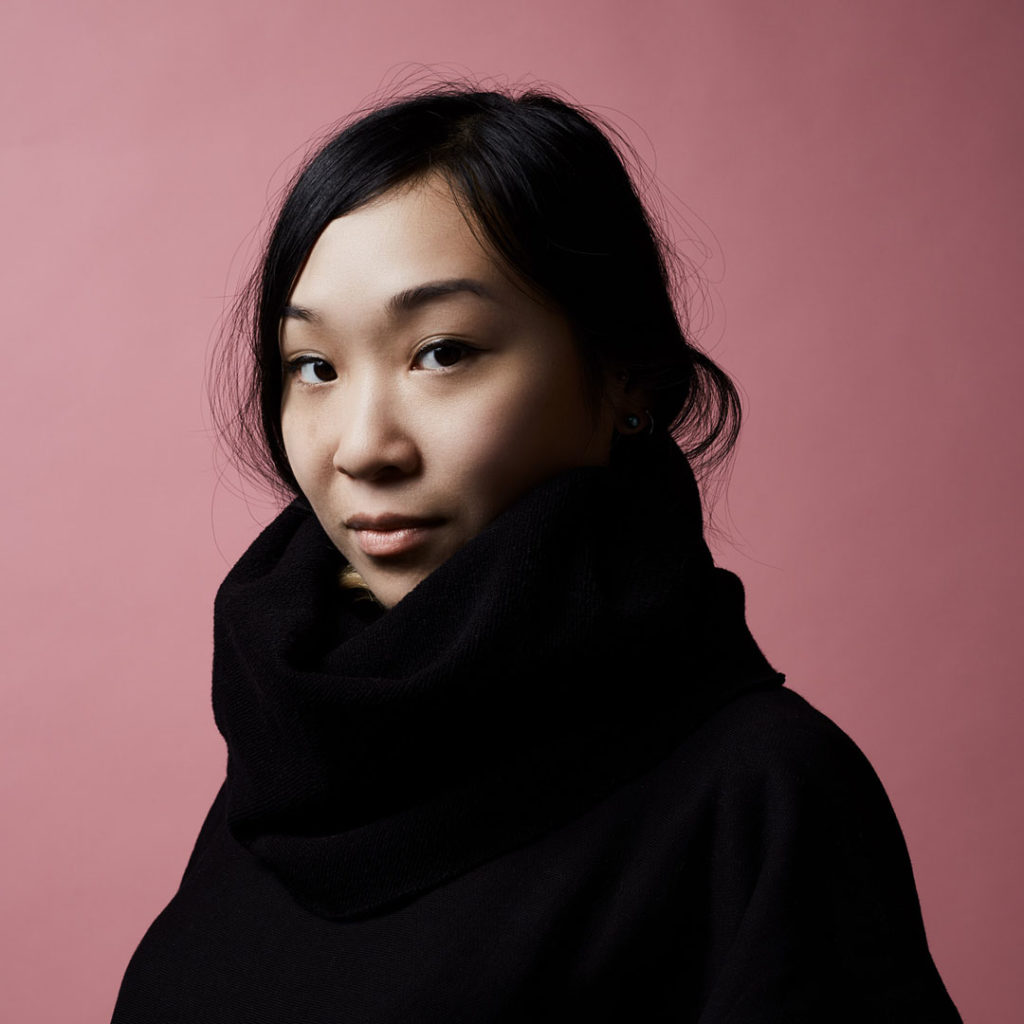 Cryssy Cheung is an artist who has categorically accomplished both. Having started working with digital media shortly after the turn of the century, she is a pioneer of vector art in every way that matters. One quick glance at Cryssy’s work and it’s clear why her art is both respected by her fellow artists and instantly recognizable by all.

While Cryssy is certainly well known in Star Wars circles, her talents have reached well beyond a galaxy far, far away. Her vast portfolio includes work from Ready Player One, Blade Runner, The X-Files, Star Trek, and Terminator 2, just to name a few. In addition to her unmistakable style, Cryssy has also created exceptional art mashups such as this Batman piece done in the style of ancient Chinese paintings. Skill and creativity of this caliber is certainly impossible to go unnoticed, so the fact that her client list includes a slew of Fortune 500 companies comes to no surprise. Nor that one time she entered a design contest and won. We could go on.

On the other hand, anyone who is even remotely familiar with Cryssy will already know that none of her achievements have gone to her head, and is as friendly, humble, and down to earth as they come. For those learning about Cryssy for the first time, her fun and easy-going personality shines through in her interview below. Enjoy!

FT: What are three interesting facts about you that most fans may not know? 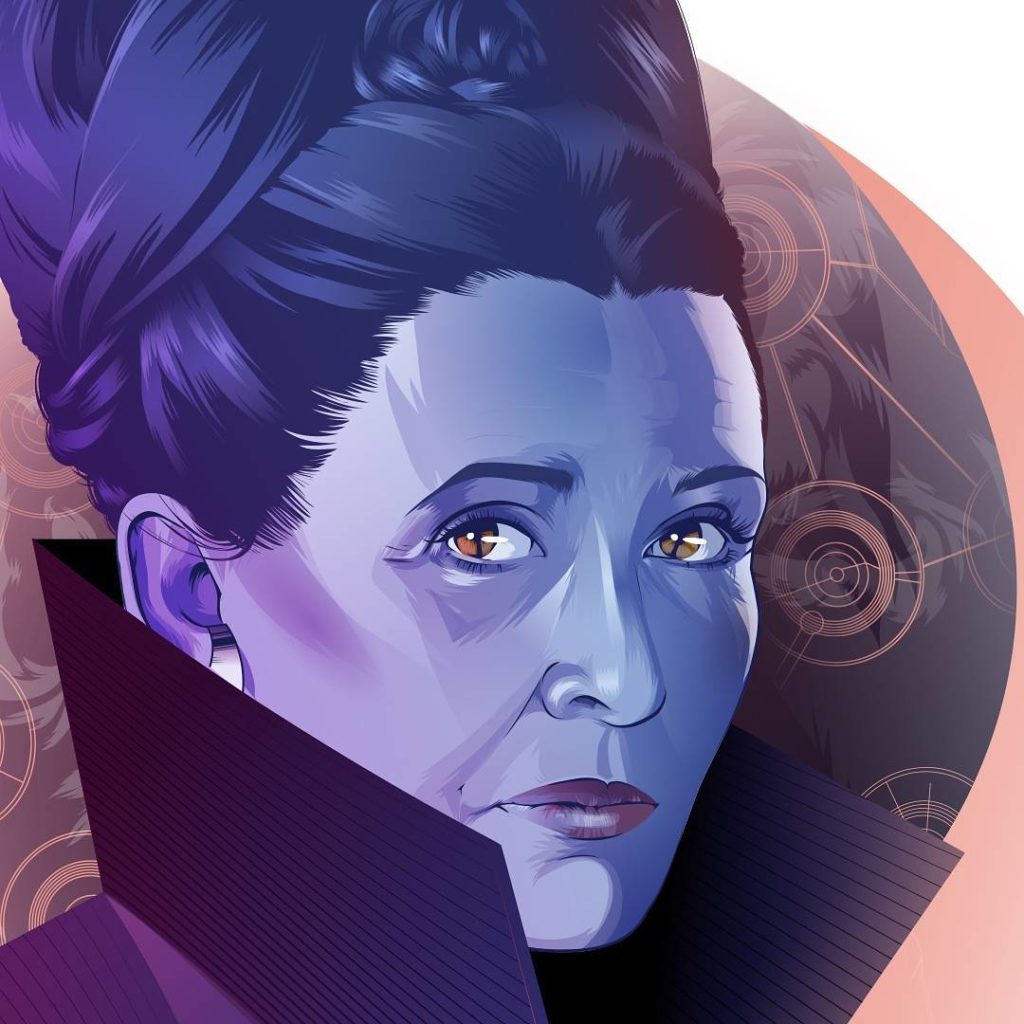 CC: Oooh, let’s see… I train Muay Thai. I’ve been training for about two years now. I’m still not great at it, but I find it fun. Beats going to the gym!

I’m classically trained in violin. I played in youth orchestras but stopped when I was 16, as I moved and the school I went to didn’t have an orchestra. Now I just play for fun, and I’ve actually been jamming together with a friend who plays guitar and we’ve been playing Chrono Trigger songs!

I’m also a designer and work in commercials/broadcast.

FT: What are your earliest Star Wars memories?

CC: I was an adult the first time I saw any Star Wars films. I watched it on a small TV on VHS, haha. I think I was like, 23. FT: What was the defining moment that made you realize you wanted to be a professional artist?

CC: For me, it wasn’t any one thing. I’ve been doing art all my life, and always knew that I wanted to do some sort of art as a profession. In my younger days, I wasn’t exactly sure what it would be, but here we are!

FT: What artists and/or artwork have been the most inspiring to you?

CC: I look to many different types of artists for inspiration. Art means something different for everyone, so I think it’s important to expand your influences and draw them from everywhere. Every person has a different perspective of the world, and I’m always curious to see things through their eyes. Artist-wise, some of my biggest influences are Chiara Milk Bautista, Alphonse Mucha, and Hydro74, who is also a friend!

Aside from looking at other artists, I also look to photography, landscapes, the colors of mother nature, etc. 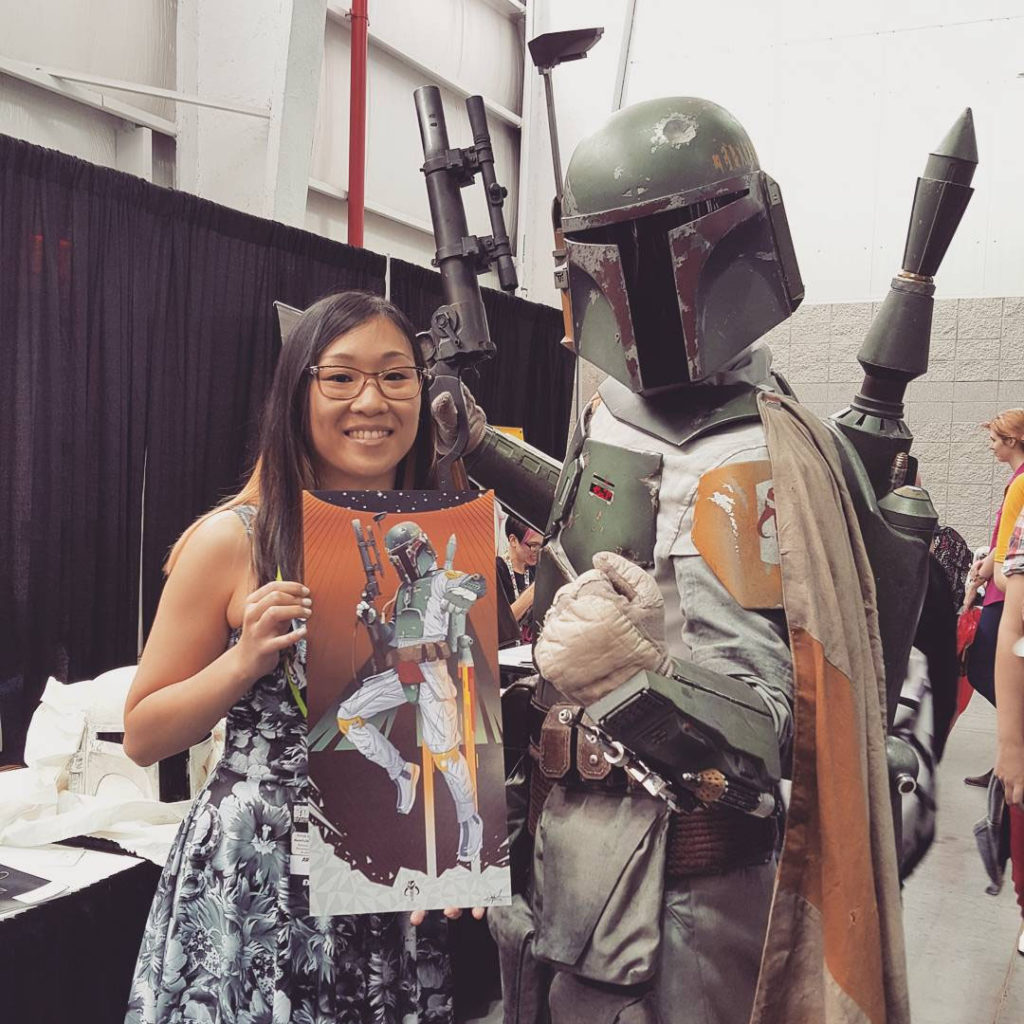 FT: How would you describe your style as an artist, and how did you develop it?

CC: My most prominent style is vector art, done in Adobe Illustrator. I first learned how to use Photoshop and Illustrator on version 8.0. I had been studying art my whole life, and working within the digital medium for about half. To develop the style, I’ve honestly just been messing around within Illustrator for a long time, haha. Trying new things, and if something looks good, I’ll keep going in that route.

CC: Ooh, couple faves! Number one is R2-D2. I just love everything about R2! He’s a droid with a big personality for sure. Is he my fav to draw? Nope! Haha. As an artist who mostly draws portraits, I don’t really like drawing droids and things. I like drawing organic things, and less of machinery and man-made type of stuff.

My second fav is Ahsoka Tano. She’s just badass. I’m not done watching Clone Wars yet (ahh!) but I love her storyline and character development. She’s totally fun to draw!

FT: What are the most enjoyable and most challenging aspects of being a licensed Star Wars artist?

CC: It’s totally enjoyable to be able to work with such a well known intellectual property as Star Wars, and to be trusted to create something within their scope. The only challenging things is, and is with any client really, learning what the client’s likes and dislikes are and how they would like their IP to be handled. For example, I have a set of portraits of the Episode VII characters I drew and they were really not into the blue skin thing, haha. Wasn’t a big deal to switch the colors around, but it was something they weren’t into, as they have alien characters with different skin colors. So I totally get it. 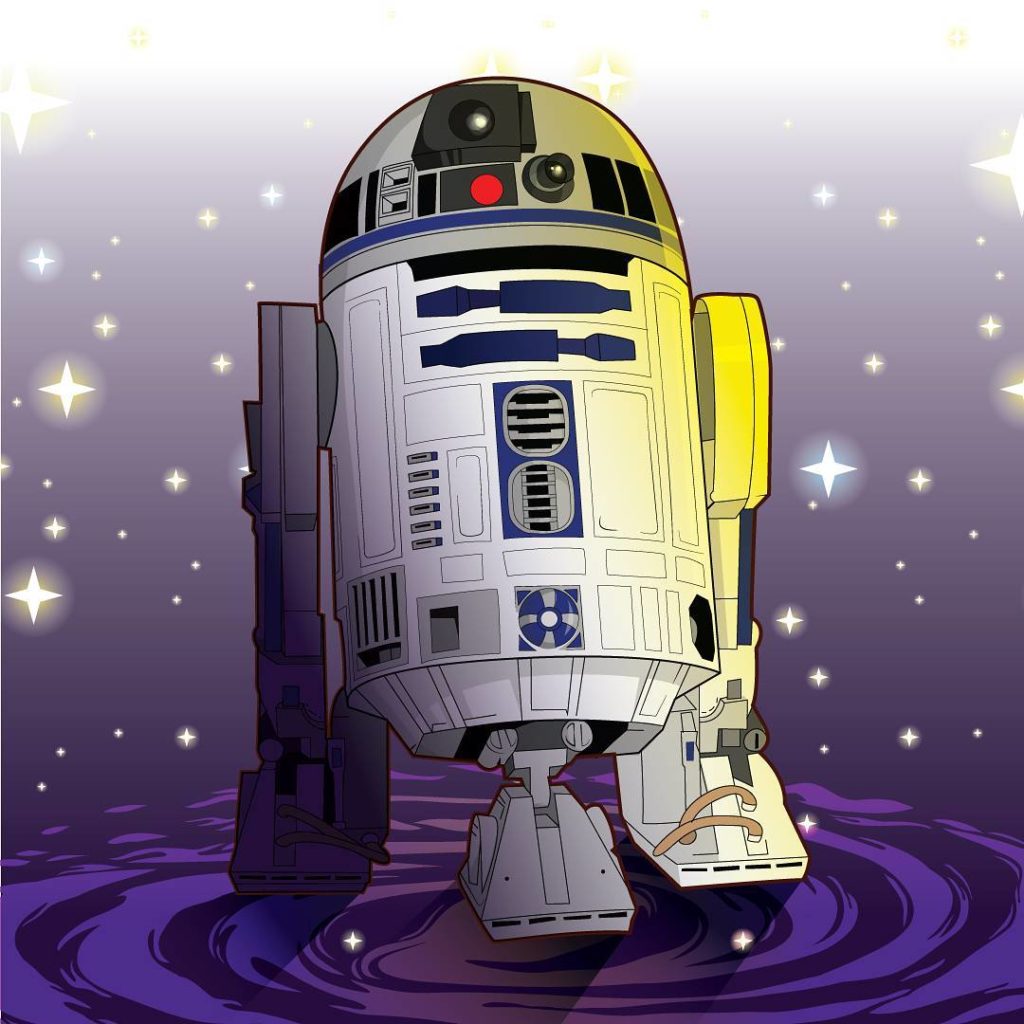 FT: What is your proudest moment as an artist?

CC: I feel that anytime I get recognition for what I do is a proud moment! Many thanks for all the support I get out there. It really means a lot!

FT: What was the best piece of advice you’ve been given that you’d like to share with aspiring artists?

CC: Hmmm. Increment your saves? Hahaha, just kidding. I mean that’s important to do, but maybe this is better: don’t pigeonhole yourself. Keep exploring and experimenting. Art is one of those things that is always evolving; don’t be afraid to have some fun with it.

FT: Last but not least, what is your dream goal as an artist that you haven’t already achieved?

CC: I would love to be able to live off of my own art!

Cryssy Cheung is a New York-based art director, designer, and award winning illustrator. She is deeply influenced by such artists as Chiara “Milk” Bautista, Kim Jung Gi, and the posters of Alphonse Mucha.

Cryssy came of age during the early days of digital art and quickly developed a passion for Illustrator and Photoshop. She followed her bliss to the School of Visual Arts in New York City, where she refined her skills creating vivid dreamscapes populated by evocative characters with curious motives. While envisioning these ethereal worlds is her passion, Cryssy is a licensed artist for Star Wars and a multidisciplinary illustrator, most known for comic book covers, editorial illustration, and design for motion. Some clients include Eater, Moleskine, Adobe, CBS, Valiant, IDW Publishing, EasyJet, and DC Comics/Vertigo.