Welcome to the seventh in a series of recollections from Fantha Tracks regular contributor Paul Naylor. In this memoir, Paul recounts the trials and tribulations of collecting autographs of our favourite heroes and villains.

So, I was in the fortunate position of holding a media pass at Celebration Europe 2016, taking place at London’s ExCel. Reporting back for regional press in the UK’s West Midlands had got me access to the Rebels Press Conference – for which I needed a wrist band.

Not long after the photograph was taken of me doing my worst Fonz from Happy Days impersonation, flanked by all manner of cosplayers, I made my way along the outside of the convention centre building.

Having walked for ages I arrived at an onsite hotel to collect the wristband that would on the following day give me access to Dave Filoni and cast from Rebels.

Better than that, what I hadn’t bargained on was finding a rear entrance to ExCel which was giving access to folks with the right credentials.

To this day I am not sure if I performed some sort of Jedi mind-trick or if I just got lucky, but I somehow managed to wangle my way in a whole hour before the general public.

Right, let’s get these autographs sorted…

Episode 7: Starstruck with my childhood heroes

I entered the autograph hall which was eerily quiet. The previous day I had managed to get a numbered ticket to meet Peter Mayhew but had been unsuccessful in obtaining those for my childhood heroes Mark Hamill and Carrie Fisher – not forgetting Anthony Daniels.

As soon as I could find the floor staff handling the queues I got my numbered tickets. These were called out in batches of 50 I think. I had blagged 2, 3 and 9 respectively for Carrie, Anthony and Mark. It was fate. I was finally going to meet the stars of Star Wars.

I was just calming myself down when from the corner of my eye Anthony Daniels appeared by his autograph table and batch 1-50 was called upon. No time like the present. By the time I made it to the queue there was approximately eight folk ahead of me in a crudely marked out lane system, which Anthony prissily fussed over, organising the gathering crowd. I guess you can take the man out of the droid but you can’t take the droid out of the man. And then he disappeared. The queue grew and grew. The public were let in and by now Carrie’s and Mark’s lines were forming.

Around an hour-and-a-half after initially viewing ‘Goldenrod’ he returned and I finally got the signed picture I wanted for my son Matthew. We exchanged pleasantries, but with so many fans waiting it was only ever going to be a fleeting hello. Sadly, no photography was allowed for any signing sessions with the major stars.

With a spring in my step it was time to join the Carrie queue. Unlike the majority of guests who were sat open to the public, both Carrie and Mark were ‘fenced in’, hidden from prying eyes and adding to the tantalising possibility of meeting the Skywalker twins.

For the duration of the event I had bee 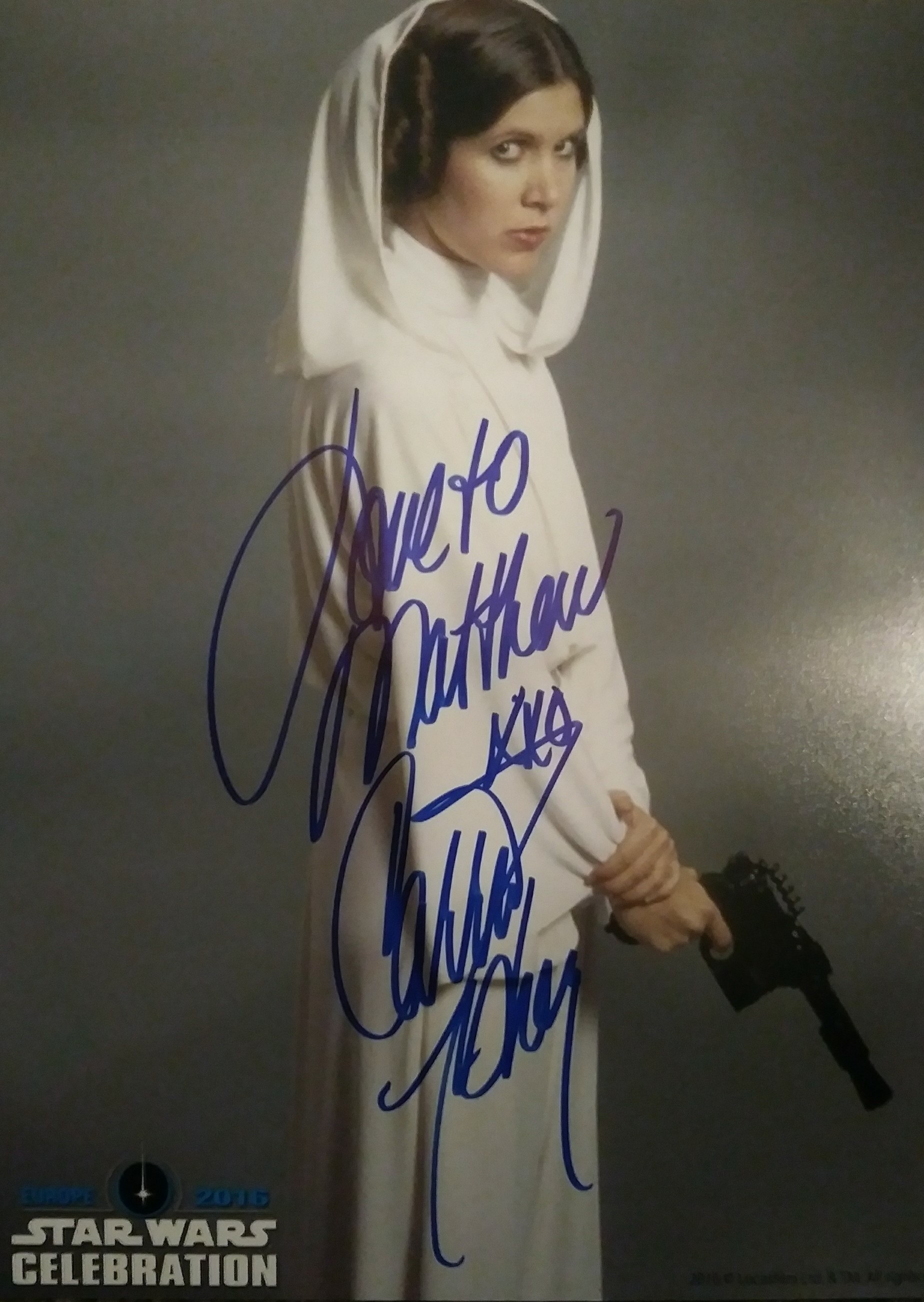 n staying with Richard Amos, a good friend of mine who lived in London at the time and he insisted I stayed for free. As kids, me and Richard would act out Star Wars scenes and he is still keen on the saga today. As his children are big fans of the films and Princess Leia in particular, it was only right to get his family a surprise autograph as well as the one for Matthew.

Eventually I was through the chicane of courtesy boards and Carrie’s table was in sight and she arrived back in the booth as I rounded the corner. As she took to her seat, pet dog Gary joined her. Carrie was tinier than I had envisaged, but her rapier wit remained as large as I had hoped.

Having selected the pictures I wanted signing an assistant scribbled down the recipients – one for Matthew and the other for the Amos family. post-it note saying Matthew, she signed it, looked me In the eye and passed it back smiling and said thank you in a broad US accent.

I didn’t budge. I was waiting for my friend’s signed photo, which was now in front of her.

“Is this one for you too?,” asked Carrie. “What does that say?,” she enquired, adjusting her spectacles as she read the post-it.

“The Amos family. Some friends of mine,” I replied.

Carrie chuckled. “Amos. Amos. I thought it said something else,” she laughed. Let us not dwell on what Amos could be misconstrued as! It was a brief, yet memorable exchange and Carrie was still smiling as I looked back towards her, exiting her booth.

It still doesn’t seem real that she has now been gone for more than a year. Carrie’s passing is a huge loss to the franchise and indeed to the world. I feel privileged to have met her.

Back at Celebration Europe it was time for me to meet Mark Hamill.

I queued again for an eternity. I didn’t mind. In the space of two days, in addition to meeting supporting cast members I had met Chewie, 3PO and Leia. It all felt quite surreal. And now I was about to meet the farm-boy, turned ace pilot, turned Jedi – Luke Skywalker.

There he was. Sat at a large table, chatting with fellow fans as he signed for them. The queue snaked in front of him. I was about 12th in line but now parallel to Mr Hamill. He had just shaken hands with a fan as the next couple excitedly and proudly walked before him.

The couple – he dressed as Luke at the end of A New Hope in the medal ceremony, and she as Leia from the same scene – beamed as Mark looked up towards them. From the look in his eye, this wasn’t going to go the way they thought.

“Absolutely. Yeah,” agreed Mark. I’d had my first interaction with the legend. 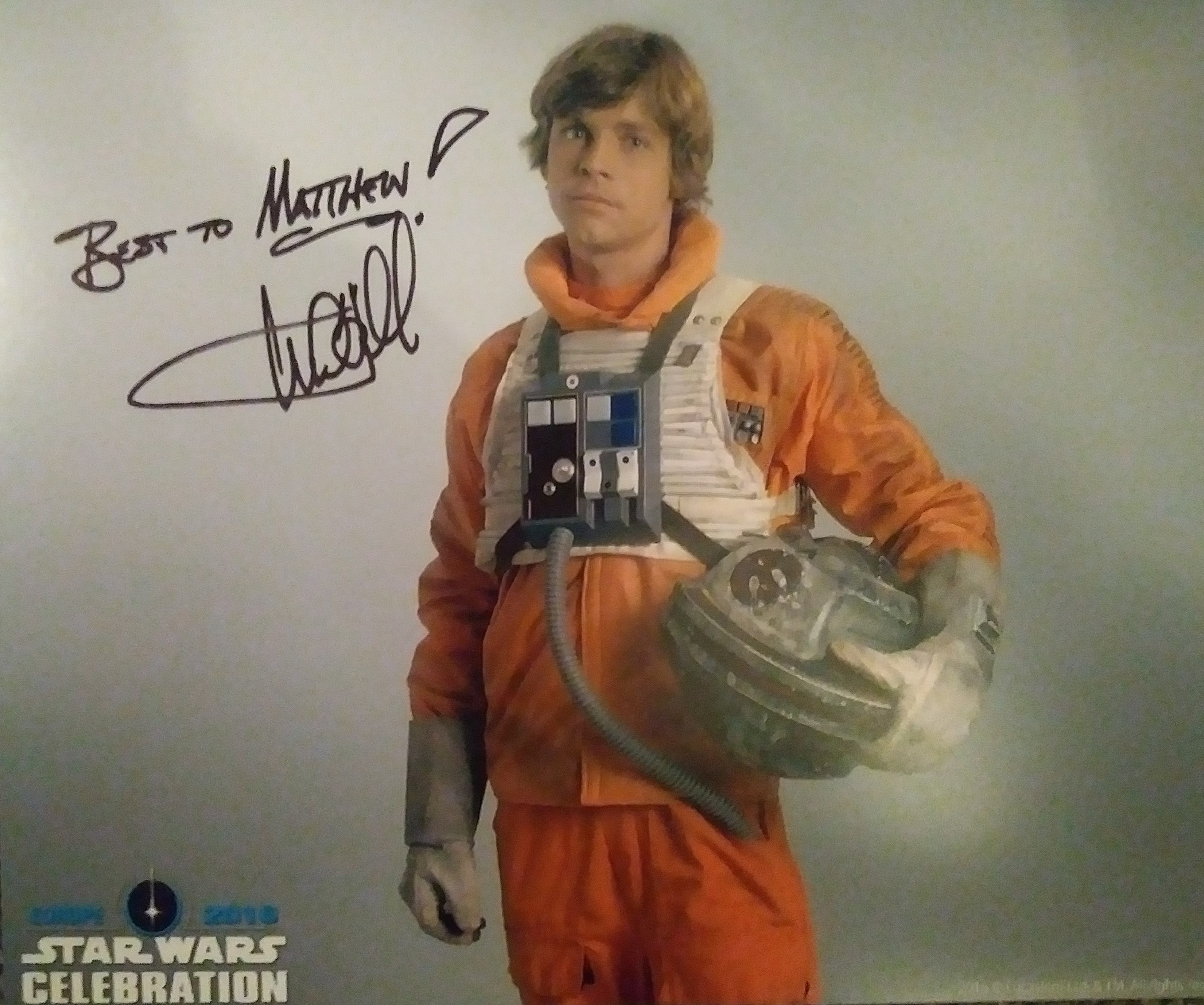 It wasn’t long before I was stood in front of the star of my beloved saga. I’d been asked by the Shropshire Star newspaper to chat with Mark about a forthcoming episode of a UK sit-com that he was making a cameo in.

Mark had a minor role in Man Down, a comedy series featuring Shropshire-born comedian Greg Davies and the episode was due to air within a week of his London appearance.

I shook Mark’s right hand. It wasn’t bionic after all.

“Hi Mark. I see you are going to be in an episode of Man Down with Greg Davies,” I blurted out.

“I work for local press in the West Midlands at the newspaper Greg had as part of his stage act a while back,” I continued as he signed for Matthew.

“Yeah. Greg told me about that. What was it again? A farting dentist?,” he smiled.

“Great,” he laughed. We shook hands once more and that was that.

Of all the things I wanted to 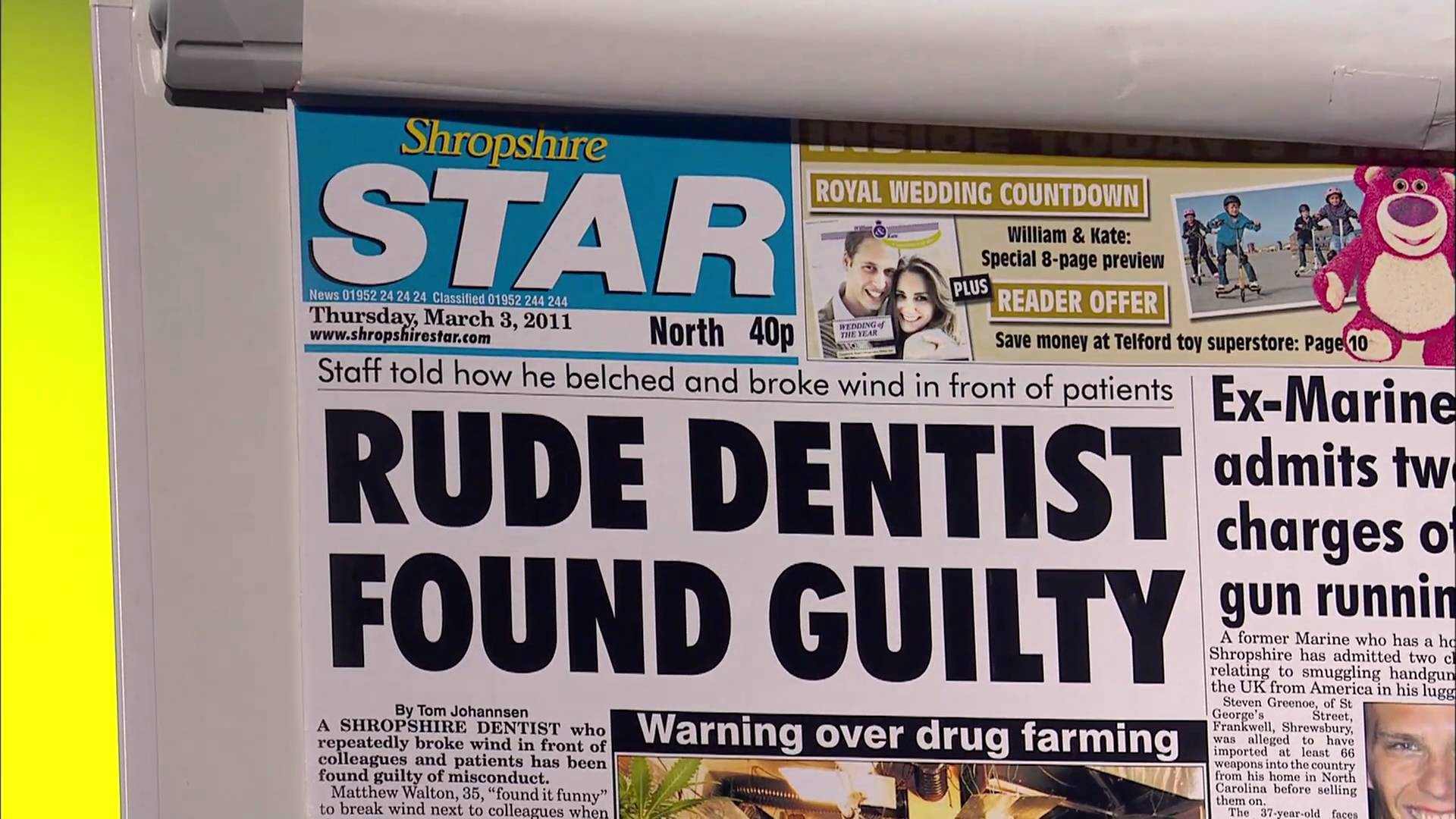 chat with Luke Skywalker about, a flatulent dentist was pretty low on the list. Somewhere just below what unpasteurised space milk fresh from the udder tastes like.

The headline on the Shropshire Star that Mark refers to is seen here.

Later that day I forwarded him the link to Greg Davies on stage. It is worth hunting down on the internet. It’s only a couple of minutes long, but very funny.

Feeling somewhat triumphant, and with a mission well and truly complete, I was just making my way back to meet up with some pals when I passed Matthew Wood’s autograph table. My son is a massive fan of General Grievous so this was an added bonus. 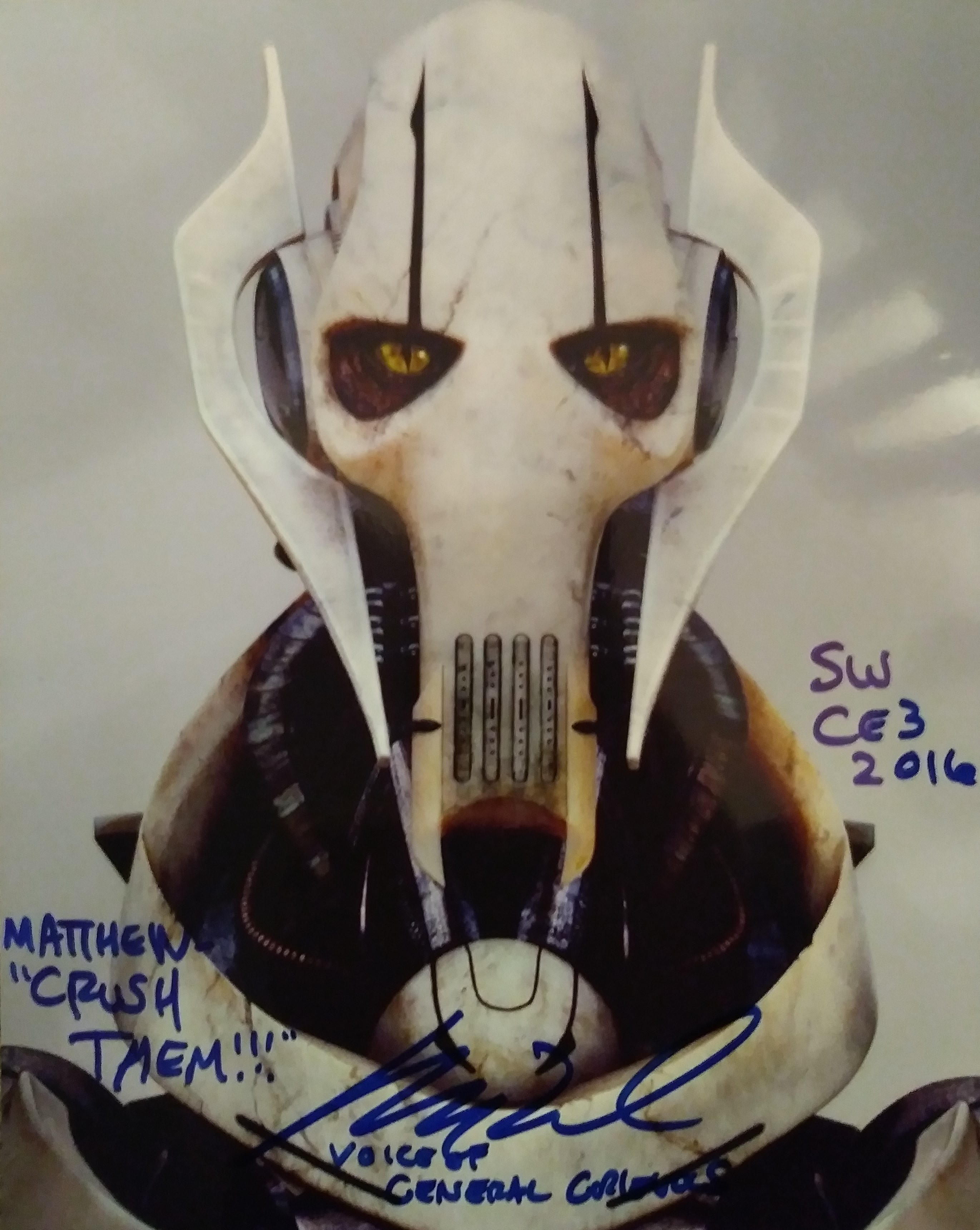 What a lovely guy. We chatted for ages and because at the top of our conversation I had asked him to make it out to Matthew he kept calling me that. By the fifth instance I could hardly correct him. It was a harmless assumption and I did not wish to appear rude. All in all it was a pretty good day. May the Force be with you all – always.