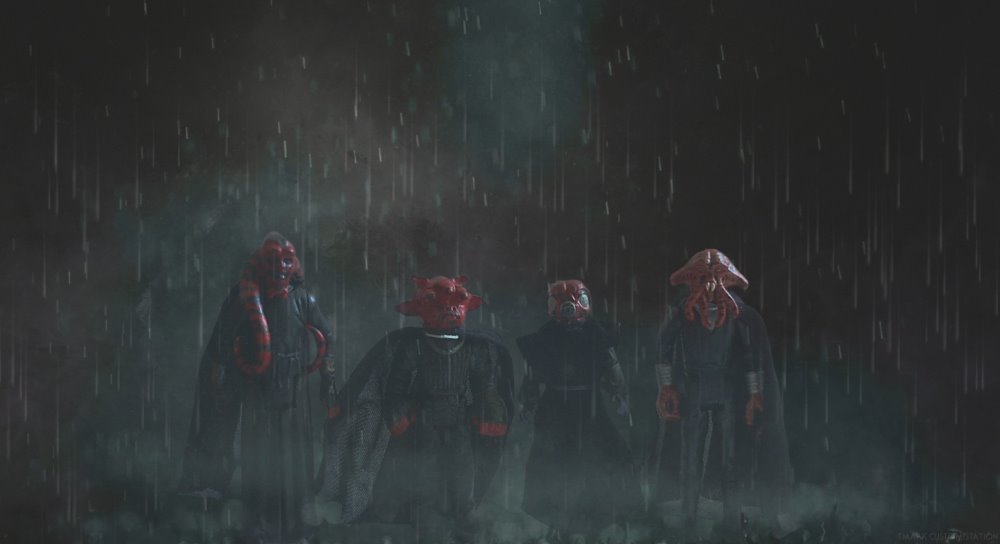 Given their survival from production to date and ever decreasing numbers, I would never contemplate customising a vintage figure unless it was beyond reasonable repair.

Within my fodder (parts) boxes, I had several such vintage figures which sadly fell into this category, amongst these figures were 4 aliens:

These figures looked like they had enjoyed a lifetime of playful adventure, each proudly sporting their battle damage with pride alongside uniquely applied kaleidoscopes of paint and permanent marker.

Before deciding their customising fate, the figures were each cleaned up and repaired.

When inspiration struck, it was drawn from the reading of a Star Wars graphic novel featuring the Sith Brotherhood of Darkness, combined with an appreciation for the tattooed Zabrak, Darth Maul.  These figures were going to form a, pre Darth Bane’s rule of two, band of vintage Sith.

The process began by simply painting each body with a matt black acrylic, some personal features were applied such as Ree-Yees silver chain, Zuckuss coloured gloves and Tessek’s Bib Fortuna’s cuffs becoming armour.  Exposed skin was painted red and their faces decorated with individual intricate markings.

Clothing-wise, I turned to my spare cloth capes from the modern Darth Vader figure which with a little tinkering and stitching looked great on the three taller figures. However rather than re-sizing a Vader cape for the shorter Zuckuss figure, I fancied something a little different and scoured through my ever growing collection of recyclables.  Finding an old rectangular shaped felt like material, formerly a spectacle cleaning cloth, this was folded in half and lined up against our diminutive Gand figure, looking like a cool Sith poncho.

A slit was made in the centre of this soon to be poncho which was then eased over Zuckuss head and stitched into place fitting snuggly around his neck.  I used a black cable tie as a belt to pull the poncho in around his waist, perhaps taking the recycling process a little too far but it provided a great look, with the grip’s head providing the added benefit of a useful lightsaber holder.

Customising can be inspired by imagination, re-vitalise recycled materials, embrace a variety of pastime skills, be lots of fun and in this case resulting in 4 rejuvenated and repurposed vintage figures.