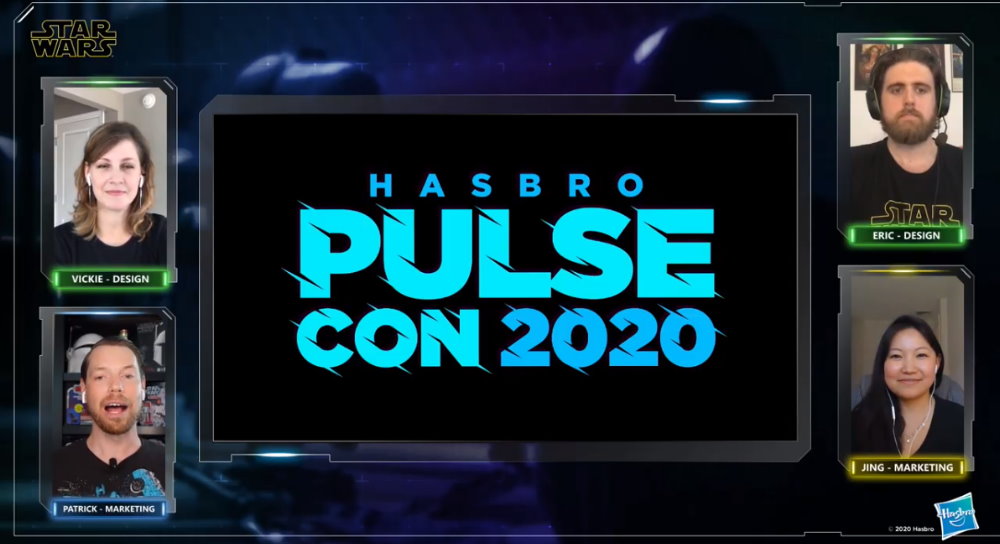 They kick off with the PulseCon exclusives, starting with the Black Series Hoth Wampa, first since 2014 and clean – no blood and guts. From the Vintage Collection there’s the 501st legion ARC Troopers 3 pack of Echo, Fives and Jesse. Then the final exclusive, heroes of Endor from Return of the Jedi featuring Han, Luke, Leia in Endor gear, first time to TBS (mainline later) plus Paploo (only the 2nd ever 6″ ewok) and the Speeder Bike, first time since 2018.

Now, some Mando. They roll the season 2 trailer, then on to Mando Mondays, which will take place for nearly 2 months with news and reveals, starting October 26th. 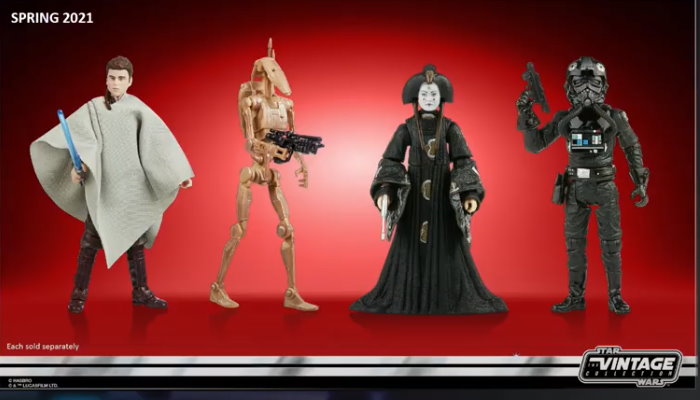 Now, the Vintage Collection, with the HASLAB launch being the big news. TVC line sees the specialty wave for the US, and the 1st wave was Attack of the Clones Anakin Skywalker with better soft goods (new material for the cape) and the PhotoReal tech for the face (now in 3 3/4), Battle Droid from The Phantom Menace with better weathering, Queen Amidala in her black dress from The Phantom Menace and TIE Fighter pilot from Return of the Jedi with more and improved deco. Available on Pulse and major retailer 5pm today in the States. 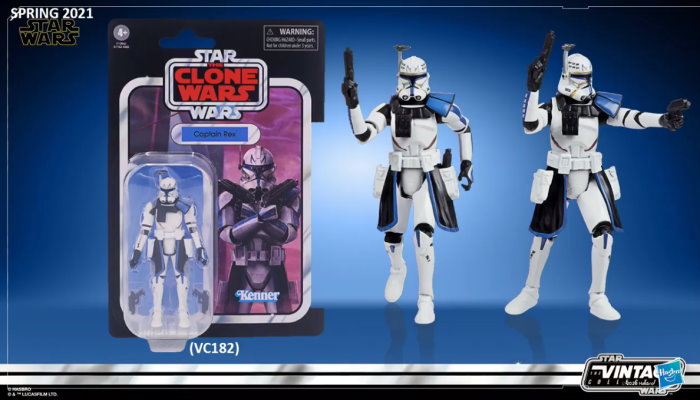 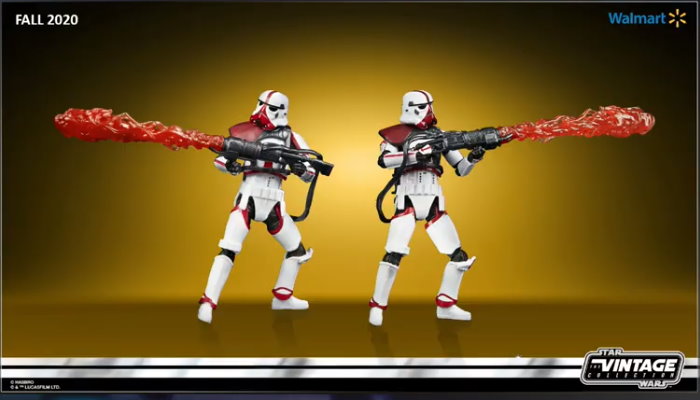 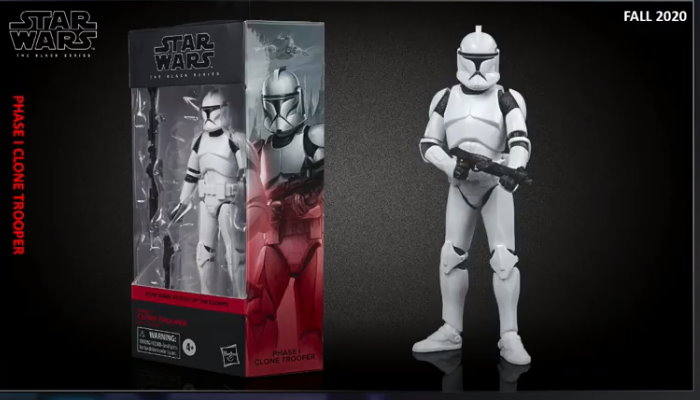 Now The Black Series. New figures coming from across the saga starting with the prequels. All eyes are on this era, and start with the Phase 1 Clone Trooper. New sculpt, better articulation, crisper colour scheme – this is the definitive sculpt. Also comes in the new packaging. 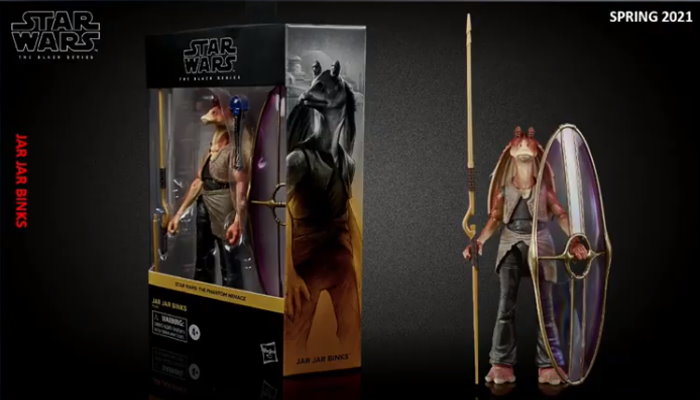 Next, it’s Jar Jar! From the Deluxe Line, with accesories the boomer, new patterning, photoreal on face and eyes, first in The Phantom Menace collection.

On to the Original trilogy. From Return of the Jedi it’s Boba Fett. Empire Fett was the very first figure in 2013. New parts, clean deco breaks, improved articulation – the definitive fett. Rocket is removable, and blown apart blaster from Skiff scene in Jedi. Deluxe pack, so includes, flame, torch and the grappling rope. Beautiful new packaging, flashed in green. Pre-orders 5pm on Pulse, shelves in Spring 2021.

The sequel trilogy and Dark Side vision Rey. Softgoods cape, switchblade lightsaber, that functions at the 6″ scale. Chris Reiff explained how Hasbro learned about the character late in the game, began developing once saw the trailer. First figure in the The Rise of Skywalker blue flash packaging, 5pm on Pulse, shelves in Spring.

The Mandalorian, kicking off with the Incinerator Trooper, with accessories and in new packaging. 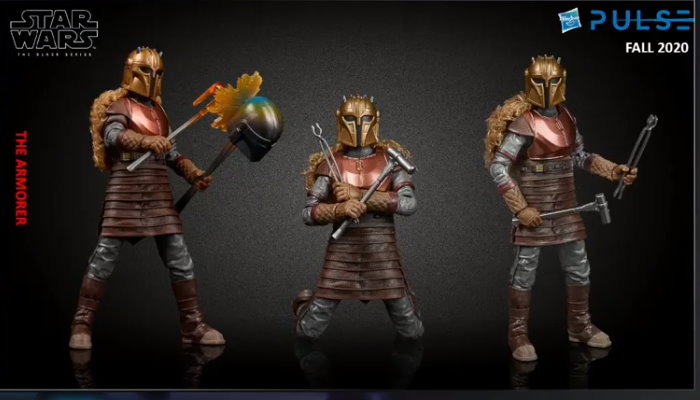 Next, was set to be a Celebration exclusive – the Armorer. mainline later in the Autumn, with some exclusive accessories. The hammer and tongs, helmet and spark effect in same premium packaging (same as the recent Cad Bane and TODO). 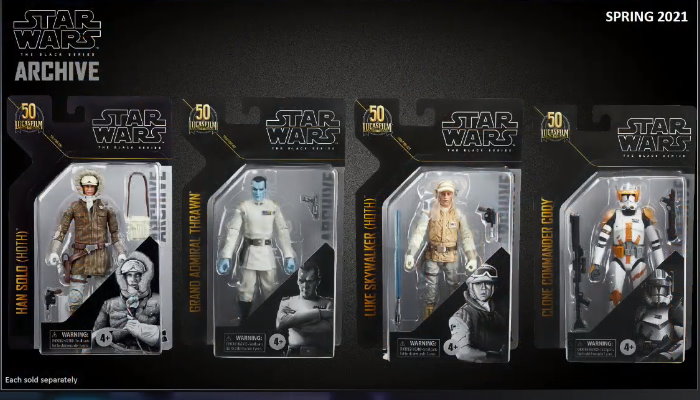 Next, the Black Series Archive Collection. Great response to the line, nothing in 2020 as ESB anniversary line, but coming next – Clone Commander Cody, the Fan Choice winner. Next from ESB, Luke Skywalker in Hoth gear, previously out in 2014 with the Wampa with PhotoReal deco and Han Solo in Hoth gear. Blue coat in 2014 with the tauntaun, now with the brown coat (they checked in the archives). PhotoReal on the face.

Also there’s a new logo – Lucasfilm 50. The company launched back in 1971, so expect to see more of this next year.

Star Wars Holiday Edition figures. First off, Snowtrooper (Holiday Edition) and a holiday Porg. White box. Clearly LFL not thrilled with these, but Hasbro love them. All of the range come with a buddy, like the Porg here. Chris from LFL walks it back somewhat to say they are pleased with them. 5pm pre-order at Walmart, on shelves in Autumn.

Finally, Range Trooper (Holiday Edition) dressed as Santa with a sith trooper sword baton and D-0 looking like Rudolph the Rednosed Reindeer. 5pm pre-order at Target, on shelves in the Autumn. They do look fun as a set. 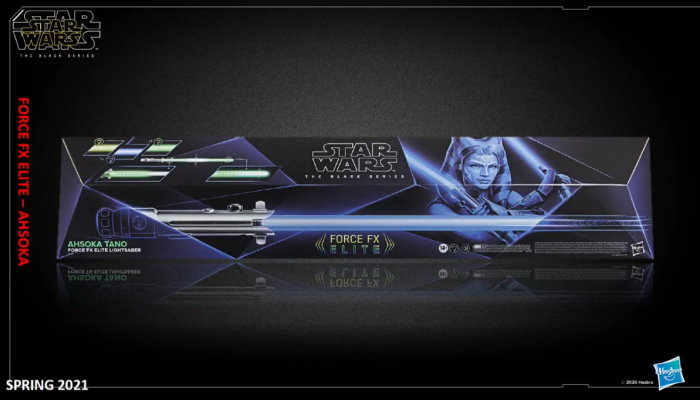 Force FX Elite lightsabers. Kylo Ren, Darth Revan. Palpatine are already out. Coming next is Ahsoka tano’s lightsaber, with the same details as the others. Clashing effects, 3 colour blade (blue, green, yellow) and a stand and a crystal chamber. Gorgeous packaging, fitting in with the other blades and a photoreal image of Ahsoka on the box. Pre-order on Pulse at 5pm.

Mission Fleet is the final segment, vehicles for kids. They show the initial wave of vehicles and figures, as well as the hero vehicle, the Millennium Falcon. Opens for interior play, and a figure in the cockpit.

They show the Galaxy’s Edge, and the Target Smugglers Run Falcon, the Khetana HASLAB release and what connects them – Mark Boudreaux. He retired earlier this year and the team interviewed him about his career at Hasbro.

Stay tuned as more news and images come in.

Hasbro Pulse and the history of playsets: A World Within a World