STAR WARS NEWS IN A SINGLE FILE
Search
Home News Collecting Vintage Vault: What do good manners get you in vintage Star Wars... Unfortunately it seems that vintage Star Wars collecting and unscrupulous dealings go hand in hand in recent times with many good friends in the community falling victim to scams, dishonesty or genuine stupidity.  Reproduction carded figures, poorly described or photographed items and fragile items sent in jiffy bags are just some of the most common.

Therefore, I take great delight when I see posts such as a recent one from Scott Bacon on the Imperial Commissary and even more so when I interviewed him for The Vintage Rebellion podcast.

Just take a look at this photo for a few hours: 103 carded Star Wars figures.  One HUNDRED and three. Highlights of note are not one, but two very desirable Princess Leia Organas on Jedi cards, Boba Fett and of course R5-D4 the true hero of Star Wars.

Now, this isn’t some collection which has been built up over a period of time. It was a chance purchase which all occurred through Scott’s genuineness, good character and ethical dealer practises.

The backstory to this find is that Scott had already purchased some GI Joe figures and due to the fair offer and smooth transaction the seller asked him if he would be interested in Star Wars too as he had a friend who may be interested in selling.  I’ve been in this position several times and it usually leads to a dead end, or even worse a stack of Episode 1 figures!

But as you can see Scott struck gold!  I asked Scott for his advice on how to track down these finds and it was clear that openness and honesty were key. 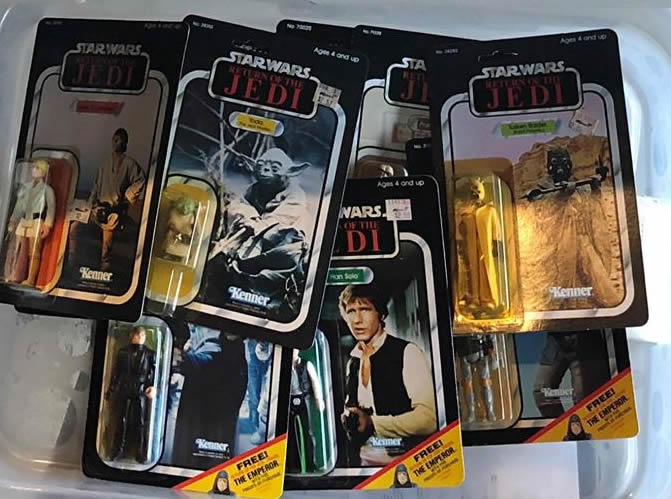 So the next time you’re at a show or browsing online ads, you may want to think about building a rapport with the seller as one open door could lead to another.