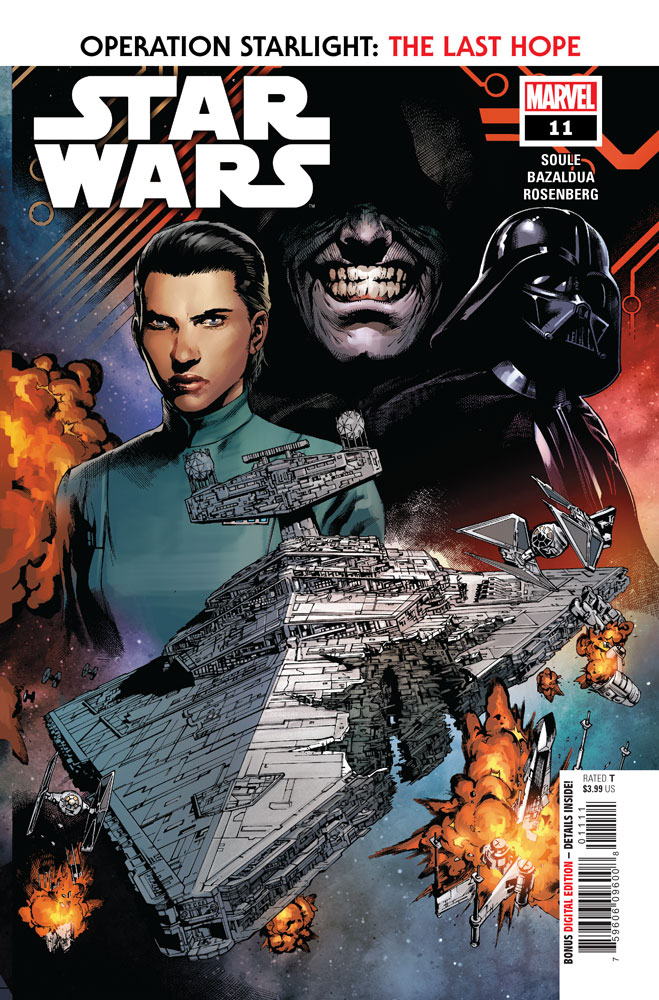 The cunning Commander Zahra has cracked the rebel security codes and will stop at nothing to crush the Rebellion once and for all.

In response, the rebels stole an ancient
protocol droid from the Imperial Museum. With it, they hope to create a new unbreakable code and bring the scattered fleet back together. With the hybroid Lobot’s help, the rebels managed to communicate with the droid and strike a deal.

The other key to rebel survival is the newly founded Starlight Squadron, led by Shara Bey. But Starlight’s first mission could be their last….

The action continues directly from the end of issue 10 as Kes Dameron points his blaster at Lando, who’s understandably agitated at the clear discompfort of his friend Lobot despite the hopes of the Rebellion lying in Lobot’s ability to translate the ancient Trawak language via the old talky droid and contact Starlight Squadron, led by Dameron’s wife Shana Bey. It’s a hugely complicated situation, exacerbated by the Rebellions open distrust of Calrissian and Leia’s ironclad determination to put the needs of the Alliance first.

Cut to Starlight Squadron, battling hard against the ISD Tarkin’s Will and the phalanx of TIE Fighters trying to box them in, when the tractor beams are activated and the X-Wings caught like flies in amber. Thankfully, Wedge Antilles has a brilliant idea, gun it full speed at the ISD, taking advantage of its lowered shields, taking out the beam generators and swooping into the docking bay. As this happens, Lando momentarily distracts Kes to save Lobot but the Pathfinder quickly regains the advantage and as Lando is temporarily locked up Threepio makes a key find – his superior computational ability allows him to crack the Trawak language, negating the need for the self-interested talky droid or Lobots sacrifice.

Commander Zahra is less than impressed at the loss of the docking bay and orders it retaken, while Starlight Squadron manage to acquire an Imperial astromech, taking it for its navigational capacity, but not before Shara loses her A-Wing in an AT-ST attack, leaving her stranded onboard as the rest of Starlight Squadro make good their escape, and we end the issue as Lando contacts Bib Fortuna, promising to feed through information regarding Rebel codes and Kes learns of his wife’s predicament. Leia, more determined than ever, vows to go on the hunt for the ISD Tarkin’s Will.

The story continues to ratchet up as we move from the defeat at Hoth and the loss of Solo and hit that midpoint between Empire and Jedi. The Alliance is really up against it, communications down and nerves ajangling, but the resolve of Leia and the skills of her people keep the ship steady while Lando continues to be unjustly attacked for his imnpossible predicament at Bespin. It’s rare, that Leia’s emotions cloud her judgment, but the abduction of Han Solo is one of those moments and for now she can’t see beyond the personal loss of the situation. To reach the point where Leia realises there was far more at risk for Lando than simply an old friendship will be fascinating to see, and in the hands of this creative team that will surely be a memorable moment.

Star Wars Legends Epic Collection: Tales of the Jedi Vol. 1
$30.49
Buy on Amazon This is a paid link. Learn More. Clicking the link may take you to the Amazon store servicing your country Price incl. tax, excl. shipping.  Details correct as at: 2021-02-28