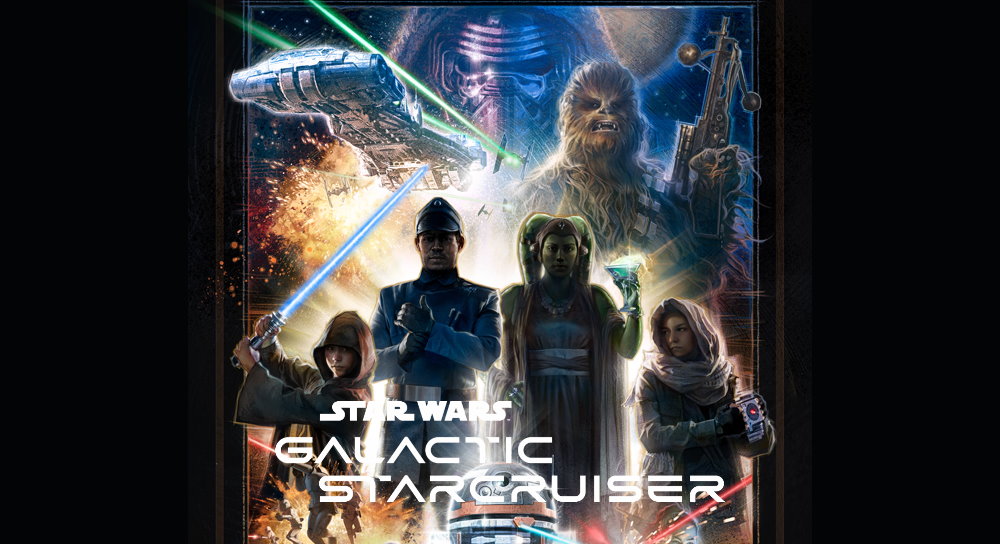 Galactic Starcruiser docks at Walt Disney World Resort in 2022 and here’s a look at the poster that will accompany the mega hotel experience, and a breakdown of the characters on show in the artwork.

Get a first look at the poster for Star Wars: #GalacticStarcruiser, opening at @WaltDisneyWorld Resort in 2022. Then head over to the blog as we break it down, so you can get a peek at what’s to come on this galactic voyage: https://t.co/UoDavN4rG8 pic.twitter.com/qqu0mjrr6I The Halcyon starcruiser, in the upper-left corner, is your home for this two-night adventure. The sleek ship is known for its impeccable service, fabulous entertainment and exquisite dining, all of which you’ll get to enjoy during your vacation. (Side note: You can see a model of the ship right now in Walt Disney Presents at Disney’s Hollywood Studios.)

There are four people at the center of the poster – a youngling wearing Jedi robes and wielding a lightsaber, an adult dressed in the uniform of a First Order officer, a Twi’lek adult, and another youngling who appears to be holding a piece of technology of some sort. These figures are meant to represent you, the travelers, because Star Wars: Galactic Starcruiser is about your choices and how you live your personal Star Wars stories. Do you want to support the First Order? Live like a Jedi in training? Or perhaps become a member of high galactic society? It’s all waiting there for you to discover and decide.

In front of those central figures is an R-series astromech droid – but one that seems to have a few extra bells and whistles. Hmm … I bet there’s a story there, too.

In the lower left, you see passengers enjoying the remarkable cuisine offered in the Crown of Corellia Dining Room, the starcruiser’s enticing supper club. The food and drink certainly seem otherworldly …

The image in the lower right is something I’m incredibly excited for – lightsaber training! That’s right, as part of your experience, you’ll face off with a training remote similar to how Luke Skywalker once did and learn the lightsaber’s ancient ways.

Looming above all this is the intimidating visage of Kylo Ren. Couple him with those First Order stormtroopers charging into the scene on the left-hand side and … I have a bad feeling about this. The Halcyon starcruiser does have a storied past, after all, and a reputation for finding itself in the middle of galactic conflicts. Luckily Chewbacca and his trusty bowcaster are there in the upper-right corner. Remember, it’s not wise to upset a Wookiee!

And don’t miss what’s happening at the very bottom of the poster. There’s something very familiar about those spires – especially to anyone who’s traveled to Batuu. I’ve heard the Halcyon starcruiser is adding that far-flung planet to its itinerary starting next year …

Star Wars Visions: Ronin: A Visions Novel
$24.49
Buy on Amazon This is a paid link. Learn More. Clicking the link may take you to the Amazon store servicing your country Price incl. tax, excl. shipping.  Details correct as at: 2021-08-05

Take a closer look at the cabins at the Star Wars: Galactic Starcruiser Hotel

Take a look at the cabins aboard Galactic Starcruiser