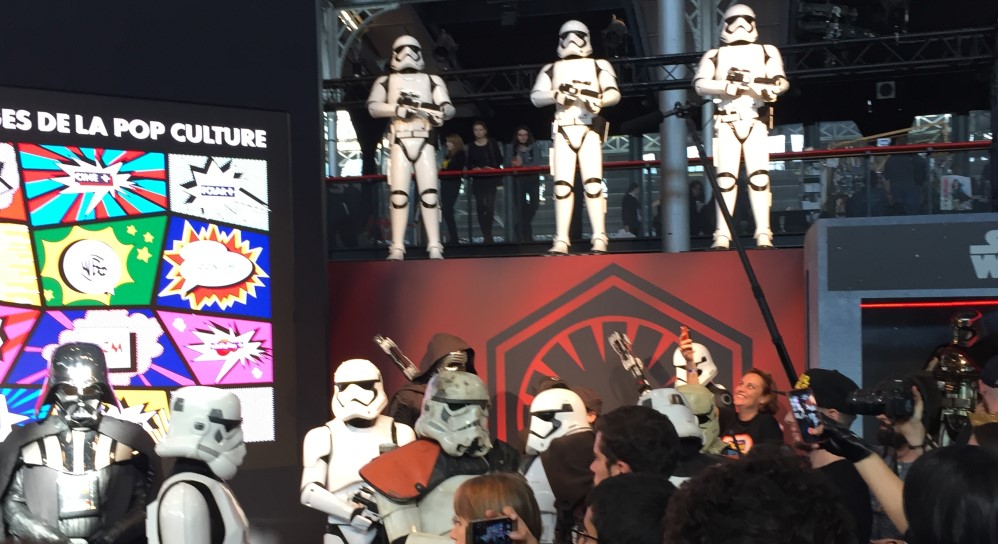 There was a Comic-con buzz in the air in Paris October 27th – 29th 2017 as ReedPOP bought a whole host of Comic, Film and Media attractions to Grande Halle de la Villette.  Unsurprisingly Star Wars was well represented and anyone attending could celebrate the original films as well as be treated to some of The Last Jedi promotion.

The big Star Wars name present was none other than story-boarder, designer and creator of Boba Fett turned blockbuster film director, Joe Johnston. Johnston was in attendance for the first two days of the con and was the subject of two panels. Now before I comment on Joe I must point out that pre-panel entertainment was provided by Star Wars Celebration favourite, DJ Elliot.

As usual he was fantastic with his mix of music and fan interaction.  He was very well received by the crowd (despite not speaking French) and had everybody up and moving as we waited for the panels to start.  So back to the Joe Johnston panels… The first was a celebration of Joe’s career to date (and was incredibly interesting) but the second was specifically about Star Wars.  Joe was keen to share stories about his time at Lucasfilm and was clearly very fond of his time there.  Some key points that he made were:

• The original Falcon looked different however when Space 1999 came out they realised that the Falcon looked very similar to the Eagle Transporter.  Overnight Joe drew as many versions of a different looking falcon as he could.  George picked the Falcon we know and love from one of those designs

• When he worked with Ralph McQuarrie he realised that Ralph was a conceptional artist whereas Joe was a designer.  He felt that together they made a great team as Ralph could take a design and turn it into a great concept

• George wanted to archive everything, so it was difficult to keep the storyboards (included rejected ones) for himself. He did manage to get some though and that includes boards made by George (which he sees as his retirement fund!)

• He played both Stormtroopers in the ‘Falcon entering the Death Star Scene’, as there was only one suit

• The first time he saw the film was at ILM and it had no sound effects, nor the Williams score but they realised it was something that had not been seen before and were excited.  He thinks Lucas screened it to lift their spirits as they were behind, and it worked as they went back to work with renewed passion

• He would like to do a film on Boba Fett but only if the story was good.  He would never have Boba reveal his face!

• George always wanted to push the envelope and take the films in new directions.  However, he doesn’t feel the new films do that.  There was a charm to the originals, which is missing from the newer films.  He thinks they’ll find it, but they will need to go in different directions

• When asked what the best and worst thing about The Force Awakens was he replied, “the best bit was Luke Skywalker” – he couldn’t decide on a worst bit

Throughout the presentation images of Joe’s work on Star Wars were shown.
As if this wasn’t enough of a treat, he also held two signing sessions on each day.  These were strictly limited, and you had to collect a ticket first thing in the morning to secure your place.  This meant that things were not rushed, and it was a pleasant experience.  Everyone got have a quick chat with Joe as he signed.  Amazingly were the signings were free!

The French premium cable television channel Canal+ had a huge stand and were keen to highlight their Star Wars connections.  As well as showing trailers for all the films on a massive screen, the stand was guarded by First Order stormtroopers and two “Executioner” troopers!  Attendees could then walk through a First Order themed tunnel where you could watch a behind the scenes film and have your photo taken with full size models of Captain Phasma and two Praetorian guards.

The large hall of venders and stands had lots of Star Wars goodness to enjoy.  The French garrison of the 501st were present and put on a strong show with parades, models and demonstrations.  It doesn’t matter how many times I see this group it never fails to impress!  Nearly every time I passed the stand, at least one of the members were being interviewed by the media – I think they were the busiest stand of the weekend!
Elsewhere you could visit Kamino and have a go at shooting a clone trooper (with Nerf guns of course).  Again, this attraction was hugely popular all weekend.

The trials of Tatooine VR experience was available for all to try as well as a great photo opportunity with BB-8 that had you on the sands of Jakku with only Rey’s staff for protection.  It was one of the best photo ops I have seen at a convention and hugely popular.

Paris Comic-con was a enjoyable event that catered for everyone.  It was incredibly well-organised and had some good attractions and panels.  If you want to do something a little different (and maybe do a bit of sight-seeing as well), I can highly recommend keeping an eye out for the next one and treating yourself to a weekend away.