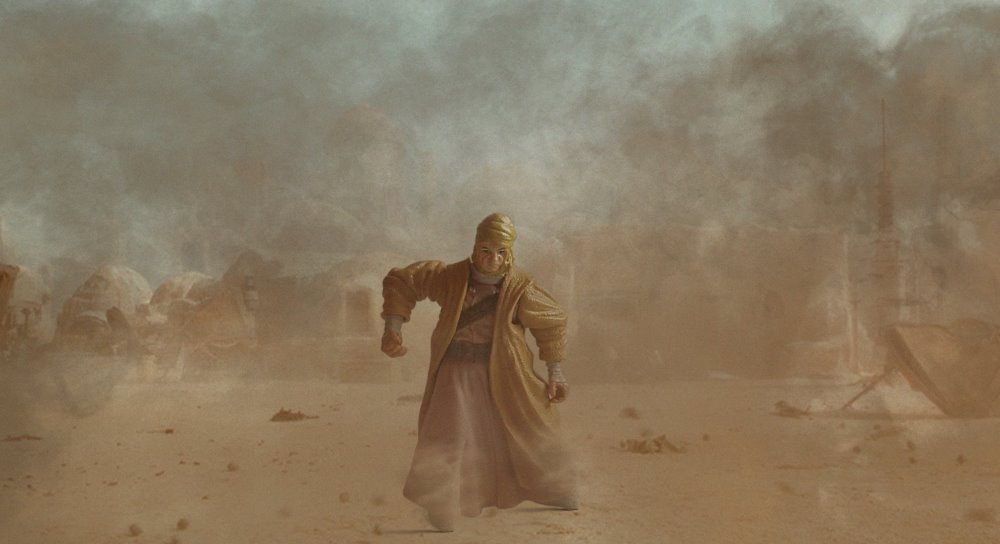 As mentioned within one of my recent customising articles, I promised to share the fate of my loose Vintage Dengar Bounty Hunter head, the inspiration for which, including creative license, demands more explanation than the customising process itself.

This custom began by searching for a suitable body, in this case I opted for a Tusken Raider male, possibly the victim of a post Shmi rescue.

Old meets new as Dengar’s vintage era head was paired with a modern Tusken Raider.  This particular Tusken is in a fixed position, leaning forward in a posture resembling that of someone digging, a Tatooine Sand Castle perhaps.

Both of the figures shoulders and elbows had movement, but articulation was restricted to rotational and swivable respectively.  A design which afford resting a Gaffi stick or rifle across his waist or aloft likely accompanied by his haunting territorial howls.

Dengar’s bandaged head was painted with an acrylic matt paint similar to blend with the Tusken’s clothing, his facial scars were highlighted with a light red wash.  When dry, Dengar’s head was fitted to the Tusken Raider body completing a simple but still satisfying custom.

As well as creating custom figures, I also enjoy creating backstories for them, continuing my Star Wars imagination from childhood into adulthood and an opportunity to practise some creative writing.

Inspiration for this custom was drawn from Dengar’s racing exploits. 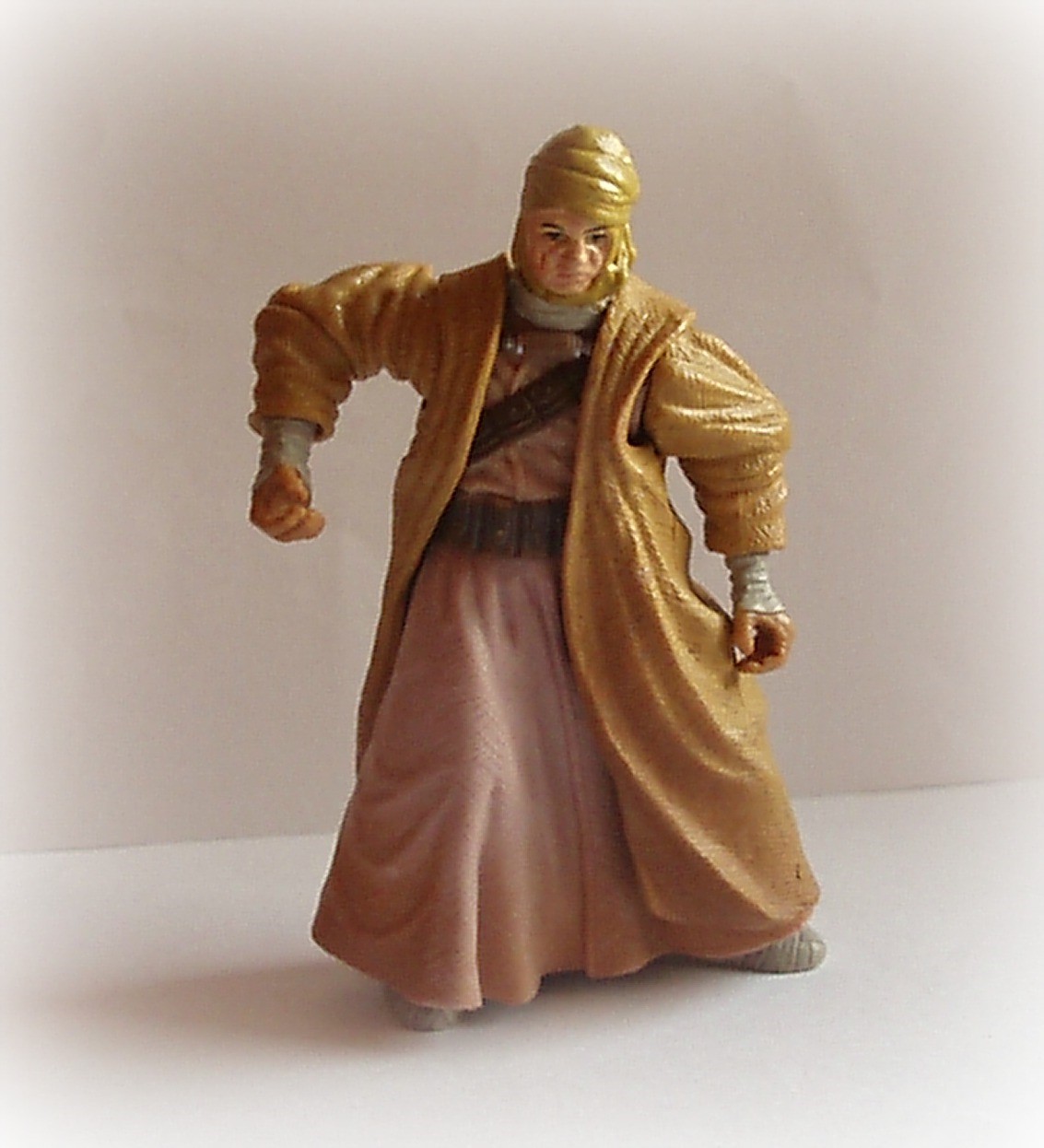 As a competitive swoop rider, Dengar once raced against a younger, cockier Han Solo through the Agrilat swamp on Corellia.  To the victor the spoils and defeated the toils.  Losing this encounter was the least of Dengar’s concerns as he was left badly injured and barely alive.  His damaged vehicle was recovered by local scavengers and his body passed onto Imperial custody as required by local law.

Transferred into the care of Imperial Scientists, the unconscious Dengar proved primarily, a compliant patient and was subjected to more than just essential medical care.  Now a test subject for an Imperial exploratory project, Dengar’s mind was wiped for to rendering him malleable and augmented by neuro-implants with his body also upgraded by cybernetic enhancements.

As the prototype template for an intended Super Stormtrooper program, this unit would require field testing, Dengar was activated and put into operation as an assassin for the Galactic Empire.  Despite proving both efficient and effective, his controllers still reserved some concerns, despite their best efforts to erase his pre-test memories, Dengar would periodically experience episodes which rendered him uncontrollable.  Intensive analysis determined there was, but could not identify, an event within Dengar’s past which was firmly rooted to the very core of his memory.

A combination of intrusive conditioning treatments were applied with some success, until one fateful mission when Dengar was tasked with terminating the Holy Children of Asrat.  When faced with completing his objective, something stirred deep within Dengar.  A potent sense of despair and pity followed by an uncontrollable series of emotions coursing through his mind, his circuits, interlaced with an intense fury, but not for those before him, no something, someone, yes someone else.  Solo, yes Han Solo.

This latest episode released Dengar, he was now unencumbered from involuntary control, he was now in control.  He refused completing this mission, after all it was the Imps mission, not his.  He spared the lives of his intended prey and allowed them to make good their escape.  With this act, Dengar abandoned his Imperial Controllers and was rewarded with a bounty put on his head, a head which was now clear and with one thing in mind, Solo would not live to curse the day he crossed Dengar!

Now operating free from Imperial interference, Dengar would bide his time as a free-lance gun for hire.

Purchased whispers and beaten whimpers would later guide this vengeful Bounty Hunter towards Solo’s trail on the desert planet Tatooine.

Upon arrival, in an effort to avoid local Imperial attention or wannabe Bounty Hunters, Dengar elected to set The Punishing One down in the outskirts of Mos Eisley, and away from prying eyes.

With ship secure, Dengar slowly worked his way through the back alleyways, all the while scouting for opportunities to disguise his famed appearance.  Eventually, Dengar happened upon some local garb, it mattered not that some poor unfortunate was still inhabiting them.  By Dengar’s reckoning, possession was nine tenths of the law and bolt from his blaster would happily advance the other tenth to enforce a quibble free transaction, a transaction of luck from a certain point of view.

Comfortably housed within his newly acquired garments, Dengar could now blend with and move unnoticed amongst the bustling market crowds, enabling his unfettered passage to information hotspots.  Dengar’s luck continued with an opportune encounter with the unusually helpful Garindan Long Snoot, Kubaz, this new acquaintance would share the last known whereabouts of Captain Solo, for a small fee of course.

Hotly on the heels of his long intended target, Dengar worked his way through the Mos Eisley Spaceport, eagerly counting hangars as he went; 92, 93 and finally, 94.  The atmosphere was palpable, their final encounter was close at hand, well, so Dengar believed.  Almost immediately as Dengar had arrived at his destination, there was an almighty commotion behind him.  His stealthy approach was now being sabotaged under the heavy feet of a squad of Sandtroopers which brushed past him. Entanglement with the local Imps was an unnecessary risk and best avoided, at least for now.

Dengar withdrew into the covering crowd of onlookers as the Sandtroopers loosed their E-11 blasters, swiftly retorted by a volley of return fire, then came the ear bursting roar of engines.  Engulfed within the plumes of freshly stirred Tatooine sand, Dengar could only watch from the dusty market streets as the legendary Millennium Falcon sharply climbed from her hangar confines, level, and then swoop, before tearing towards the planets exosphere.

Cursing the double dealing Garindan and his bad fortune at the time, Dengar’s Tatooine restraint would be rewarded later, as along with an elite band of fellow Bounty Hunters, the Empire would hire him to hunt Captain Solo.  Something he would gladly have done for free, now the Imps were off his back and the credits, well, they were just a bonus.

Now you’ve read my writing attempt, why not give it a try yourself.

The Mandalorian: Simon Pegg wants to return as Dengar…just saying