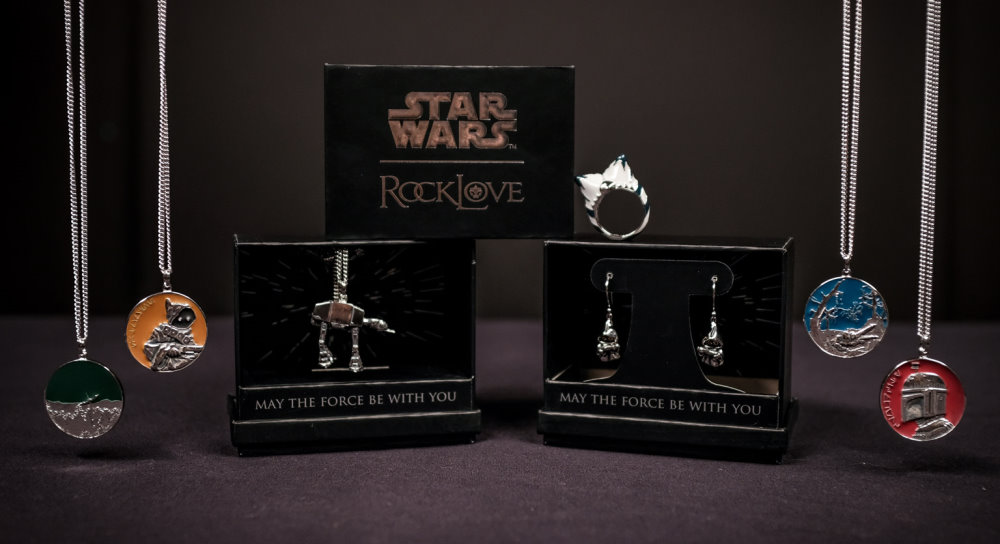 RockLove Jewelry have announced a new collaboration with Star Wars and those lucky enough to go to Comic Con International will be the first to be able to purchase it.

The collection designed by lifelong fan Allison Cimino features some iconic characters and objects seen in the movies. Allison spoke to starwars.com and explained her inspiration.

As a child Cimino identified with the lovable rogue Han Solo. “He was this cool, laid-back space scallywag who I wanted to emulate.” But the new collaboration is more about unsung heroes than legends of the Rebellion. Alongside the AT-AT, an articulated GNK droid can be made to shuffle across a desk. A ring evokes Anakin Skywalker’s former Padawan Ahsoka Tano. And a series of medallions act as cultural currency to render unforgettable characters and scenes in sharp relief.

The one item of jewelry that has caught many people’s eyes is the Ahsoka Tano ring!

The Ahsoka Tano Ring is a special collaboration between designer Allison Cimino and Ashley Eckstein, the voice of Ahsoka Tano in Star Wars: The Clone Wars. Limited Edition of 1,000, the ring includes an authenticity card autographed by Ashley Eckstein.

This Star Wars™ | RockLove jewelry design is Limited Edition of 1,000 units and includes an authenticity card autographed by Ashley Eckstein. Her Universe and RockLove exclusive. Every Star Wars™ | RockLove piece arrives in a signature Star Wars™ | RockLove Collector’s Box, with embossed exterior and metallic silkscreened art inside. The two fitted pieces stack, with the jewelry mounted in a theatrical widescreen proscenium: a compelling addition to any display case.

The final part of the collection is the Planetary Medallion Series.

One of the amazing things about Star Wars is that it demonstrates a feeling of vastness and possibility by featuring a universe with so many varied ecosystems,” Cimino says. To celebrate the many planets in the original trilogy, Cimino carefully carved a series of coin-like medallions, limited to 1,000 units each, with scenes modeled after locations including Tatooine, Hoth, Cloud City, Dagobah, and the forest moon of Endor. “Hoth, for example, is an army of AT-AT and AT-ST walkers set against the jagged ice mountains,” Cimino says.

Cimino explained how the medallions worked to starwars.com

On the flip side, the design features a character closely associated with each place, including a Jawa, a Wampa, Boba Fett, Yoda, and an Ewok. “I wanted the Planetary Medallions to be matte to feel rugged,” she says of the design, “as if these coins were actual souvenirs collected by visiting their demanding ecosystems…Developing these coins was my homage as a Star Wars fan — they encompass the most memorable face from that world paired with the most awe-inspiring scene.”

The collection will be available first time at San Diego Comic-Con 2019 at the Lucas film pavillion and then online at Rock love beginning July 18, 2019.

She’s got a THERMAL DETONATOR! And a Jawa, and a Gonk Droid, and at AT-AT that really walks… https://t.co/s2TbHPo1ly

Ashley Eckstein on The Clone Wars Season 7: “I think these episodes are very important”

The themes for RunDisney’s Rival Run Weekend are revealed

Fashion Force: Step into the light with Po-Zu