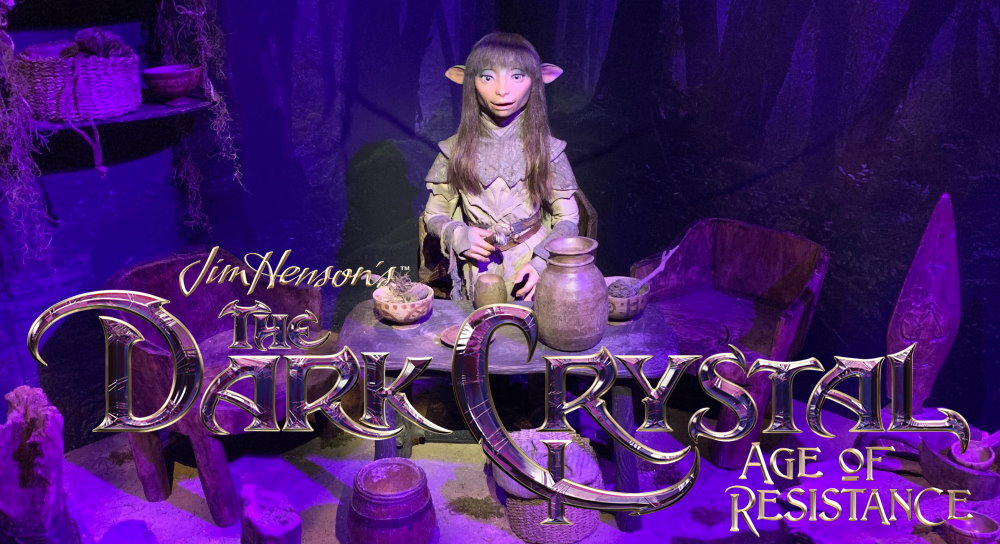 From the twin suns of Tatooine to the three suns of Thra there have always been connections between Star Wars and the epic world of The Dark Crystal.  From the storytelling (both Star Wars and the Dark Crystal draw upon Campbell’s Hero’s Journey) to the puppetry (Jim Henson’s Creature Shop worked on Yoda and many other original Star Wars creatures) there are plenty of parallels.

Today marks the release of The Dark Crystal: Age of Resistance onto Netflix, so what better way to celebrate than to explore some of these connections, together with photographs from the current Dark Crystal exhibition at the BFI Southbank.

The Dark Crystal: Age of Resistance boasts a stellar lineup of amazing voice talent, some of whom have stepped into the galaxy far far away. Most notably is Mark Hamill’s appearance as skekTek, the scientist; Mark here uses his years of experience as a voice actor to bring this evil Skeksis to life.  The Skeksis emperor, skekSo, is voiced by Jason Isaacs, who Star Wars Rebels fans will remember as the Grand Inquisitor. And fan favourite character, the whimpering Skeksis Chamberlain skekSil is voiced by Simon Pegg, who portrayed Dengar in Star Wars: The Clone Wars, and Unkar Plutt in The Force Awakens.

Several puppeteers who work on The Dark Crystal: Age of Resistance have also worked on Star Wars. There’s BB8 puppeteer Dave Chapman, who portrays the Skeksis emperor. In the making of documentary that was screened alongside the BFI exhibition, Dave expresses his childhood love for both The Dark Crystal and Star Wars, so it must be an especially exciting time for him to be involved in both franchises!

Damian Farrell performs The Heretic, a banished Skesis. He also is a creature and droid performer in Star Wars, working on the Vulptex in The Last Jedi, and portraying Munduri in The Force Awakens.

Helena Smee performs Seladon, The Collector and Mira in The Dark Crystal whilst in Solo: A Star Wars Story operated the radio-controlled face of one of the drunk Gotarites among other work.

Helena’s sister Kat Smee also crossed both franchises, with Dark Crystal credits including Deet, The General, The Chamberlain, Aughra and Hup whilst she was hired to assist Frank Oz with Yoda in The Phantom Menace and has worked on other Star Wars films since.

Thanks to Dee Tails for the heads up on some of the above.  There are many more names to add to the list of creature performers and puppeteers who have worked on both franchises, particularly if you start looking at the original Dark Crystal (with performers such as Frank Oz, Mike Quinn, Tim Rose, Hugh Spight, Mike Edmonds and producer Gary Kurtz) and one thing that comes across very strongly in the making of documentary ‘The Crystal Calls’ is the respect and admiration everyone has for the craft, the performance, and the legacy of Jim Henson’s vision.

If you can make it to the BFI at London’s Southbank I highly recommend the Dark Crystal exhibition. You’ll get up close and personal with Skeksis, Gelflings, Podlings and even a Fizzgig or two! Hurry though as the exhibition closes on September 6th.

In the meantime, The Dark Crystal: Age of Resistance is currently available on Netflix, so prepare to return to the world of Thra for an exciting epic adventure!

The Dark Crystal [Blu-ray]
$22.99
Buy on Amazon This is a paid link. Learn More. Clicking the link may take you to the Amazon store servicing your country Price incl. tax, excl. shipping.  Details correct as at: 2021-08-01