Rob Goult brings us his review of EFX’s Millennium Falcon

Back in July 2009 at SDCC, eFX announced that they were planning on releasing a new line of Star Wars “Precision Cast” Replicas.

As the Empire Strikes Back is my favorite of all the Star Wars films I was totally sold on this new replica for my collection, this replica then seemed to enter development hell and for the next 7 years EFX published development shots on their website and rolled out the prototype at various conventions but with no firm release date or price. 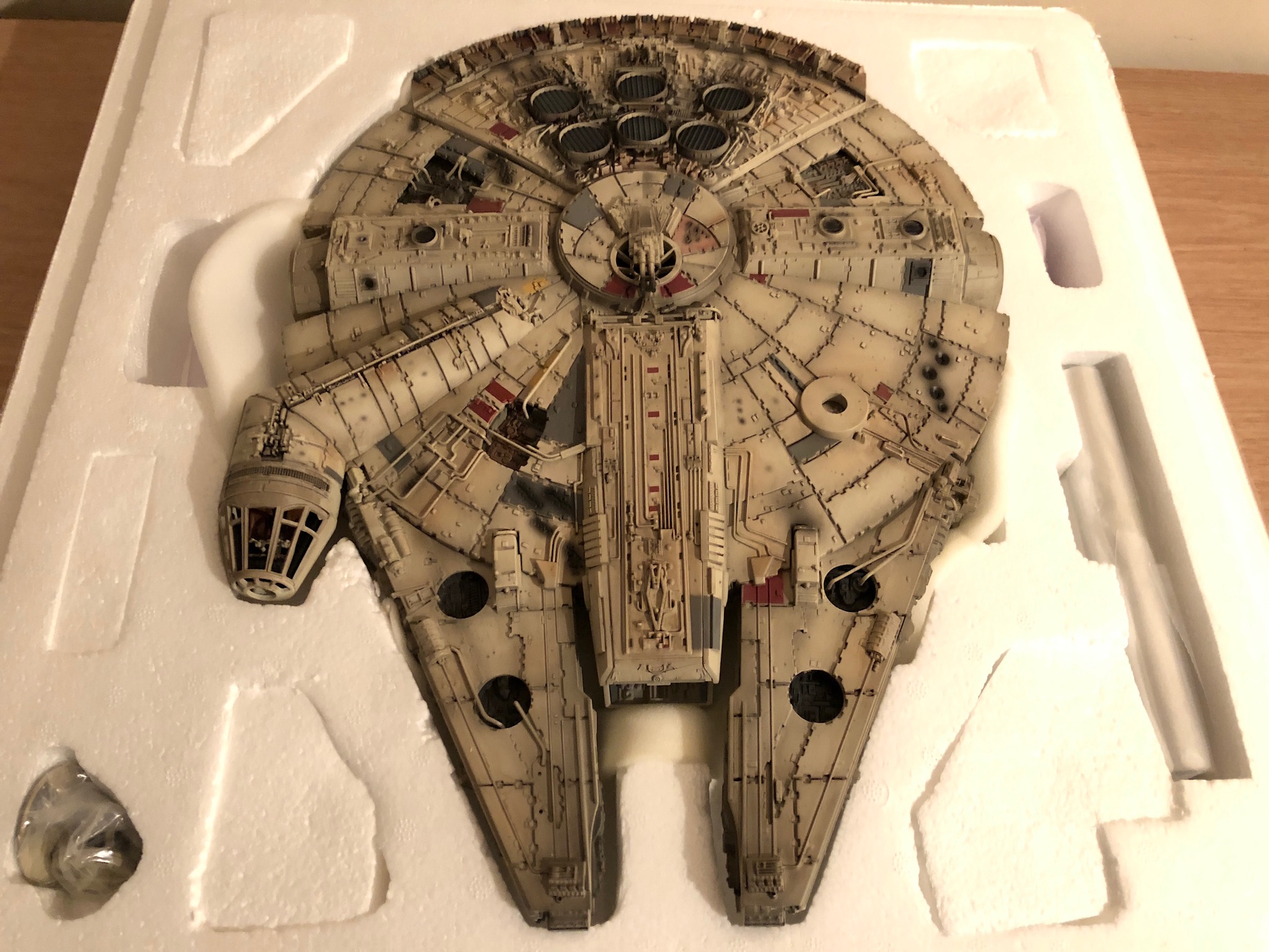 Then in 2016 it resurfaced at SDCC on a new round, mirrored base in line with their helmet stands and the following month the pre-order for it went live retailing at $599, double what it was initially announced at.

Fast forward another year (whats an 8 and a bit year wait to a Star Wars Fan!) and the very long-awaited EFX Millennium Falcon has finally shipped.

The Falcon comes very well protected in not one, but two, outer shipping boxes.

Opening the box you’re greeted by an image of the model printed onto a cardboard cover.

Removing this and a layer of polystyrene the mirrored display base is in the top part of the packaging. There is a layer of film over the acrylic base that needs to be removed.

4 screws, that are now EFX’s standard for their prop bases need to be removed before the film can be peeled off.

The base houses the battery compartment for 3 x AA batteries that power the lights, more on this later. I like the fact that EFX have gone for a battery based solution over a power adapter like Master Replicas did with their Studio Scale Millennium Falcon (I hate having to use a 2 – 3 pin plug adapter!). The base also has an on/off push button on the rear that is easily accessible.

As with all other EFX prop replicas there is a Prop back story and Certificate of Authenticity all wrapped up nicely in a little black envelope, also included are the prop instructions. Removing the next layer of polystyrene the Falcon is revealed in all its glory. After seeing a number of pictures posted online I wasn’t sure about how the paint work would look in the flesh but I have to say I wasn’t disappointed.

There will be a lot of purists out there that could happily spend hours picking holes in the paint work but for me it looks just right and when viewing it from a few feet away I felt transported to a long time ago in a galaxy far, far away.

The level of detail on this replica is amazing for the price point and the Falcon is quite some weight. The main construction materials are Die Cast and ABS plastic.

The Falcon comes in at approximately 34cm long by 28cm wide.

On the base of the replica is the connecting cable that feeds through the metal tube that connects the Falcon to the base. It was quite fiddly feeding the cable through without straining the wiring but after a little while I managed to get the cable through.

Once connected to the base the Falcon sits steadily on its stand and can be rotated to best choose your preferred angle. Although as the cable attaching the base to the Falcon itself is quite a snug fit I wouldn’t recommend rotating it too far!

The Radar Dish is attached by magnets and again can be rotated to your preferred position.

On display I have to say that it is absolutely stunning, and not having space for the likes of a Studio Scale Falcon or a Deagostini Falcon it’s easily displayed. One word of warning though, this replica will not fit in the Ikea Detolf cabinet, no amount of cajoling will allow this to fit. The base is such that the door will not shut properly.

The lights add a very nice touch and they are bright and clear, if you look inside the cockpit you can also see Chewbacca and C3PO in the corridor. There is minor light bleed around the edges of the cockpit but nothing a small amount of modelling putty won’t fix.

Overall I have to say I am very impressed with EFX’s first offering in this range, after waiting over 8 years to get this prop it had been worth the wait.

It’s not perfect and there are better versions out there, the Bandai Perfect Grade Falcon springs to mind but I neither have the modelling skill nor time to do that version justice.

Overall, for the price point, it’s just right, good job EFX, when is the next one coming out!! POTENTIAL SPOILER: Millennium Falcon to get a new look for Episode IX

Hop back 39 years to 1979 and the first Millennium Falcon