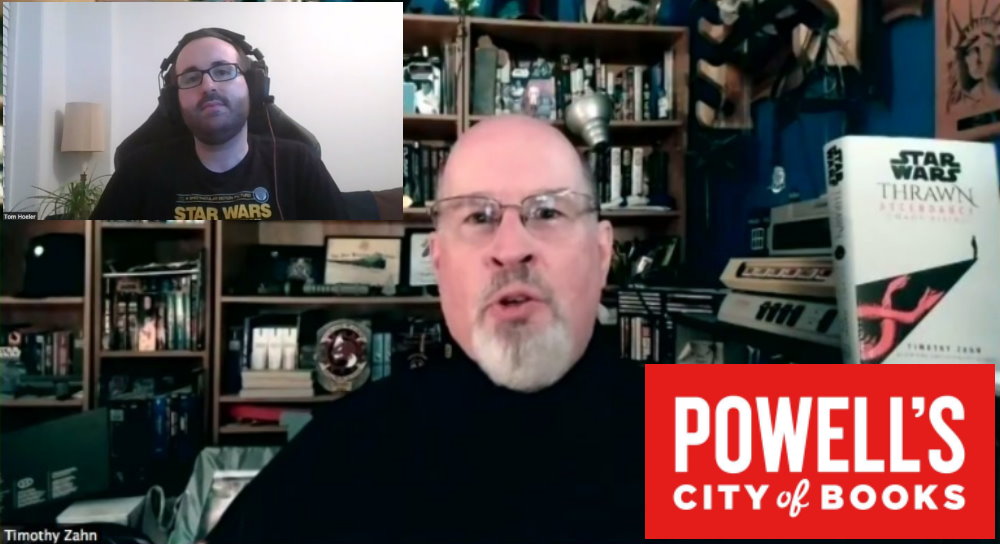 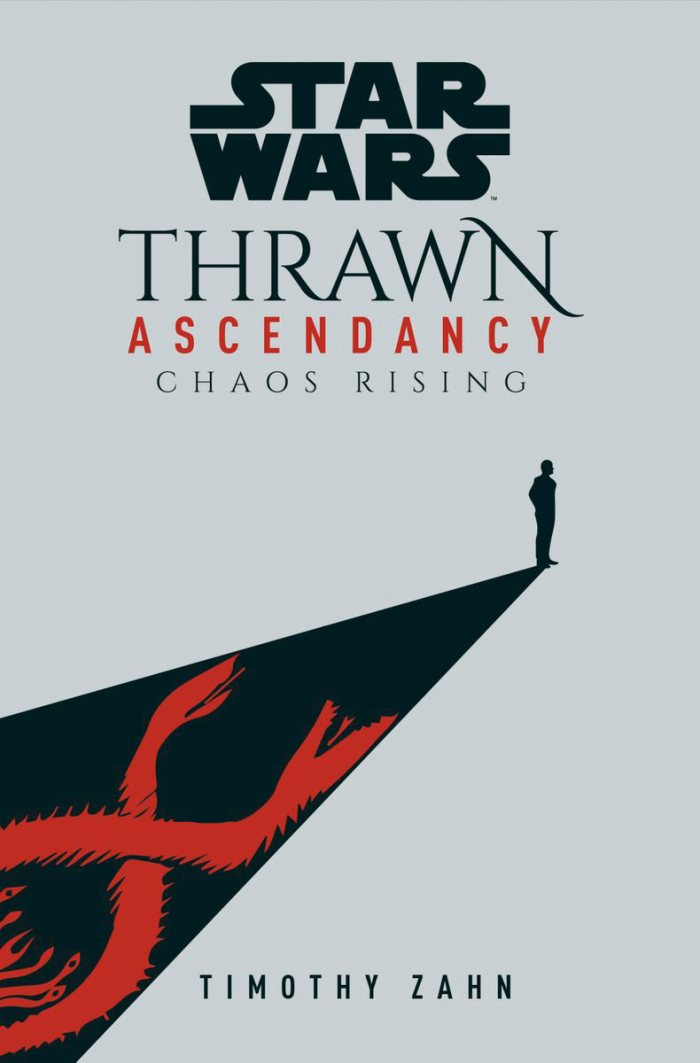 Beyond the edge of the galaxy lies the Unknown Regions: chaotic, uncharted, and near impassable, with hidden secrets and dangers in equal measure. And nestled within its swirling chaos is the Ascendancy, home to the enigmatic Chiss and the Nine Ruling Families that lead them. The peace of the Ascendancy, a beacon of calm and stability, is shattered after a daring attack on the Chiss capital that leaves no trace of the enemy.

Baffled, the Ascendancy dispatches one of its brightest young military officers to root out the unseen assailants. A recruit born of no title, but adopted into the powerful family of the Mitth and given the name Thrawn. With the might of the Expansionary Fleet at his back, and the aid of his comrade Admiral Ar’alani, answers begin to fall into place.

But as Thrawn’s first command probes deeper into the vast stretch of space his people call the Chaos, he realizes that the mission he has been given is not what it seems. And the threat to the Ascendancy is only just beginning.

Zahn will be joined in conversation by Tom Hoeler, editor at Del Rey Books. 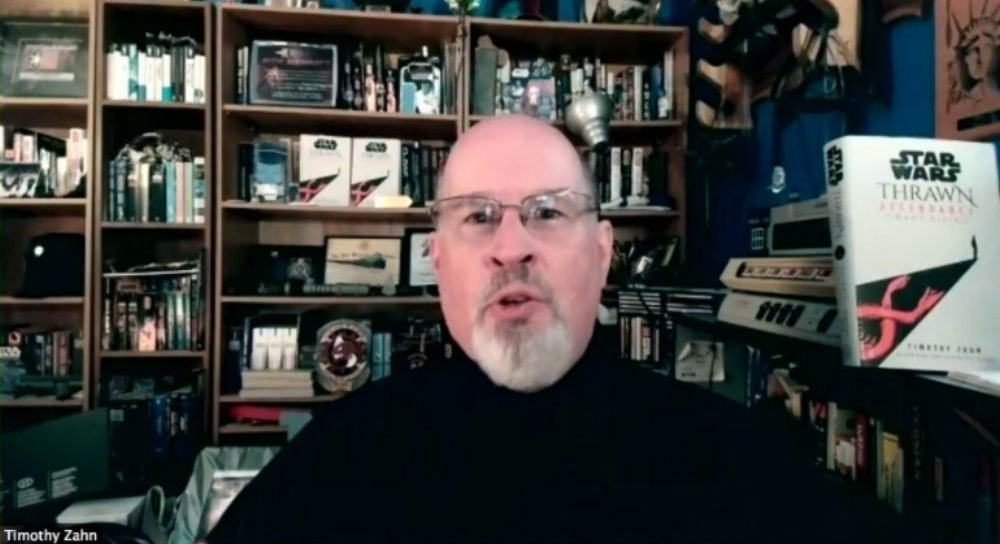 Timothy Zahn, Thrawn creator and author, wants to write about what happens with Ezra Bridger and Thrawn after they disappear in the Star Wars: Rebels finale—or at least read what Dave Filoni is going to write about them.

But in the meantime he’ll keep promoting Star Wars: Thrawn Ascendancy (Book I: Chaos Rising), released in the U.S. at the beginning of September. Book one of the new trilogy provides the history of our blue-skinned lead and how he came to be a brilliant military strategist from the Unknown Regions. 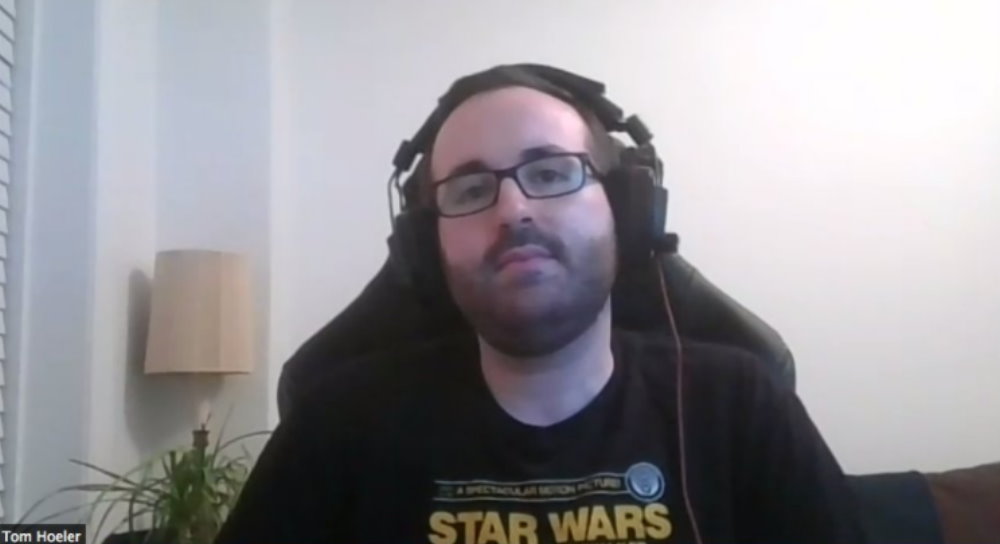 During the Zoom conversation presented by Powell’s Books, Zahn was joined by Tom Hoeler, editor at Del Rey Books, on Friday night to discuss the latest book and the world-building opportunity a predetermined trilogy deal offers.

Although Bridger, Eli Vanto, and Pablo Hidalgo were mentioned, this was Thrawn’s night.

“I understand him. I respect him,” said Zahn on his original character and the relationship they’ve now had for nearly 30 years. “We’re friends and I get to shine the spotlight on him.”

He also gets to put the Ascendancy—its 9 ruling families (that Zahn was quick to point out can change in number), politics, and policies of it—under the microscope for a fan base that loves to live in the details. And those details don’t often add up to Thrawn being embraced by the majority of those around him. 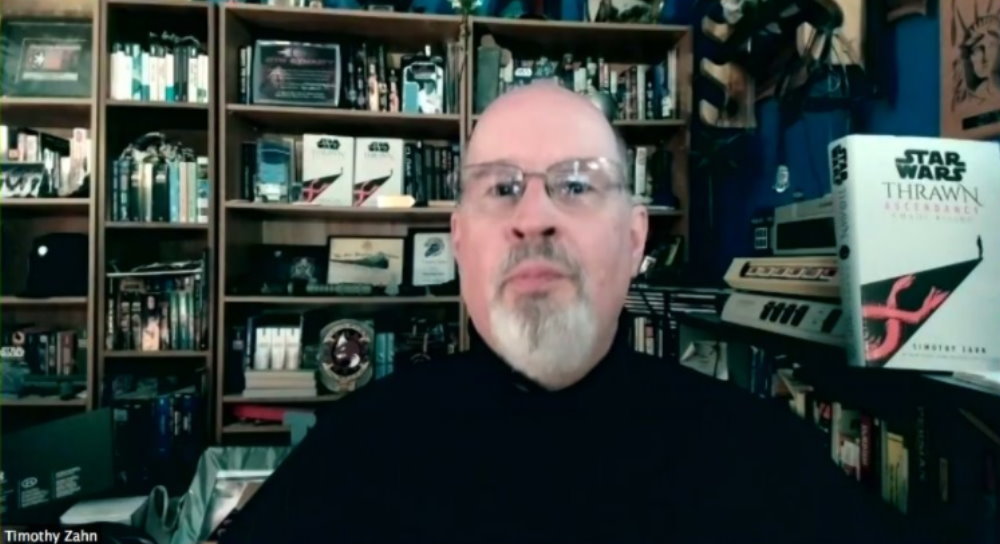 “He’s an outsider everywhere,” Zahn said. “He’s not a loner per se, but only certain people will understand him—or are comfortable with him to do things right.” Zahn even went so far as to describe Thrawn as “the million dollar bet on the roulette wheel” to the MITTH family.

Political favors, unique space battles, family drama, and more come up in the discussion and the book, so if you’re a Thrawn fan you should check out the interview in its entirety on Powell’s Books’ YouTube channel on Monday or Tuesday of next week; we will bring that video here to the site.

And keep this tidbit tucked away—according to Zahn, the Chiss do not wear khaki shorts.

Star Wars: Thrawn Ascendancy (Book I: Chaos Rising) (Star Wars: The Ascendancy Trilogy)
$20.28
Buy on Amazon This is a paid link. Learn More. Clicking the link may take you to the Amazon store servicing your country Price incl. tax, excl. shipping.  Details correct as at: 2021-05-10