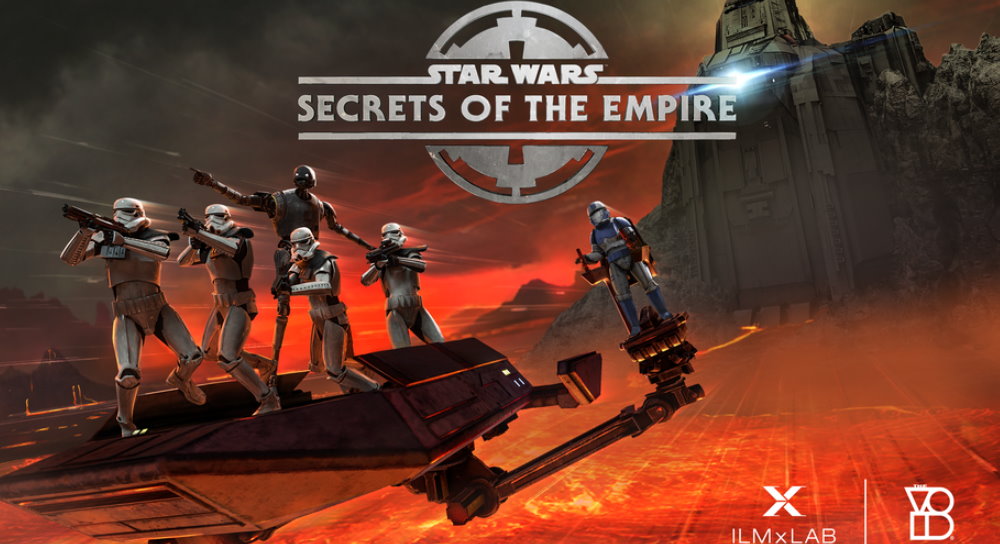 A galaxy far, far away needs your help. In teams up to four, be transported with family and friends in an immersive experience from Lucasfilm, ILMxLAB and The VOID.

Under the orders of the budding rebellion, your team will travel to the molten planet of Mustafar. Your mission is to recover Imperial intelligence vital to the rebellion’s survival. Alongside the pragmatic droid K-2S0, your team must navigate through an enemy facility walking into danger at every turn. Disguised as stormtroopers, grab your blaster, solve puzzles, and fight giant lava monsters in an effort to fulfill your team’s orders.

Produced by: Lucasfilm, ILMxLAB and The VOID
$30.95 per person

If you ever get the chance to do this GO! Those times when you ache to live in the Star Wars galaxy WILL become reality! 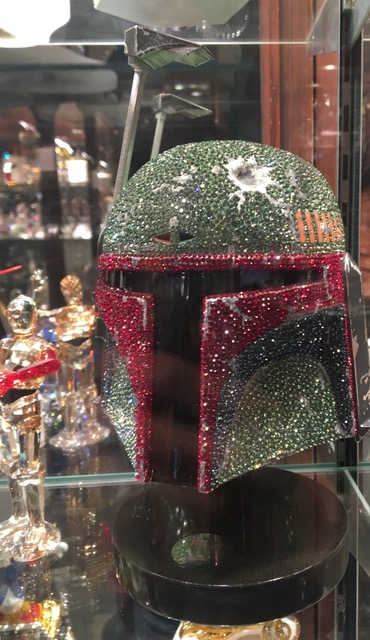 My sister came to visit me here in SoCal, a couple of weeks ago. Not lucky enough to get reservations for Galaxy’s Edge, we rode Star Tours and Hyperspace Mountain, visited the Launch Bay, and gawked at Swarovski Crystal Star Wars action figures and encrusted Boba Fett and stormtrooper helmets at the Crystal Palace — but it wasn’t comforting enough.

Participating in The Void’s Star Wars: Secrets of the Empire hyperreality (my 5th, her 1st time) helped ease the sting of being excluded from Galaxy’s Edge — and no reservations needed!

This experience feeds your fantasies of firing blasters, visiting Mustafar, flying with K2-SO, traveling through hyperspace, and facing a very formidable, Force-strong enemy. And I really mean living it! The effects are so immersive that you will be completely convinced it is reality! 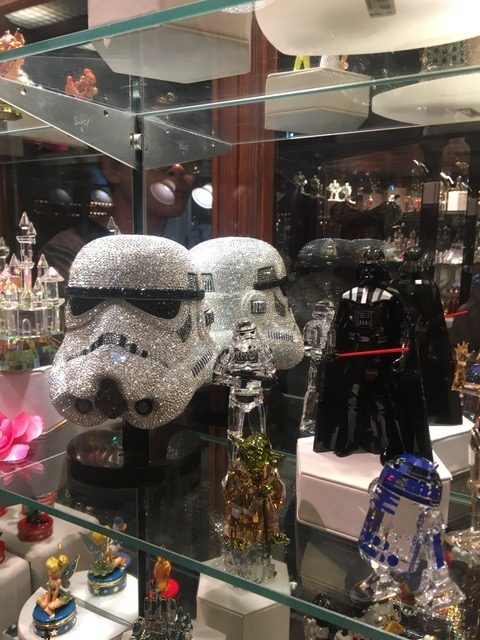 It begins with you being put in a team of 2, 3 or 4. After signing a waiver, you get a wristband, and the staffer has you “use the Force” to slide open a big door. Inside, Cassian Andor appears on a big screen and relays a message: a mission to retrieve a vital object to help the Rebellion. You must disguise yourself as a stormtrooper to get access to where the object on Mustafar.

After scanning your wristband QR code on a tablet and selecting your armor color, you’re taken to the next room and given a locker to store your stuff. Vests and visors hang from hooks. They explain how to don the vest so it properly supports the VR equipment. You are handed your helmet with VR visor (the visor fit comfortably over my glasses — no smashed lashes or foggy lenses) and told to lower it momentarily so it can calibrate to your line of sight. Headphones and a mic are also attached to it so you can talk with your team. The vest is unhooked and the weight of the equipment rests on you (my 11-year-old had no problem moving under its weight). 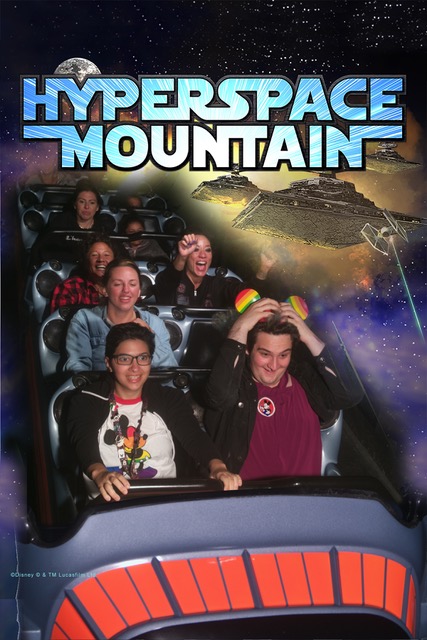 The next room has an R2 unit sitting in the corner. You are given your final instructions, a safety signal in case you get dizzy or have problems, then told to put down your visor.

And with that simple action, your reality becomes that galaxy far far away! “Oooohs” and “aaahhhhs” and “no ways” and giggles and “this is so awesome!” emanate from you and your teammates. You are completely convinced that you are on a ship, looking out into space, with K2-SO preparing you for the blast-off and a Rebel pilot at the helm. K2 tells you to sit; you get more details on your mission, then you travel through hyperspace! Your entire body experiences this sensation the same way it does on Star Tours.

You land on Mustafar and K2 sends you out onto a levitating skiff. You feel the heat of the lava and can turn all the way around for a 360 view of Mustafar! You even feel that you might fall if you take a misstep on the skiff as it moves to the station. (When you do step too far, the visor stops the illusion and all you see is a mostly blank screen)

K2’s voice guides you into the station. A lever appears in front of you and when you reach for it, it is real, you feel it in your hand and pull it down. It opens a door to a new room and blasters await you. We all cheered at the sight of them and, once in hand, we started firing at the ceiling to test them out. The laser blasts made sparks fly as they hit the ceiling.

Spoiler Alert! Stop here, if you are planning to go and don’t want to know the details of the mission that go beyond what’s shown in the trailer.

And now the station is alerted to your presence. You exit the room and feel the heat as you are on a walkway over lava. You feel tiny shocks as stormtroopers fire at you from across the lava, so you get to fire back. Lots appear, so everyone on the team has to participate to defeat them all. Then lava monsters come at you, so you blast them, too!

A door opens to two small connected rooms. You’re behind windows, and there are control panels with colored buttons. A sequence flashes on the control panel, and you need to repeat it to open the next set of doors. It’s like playing Simon. With two control panels (one in each room), more than one person gets a turn. Stormtroopers appear through the windows and start firing at you. So at least one of you needs to provide cover as your code breaker(s) work the panel. 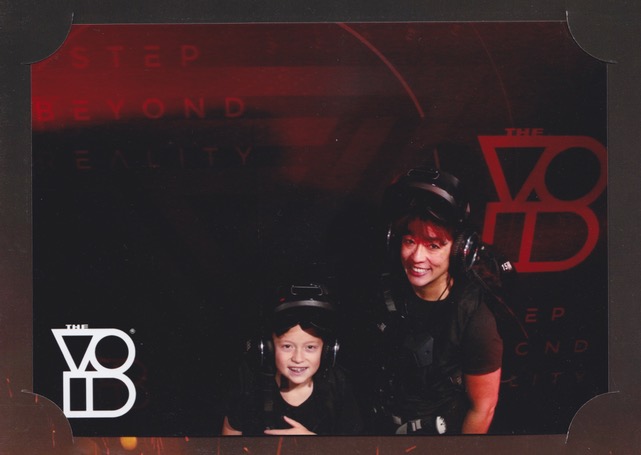 Having a younger person with fresher memory and recall skills can help you get through this part. But if you struggle, blasting the control panel eventually gets the door open. Just be prepared to be heckled, mercilessly, by K2. The next room is a cargo bay and, across the way, is the object you are there to retrieve. Your rebel pilot companion is there to grab it. There are more troopers to blast but not for long.

Then you hear it. That distinct breathing. The Rebel pilot’s now lifeless body releases the object as a red glow of that lightsaber and Lord Vader emerges from the darkness. I cheered, at first, but then felt real fear. Despite my love of the dark side, my body and mind believed that I was in imminent danger. With my teammates, I started firing my blaster at Vader until he used the Force to render our weapons useless.

K2 gave us instructions over our headsets on how to run back to the ship. On the hyperspace ride back to reality, we cheered and repeated with much more intensity, the “no ways” and the “so cools,” and other inadequate phrases to describe what we just lived. 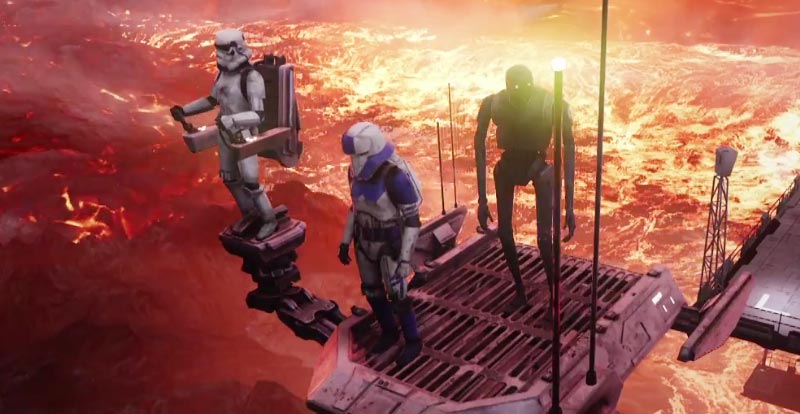 So you can understand why I’ve done this 5 times. The first time, I went solo, not sure of what I had signed up for. Then, I had to bring my son; he’s not much of a Star Wars fan (I know, parenting fail!), but he loves video games, and this is a living videogame! My son begged to go again so that was my 3rd time. The 4th time, I brought my Star Wars BFF (and devoted gamer).

A few negatives: 1) I am ashamed for firing at Vader instead of defending him (ruining my Sith cred); 2) when you look at your own armored self, sometimes it can be a little glitchy 3) the whole experience is just too short! The immersion in hyperreality is only about 15 super-awesome minutes. But I imagine the thousands of hours that went into creating it.

In total, it’s about 30 minutes from check in to having your amazement captured in a commemorative photo ($10 for a print and emailed version) to leaving the venue. You walk out with huge eyes, an open-mouth smile on your face, babbling and gesticulating, searching for the best words to describe one of the most awesome experiences ever!

How big is the potential market for virtual reality experiences like Secrets of the Empire?

The Void’s ‘Star Wars: Secrets of the Empire’ opens in Las Vegas