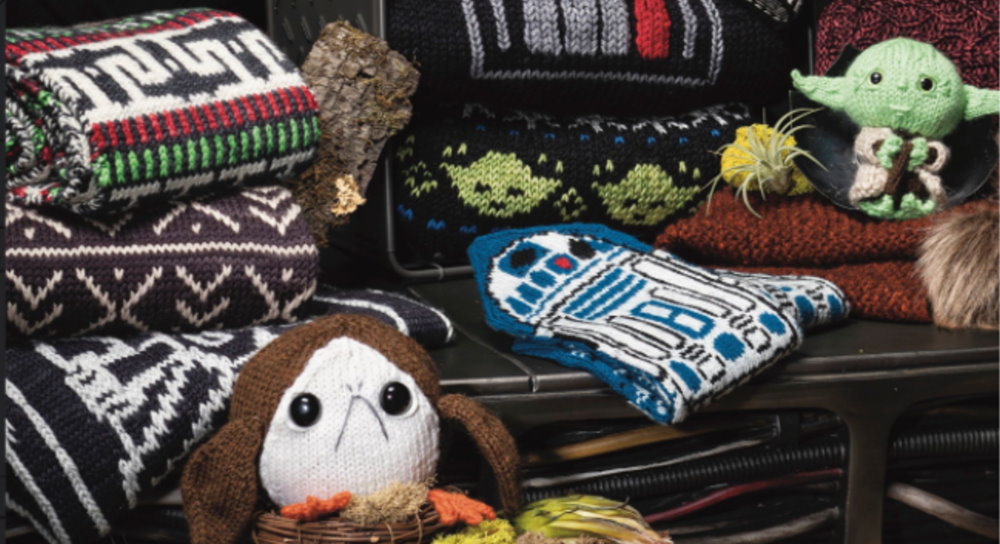 Featuring 28 projects based on George Lucas’s epic film saga, Star Wars: Knitting the Galaxy is the ultimate guide to creating stunning projects inspired by Luke Skywalker, Darth Vader, Rey, and a whole host of droids, ships, and aliens from a galaxy far, far away.

Bring the power of the Force to your needles with the first official Star Wars knitting pattern book.

Projects range from simple patterns like the Ewok Hood (sized for both children and adults!) to more complex projects like the Darth Vader Pullover. It even includes patterns for knitted replicas of a few iconic costume pieces, such as Luke Skywalker’s cropped flight vest from Episode IV A New Hope and Rey’s vest and arm warmers from Episode VIII The Last Jedi.

With projects for knitters at all levels and a variety of techniques to practice including: stranded colorwork, double-knitting and lace knitting.

Star Wars: Knitting the Galaxy is the perfect book for knitting fans across the galaxy.

The Star Wars galaxy is an all-inclusive space, with interests covering the gamut of hobbies, timeframes and skill levels, to say nothing of the multiple entry points for fans of all ages. That said, when it comes to knitting, beyond being able to slowly knit wobbly-edged, single colour squares as a kid for my aunts throw and knowing the most basic stitches, my knitting knowledge is practically zero, so I entered Knitting the Galaxy with some trepidation; how could I write a review, other than noting the excellent design and layout from the team at Insight Editions? It turns out there’s more here for a knitting newbie than you might imagine.

From the introduction, Tanis Gray makes it very clear that this is a book aimed at anyone who wants to knit, whether they’re an expert, an intermediate or a complete beginner. It doesn’t matter your proficiency, you can knit something that evokes or celebrates the saga, and as your skills develop so the detail increases as you learn new techniques like cabling, double knitting and colourwork. You might kick off wondering how you can turn a corner or make a circle; by the time you’re done you’ll be bobbing and weaving like a pod racer.

The book is smartly broken into sections, starting off with toys and moving onto costume replicas, inspired apparel and home decor. The first toy is a Porg, and while the pattern may look daunting – to the untrained eye imagine turning a page of computer code into a native Ahch-To animal with a ball of wool and some needles – patience and the helpful notes provided will eventually knit your first galactic creature, and darn if it isn’t fun. It may take some time to get into the swing of it, and following those instructions is essential, so finding someone who has some knowledge of knitting may be a smart move to get you started, but there’s always the sidebar of behind the scenes information to browse through while you take a break.

It really is a lovely book, dropping knowledge and stitches while spinning charming yarns from the galaxy far, far away as you craft your own costumes (Leia’s Hoth snowvest is gorgeous, as is Padme’s episode 2 ‘Battle wrap’), knit your own menagerie (mini Yoda is particularly cute while the Death Star is bigger and more substantial than you might expect) or head to the inspired apparel section, which is a treat (I am totally finding a pal to knit me an Order of the Jedi pullover in….well, let’s just say a bigger size than the one in the picture); either way you’ll have a ball making it.

Every corner of the saga is explored, from the prequels (Chancellor Palpatine scarf, Anakin’s infinity cowl) to the original trilogy (the stunning Rebel Alliance shawl, Luke Skywalker’s flight vest) and on to the sequels (BB-8 throw blanket and the General Leia Organa pullover), so fans of all areas of the saga are satisfied, but equal to the craft, skill and energy in these pages is the fact that this isn’t just a knitting book about Star Wars, it’s every bit as much a Star Wars book about knitting, and while that may seem to be a pedantic observation I don’t believe it is; this book celebrates the love of the Force as much as it celebrates the love of the stitch, and in an ocean of Star Wars books, this is a purl.

Star Wars: The Rise of Skywalker
$19.99
Buy on Amazon This is a paid link. Learn More. Clicking the link may take you to the Amazon store servicing your country Price incl. tax, excl. shipping.  Details correct as at: 2021-04-15
Bestseller No. 2

Star Wars SW BL Oklahoma
$22.99
Buy on Amazon This is a paid link. Learn More. Clicking the link may take you to the Amazon store servicing your country Price incl. tax, excl. shipping.  Details correct as at: 2021-04-15
Bestseller No. 3

Star Wars: Battlefront - Standard Edition - Xbox One
$19.99
Buy on Amazon This is a paid link. Learn More. Clicking the link may take you to the Amazon store servicing your country Price incl. tax, excl. shipping.  Details correct as at: 2021-04-15
Bestseller No. 4

Star Wars: A New Hope
$19.99
Buy on Amazon This is a paid link. Learn More. Clicking the link may take you to the Amazon store servicing your country Price incl. tax, excl. shipping.  Details correct as at: 2021-04-15
SaleBestseller No. 5

Star Wars Skywalker A Family At War
$20.99
Buy on Amazon This is a paid link. Learn More. Clicking the link may take you to the Amazon store servicing your country Price incl. tax, excl. shipping.  Details correct as at: 2021-04-15
Bestseller No. 6

LEGO® Star Wars™: The Complete Saga
$2.49
Buy on Amazon This is a paid link. Learn More. Clicking the link may take you to the Amazon store servicing your country Price incl. tax, excl. shipping.  Details correct as at: 2021-04-15