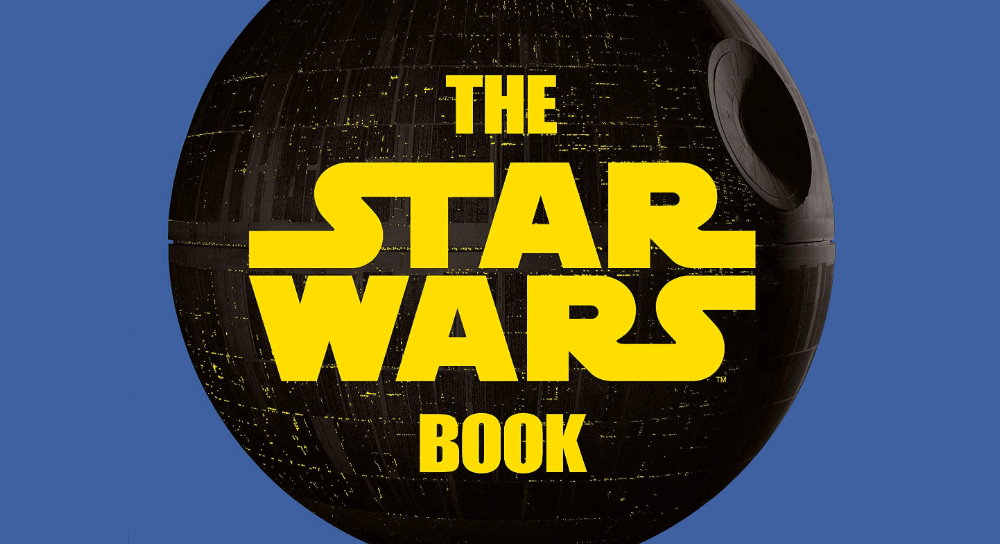 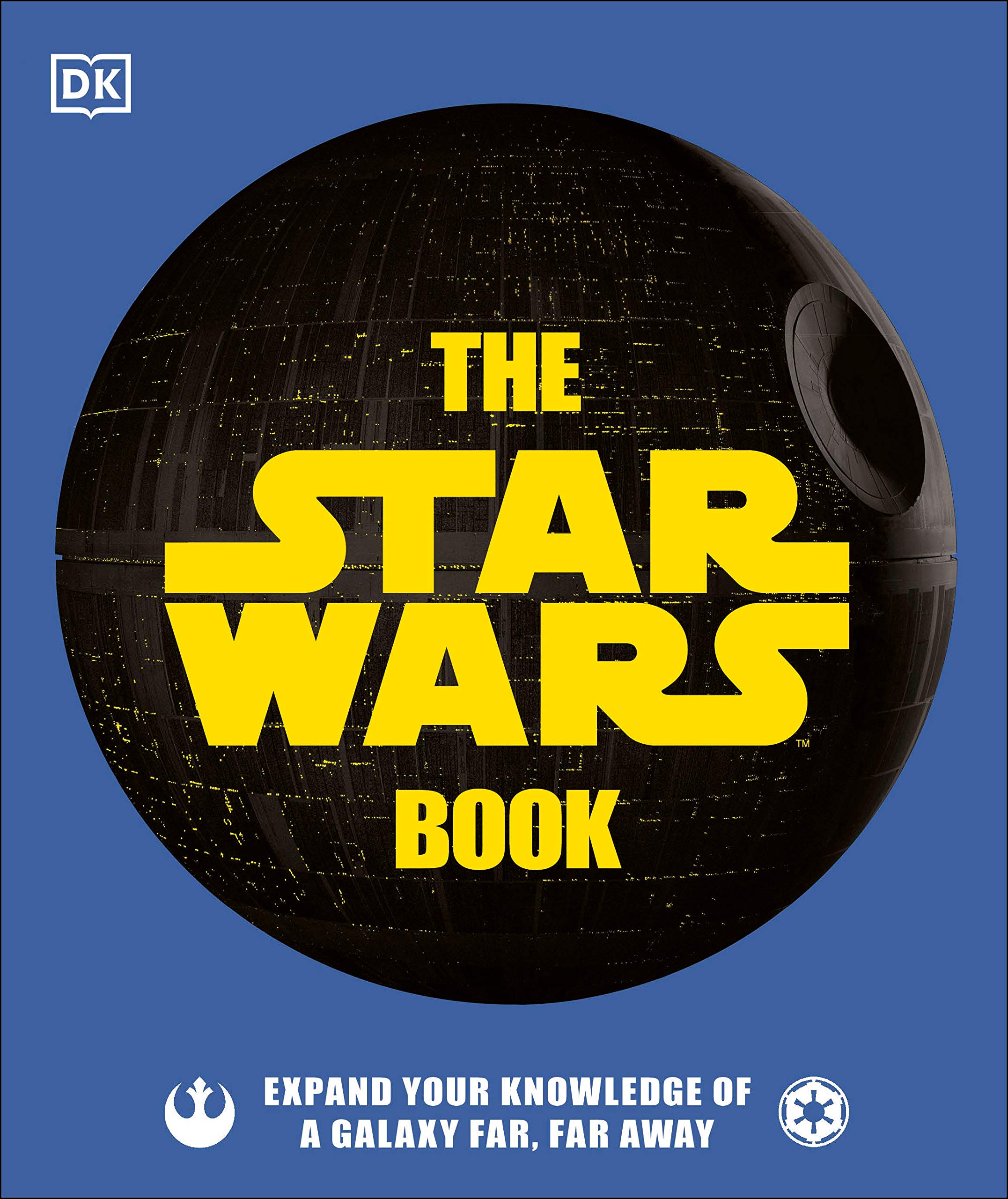 The Star Wars Book: Expand your knowledge of a galaxy far, far away

This is the Star Wars book you’re looking for.

If you want to comprehend the epic and intricate Star Wars saga, this is the book for you. It is a unique and insightful examination of this beloved franchise, including Star Wars: The Mandalorian, Star Wars: The Clone Wars, and Star Wars: The Rise of Skywalker.

Written by Star Wars experts, including fan-favorite Pablo Hidalgo, this book is packed with stunning film and TV stills, illuminating infographics and curated essays that reveal the mysteries of the Star Wars galaxy. From legendary heroes like Luke Skywalker and Leia Organa to fascinating species like the Wookiees and Tusken Raiders, this book explores the central characters, technology, governments, and events that have shaped the epic saga.

The book is divided into key subject areas – the galaxy, science and technology, the Force, the Skywalkers, galactic governments and their dissidents, and galactic denizens. Whether you are a devoted Star Wars fan or a casual reader curious to learn more, The Star Wars Book is an invaluable roadmap to this galaxy, far far away….

There’s a lot of information already out there in the galaxy, revealed in a plethora of books, presented in a variety of styles and ways all trying to teach us things about the galaxy far, far away that we didn’t already know. Some are substantial enough to reveal nuggets of info we take away, some too light to be much more than that weeks release of the week and occasionally – like this here release, The Star Wars Book: Expand your knowledge of a galaxy far, far away – it strikes the balance between being browsable and engrossing, delivering new information in a way that will appeal to long time Jedi Masters and younglings alike.

The book is smartly broken down into sections; science and technology, the Force, the Skywalkers, galactic governments and their dissidents and galactic denizens. After an fascinating introduction that walks us through the four decade and counting long history of the saga (almost 50 since Lucas first put pen to paper and started writing his initial drafts) from A New Hope right up to The Mandalorian, we’re diving into the galaxy with a current map of the galaxy (frustratingly not following the style of the maps from The Essential Atlas, the standard for Star Wars star maps) and including worlds from The Rise of Skywalker and details a timeline of recent galactic events from The Phantom Menace to the Battle of Exegol (thankfully reverting back to the ASW4 / BSW4 timeline, with the Battle of Yavin as year zero) that nails down when Luke Skywalker’s Jedi Academy fell and when Leia Organa started the Resistance. A brief look at the regions of the galaxy, from the Core Worlds (oddly no mention of the Inner Core) and out to the Outer Rim as well as the ever-expanding Unknown Regions and Wild Space and we’re away.

We look at a variety of topics. From the depths of hyperspace to the technology of lightsabers, the various types of starships to the multitude of superweapons which have plagued the galaxy, each page is littered with enough tidbits of info to keep you turning the page. The entry on the Force includes information relating to The High Republic (which all things being equal should already be with us) and not only looks at notable Jedi and Sith but also time periods including the dark times of the Jedi purge (including content from Jedi Fallen Order) and the Sith order.

The Skywalkers section is self-explanatory, giving us a deeper delve into the first Force family of the galaxy from the chosen one Anakin Skywalker to the new hope Luke Skywalker and the eternal hope, Leia Organa. Perhaps controversially it includes Rey Skywalker, a Skywalker by name but not by blood and details her incredible journey from nowhere to the belonging she found in a couple of years. 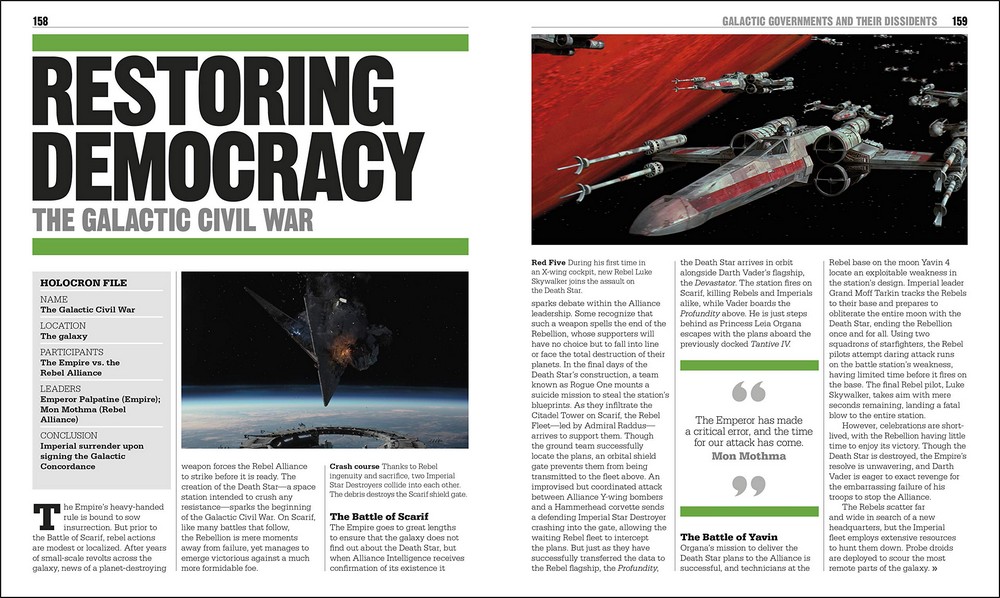 The section looking at Galactic Governments takes us right back to the formation of the Galactic Republic, the most modern iteration of the Republic, declared after the end of the Sith Empire a millenia ago. It doesn’t place the era of the High Republic in this graph, which is commonly known to be 200 years BBY, but does refer to it in the text. That only whets the appetite for what we have to come in fiction, as the Republic evolved into its best era before falling to the gears of commerce and bureaucracy by the time of the prequels. Later charts do refer to the pivotal Starlight Station ambush, a key occurrence in the High Republic era before going in-depth on the major players from all sides of the Palpatine era.

The books gives a satisfying wide view before diving deeper into each topic, and that’s where the treats lie. Dashing in information from not only films and TV but also books and comics, the major characters get a biographical update, folding in Star Wars Story information, sequel trilogy events and more besides, and puts into focus the changes that the new era has brought; we previously believed the Galactic Civil war ended at Endor, but in fact it ended a year later over the hot sands of Jakku. We get a look at Imperial Remnants, led by characters like Moff Gideon, and look closer at the factions of the sequel trilogy war (now finally given a definitive albeit (Ma)clunky name – The First Order/Resistance War).

We round off the book with a look at just a few of the denizens of a galaxy containing 400 billion stars and 3.2 million habitable worlds, and while the galaxy has shrunk in terms of the time it takes to travel around it, the pantheon of planets, factions, characters and technology continues to grow. To contain that succinctly within 224 pages is some feat, but authors Hidalgo, Horton and Zehr manage to do it, making The Star Wars Book a far more essential purchase than first impressions might lead you to believe.

The Star Wars Book: Expand your knowledge of a galaxy far, far away
$14.19
Buy on Amazon This is a paid link. Learn More. Clicking the link may take you to the Amazon store servicing your country Price incl. tax, excl. shipping.  Details correct as at: 2021-07-31