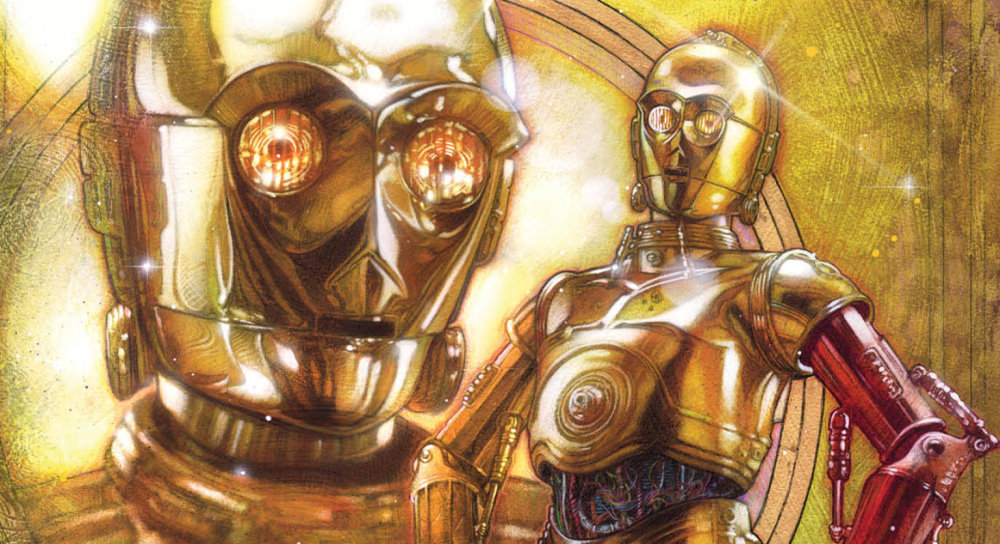 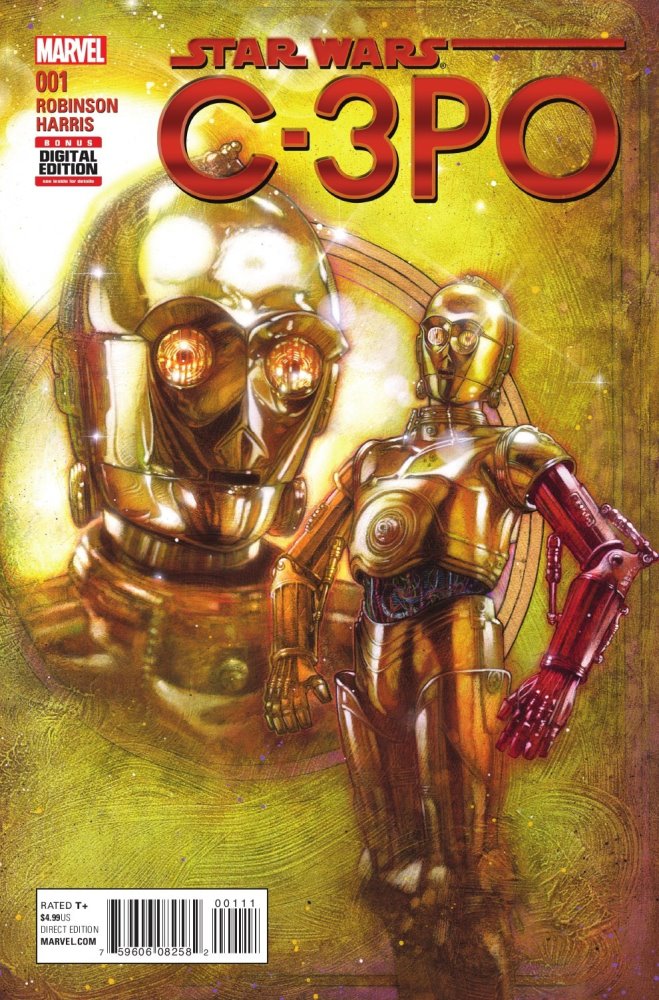 Follow everyone’s favorite protocol droid as he Journeys to Star Wars: The Force Awakens, in this special one-shot leading up to his appearance in the film!

Just how did Threepio get a red arm, anyway?

Find out here as the blockbuster creative team of James Robinson and Tony Harris of DC’s Starman reunite for the first time in nearly two decades!

You may be fluent in over six million forms of communication…but this book is a must have in any language!

There are so many questions unanswered in the sequel trilogy. How did Maz Kanata come to own Luke/Anakin Skywalker’s blue lightsaber? How did the Emperor make a comeback? And perhaps most importantly, why has C-3PO got a red arm in The Force Awakens?

Okay, okay, a red arm replacement on our favourite protocol droid was not the most pressing of questions to come from the Disney era of Star Wars, but did you know that Goldenrod had a one-shot comic that addressed the matter? C-3PO was released by Marvel just months after The Force Awakens was on the big screen. In this mini adventure, 3PO and a crew of resistance droids take up the mission originally being carried out by their human counterparts, but alas those of flesh and blood did not survive a crash landing.

The point of the mission – which takes place prior to the events of The Force Awakens – was to locate Admiral Ackbar who has been captured by The First Order. The droids that survived the crash included C-3PO and OMRI, a captive RA-7 protocol droid in the service of The First Order, who knows the whereabouts of Admiral Ackbar.

Now, to escape the planet they have crashed upon, they must make a long trek to find a beacon that has been detected by 3PO. It could be there way off the planet and back to the Resistance. Joining them on the quest are PZ-99 – a military grade security droid; a construction droid by the name of CO-34; 2-1B look-alike 2-MED-2 and VL-44, a diminutive security droid.

So what do we learn along the way? Well, the comic has been deemed canon and in it we discover that 3PO’s memory wipe at the end of Revenge of the Sith did not erase his memory completely. He has memories of memories, if you get what I mean? There are scant recollections of all three prequels, not much but just hazy enough for us the readers to know what he is reflecting on.

The journey from the crash site is lengthy, so along the way the droids philosophise about the very core nature of being a droid. About servitude. Ultimately, they concede that a droid is not a First Order droid just because he is in its service, neither for that matter is a Resistance droid.

It’s a similar lesson to that given to Finn and Rose by DJ in The Last Jedi. Arms dealers, as it transpires aren’t too fussy who they work for. In reality, this could be the case for droids too – especially when baring in mind the capacity to wipe a droids memory – well, almost wipe it. The route takes them across a bridge, and it is at this point that things take a dramatic turn. Tentacled aliens and insectoids destroy the majority of the party – all except OMRI and C-3PO, who loses an arm in the madness.

The two remaining droids make it to the crash site of First Order TIE-Fighters. One of the ships still has its beacon in place. Acid rain is pouring down corroding anything metal it touches. Time is of the essence.

When 3PO asks OMRI what they must do, OMRI transfers the location of Admiral Ackbar from his memory banks to 3PO. Is OMRI changing allegiance? No. It is an act of friendship. Genuine friendship towards C-3PO, but also defiance that he has been assigned a ‘side’ in the first place. OMRI explains that C-3PO has a mission and that he does not, so it is only right that he should make his way through the acid rain to divert the beacon to call Resistance ships.

Sure enough OMRI makes good on his promise, calling Poe Dameron and BB-8 to rescue Goldenrod a short while after the rain has ceased. OMRI’s circuits had been damaged in the downpour and by way of thanks, 3PO takes his ‘friend’s’ arm to replace his own. The once metallic grey arm has been corroded down to the red primer paint that we are so familiar with. It is worn in tribute, not only to OMRI, but also to the band of droids that shared that adventure.

Star Wars Special C-3PO #1
$14.99
Buy on Amazon This is a paid link. Learn More. Clicking the link may take you to the Amazon store servicing your country Price incl. tax, excl. shipping.  Details correct as at: 2021-05-10